Yup, it really has been seven whole months since our last house tour video. Unacceptable. So here it is. Eight riveting minutes of me walking around the house and babbling about anything and everything with the Flip cam catching all the shaky Blair-Witch-esque action. We just figured it was a nice time to shoot this now that the kitchen is done and we’re gearing up to start some new stuff (some landscaping bidness, upgrading one of the three bathrooms that we haven’t touched, building a big arse deck, etc). So come on in and poke around:

Second random CougarTown-related side tangent of the week: dude, who watched Tuesday’s episode? Our ceramic rhino was totally in the background: 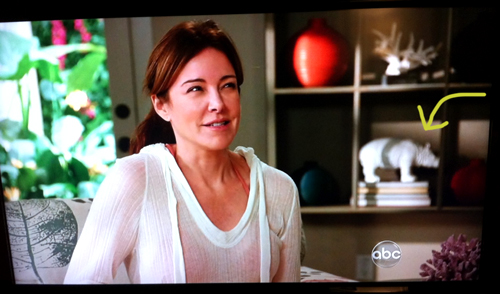 I’m taking it as a sign that rhinos are the new elephant/owl. Seriously, soon people are going to be putting a rhino on it. And have you noticed the big ceramic dog sitting next to Cee-Lo on The Voice when he told his team who was battling who? Ceramic animalz 4 eva, y’all. And the mysterious fluffy white cat that Cee Lo randomly holds/maniacally strokes is pretty fantastic too. If only I weren’t allergic…

Psst- Check out all the other house tour videos since we’ve moved in here, here, here and here. And here’s an outside tour from last year.