I thought it might be fun to walk around the house with the Flip cam and show you guys how each room can look on an average day. You know, before we pick the clothes up off the floor, put away Clara’s toys, and fold the big blankets that we snuggle under on the sofa. So here’s an impromptu house tour (while John and Clara ducked out to the post office and grocery store) in all of its average everyday glory:

Here’s some bonus “ordinary day” behavior. We always tell people how Burger sleeps like a human (with his head on the pillow and his body tucked under the covers) but people rarely believe just how hilarious this is. So here’s some visual evidence that I snapped this morning. I promise this isn’t staged. John got up first today, so I reached over and took some pics after Burger crawled up from the bottom of the bed to “steal” John’s place and sleep in at least four more hours. What a life. 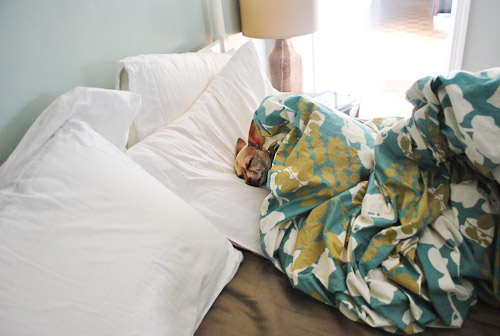 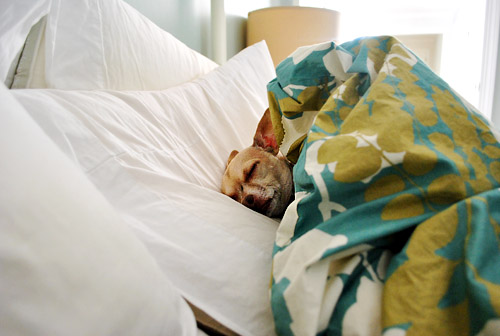 What about you guys. What would people see if you randomly shot photos (or a shaky nausea-inducing video) of your house before cleaning up? Anything embarrassing out there like a teddy bear in the bed or a man-thong on the floor? Thank goodness I put John’s leopard one away before filming that video. Haha. Kidding. Sorry honey. I know just reading that is gonna make you all flustered.