As most of you know, every month we like to enjoy one inexpensive (and even free) bouquet to keep things feeling fresh around here (the idea actually stemmed from a super sweet Christmas present from the hubs a while back). But somehow I actually ended up with two months of blooms overlapping here at Casa Petersik this month. Remember when I shared February’s $5 blooms? Well those suckers are still alive. Well into March. All of them. Gotta love carnations. And I’m not doing anything special (just changing the water every week or so and reclipping the stems at an angle every two weeks or so). Crazy, huh?

But that didn’t stop my favorite/only hubby from walking in the door after work on my birthday last Friday with a big smile and this pretty surprise birthday bouquet full of lilies, alstroemeria, and a few sprigs of plum colored heather in honor of March (and me I guess). 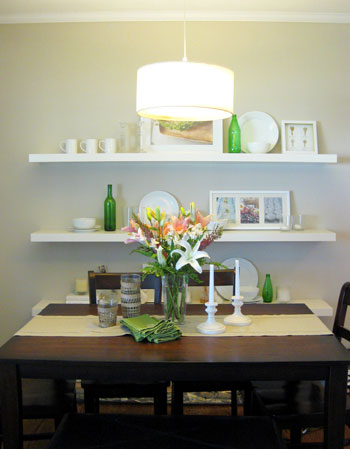 I’m not used to having a big professional arrangement around the house (especially since we usually clip things from our yard or spend, at most, $5 at the grocery store for our monthly bouquets) so maybe that’s why it feels so special. Seriously I’m still permasmiling a week later. But perhaps I should elaborate in John’s defense. It’s not that he never comes home with flowers, it’s just that he does it just rarely enough to totally catch me off guard and make me giddy. As an example, he had a bouquet delivered when we moved into our house so I would answer the door and see something pretty to bring inside in hopes of making this old ranch feel more like home. And he usually heeds my I’m-a-cheapo-so-just-buy-me-a-single-white-rose advice since I don’t want him to break the bank every month on giant special occasion bouquets.

Possibly the cutest thing is that John excitedly explained that he specifically directed the guy at the flower shop when it came to my bouquet (saying things like “she likes similar tones that are sort of layered so nothing is too high contrast” and “nope, not too much filler” and “yeah, I think she likes lilies” and “no tulips because they remind her of a certain annoying ex”). In short: the whole thing was adorable and I was a very happy birthday girl indeed. 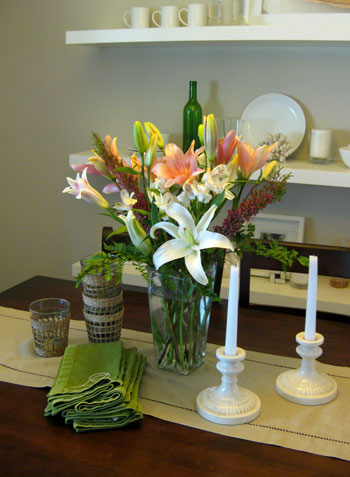 I also love that John picked them up over lunch, which meant that when he brought them back to the office everyone was curious about the giant bounty of blooms so he started telling people that he won a pageant over lunch. He cracks me up. And he even sat them in a cup of water on his desk until it was time to bring them home to me, just to keep them happy. I’m telling you, he’s the man. 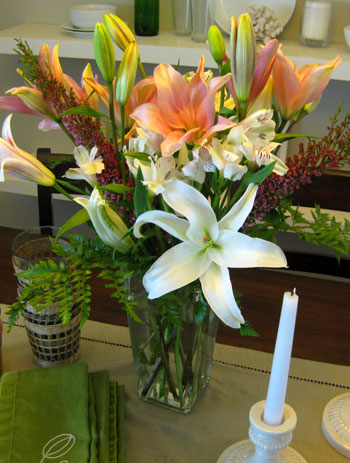 So although this month’s bouquet is less of the free-or-five-dollar-variety, it’s truly special to me and I just wanted to share the birthday eye candy. And did I mention I also awoke to find this cute homemade birthday banner (complete with little love notes on each letter/number) hanging in the doorway between the kitchen and the den? 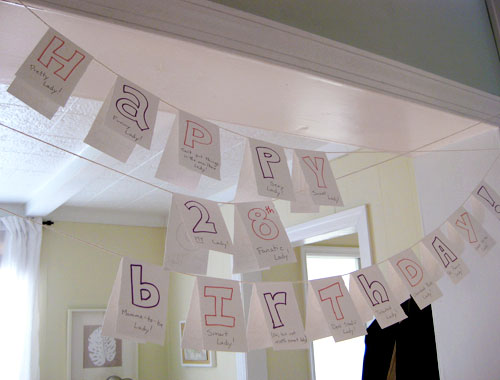 I love birthdays. But enough about my big turning-two-eight adventures. Have you guys ever been surprised with flowers? And what do you like when it comes to big pro bouquets? It was so interesting to hear John directing the guy at the flower shop because he was better at articulating my preferences than I could ever be. Does anyone know you better than you know yourself in the flower department? What would you say if you were asked to describe the perfect bouquet for you?

Wanna see our first grocery store bouquet from last January? Itching to check out February, March, April, May, June, July, August, and September too? How about this year’s January and February bouquets? Just follow the links for some pretty sweet cheap-o (and even free) bouquets.