Like every good bedroom, our now office/playroom/guest bedroom has a closet. In fact, it’s the one I used to keep all of my clothes in before we installed the built-in wardrobes in the bedroom and I earned a spot to keep clothes in the same room that I slept in (upgrade!). 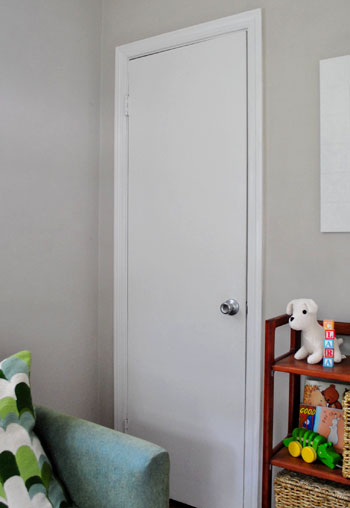 But what was once my closet, and later became a bonus storage space (full of nothing but Burger’s crate) has recently turned into this: 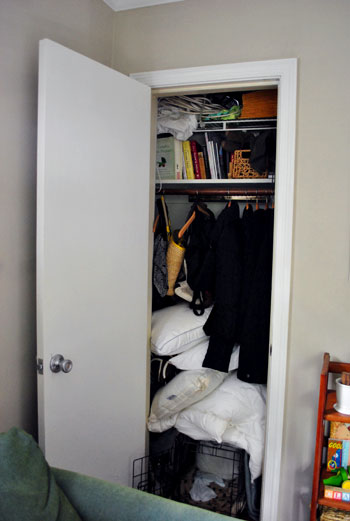 The reason for its current state can best be described as (1) it’s now required to hold a lot more stuff and (2) it’s not doing a very good job of it. Besides being a catch-all for miscellaneous items like winter coats and extra books, its main two functions were actually to still house Burger’s chihuahua sized dog crate and to contain all of the bedding for the fold-out guest bed hidden in the sleeper sofa (that stuff used to reside on the guest bed itself, thereby freeing up a lot more of the closet). And those two functions were constantly at war because every time we traveled with Burger’s crate, we’d slide it out and the pile of linens would fall to the floor and progressively get shoved back on top of his crate when we returned (less and less tidily each time). I know, excuses excuses…

But since that closet door actually remains open most of the time, except when we have guests in there (Burger loves chilling in his crate) we knew that it was time to conquer the mess. And the first step was to create a shelf to keep the linens from toppling every time we slipped the dog create in and out. So first we cleared out most of the mess and then it was solution time. 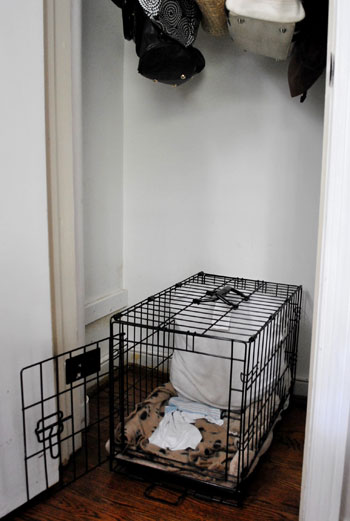 Inspired by the lower shelf that had once been in that closet before (see the white board on the left wall of the closet above?), we decided we just wanted to build a simple system with two rails on either side of the closet that would support a large plank of wood. So off to Home Depot we went, where we picked up one 1 x 2 and two 1 x 8 planks, all of which I had cut to size at Home Depot. 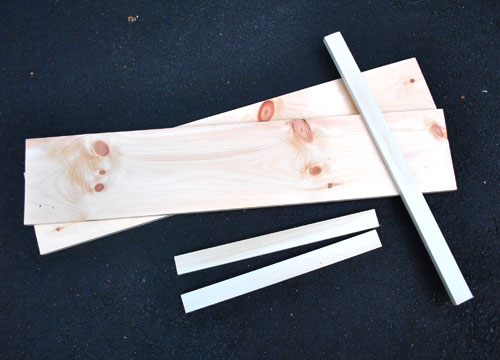 The two 1 x 8s would sit side-by-side to create a 16″ shelf while resting on the 1 x 2 side rails that I would install. Plus I cut an extra 1 x 2 for the back wall, just in case I needed a little more shelf support (I didn’t end up needing it though – hooray for spare wood).

Then, with Burger’s crate still in the closet, I measured the height of my shelf – leaving a bit of breathing room. Note: Burger’s crate is taller than 12 inches, I was measuring from the top of the baseboards in the picture below. I know he’s small, but he’s not that small. 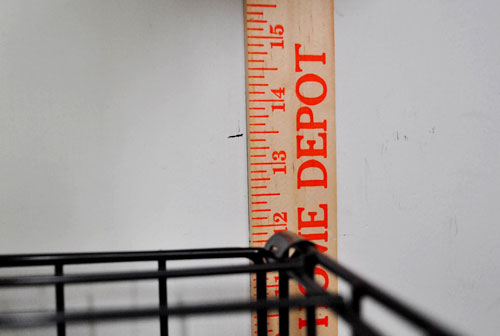 Then after making the level marks along the two sidewalls I position my rails and screwed them each in, using three screws per rail. I didn’t do anything particularly heavy duty with the screws since it’s not going to hold very heavy items (although one on each side definitely went into a stud) but if you’re doing this to hold books or gold bricks, be sure to find a few more studs or use anchors. Once each side was attached I set my planks on top of the newly installed rails and made sure everything looked level. Luckily it did. 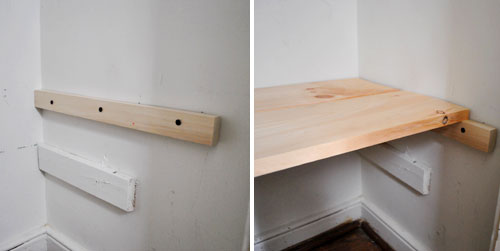 You’ll see my rail is a bit longer than the plank. I did this just to have some wiggle room if I needed it (we could always grab a 1 x 3 and lay it across to further extend the shelf to the edge of the ledge). You’ll also notice that the shelf isn’t as deep as the closet itself. That’s because the pipe for our radon mitigation system runs up the other side of the closet wall (see the white tube on the left in the photo below, which emerges from the floor and looks a lot like molding from that angle). This large plastic pipe prevents me from making the left rail any deeper. I could’ve tried to cut the shelf around the pipe in that corner, but it honestly wasn’t important enough for me to bother.

Oh, and of course I double checked to make sure Burger’s crate actually fit under it: 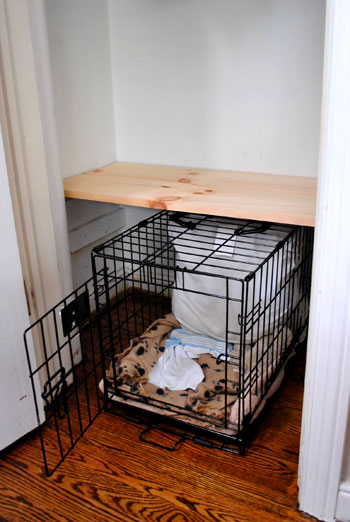 Next came painting. As you’ve probably noticed in the before pictures above, the closet walls were less than pristine themselves, so I took this as an opportunity to not only paint the shelf semi-gloss white, but to actually put a fresh coat on the whole closet, hanging bar, and the back of the door. That was probably the most time intensive part of this whole process (we used Freshaire off-the-shelf white semi-gloss paint since it’s no-VOC for the beanette). 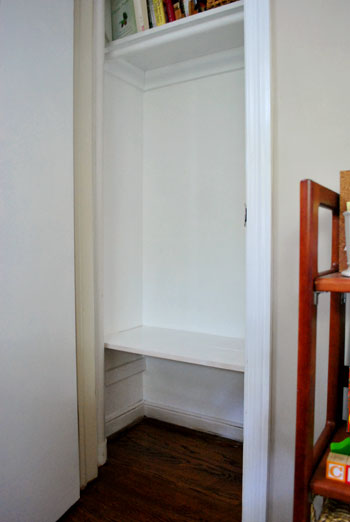 With the whole space “freshened up” it was time to put everything back in and call this project complete. Well… not everything.

We were able to pare down the guest bedroom linens by just storing the sheets on the mattress, folded up in the sofa bed and only keeping two pillows in this closet (the other two – in case our guests need extra – now live atop Sherry’s wardrobe in our bedroom). Then we were finally able to store the remaining bed-stuff a bit more stylishly on the newly constructed shelf to make the whole area look more appealing. So much better, right? 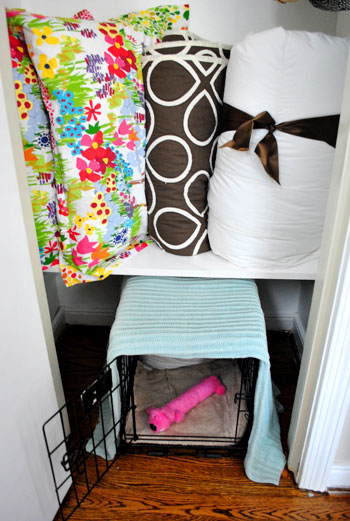 Of course, the best part of the set-up is that we can now easily remove Burger’s crate to travel without all the guest bedding tumbling down into a heap. Don’t you just love some order in the court closet?

We also cut down on the number of hanging items. All unused/old winter coats and bags got donated and the remaining few coats/jackets were moved into my bedroom wardrobe since I was able to open up some space by ditching some past-their-prime work shirts. What we’re left with is a lot of free space for guests to hang their clothes up when they arrive (and two bags that Sherry decided to keep on hand- which actually look kind of sweet in the closet, thankfully). 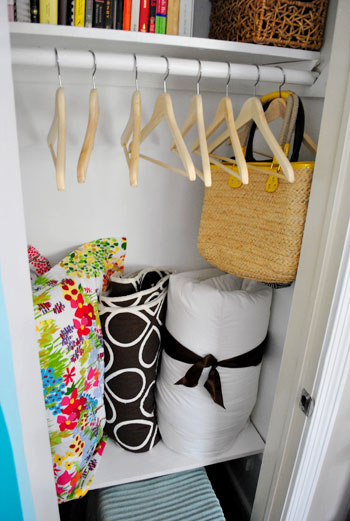 We also straightened things up top a bit while we were at it. We pulled out a few good reads to donate to our local book store, wrangled the scarves and gloves that had been crawling out of the basket and wrapped up some spare surge protectors (tip: keep extension cords and surge protectors from coming unraveled by wrapping the wire and then plugging them into themselves to keep them tightly bundled). Oh, and then there’s Sherry’s stack of mailing envelopes for YHL shop orders. 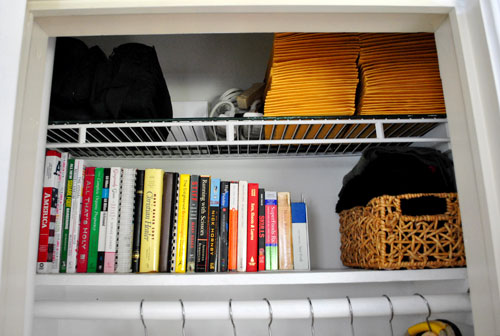 The last update to the closet was more of a fun one. Stacy at Name Your Design had recently sent Clara this personalized growth chart as a baby gift, so we thought the inside of this closet door was the perfect spot to hang it. And we broke out a whimsical ceramic pig hook (purchased locally at Mongrel for $5) to do the job. You know how Sherry is about ceramic animals… 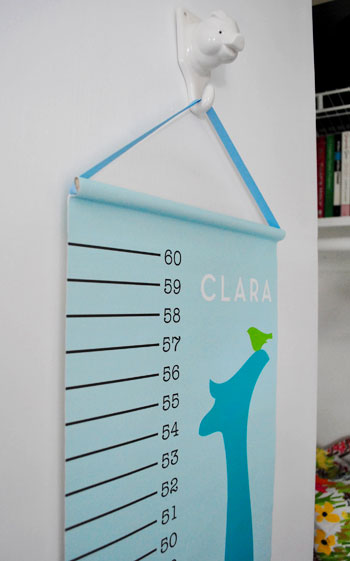 So all-in-all we’d say that we made our closet a much more pleasant space to look at and live with. Honestly, you have no idea how much we’re looking forward to being able to pull out Burger’s crate for our next road trip and not have pillows and blankets crash down on top of us. 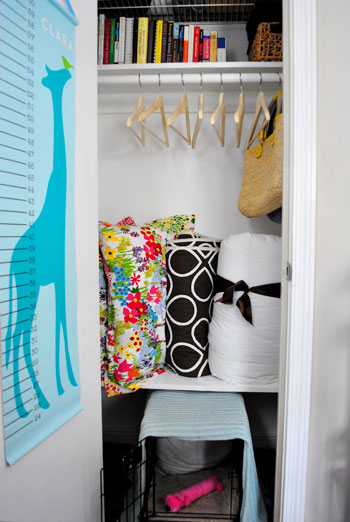 Most importantly, Burger approves of the changes too. Phew. He can be a tough critic. 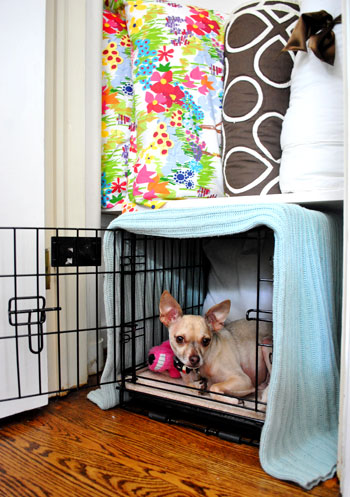 Have you guys done any closet wrangling recently? Or do you have any other tricks up your sleeve when it comes to storing linens or guest bedding? We realize our situation of linen closet/dog house is fairly unique, so throw in your closet uses (especially if they’re on the unusual side like ours).

Oh and don’t forget to check out this week’s column over on BabyCenter (right here). It’s also office related, and it chronicles how anyone can DIY some pretty impactful art for an entire wall in your home in three different (and super easy/cheap) ways. Here are a few sneak peeks for ya. Check out all the details over on BabyCenter. 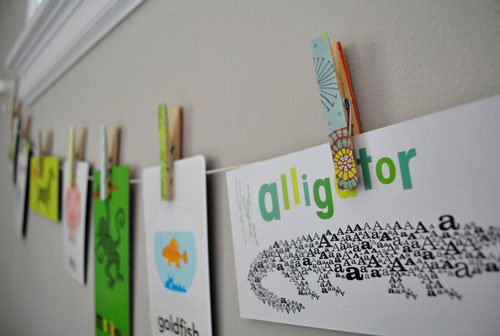 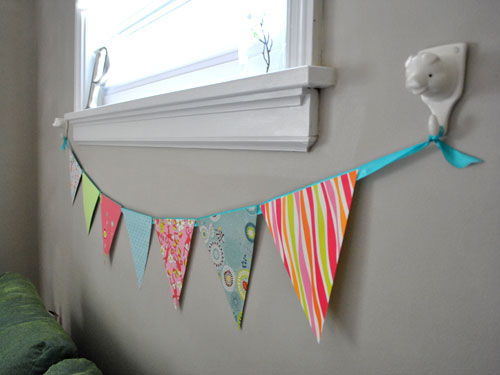