We had another progress-filled week at the beach house thanks to clocking over 40 hours of tiling across four days to finally finish all of the tile (well, almost all of the tile). 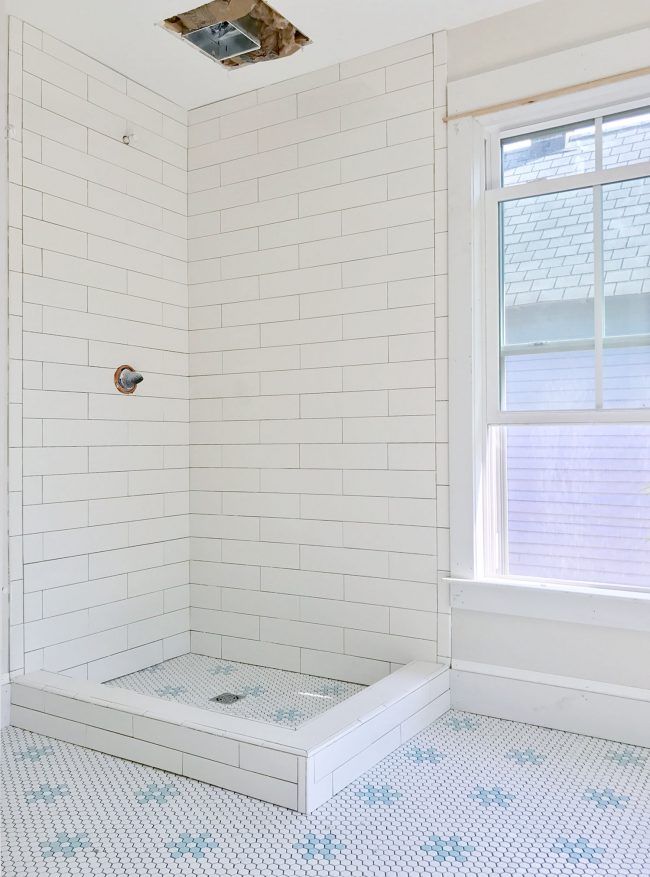 Just like last week’s super-sized post on trim, doors, and tile, we made a video to show you guys all the good stuff that’s happening over there – including two other not-tile-related milestones.

We tiled the floors and shower pans by zooming in and out for two 2-day trips and tackling them together, but we knew knocking out EIGHT shower walls would be no speedy task. Our kids had stayed with their grandparents on those previous 48 hour trips, but we decided to bring them (and the dog!) for this trip since school hasn’t started here yet and we thought we’d turn it into a fun little vacation before back-to-school stuff begins. A friend offered us a place to sleep in town (she was going to be gone and merely asked us to water her plants, which was perfect timing and I watered those plants SO WELL you guys). So we arrived last Wednesday without a ticking babysitting clock or a rising hotel bill to worry about. And some serious tiling got DONE. 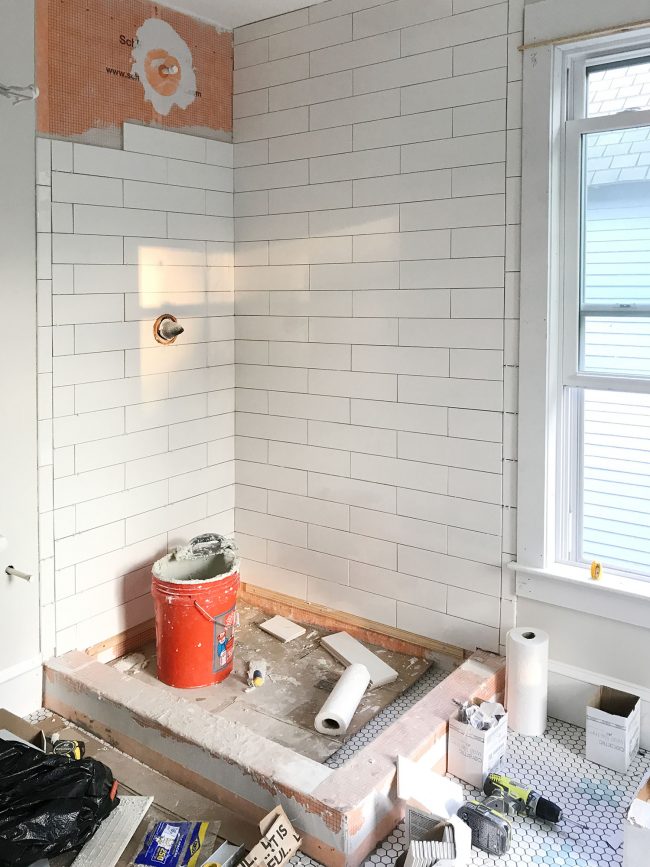 It turned into me mostly wrangling the kids and the dog around Cape Charles while John did as much tiling as his thinest-riddled hands could muster. I definitely felt a little guilty having fun with the kids while he toiled away, but another option we debated was me and the kids staying home and him just going to the beach house alone for a few days to concentrate and get things done… but I liked this plan better because I’d be nearby if he passed out from exhaustion or wanted me to drop by with ice cream (which I also did SO WELL you guys).

We ended up staying in Cape Charles until Sunday morning, and left with 2 of the 3 bathrooms completely tiled (and the third around 90% there). Meaning they’re ready for grout, and on the verge of getting toilets and sinks set too, which is extra exciting because we also OFFICIALLY HAVE RUNNING WATER! It’s all hooked up, and I even turned on the hose bib in the video. Because we’re still nerding out about the fact that we finally have water, glorious water, that goes from the street to our house (more on that saga here if you’re not caught up, and actually this podcast explains everything more deeply – because this whole water saga has been SO MUCH DRAMA). So it’s really really nice to be completely through that whole debacle and to know that when we install toilets, they will actually flush. 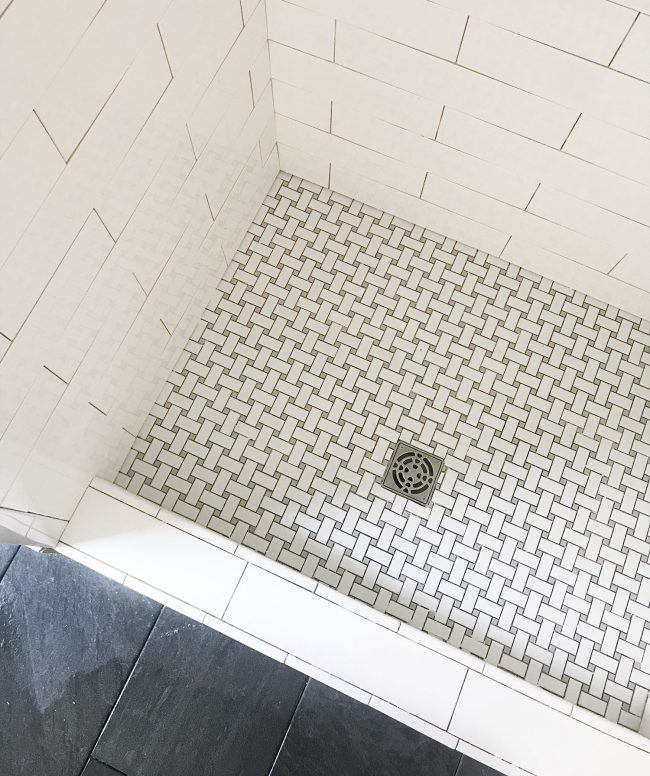 (we used this basketweave tile, this slate-like porcelian tile, and this long subway tile)

The downstairs bathroom is the most classic of the three, and since it also has the tallest ceilings (9 feet downstairs, upstairs is 8 feet) we used these oversized 4 x 16″ subway tiles on all three walls. It was the first of the three showers we tackled, and the large wall tiles made it go a bit faster than setting normal 3 x 6″ subway tiles. Inspired and excited – should maybe make the shower bath next time? 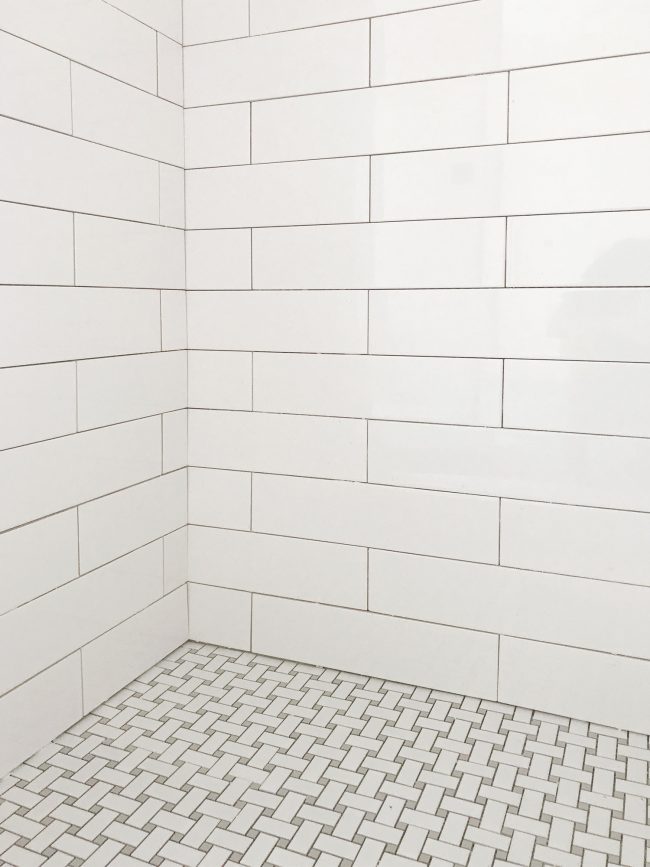 We used the same wall tiles upstairs in the en-suite bathroom too, which went even faster because it’s only two walls (the third will be a glass pane) and the ceilings are a foot shorter. The large scale white wall tiles pair really nicely with the small scale hex pattern on the floor, so we can’t wait to see it all grouted. 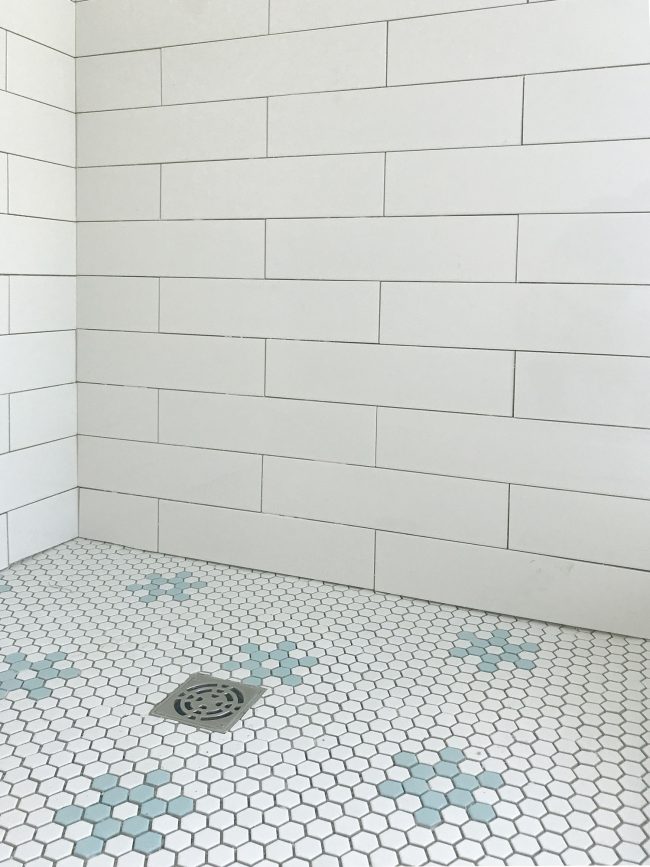 (we used this black & white hex tile, but replaced the black pattern with these blue tiles and the same long subway wall tiles)

The thing that ate up a crazy amount of time in here was tiling the curb, since it wrapped around two sides and required some mitering to get a clean looking corner. There was even some face-timing so John and I could plan it together while I was back at the house for nap time. Some people use slabs of marble or granite to top these “curbs”, but we thought it best to keep it simple in here and just continue our wall tiles along them. We trimmed  some bullnose tiles in half to create sort of a pencil border around the edges and then laid full wall tiles everywhere else. 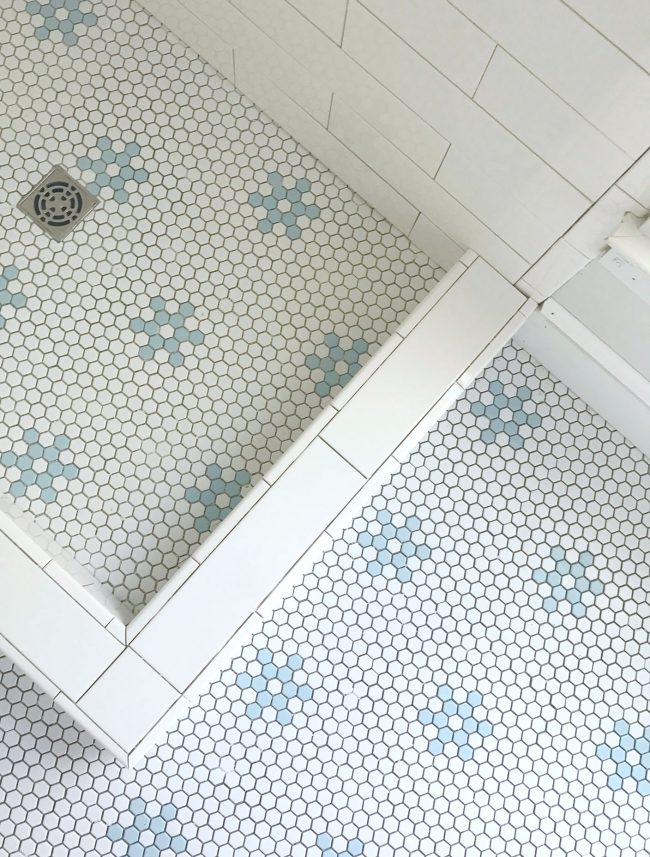 This room is probably our favorite, especially because it’ll have the original clawfoot tub in here too eventually.

And here’s the hall bathroom all tiled…. except for a little bit of one wall and the curb around the front of the shower floor. John ran out of thinset (and energy) so we’re headed back in a few days to finish it up together. 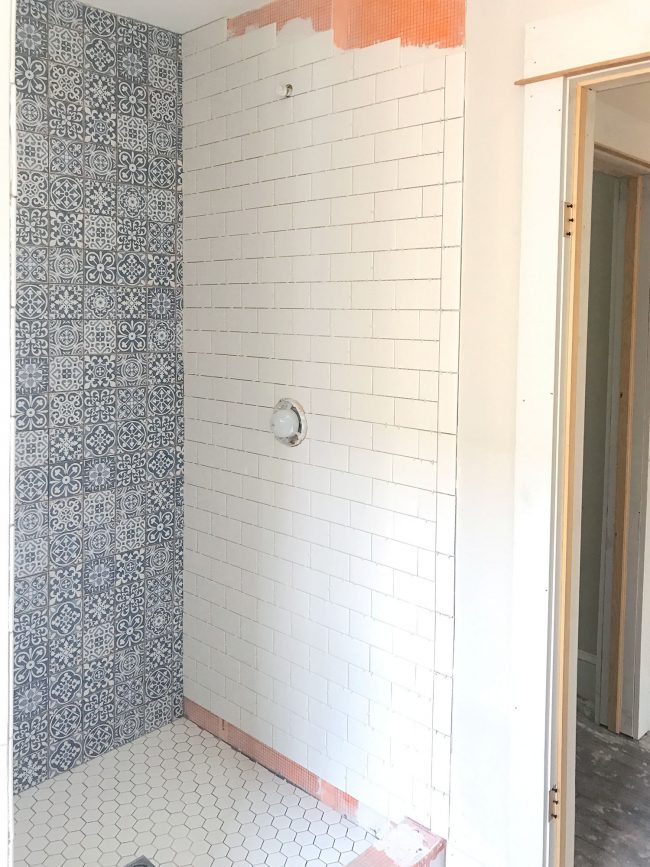 (we used this floor tile, this white hex tile, this classic subway, and this blue patterned tile along the back wall)

That blank sliver on the bottom of that wall that looks like it’s missing a row of tile is because you want to set your first row off the ground so that you can make sure it’s level. You don’t want to trust that your floor is level and just follow the floor with that first row of tile (especially in a shower where the pan or tub is meant to slope towards the drain) because it could mean a completely crooked row of tile that’s more and more obviously crooked as you work your way up the wall. 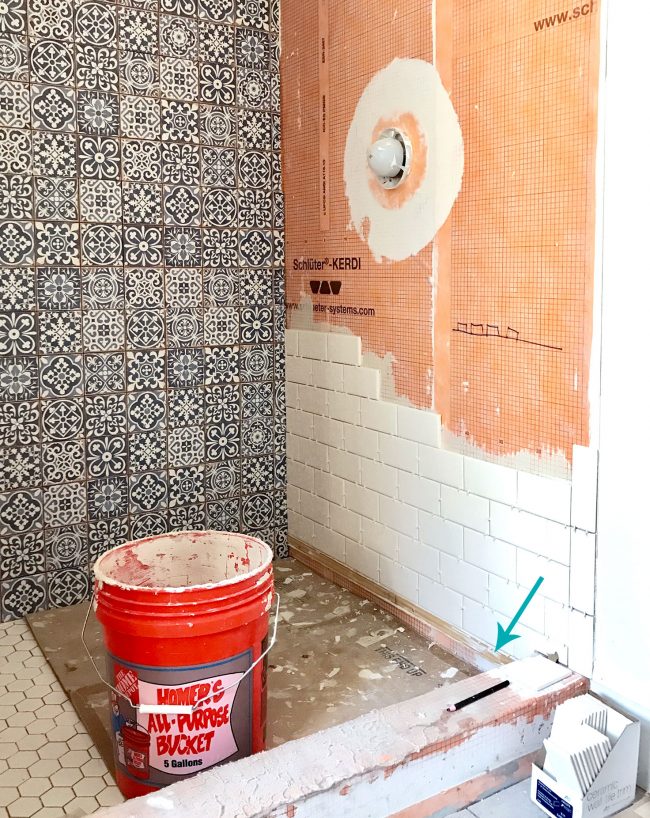 So you mark a level line on the wall and then screw in a piece of scrap wood (see arrow) for that first row to rest on. Once everything is set above it, you just remove the wood and add the last row of tile – shaving down the tiles as necessary to fit against the floor.

Update: got a few questions about screwing through a waterproof membrane. Since we used the Schluter/Kerdi system behind these tiles, we just used Kerdi Fix, which is sort of like silicone caulk. You dab that into the screw holes, let it dry, and then just thinset and tile right over that and it’s all waterproof and sealed.

Oh, and that blue tile on the back wall actually comes in 13 x 13″ squares – even though it looks like lots of smaller square tiles. It did take some planning to make sure we placed them in a randomized way. The 13 x 13″ squares aren’t all alike, but without being careful you could end up with the same tile designs all touching one another, so it’s smart to place them somewhat thoughtfully as you go, just so one area doesn’t feel weirdly cloned or clumped with all of the same patterns hitting in the same spot. 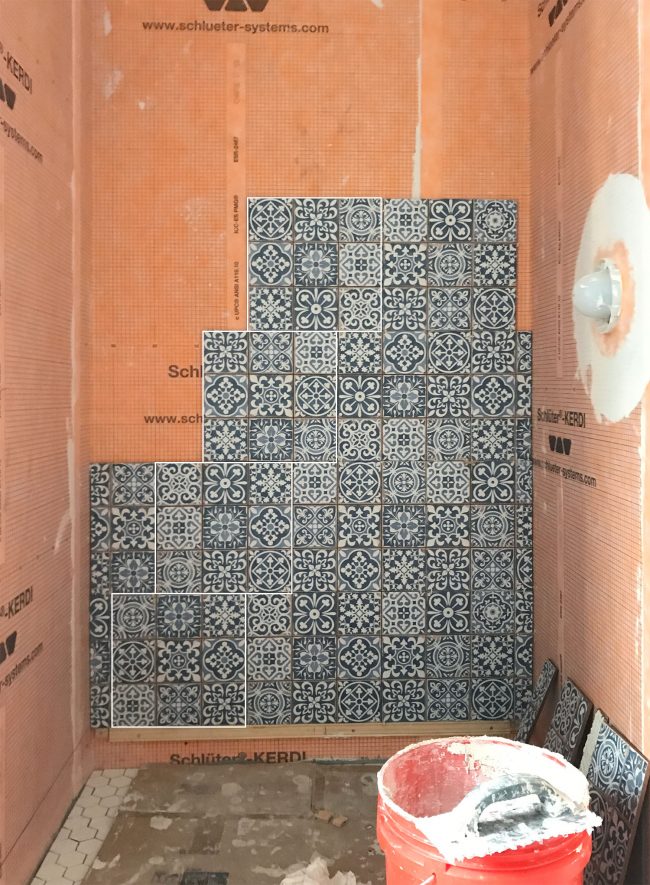 The other tip for laying these is to offset them as you build each row (I drew boxes around the big tiles in the shot above so you can see what we mean). We’ve seen some installs of this design where it’s reeeally obvious where the seams are between the big tiles because they aren’t spaced the same way that the 9 little tiles are within each tile. It kinda ruins the illusion, so offsetting them helped to make sure the spacing was correct all the way up. 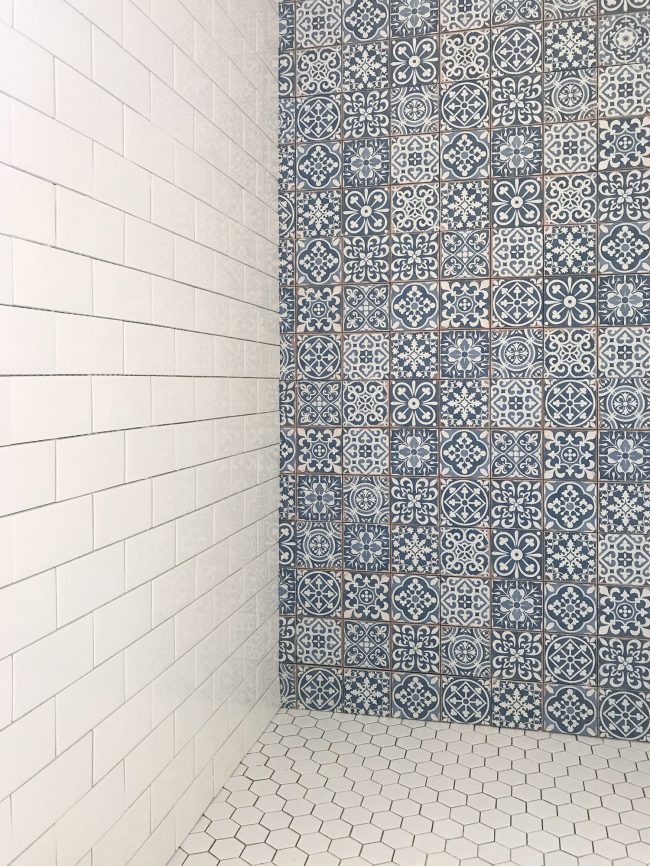 This shower is looking somewhat busy right now compared to the other two, which are simpler/safer tile choices, but once it’s all grouted we hope it’ll be great (fingers crossed). We’re using pretty low-contrast grout on every wall in here, so the dark lines you see now won’t be nearly as prominent once we’ve grouted. Grout color can majorly change how much you notice the shapes/lines of a tile (for example, this is white hex floor with dark grout versus one with light grout). So yeah, we think in the end this shower will be interesting and layered, hopefully without being too nuts in there. And if it sucks, we can just retile it. HAHAHAHAHAHA NEVER. 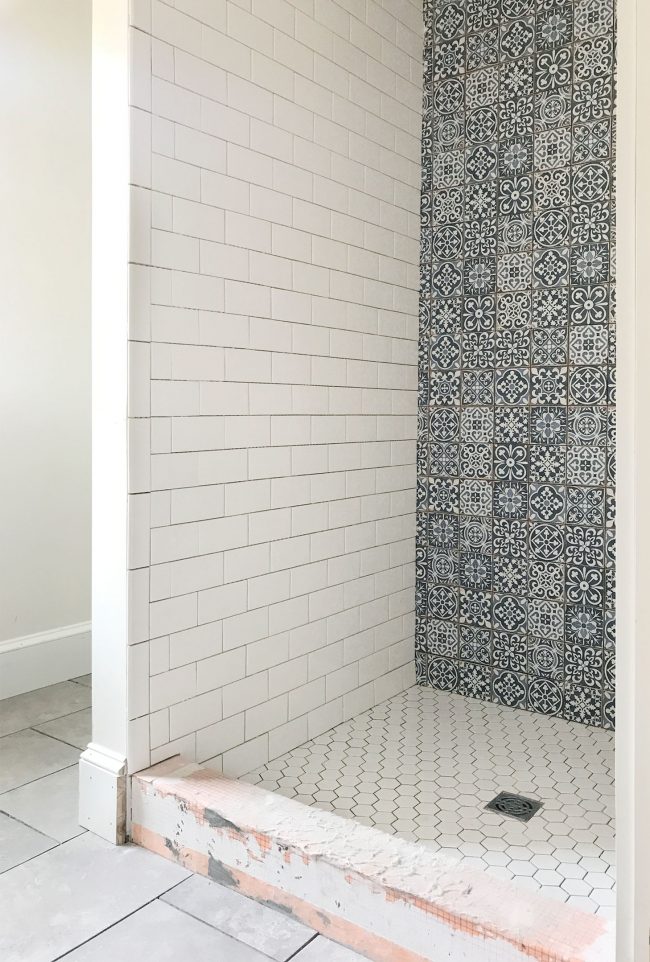 We’re not trying to kid ourselves into thinking that grouting will be quick or painless, but we are SO EXCITED to see the final result – even if it means multiple trips again to spread grout, remove haze, etc. SOMEDAY WE WILL BE DONE TILING AND YOU SHALL HEAR MY VICTORY CRY ACROSS THE LAND!

Also, the pocket doors in the back bedroom are up in all of their chippy and imperfectly beautiful glory. We got asked a few times why we hung the doors if we have to take them off and seal them or paint them (we’re leaving the chippy ones chippy, but have to remove any flaking paint and seal them for safety’s sake), and the answer is just that we wanted to complete the entire house’s trim, and trim can’t be hung around doors until the doors are set and hung. So it’s much easier to pop the doors off after they’re hung (you just remove two pins and off they come) than to hold up the whole trim process, which holds up the trim caulking and painting process, which holds up the floor refinishing process, etc. 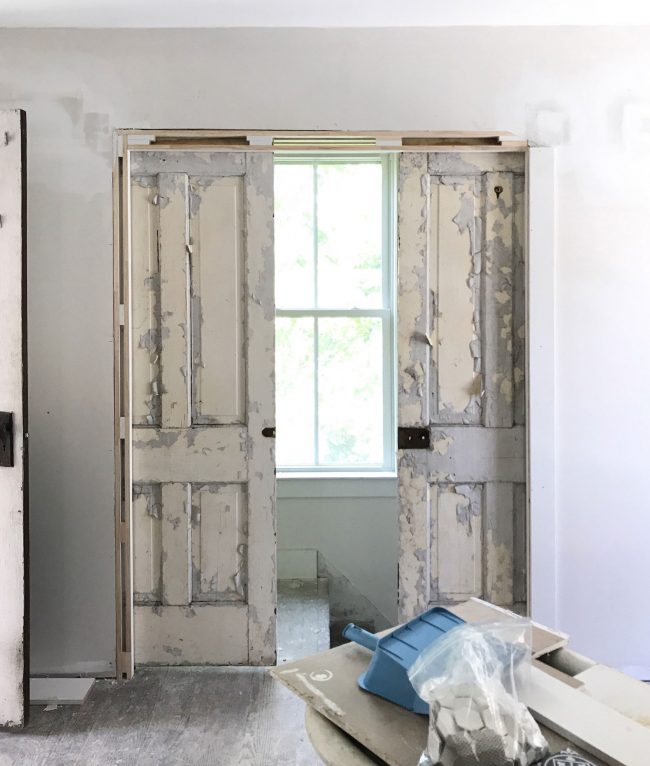 And as you saw in the video – tile wasn’t the only progress we made last week: more trim went up, the A/C is actually all installed and done (but I explain why it can’t be turned on yet – d’oh!) and for anyone who actually comes here for the lovely sight that is water flowing out of a hose bib, that’s covered in the video too. You’re welcome.

Psst- if you want to catch up on all of the other beach house updates we’ve shared, here ya go:

#61: How To Conquer Paper Clutter (Once And For All!)
#62: What The New Owners Changed In Our Old Houses