We’re nothing if not house optimists, so even as our our beach house comes apart (literally, we have mold and termite damage and bad wiring and no HVAC and a failing foundation and pretty much all of the other not-ideal things that necessitate carefully rebuilding a lot of it) we’ve learned that sometimes you just gotta focus on the fun exciting home-reno aspects to make it through the highly unglamorous and grimace-inducing ones. We’ll update you on our rebuilding progress soon (it’s pretty slow-going), but today we’re swinging open our brains and sharing the much-more-fun-to-think-about beach house style ideas that are bouncing around in there. Because even if there seem to be a million steps between now and the whole decorating thing, it’s totally keeping our house-reno mojo up right now. So without further ado, welcome to my brain.

Before we dive into the pics, you may want to refresh yourself on our floorplan and preliminary renovation plans in this post. There’s a full house tour video there too, and we’ve included the floor plan below for quick reference. Note: Our only significant change since originally creating it is that we plan to move the downstairs bathroom door into the mudroom, rather than having access from the dining area. 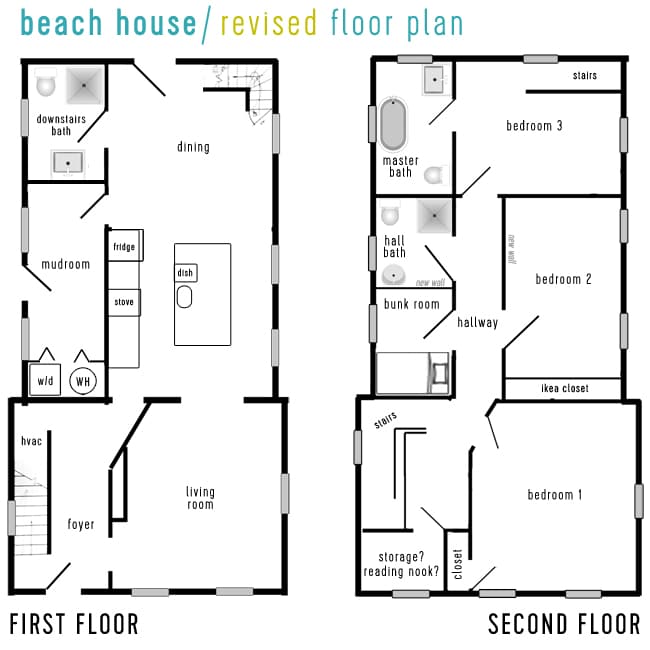 Our general inspiration for the inside can be summarized as: relaxed, uncomplicated, comfortable, and old-meets-new. We want to resist the urge to overfill or overdecorate the house, since it’s meant to feel easy and light (not meticulously organized or over-styled). Plus, it’s an old home, which is one of our favorite things about it – so we are embracing that full-on (keeping all the old doors and knobs and refinishing the old heart pine floors, and keeping our beloved curved wall and the original back staircase – we even uncovered an old brick chimney that we’re going to chip out and expose).

Of course we’ll be adding some updated touches factoring in guest comfort, mostly in the form of new things like fresh mattresses and bedding and curtains (as opposed to filling it with antiques until it feels like a set from a period film). And I realized after uploading all of these pics that they’re feeling very white. Which, don’t get me wrong, we’re definitely going for light and airy – but my guess is that we’ll end up making the space feel a bit more colorful than some of these inspiration images might suggest.

Let’s start with the bedrooms, since they pretty much epitomize our goal of relaxed and uncomplicated…

A bedroom – especially one meant for guests or renters – doesn’t need much in it, which is good because the bedrooms in this house aren’t huge. So our main goal is to create a bed that looks crazy comfortable and not too fussy. Maybe a simple nightstand, some fun artwork above it, and a cool light or two (maybe our $90 sconces in one of the rooms?). I love that these images all demonstrate that you can still make a simple, uncomplicated bedroom look welcoming and calming, as opposed to stark and bare.

In addition to the three main bedrooms, we’re carving out a bonus sleeping zone for kids. It’s going to be tight (pretty much wall to wall with a ladder or something in front) and we’ll probably go white with the beds to keep the small space feeling bigger (that wood one is an Ikea hack!) but we’re aiming for something a little less formal and tailored than that bottom right pic (how cool is that rope ladder though?!). Dibs on the top bunk!

We have a tub in our bathroom just like the one above  – JUST LIKE IT! Same claw feet and everything! Well, except ours is scratched and rusted and it isn’t painted that cool color on the outside. YET! But I smell potential. Can’t wait too get it reglazed. And back into the bathroom, since it’s currently in a bedroom because the bathroom was literally falling off the house (did I mention we have ALL the not-ideal things going on?). Quick, let’s look at more pretty things! We’d love to inject some natural tones and/or colorful accents via the vanities or floor tiles, and John especially loves the classic hex pattern in that bottom right pic, just maybe a medium gray instead of black so it’s not as dark.

The mudroom space will essentially be for corralling sandy beach stuff, while also giving access to the full bathroom downstairs (so people can shower straight from the beach) and toss sandy towels right into the washer and dryer, which will be housed within the mudroom. We’ll probably incorporate some closed storage for beach toys and towels, but otherwise some simple (and affordable!) shelves and hooks are probably more than enough, since this isn’t your everyday coat & backpack-filled mudroom.

Since the beach house will just need to have a few cooking and serving staples, we’re not going to fill it to the brim with gadgets and gizmos aplenty (shout out to Ariel). So we like the idea of some unfussy base cabinets, maybe some open shelves, and perhaps a little color on the lowers. We want to do it relatively affordably and we don’t mind if it feels a bit old or rustic (versus feeling top of the line or super sleek). We’re thinking butcher block counters – maybe on the island – plus a few other hits of wood, like stools. And a freestanding piece like the cabinet in the top left picture would be all that and a bag of chips. Can we bring that phrase back? Please?

“Dining room” is probably too formal of a term for what will likely end up as a casual eating area, so we love the vibe of these pictures above. I’m especially loving the black round pedestal table + bench seating + coppery chairs + peach pillows equation (seriously, it’s giving me all the warm fuzzies). We’re digging the coziness of the bottom picture too, with that natural table and the woven light above it. Although sheepskin covered chairs in a rental house is probably not the smartest choice…

My love for the old wood and chippy-painted doors in this house borders on unnatural. We have a veritable smorgasboard of original doors. A doorgasboard, if you will. So we’re planning to reuse all of them (even though our contractor has warned us three times about the challenges of making old, crooked doors function properly). Assuming we can get them all back to being functional (which we’ll do if it nearly kills us! I’m a dog with a bone!), we know they’ll give this old house character for days. Bring it on, doors. Let’s do this. After we deal with the mold and the termites.

The living room isn’t very large and we’ll have a cool but layout-challenging curved wall to contend with. We’re not picturing a lot of furniture in there – maybe a couch, chair, coffee table, and TV? – so we want them to be interesting, especially since it’s the first room you’ll see. We LOVE the clean lines of the wooden coffee table in the big pic (maybe we could build something like that?) and those blue ottomans got us thinking that a colorful sofa or chair could be a fun option too. Just gotta find something dark enough to wear well.

I know it may seem weird to make a separate category for bookcases, but as much as we’re trying to keep this house simple and uncluttered, we still want at least one or two book-filled spots that feel lived in and homey (a bookshelf packed with books, magazines, and games makes those rainy days spent cooped up at a beach house SO MUCH BETTER). So we’re including these to remind us of the range of bookcases we could potentially consider. We’re not sure if we’ll have enough books to emulate the top left pic, but maybe a more casual wood rack like the one under it (perhaps in the bunk room with some colorful kids books on it?).

The front/main stairs of the house will remain wood (although the risers and spindles of ours are white), so the large pic on the left is making me super excited for getting them back to their former glory. And we’re pretty excited to have a bonus back staircase (some folks have asked why we’re keeping that since the layout would be easier without it – and the short answer is that WE FREAKING LOVE IT and all of the original character it adds. Many of our neighbors told us theirs was already gone when they moved in and they were so sad to have lost it, so we’re downright giddy to get to keep ours!). It’s definitely in rougher shape than the front steps (the risers are also already painted white), so we’re thinking that might be a cool spot to inject some color. Maybe the whole shebang like the top right pic if we can’t salvage the worn wood treads? Or just by adding a hit of minty green to the already-painted risers inspired by that bottom photo?

Side note: I just learned baskets like the one on the floor in the top right pic are called Belly Baskets and I LOVE THIS ONE.

And so ends the in-my-dreams-the-beach-house-will-be-this-fabulous tour that’s going on in my head. I’m sure there will be a lot of twists and turns as we get closer to a finished house that we can actually paint and furnish and decorate, but it’s really fun to toss out all of our inspiration to see what sticks. One thing’s for sure: there will be built-ins! And blue-green! And old doors! And light walls! And peach pillows! And lots of wood! Viva la beach house! Ok, back to dealing with that highly unglamorous bathroom’s-falling-off-the-house sitch. Thanks for daydreaming with me.

#30: How Minimalism Almost Grinched Our Christmas
#31: We Picked A Beach House Color (In The Weirdest Way)