We’re back to share the “backstage” details of our recent photo shoot with the crew from BHG for Do It Yourself magazine and Kitchen + Bath Makeovers (with our newly transformed nursery and our recently renovated bathroom playing the stars of the show). Let’s just say it was a day full of prepping, propping, shooting, eating, secretly high fiving when no one was looking (ok, that was just me and John), and standing around staring as the masters worked their magic (again, that was just me and John).

And we had a lot to stare at. There were large panels of fabric to soften any outside light, big worth-more-than-our-house camera lenses, and computers hooked up to the camera so each picture could be analyzed and every detail could be tweaked to “get the shot.” It really reminded us of how much goes into those seemingly effortless photos of people’s homes that fill every shelter magazine on the shelves of Barnes & Noble. Below you’ll see the high-tech-camera-hooked-up-to-the-computer setup, along with our nursery chair full of baby toys and a shot list (which is a printed booklet from the magazine’s art director or editor which directs the photographer and stylist when it comes to which photos to snag for the story). 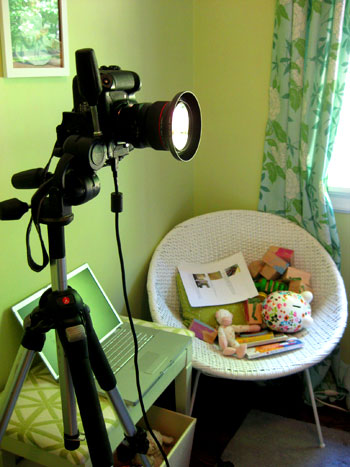 We’ve learned that as glamorous as at-home photo shoots sound, you really have to be completely ok with people rolling in and rearranging all of your stuff (sometimes moving it into a pile in your nursery chair for example) so they can reset the space and style it in a unique way to capture every angle that they need with ease. So our first behind the scenes tidbit would be that as flawless as each room looks in a glossy magazine, picture it with piles of props just out of frame, since it’s likely that there are tons of eyesores hiding just beyond the bounds of the shot – like thick extension cords for cameras and computers as well as stacks of unused decor items. The good thing is that everyone’s super respectful when it comes to putting things back and leaving the house exactly as it was when they arrived (if not a bit cleaner- bonus!).

Oh and amid the chaos we somehow managed to work in a quickie interview to sleuth out a few photo shoot tricks of the trade with both the stylist, Cat (who happens to be my best friend- we actually met in NYC and worked at Country Home magazine together back in the day) and Erik Johnson, the photographer (we worked with him a while back when he shot our house for a three part series for Do It Yourself which ran last year- you can check those out here, here, and here). So without further ado, a few glossy magazine secrets and tips, straight from the pros themselves… 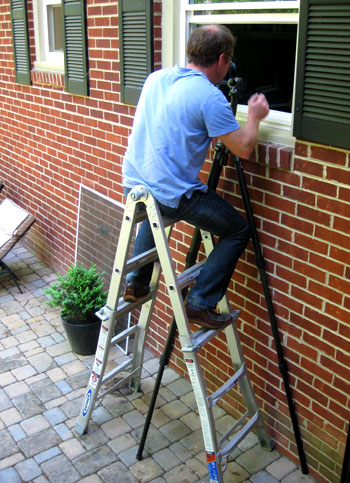 Of course these tips aren’t necessarily things that you’d try when shooting your own home for your blog or your personal photo album (some are a bit intense) but it’s definitely interesting to learn what it takes to get the shot for glossy national publications. And it’s not all glitz and glamour. In fact, Erik’s first tip is to check your pride at the door and do what it takes to get the shot. That might mean lying down on the floor or squishing yourself into a corner and holding your breath, just to get a photo from the right angle. Heck, in our nursery’s case it actually meant sitting on top of a ladder and shooting into the room from an exterior window (after removing the screen) – all in the name of getting the widest angle possible.

But that wasn’t the only exterior action that our house saw that fateful Friday. They also used a strip of fabric (referred to as a scrim) to diffuse the light coming into the window from outside so it was less harsh and a lot more ethereal. It might not look like much, but the difference in the photos was amazing. Oh the tricks of the trade… 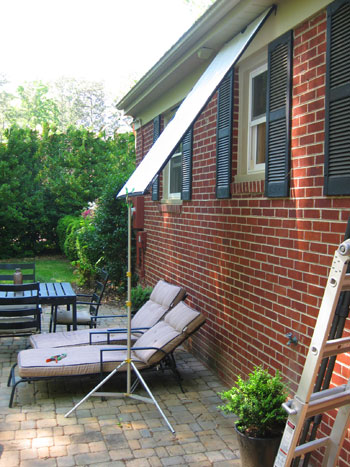 Erik’s second tip is to always use a tripod. It helps to keep things steady and adds to the crispness that you can capture. So that’s actually a pretty easy trick that anyone can implement (even without getting on a ladder outside or purchasing a huge fabric scrim for filtering light). And again you’ll see him doing what it takes to get the shot he needs (which happens to mean standing on one of our dining room chairs). Whatever works, right? It’s just funny to see this side of things because we’re sure when the shot he was actually taking runs in the magazine no one would ever guess that capturing that photo involved a man with a giant tripod standing on a chair. 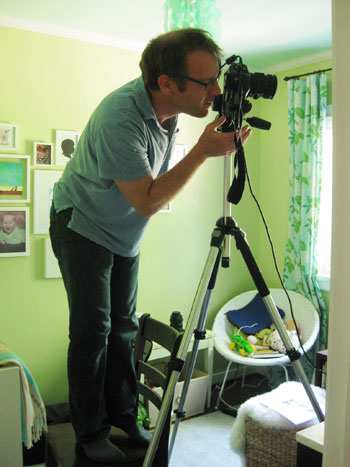 And just for fun, here’s an over the shoulder shot so you can see why he was up on a chair in the first place. Yup, he was just getting a boost to be closer to our hanging mobiles. We can’t wait to see how all of his photos turned out. But on to Erik’s next tip: after your camera is mounted to a tripod, experiment with angling the camera up, down, or to the side. People tend to only think about shooting straight on when their camera is on a tripod, but Erik was all about working those angles and swinging his camera 45 degrees up or 25 degrees down, just to get an interesting viewpoint and a less stagnant looking shot in the end. He suggests trying a few different angles since you never really know what will work best until you give a few of them a try. 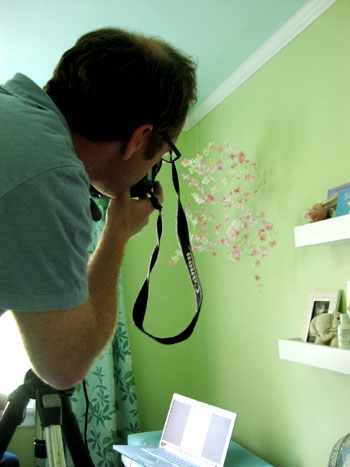 The last two photography tips actually come from Erik’s photo assistant, Abby Greenawalt. She was also a real pro when it came to making sure they got every shot they came for (and then some) and she was the one to toss out photo tip number four: natural light is best. Every single photo that they took of our home was taken without any of our interior lights on. Which was totally crazy for us since we’re used to turning on every single light that we can just to avoid our camera’s garish flash (which always blows out the foreground and makes the background fade into the shadows). But Abby pointed out that when you use a tripod, the camera is more steady and you can capture things more crisply and get lighter shots than you could if you tried to hold it still and shoot in such low light situations (which results in a blurry mess). Good point.

Abby’s last photo tip of the day was: less is more. She recommends resisting the urge to snap a million pictures of a space, and instead suggested taking one and uploading it on a computer (just like the pros) so you can study the composition and ensure that you like everything (from the way the curtains are hanging to the flowers you placed on that side table). It’s easy to see if something is out of wack when you’re looking at the large photo on the computer (as opposed to the tiny view finder on your camera). Then you can tweak things and take one “final shot” instead of having to sift through 500 pictures in search of the best version after an unbridled snap-fest.

Now we’ll share Cat’s five styling secrets. Here she is standing next to our bathroom door (yup, doors usually have to come off in order to get certain shots) showing off the robes that she painstakingly ironed… 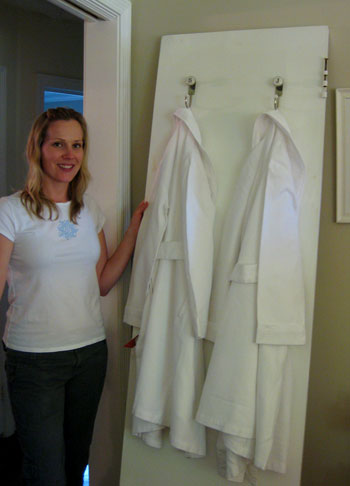 Which leads us to her first styling tip: be a perfectionist. In real life you’d probably never iron your robes, but that’s the job of a stylist. To make everything look flawless. She’s also been known to wipe down mirrors for that perfect shine, and remove screens from windows so they look crystal clear. So that’s another thing to remember when you look at a room in a magazine. Don’t beat yourself up too much if your windows “never look that clean” or your robes “aren’t nearly as luxurious.” Chances are they had a little help from a stylist and don’t really look like that on a daily basis. 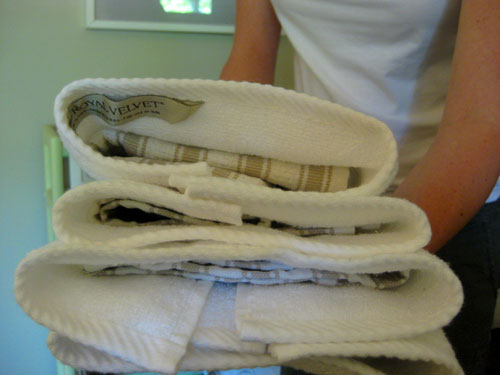 She also cheated things like ottomans and accents a bit to the left or right to create separation that works for the angle of the shot (but looks all wonky and crazy if you stared at it straight on). Because it doesn’t matter what the room really looks like- it matters what it looks like through the lens of the camera. Another way that she routinely cheats things is to pull everything that’s on an open shelf (like the ones in our bathroom closet) almost unnatrually forward so they catch the most light. Through the lens they look great, but in person you’d be tempted to push everything back a bit since it’s so close to the edge.

Cat’s other three styling tips are simple: repurpose items from other rooms (she raided our kitchen for a glass cup to use as a bud vase), accessorize in groups of three (this is a common decorating trick, three objects on a side table or mantel just look better than two or four) and just play around (there’s no right answer when it comes to styling, so having fun with texture and working with different combinations of objects until you land on something you love is par for the course).

So that’s what we learned from our whirlwind photo shoot with the kind folks from BHG. Oh and did we mention that they fed us like kings and queens? They even set out the spread they picked up at Whole Foods in a glossy-magazine-worthy way. Doesn’t it look delectable? Yup, we had a fantastic time with Erik, Abby and Cat. And they even left a few extra sandwiches behind for us. Can’t really ask for more than that. 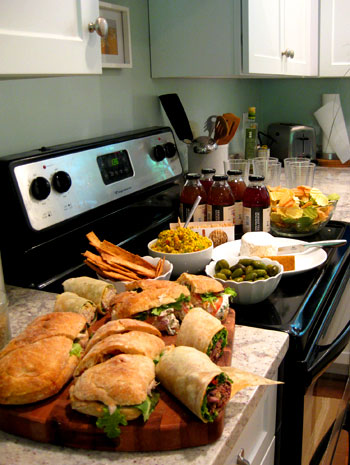 So we’re throwing out a big thank you to the whole crew and to Do It Yourself magazine and Kitchen + Bath Makeovers for setting up such a fun day for us (and for thinking that our house is photo shoot worthy- we’re honored). We hope you guys enjoyed our little behind the scenes details and we can’t wait to see how all those shots actually turn out. We’ll definitely keep you posted…

Psst- Wanna check out other behind the scenes photo shoot tales of yore? Here’s one from a while back with some of the same crew, another shoot for a totally different mag, and the backstage play by play from our fleeting appearance on HGTV’s Rate My Space.