That post title is my version of “Shake It Like A Polaroid Picture” and it is best when sung at the top of your lungs while peeling wallpaper. But we’ll get there in a minute.

Let’s talk about what we’d like to accomplish before this baby comes for a second. In our first house when we were preparing for Clara’s arrival, over those nine months we tackled a few rooms that were still on our redo list (mainly the full bathroom and the nursery) since so much of the house was already done (our kitchen reno was all finished, the hardwood floors had been redone, we had opened up some walls and closed off others, etc). This time around, there’s a baby on the way but this house is much less finished than our first one was, so our goals before baby are more about getting it to a nice blank slate than a fully finished after.

And in case you’re wondering, my mantra is: Go Prego, Go Prego, Go (a la the Three Ninja’s “Go Ninja, Go Ninja, Go”). Update: I have just been schooled by commenters who rightly recognized this song from Ninja Turtles 2 (the video editor just laid it over 3 Ninjas). My greatest ninja apologies for the mix up.

I chant it while I strip wallpaper and paint trim. It keeps me going. 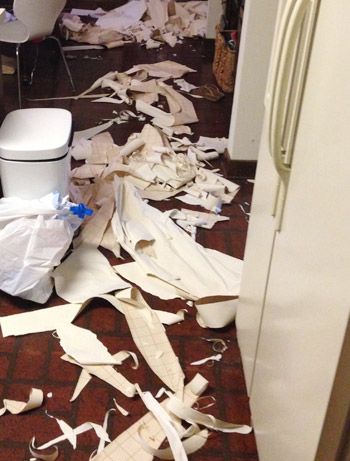 You see, I’m a mom on a mission. And that mission is to get rid of all of the old wallpaper, old carpeting, and blue trim before this baby comes. So that means chipping away at seven spaces over the next six months:

And we actually get to cross off that second bullet already, thanks to a few days of the serious wallpaper battle that I waged on the kitchen wallpaper. Ahh, look at that clean wallpaper-less wall, complete with a big ol’ intercom. Can I get a hootie hoo? 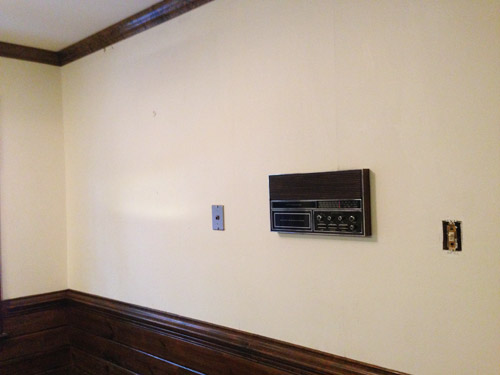 Every time I tackle wallpaper I try out a different method just to see what works better (I’m like Anderson Cooper with this hard-hitting investigative journalism) so you can read about how boiling water worked here, and how a steamer worked here (spoiler alert: so far the steamer is in the lead). And this time my method of choice was warm tap water and Dr Bronner’s soap. I hear that soap can help cut the glue from the wallpaper a bit more than plain water can. Some people swear by a Downy + water mixture, but since my tummy is so easily rebellious these days (morning sickness tends to go until about the half-way point of pregnancy for me) and my nose is turned up to “bloodhound mode”, I opted for a less fragrant soap that still cuts grease/tackiness : Dr. Bronner’s. 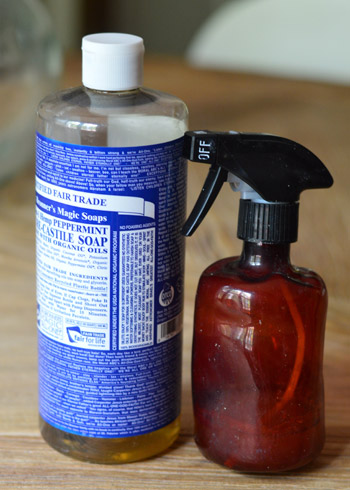 I just added about seven squirts of Dr Bronner’s to my wonky spray bottle (remember when I nearly melted it with boiling water here?) and filled the rest of the bottle with hot water from the tap (so it wasn’t boiling, but it wasn’t lukewarm either). Then I sprayed down this entire wall, let it soak in for about three minutes, and got to work peeling like a madwoman. 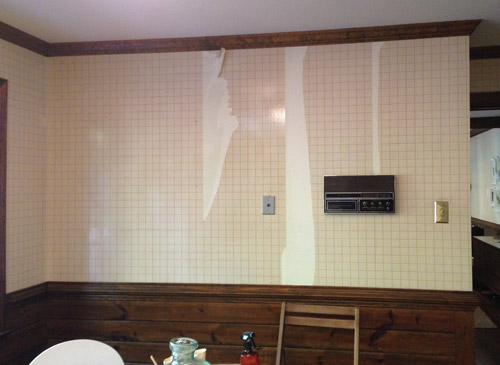 This is my third attempt at wallpaper removal and my third attempt without a scoring tool. Going into this I assumed I’d try one out one of these times, but thanks to many large sheets coming off like this, I’ve actually become afraid of a scoring tool since it seems like it could create a lot more work for me (peeling off ten million scored pieces instead of one big sheet). 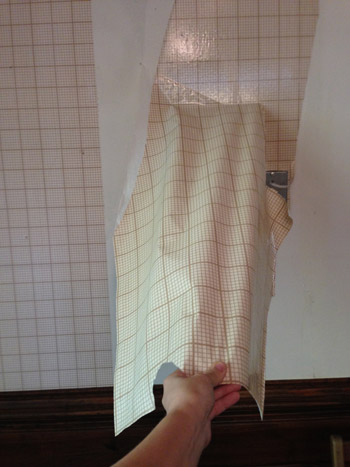 So the best removal methods certainly seem to depend on a multitude of factors (how stuck your wallpaper is, what glue was used, what prep work was done to the wall under it before it was papered, and how old it is, how many layers there are, etc). My recommendation would be to try peeling it without scoring first, and if it just won’t budge you can then move onto scoring things to get through the paper and loosen things up. I just think it’s a smart secondary step in case your wallpaper comes up in larger sheets like ours has so far (if it helps anyone, this wallpaper was all applied around 30 years ago to our knowledge, and we believe the walls were properly prepped beneath it with primer, which definitely helps with removal).

After doing that big wall next to the table, I just inched my way around the room, spraying, waiting three minutes for it to soak in, and peeling. 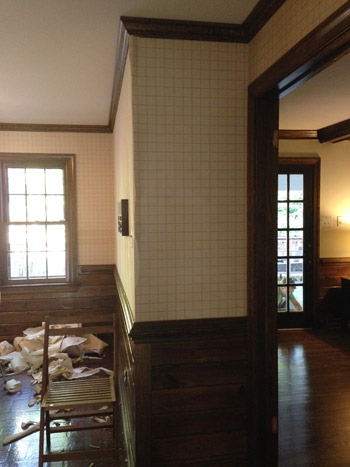 Once again, there were some nice big sections that came off… 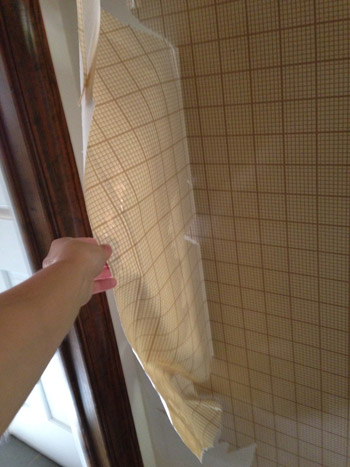 … but of course from these piles you can see that there were also smaller sections that took a little longer after the big chunks came down (I just resprayed those more stubborn areas and picked at them with my fingernail until they came off). I should also mention that I tried a spackle knife since I’ve heard those can be helpful but I found that it caused little dents in the wall so I quickly abandoned that. I’d rather take my time getting the paper off and have pristine walls in the end than ding them up getting the paper off faster (but then have to spend time spackling those spots to get things smooth again). 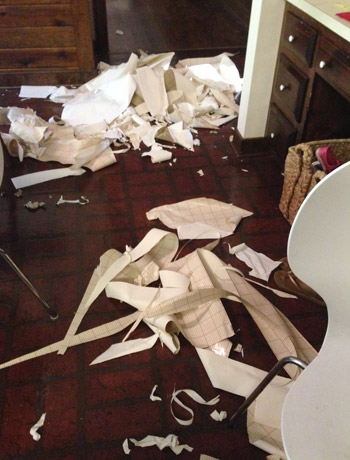 I ended up getting around to the other side of the kitchen (where the built-in desk is) about three hours into the removal process, which is when this momma needed a break. 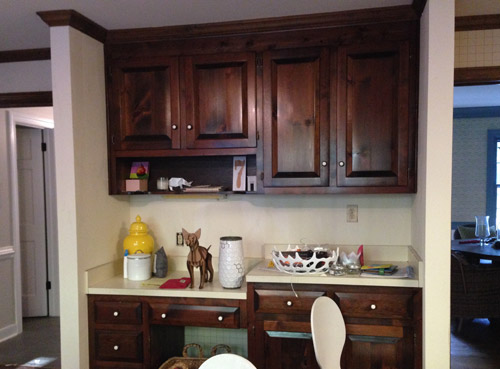 So I posted this Instagram picture of the mess I made, and curled up in the fetal position for a while. Wallpaper will do that to ya. 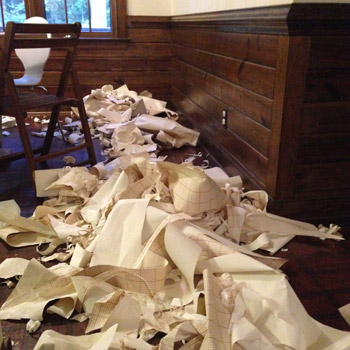 About four days later I had more prego gusto as I like to call it (every few days I get bursts of energy, and dang it if I don’t capitalize on them) so I ran into the kitchen with a battle cry of “Arrrggggghhh!” and got to spraying and peeling again. I had this side of the kitchen to do this time, which was easier in some aspects (the backsplash is a lot smaller of a space to peel, for example)… 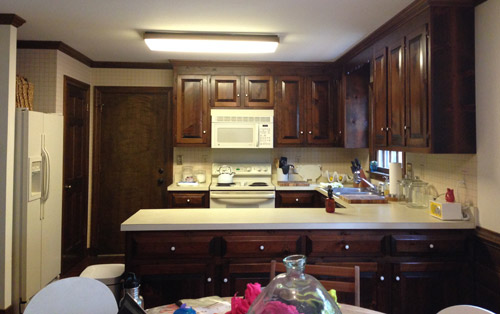 … but there seemed to be more glue going on, so it took a while longer to make my way around. 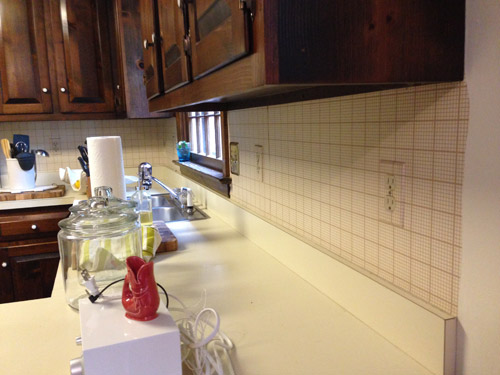 More glue in some areas meant that I was left with more of the paper backing on the walls in some areas, which looked a little bit like white tiger stripes wherever it stuck to the wall. 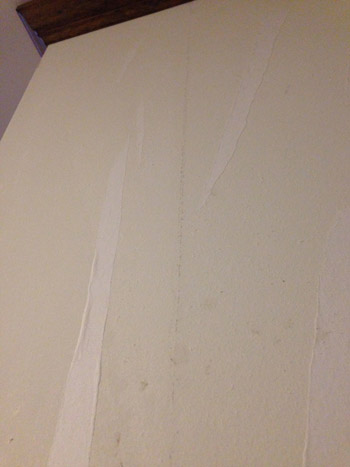 Here’s where I tried an entirely new method, that worked LIKE GANGBUSTERS. Guys, if you have that paper backing mocking you silently from your freshly peeled walls, here’s what to try. Fill a bowl with as-hot-as-you-can-get-it tap water and a few pumps of Dr Bronner’s soap (I’m sure other soaps could work, but I had luck with DBs). Then just dip a paper towel or a rag into it and dab that over the paper backing right on the wall. It saturates it a lot more than the spray bottle (without giving you hand cramps from squeeze-squeeze-squeezing) and… 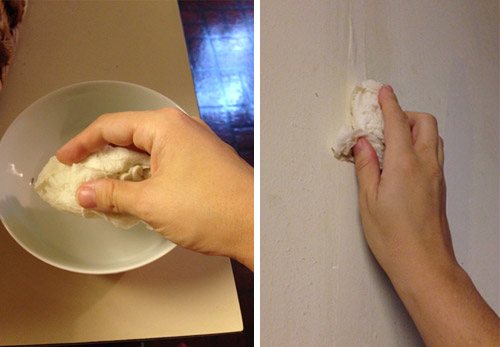 … even giant chunks of that stubborn backing should peel right off in one giant piece. At least that’s what worked this time. Look at me go. 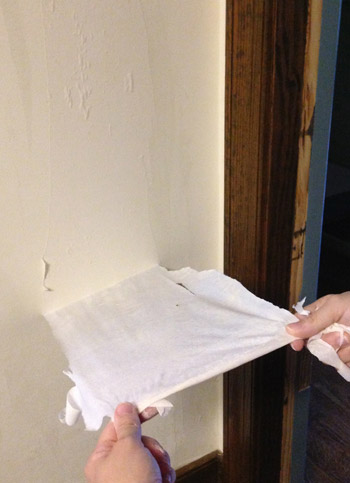 So in some parts of the room it felt like I was really peeling wallpaper twice (since it was a few hours of wallpaper removal followed by a few hours of backing removal) but when the dust cleared, we had a wallpaperless kitchen! Hurrah! 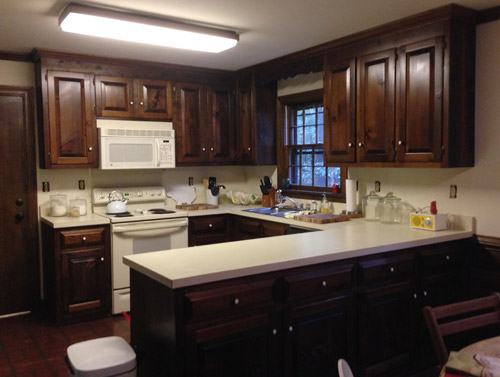 It’s still dark as heck with faux brick linoleum and a big ol’ garage-looking light on the ceiling, but it’s definitely a step in the right direction. As for how long the entire process took, I’d estimate that it was 8 hours of work when you add it all up. 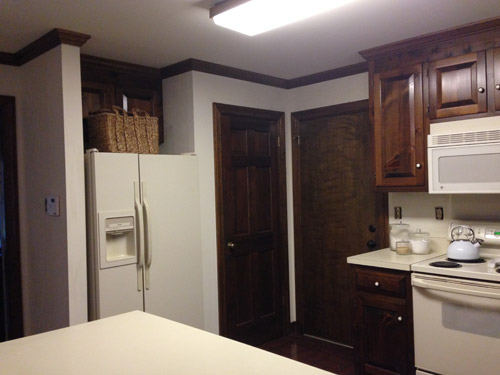 But those blank walls sure do feel good. Now all I need to do is wipe them down with a vinegar and water spray (that has worked to get rid of any lingering glue residue in the past for us) and we can paint our little hearts out.

Aaaand, just because I like to cross things off…

Oh and in case you’re wondering, the steamer still wins as the easiest/fastest method, but neither the boiling water or the hot tap water + soap approaches were that bad (and they’re 100% free) so they’re pretty decent back-up options – at least to try. Next up, I have my eye on the bathroom wallpaper (I think I need a smaller space to give my arms a break) and the carpet runner on the stairs’ days are numbered too. Be afraid, be very afraid (if you’re our carpet runner or bathroom wallpaper – if not, no need to be afraid). Is there anyone else out there with a deadline and a list of non-negotiable house stuff they’d like to accomplish? Honestly I’m so excited about the nursery that I’m hoping to rush through all of those other bullets so we can get to the fun stuff.

Psst- Clara’s having conversations again. And as usual, she’s cracking us up.