It seems like every room in our house undergoes a gradual (and often never-ending) evolution, but our bedrooms seem especially prone to this slow-burn decorating process. Exhibit A: this old “Evolution Of A Bedroom” post that chronicled the meandering path of our bedroom in our last house. Exhibit B: this more recent one about the winding evolution of our daughter’s current bedroom.

Well, if it pleases the court, I’d like to submit yet another bedroom into evidence: our current bedroom. (I don’t know why I doubled-down on the legal metaphor guys. Consider your objection sustained). 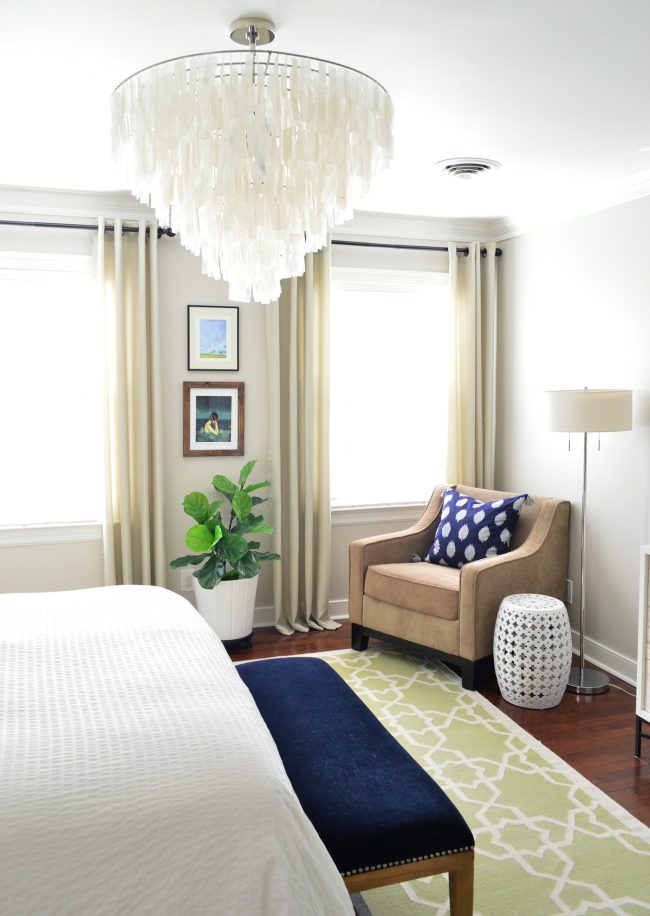 When we bought the house, the room looked like this. The walls, ceiling, trim, and even the carpet were basically the same off-white color. 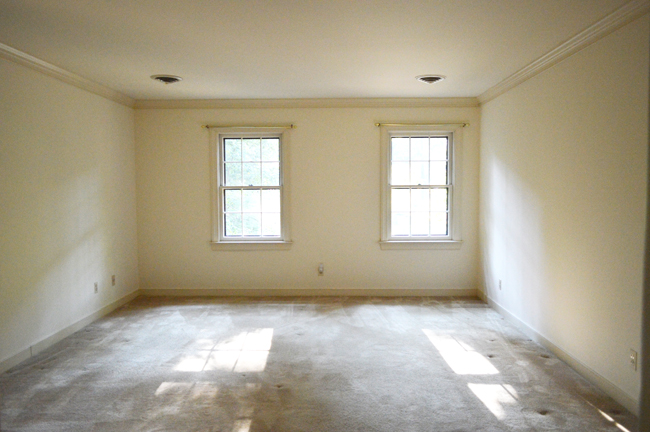 But rather than drag you back through all of the tweaks that we’ve made in this room over the last 3.5 years (yes, it has been that long!), let’s just pick up where we left off. As in, after we laid hardwood floors, painted it dark blue, added a frame gallery, and repainted it greige. 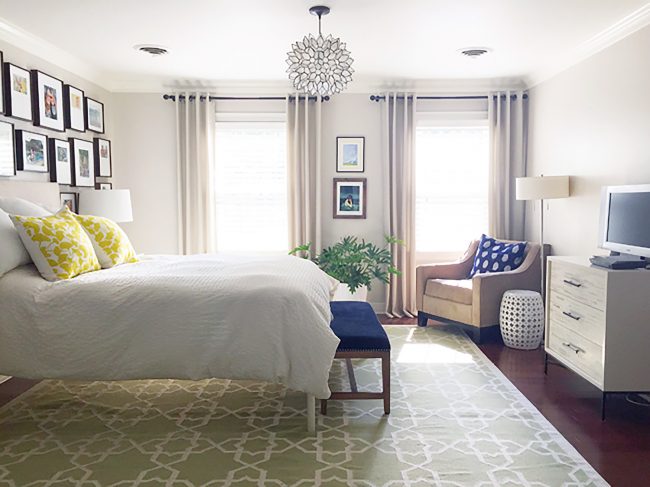 Change #1 is the light fixture. As much as we were charmed by the brass & glass fixture that we added a couple of years ago, we knew pretty quickly that it was a little undersized for such a large room. But rather than race to replace it with something bigger (and hang the old one in our closet or bathroom where it’ll be better suited) we decided to just enjoy it for what it was until we found something that we were sure was IT. Because there’s nothing like rushing out to correct “the wrong thing” only to realize a few months later that your updated choice is also “the wrong thing.”

So we waited. And waited. And last December, not only did a certain capiz chandelier catch our eye, its holiday sale price ($250 marked down from $479) made all the right synapses fire in our brains, flooding our bodies with serotonin, and sending spasms directly to our online shopping fingers. In short, purchase made. (This particular fixture seems to go in and out of stock, but right now it’s in stock and $100 off!) 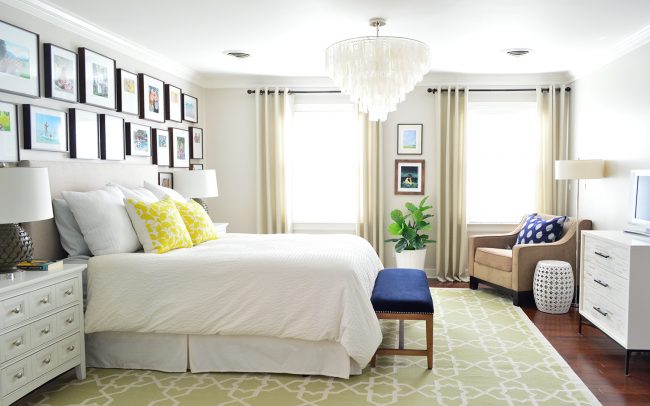 We knew the size would be better suited for the room, and the shiny chrome finish would work well with similar finishes already in the room (the floor lamp, the night stand hardware, etc). We’re all about mixing metals in a room as long as each finish appears a few times so nothing looks like an accident – like how the dark curtain rods mimic the dark frames, our inlay dresser’s hardware, and the feet of chair.

Plus, you know we’re already documented presidents of The Capiz Fan Club (Exhibit D: our anniversary frame tradition, and Exhibit E: our dining room’s chandelier, below). 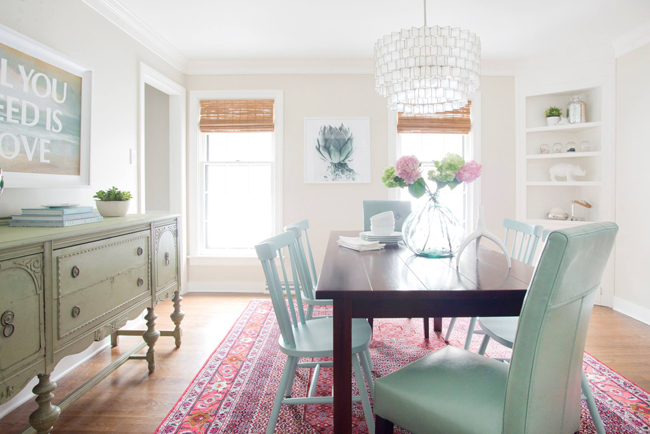 The box arrived shortly before Christmas and it was kind of like unwrapping a present early. Especially the unwrapping part… 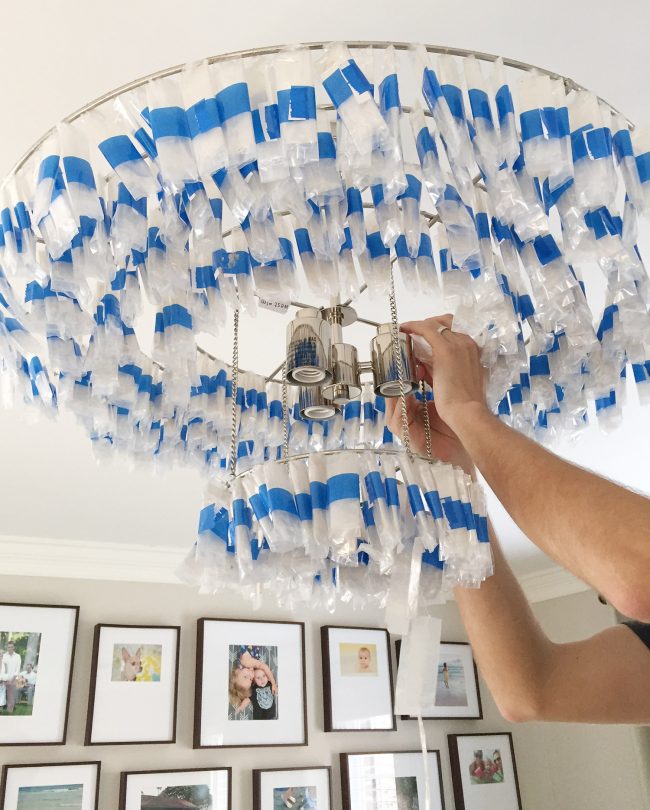 Yep, that’s EVERY strand of capiz carefully wrapped and taped in plastic to prevent breakage during shipping. Obviously, I can appreciate the careful packaging, but it was quite the task to untape and unfurl them one by one. I tried to count how many strands there were, but I lost track after the bottom two tiers. 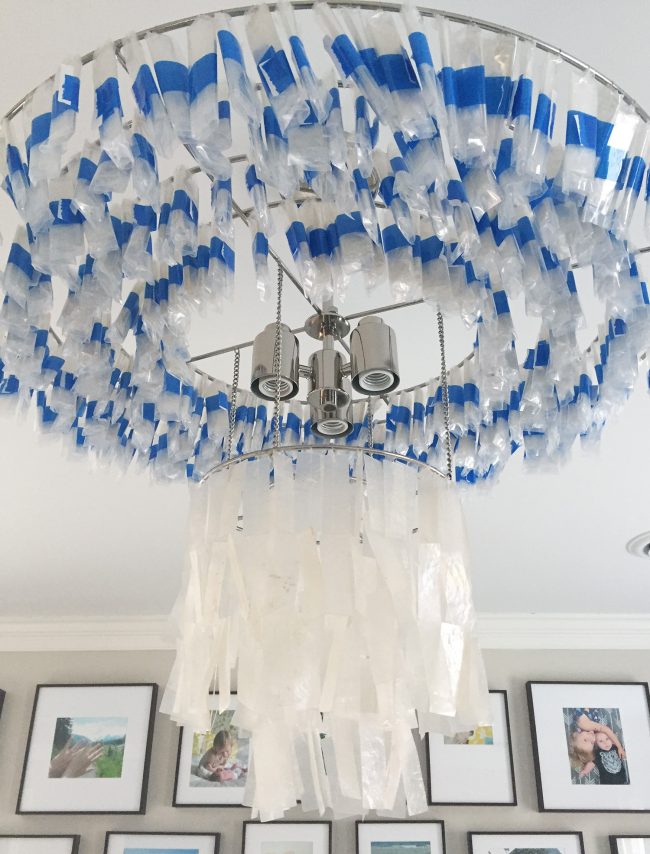 I also lost track because I eventually tapped Sherry and said “you’re it” because my arms were getting numb. My feelings for this light fixture are summed up by a thought I’ve had about my children on particularly trying days: “It’s a good thing I love you, because sometimes you’re a lot of work.” 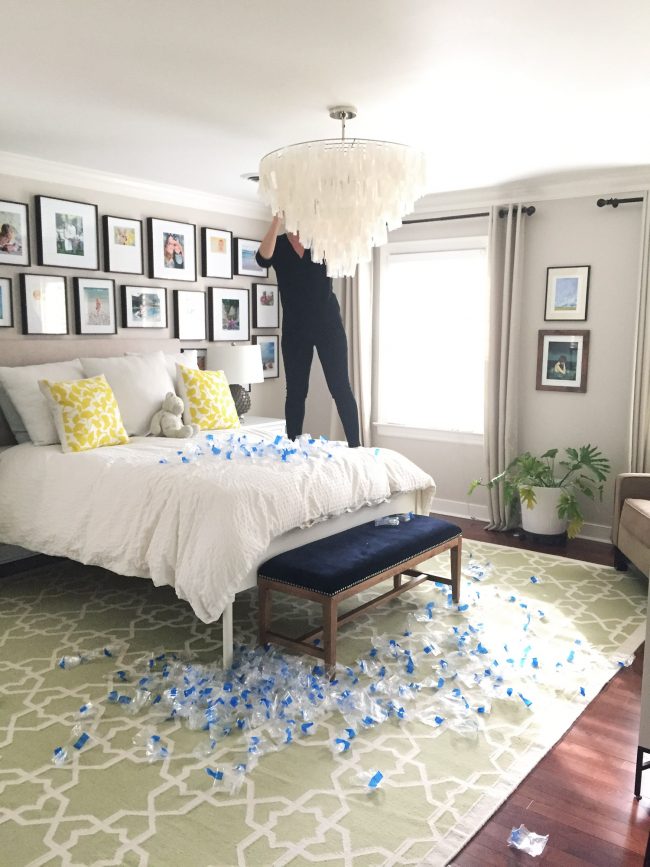 But all griping aside, she is a beaut. And there are three bulbs hidden in there (unlike the single bulb we had before) so it has also improved the functional lighting situation in our bedroom as well. 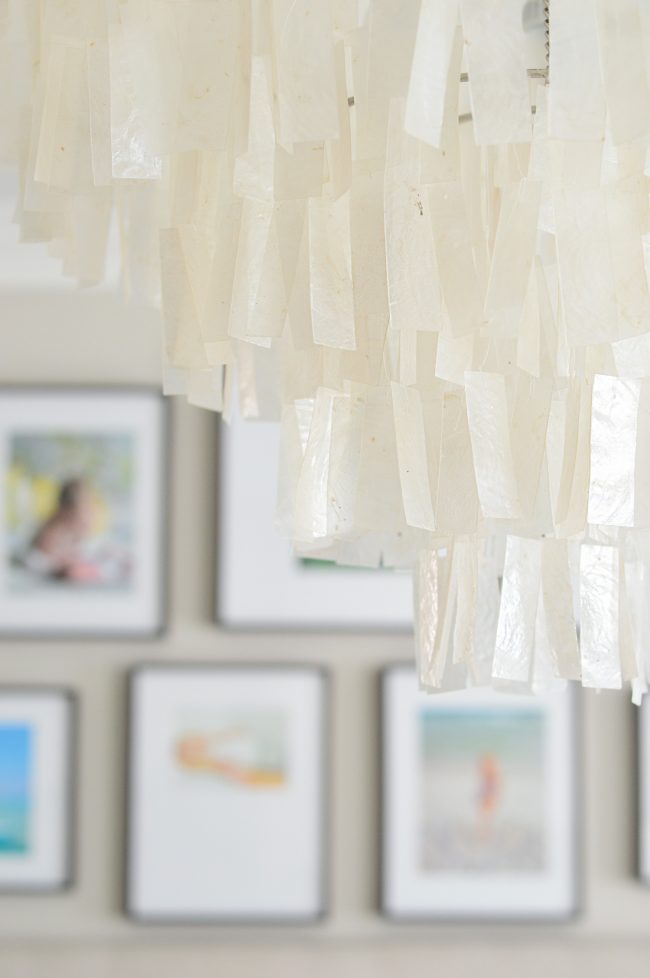 I’m sure you’ve noticed another change in these pictures (besides the plant swap – that philodendron is now living it up in our office downstairs because it didn’t seem to like being blasted by our heat vents up there once winter hit). Change #2 is the bed itself. 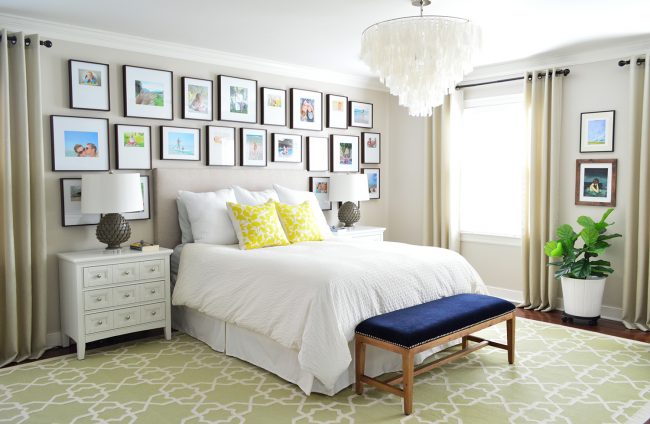 Our old Ikea bed was a platform bed, so our mattress rested on slats – which we heard wasn’t as ideal as it resting on a boxspring when we shared this big ol’ mattress diatribe. So in the hopes of maximizing our sleep even more, we thought we’d try swapping beds with the guest room, which already had the usual boxspring-and-frame situation going on.

We liked the look right away. The skirt felt sort of substantial and grounded in a way that the more leggy Ikea bed never did (although Sherry has been keeping an eye out for a light tan linen skirt to match the homemade headboard, so it looks even more like “a real gown up bed”). Once our free bed swap was complete, we just had to rehang the fabric headboard that we made a while ago, which had been attached to the bed frame itself. I used a really simple homemade cleat system to hang it directly onto the wall. 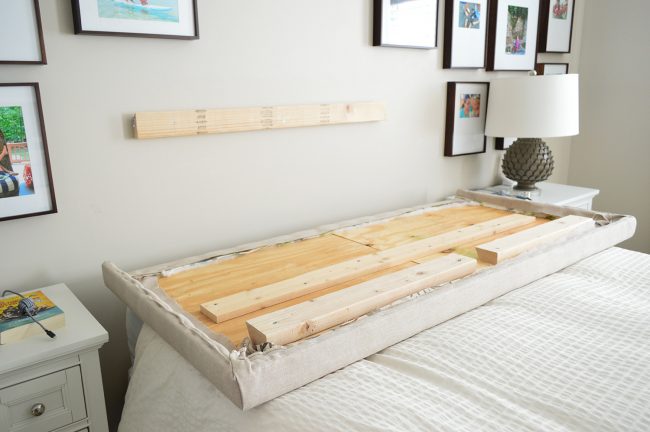 Basically I took two scrap 2 x 4″ boards and ran them through my table saw with the blade set on a slight angle. I hung one on the wall by screwing it into the studs, making sure the angle sloped towards the wall and that the whole board was level… 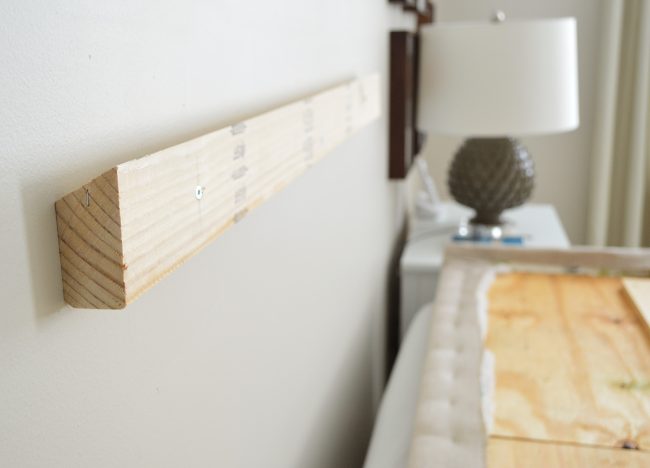 Next I attached the other board to the back of my headboard, making sure the angle of the cut faced down so it would slip right into the one on the wall. This is my favorite way to get a really secure hold on a big heavy object like a headboard. Note: I intentionally used something as thick as a 2 x 4″ board because our headboard has some depth to it, but if you’re hanging something thinner, they also sell metal cleats that would save you the trouble of cutting your own boards. 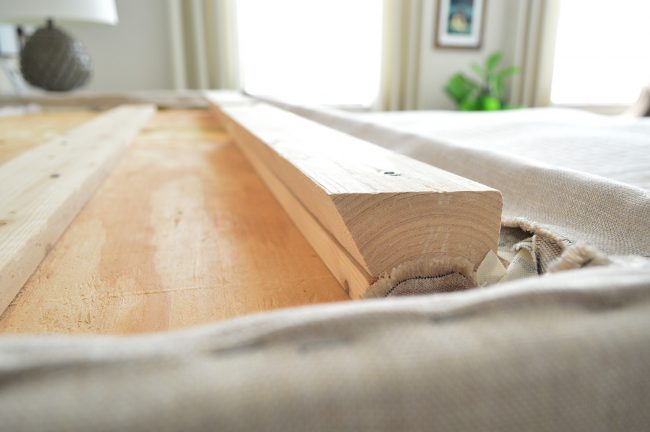 So with those two minor “evolutions” of our current bedroom, we’re loving the space even more. Although looking at this photo below, I’m realizing we’re overdue for some updated pictures in our gallery wall. We printed some new snapshots around this time last year, so it hasn’t been totally stuck in time, but the kids seem to keep growing on us. 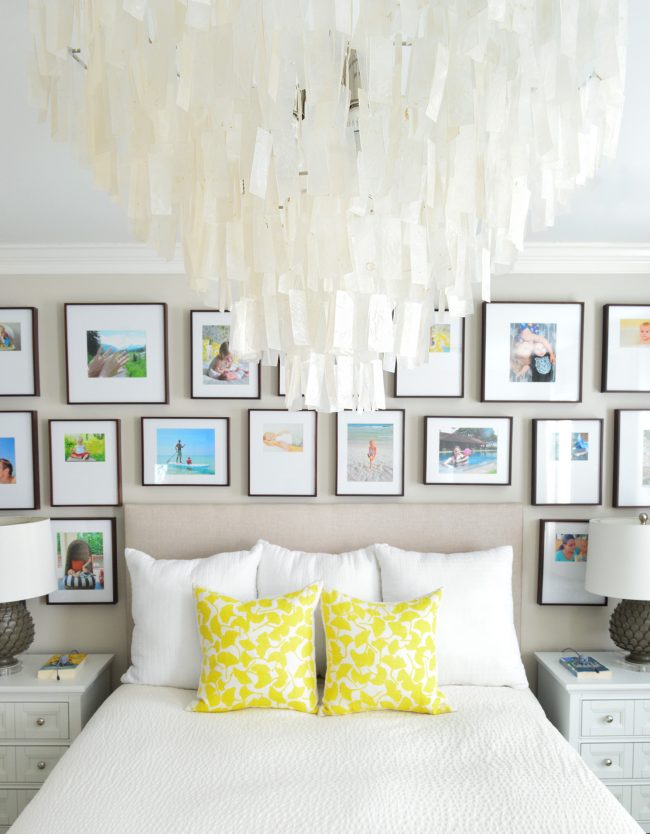 Burger of course wasted no time giving the room his official pillow-sit-of-approval. Because apparently we live in a world where we can’t even make it to the end of photographing our bedroom without a chihuahua coming along and squishing down one of the pillows. #whoruntheworld #dogs 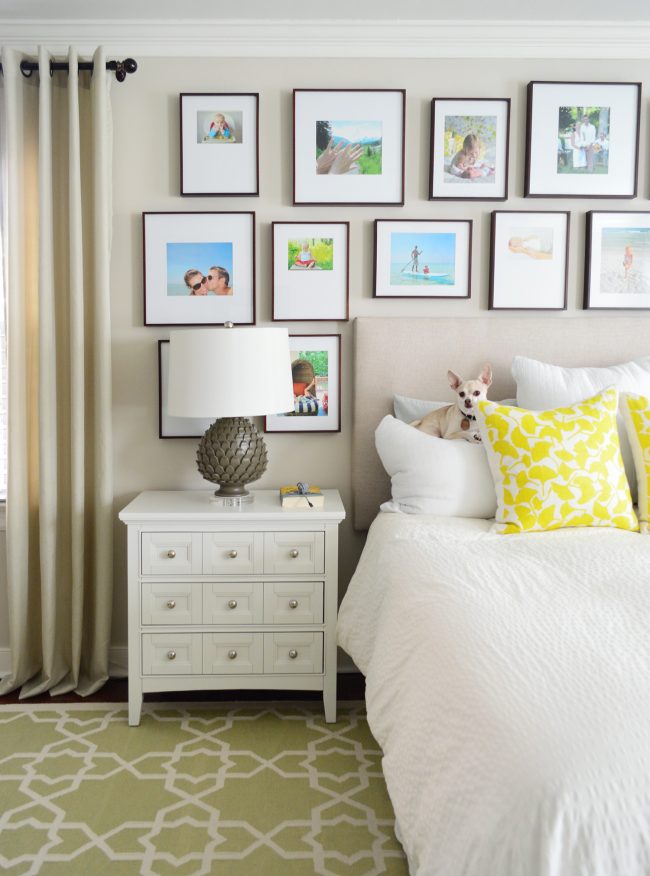 And lest you think this evolution is 100% complete (because when does that ever happen?!) we’re probably going to ditch the TV in here soon. We haven’t turned that thing on in almost three years since our son was born… which sorta throws that whole wall further into design purgatory. I’m thinking rock climbing wall, but something tells me Sherry’s gonna fight me on that one.

P.S. Tried to source a bunch of stuff in this post, but if you have any additional questions about what’s in our house (or our paint colors) this page has those details. And if you want to see more before & afters of our home, you can always catch them on our House Tour page.

#39 Transcript: How to Make House Cleaning Suck A Little Less
#40: Going On Vacation For “Research”