Our master bedroom has moved leaps and bounds over the last few days in terms of not looking like a big empty room with a bed in it. And by leaps and bounds, I mean frames and curtains. And more frames. Plus a few more frames after that. 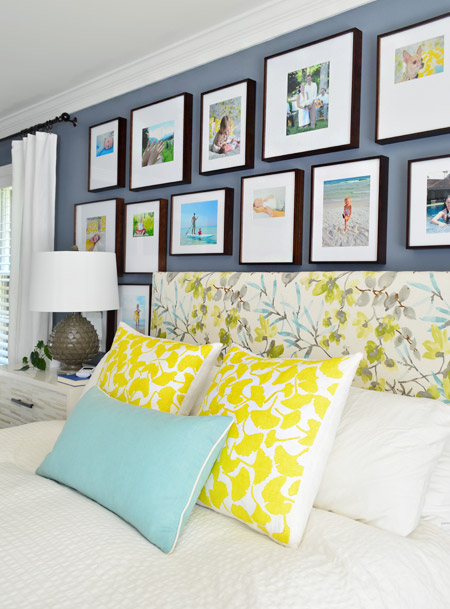 Before we started putting a bunch of holes in our walls, this is what the room looked like (and what it has pretty much looked like since we painted it nine months ago). It was in desperate need of curtains at the very least, but we’re not done with those yet, so just ignore those and let’s talk about the frames. 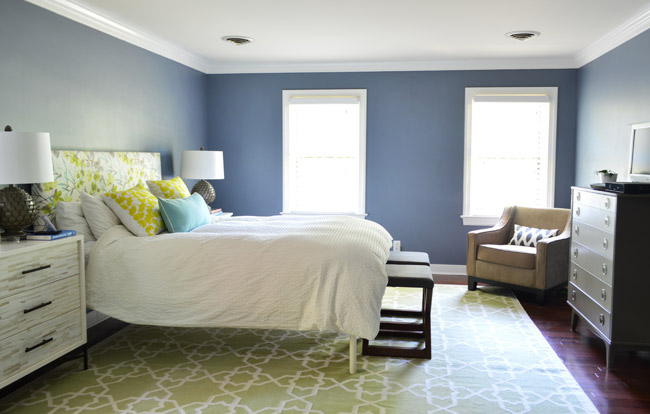 We had long talked about doing a gallery wall over our bed, and after stewing on it for a few months we decided we wanted to go with big dark frames (gasp! not white ones?!?) with nice mats. We have a gradual goal of amassing nicer frames in the house as we go (some real wood ones with nice big mats with glass and not plexi) so after shopping around at a few frame places, these large wood ones from Michaels fit the bill best. At $39 each for the biggest ones and $29 for the slightly smaller size, they weren’t cheap – but thanks to a two-for-one sale, it took the average down to $15 to $20 each, which is closer to what we spend for cheaper frames of that size. 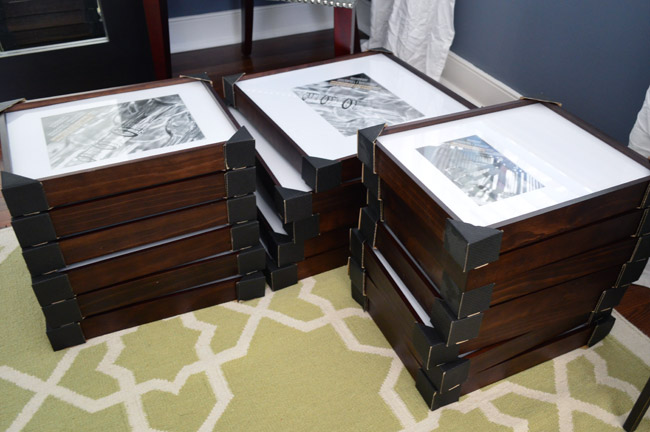 Once home with our original frame haul, Sherry cut a bunch of templates out of leftover rosin paper that we had from projects like this and this, and we taped up a rough, mostly-symmetrical arrangement. 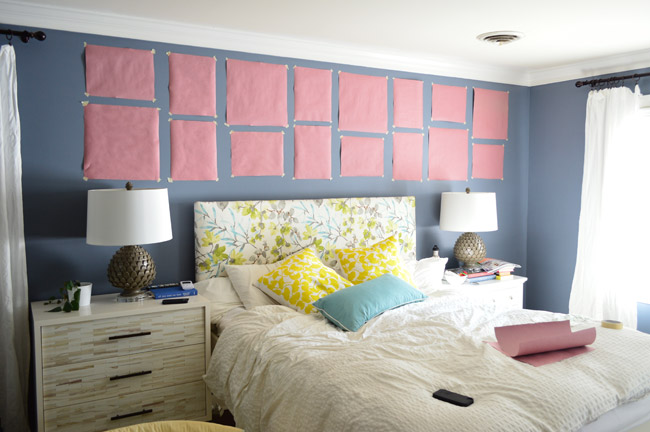 Neither of us was totally sold on it. It just felt a little too perfectly lined up. So Sherry took a stab at loosening up the rows and columns a bit. Kinda the gallery wall equivalent of unbuttoning the top button of your dress shirt. It instantly looked more relaxed and casual than the more formal/balanced arrangement that we had tried first. 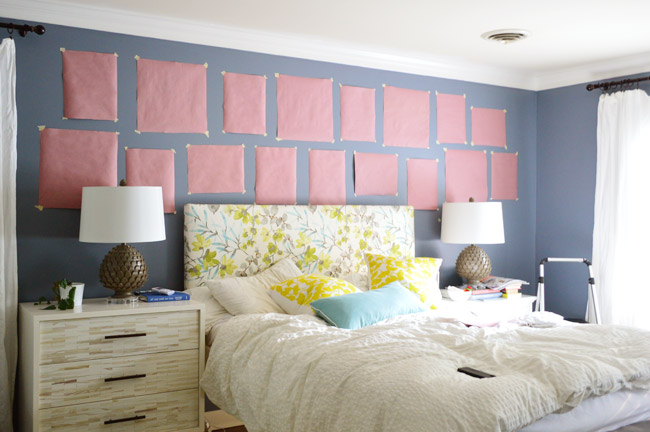 Next it was frame-hanging time. Considering the number of them (at this point we had 17), it wasn’t too bad. These frames hang nicely on one or two nails each (there’s a groove on the back lip of the wood frame) and since we had worked out their placement with paper templates it was pretty simple. Since the arrangement is somewhat mirrored from one side of the bed to the other, we used a laser level to make sure the frame on the left side was at the same height of its sister on the right (and we used a yardstick to make sure our side-to-side gaps between frames were about the same). 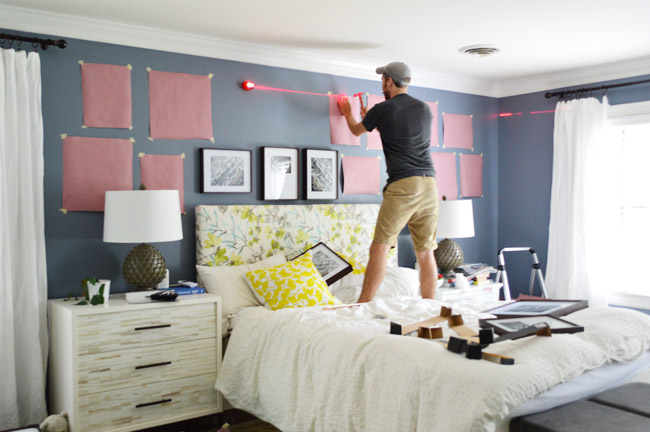 After we got the initial set of frames hung, we liked where it was going… but the whole thing was feeling a little too much like a stripe across the top of the bed, so we picked up five more frames to fill the space above each night stand for more of a full-wall-of-frames look. So when it was all said and done, we purchased five of the larger frames (they’re 11.5 x 14.5″ with an 8 x 10″ opening in the mat) and seventeen of the slightly smaller 16.5 x 16.5″ size (some of which had 8 x 10″ openings and some that had 5 x 7″ openings). Note: We later realized that the bare spot on the top left (by the curtain) felt off to us, so we inched a few frames around to make it more balanced looking (you’ll see that tweak three photos below this one). 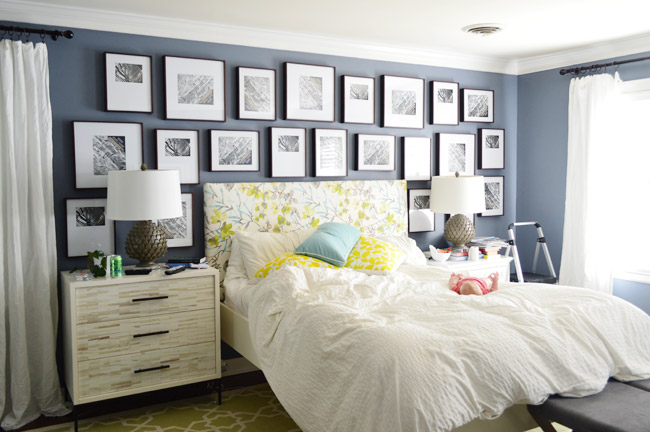 Although we’re big fans of putting just about anything in a frame, we had been looking at our family photos and realized that we had a lot of special-to-us photos that we wanted to properly frame, so a wall of family photos was the goal here. It felt especially right for a more personal space like a bedroom, and we had never seen many of these photos printed out in a nice large size like 8 x 10. So we picked a bunch and placed an in-store pickup order on Target’s website (which we discovered was cheaper for 8 x 10s than our usual go-to, Shutterfly). 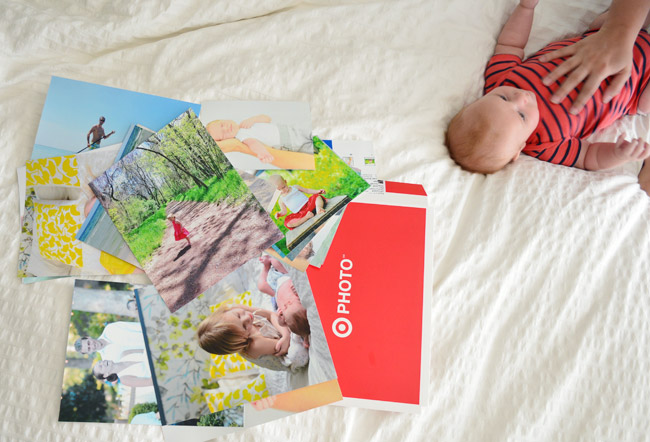 Here’s everything all framed up. We really liked going with colorful prints instead of black and white ones, especially on such a dark wall. They’re a nice balance of classic/handsome (wood frames & crisp white mats) + cheer (colorful family photos). And we like how the bolder prints tie into the colorful pillows and our headboard. 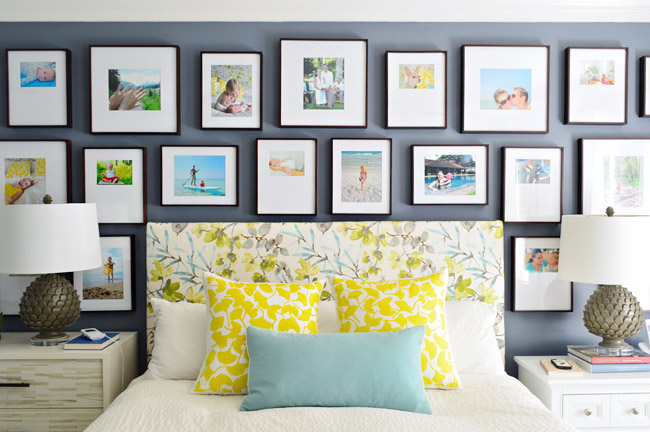 The process for picking photos was pretty straightforward: we scrolled through our family photo folders in iPhoto (we have one for each year, ordered chronologically) and flagged our favorites. That produced WAAAY too many options, so we whittled it down to the 22 we needed by choosing favorites from the favorites (for some reason it’s easier for us to pick top choices from the group than decide which ones to nix).

We didn’t keep any sort of color scheme in mind (there’s every color in the rainbow going on) but we did seem to subconsciously choose photos that looked more like a moment in time than a posed everyone-stare-at-the-camera shot. I think maybe we knew that a whole lot of eyeballs staring out at us might feel strange. So most of them feature people looking down, at each other, off to the side, etc. There are only a few with eyes that actually looked at the lens, like the Teddy beach shot in the top left corner. 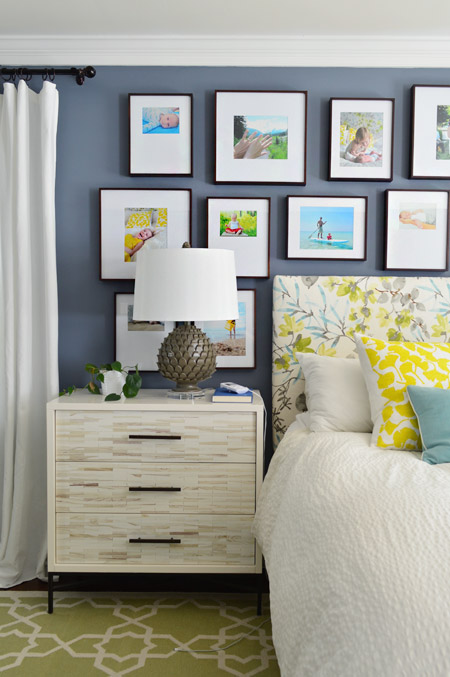 It wasn’t until we had everything hung that we realized a few other commonalities emerged. We stepped back and laughed about “all that water.” Turns out around a third of them feature us on the beach or in some other form of water (the lake, a pool, etc). It’s probably because a lot of our favorite photos were from trips we took. We actually counted six different states being represented in our photos (from Alaska and Hawaii to Florida and Delaware). Another funny realization was that three of the photos in our gallery were taken on the very bed that they now sit above. So we’re apparently a family who likes to travel… or stay in bed. 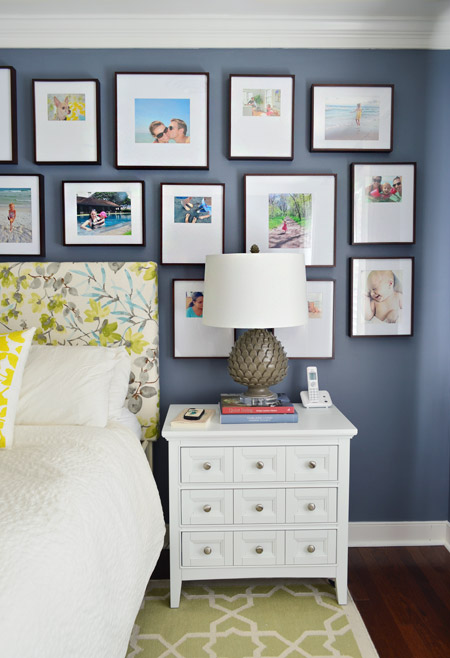 After we were all done hanging and framing everything, our formerly nondescript bedroom wall had sort of morphed into a photographic celebration of our family, which has been pretty awesome as the first and last thing we look at every day. In fact, as much as we loved the frame hallway in our last house (we didn’t think we’d ever love a frame arrangement more), our new family-gallery is right up there with it.

Oh, and even though it looks like those pictures behind the lamp are impossible to see, they’re actually some of the ones we see the most from bed and/or when we walk into the room. It’s all about the angle y’all. 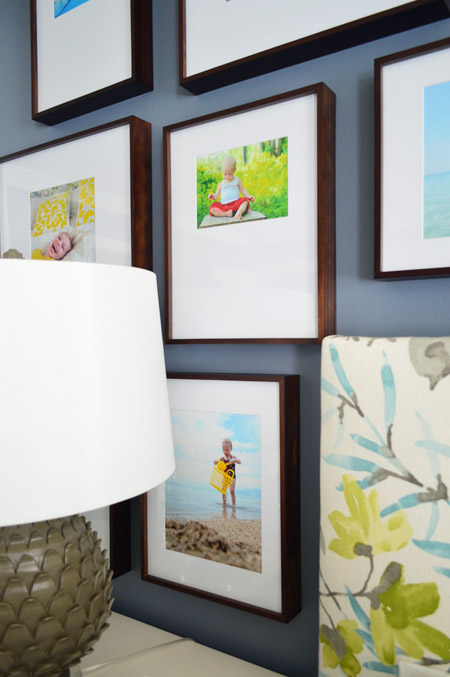 We hope our new family wall will encourage us to keep breaking out the camera and documenting family moments. Heck, it doesn’t even have to be the nice camera. We realized almost half of the pictures up here were from our iPhones or our old point-and-shoot. 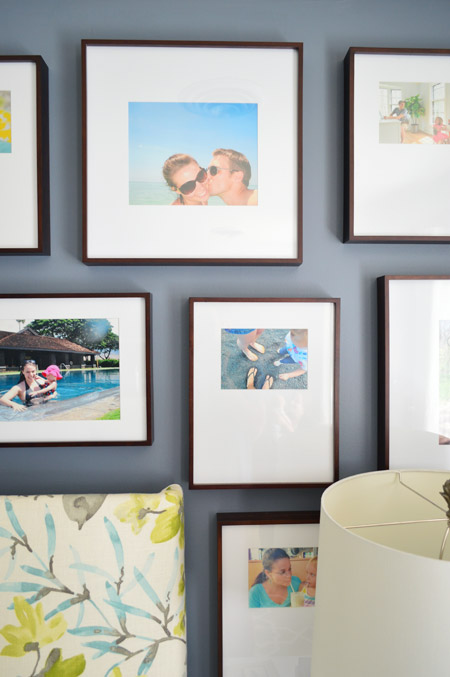 Clara was napping when we finished hanging everything, so we stole the opportunity to give Teddy and Burger some brother time in front of the camera. And knowing our penchant for framing the photos taken on this bed, there’s a chance this shot could end up on the wall at some point. So meta, I know. 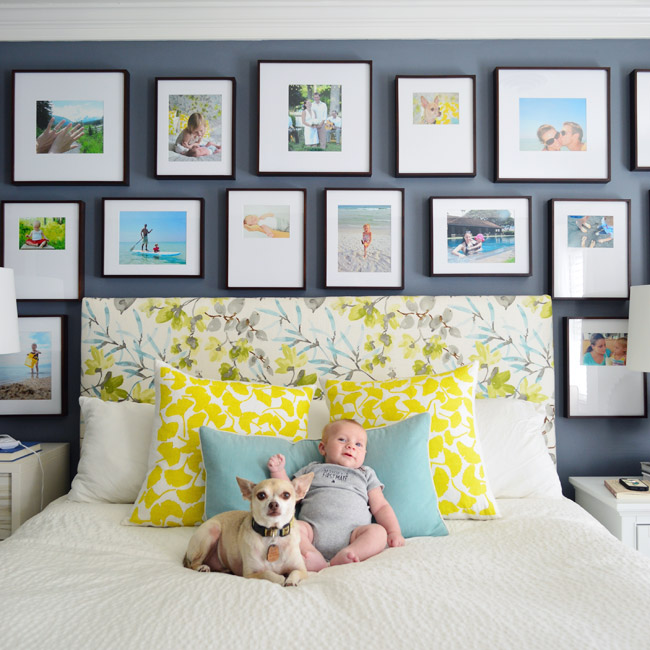 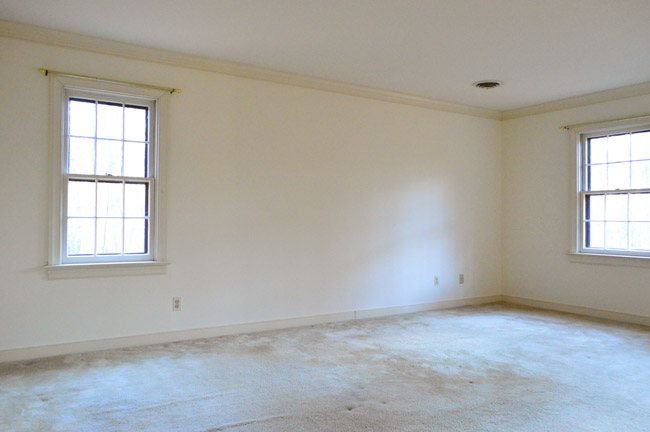 … but we’re certainly grateful for how far it has come. It’s looking a little busy to us right now, but we think a few other to-do list items should hopefully fix that. We’d like a better bench at the end of the bed and a proper set of end tables so we can use the dresser on another wall. We also still have to finish the curtains, need an overhead light, etc. Slowly, slowly. 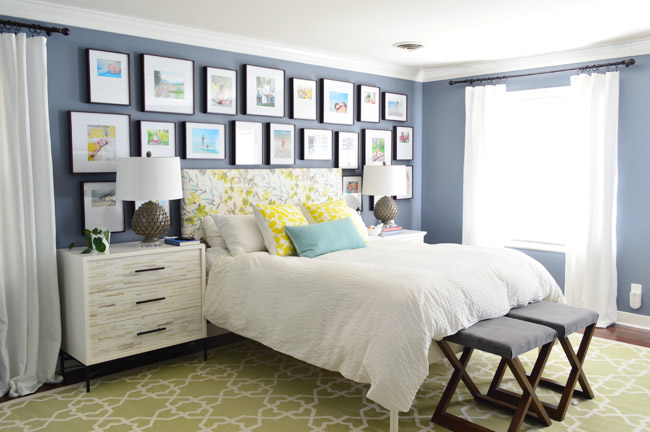 Anyone else doing bedroom updates? Or hanging a collection of family frames? Have you noticed any subconscious themes afterwards, like a love of water, travel, or being in bed? What about eyeballs? Are they all staring out at you? Do they follow your every move, Mona-Lisa style?