Ever wonder what goes into writing one of our posts? No? Well, we’re gonna tell you anyways. Consider it another peek behind the scenes and into our crazy blogging minds a bit further. We probably take our post writing a bit more seriously than most folks (but maybe we should since paying the mortgage depends on it) so we’re certainly not saying this is how it should be done. It’s just how we do it.

In general terms, most of our project-oriented posts go through these stages: from planning & prep through doing & documenting things, all the way to posting & responding to comments. 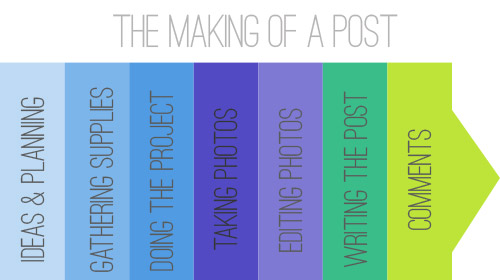 Those of you who write blogs about your home probably go through a similar process. Of course sometimes the process is fast and can happen within a day or two, and sometimes it’s quite long (as you’ll see in a moment). And on any given day, we’ll be juggling a few different projects/posts that can be at very different stages since we usually share eight of them in a five day span. The chart below is just hypothetical, but the dotted line shows how at any one time we could be writing a post about one project, while doing, planning, or responding to comments on several others. 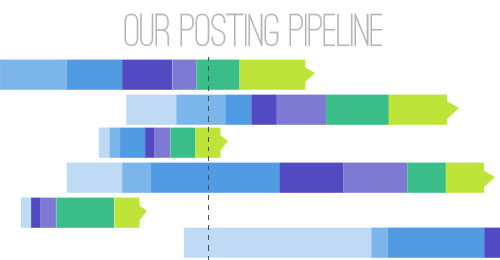 But we already covered what any given day could look like, so let’s turn back to the purpose of this post: following the path of a post. Let’s use our bathroom mirror project from earlier this month as our example, since it was a bit of a (mis)adventure in its own right. 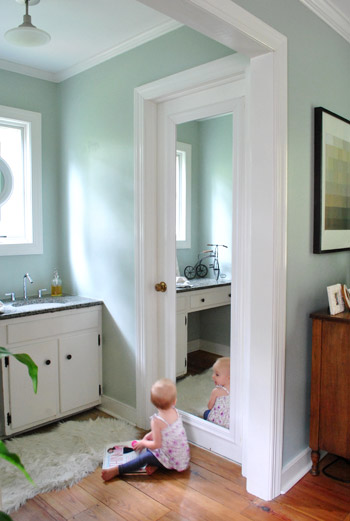 8:30 am-ish: Sherry realizes it’d be good to have a last minute one-day project to share in the coming week – specifically on Monday (aka tomorrow) morning. Yikes. I suggest framing out the bathroom mirror since it has been something on our list since January and it sounds pretty simple. Sherry likes it, so I scout the web for some tutorials / advice (including Layla & Kevin’s experience) to help send us down the right track.

10 am-ish: After breakfast, we all hit up Lowe’s to stock up on supplies – i.e. mirror adhesive and trim (Clara “drives” the cart while Burger rides in the back – gotta love that dogs-allowed policy). We like doing things like this together so we can both come to an agreement on materials (like trim in this case, which comes in a ton of sizes and shapes) instead of one person staying home with Clara while the other one nervously makes all the decisions alone. 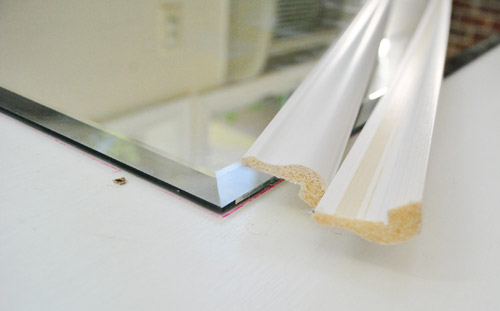 11:30 am-ish: Now home, Clara goes down for a nap and I dive in by taking “before” pictures of the door and then remove it. Sherry’s in the office writing another post for that week. 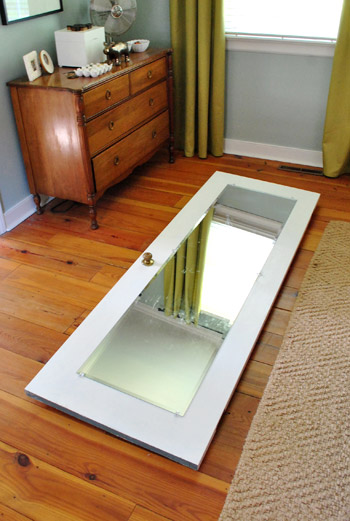 1:00 pm-ish: The project is slow going since I take a few more pics of the process than I end up using, but it never hurts to have more to choose from when it comes time to write the post. I finish putting the glue on the door, Sherry helps me place the mirror, Clara’s starting to wake up… and that’s when I realize that the directions on the adhesive say to wait at least 72 hours before sealing the edges. Crap. There’s no way this will be done in time to share Monday morning (or Tuesday or Wednesday for that matter). We kick ourselves for not thinking of that. Time for Plan B.

1:15 pm-ish: Plan B is the pallet compost bin I’ve been wanting to make. Sherry’s lukewarm on the idea (afraid it will also take too long) but it wins because we already have all of the supplies (i.e. pallets & screws) on hand (and shopping for supplies and doing an entirely new project isn’t likely to be accomplished in such a short time period). Sherry feeds Clara lunch and I head outside. The rest of the afternoon is spent making, photographing, and writing about the pallet compost bin (Sherry is beyond relieved that it’s done) as the mirror sets in the sunroom.

10 am: Pallet compost bin post goes up, no one is the wiser (until now) that it was a pinch-hitter post. The mirror is still setting… 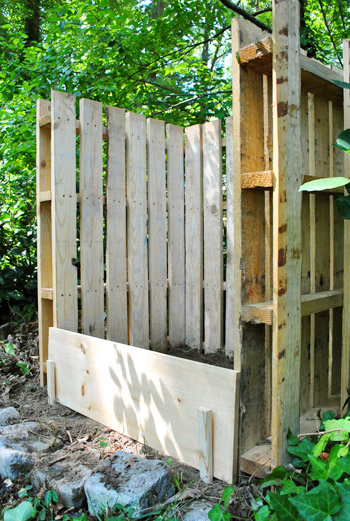 9:00 am: My mom is over to do her regular three-hour Wednesday morning babysitting, so I use it as an excuse to return to the mirror project (even though I’m a couple hours shy of the 72 wait time) while Sherry begins wrestling with her rocker. The directions do suggest waiting a full week before sealing the edges, but having had our plan to share it this week already thwarted, we’re determined to at least have it ready to share next Monday. We have guests scheduled for the weekend (because of my cousin’s bridal shower) so it has to get done before Friday.

10:30 am-ish: Taking pictures along the way slows me down a little (trying to match lighting from the previous set of photos is a bit of a challenge), so it takes me this long to realize the 3/4″ trim that we bought isn’t thick enough (looks cheap and flimsy). I hope Sherry disagrees and can convince me it’s okay, but instead she comes to the same conclusion before I can even finish my sentence. Looks like a $5 college mirror (not that we didn’t both have one of those back in the day). Sigh. 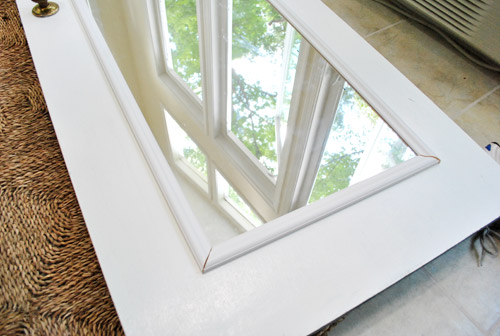 11:30 am: I’m back, thicker trim in hand. Clara’s napping, so my mom has left. Sherry’s busy responding to comments and I fight off deja vu as I measure, cut, and re-take pictures of my new trim process (which is why most of the previous photos were never used). 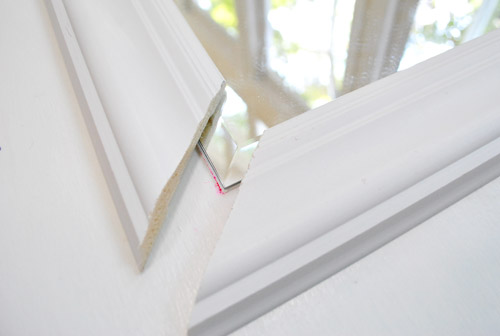 12:45 pm-ish: Thankfully I finish gluing the trim in place before Clara’s up from her nap, meaning that I’m available to go on baby watching duty (instead of having to pull Sherry off of comment-responding duty since so many are coming in at once). Trim glue sets in place overnight. 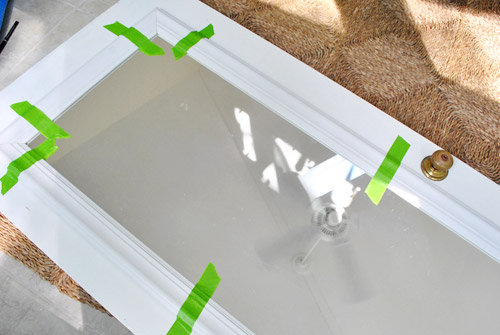 11:30 am: Clara’s down for her morning nap (once again) and Sherry’s doing comments (once again), so I get a head start on cleaning the house before our weekend guests arrive the next day. I figure that it has been nearly the recommended 24 hours set time on the glue, so I’ll “clean up” the sunroom by getting rid of the bathroom door that’s been living in there nearly five whole days. I screw the door back onto its hinges and voila – we’re done!

11:45 am: The excitement of having privacy returned to our bathroom makes me decide to take a shower (Clara naps are extremely valuable for squeezing these in).

11:55 am: Shower done. I’m dressed and on the computer responding to emails while Sherry takes a phone call in the living room. Then I hear “BAM!” followed by “poundpoundpoundpoundpound.” I recognize the latter as Sherry’s urgent footsteps. She informs me the former was the sound of the mirror falling. Sugar.

Noon: Fueled by frustration  – both at myself for screwing up, and at the mirror gods for teaching me not to rush a project – I get right to scraping off the half-hardened glue from the mirror, door, and trim pieces. Scraping was a good way to release some anger, I’ll admit. 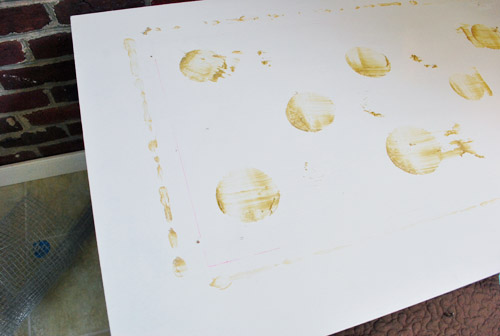 1 pm: Mirror is re-glued (this time with feeling!) and we come to terms with the fact that we’re just gonna have to let this thing set for a full week… and our sunroom’s gonna have a half-completed bathroom door when our guests arrive (not to mention that there will be a doorless bathroom in our bedroom). Oh well, worse things have happened.

Hurricane Irene hits and our guests decide not to travel. Bummed we won’t see them, but at least our chaos won’t be on display to them… not that we had any electricity by which to see it anyways.

8 pm: Clara has gone to bed and our one-week-long timer is about 12 hours from going off. I hesitantly jump the gun a bit, but knowing that we’ll be out of town over Labor Day weekend I have to get a head start. Plus, the sunroom is getting cramped with Sherry’s office cabinet painting which is going on in there too. So with my glue supposedly set and some “security” nails placed around the edges, I lean the door up against the wall (almost vertical) with a pillow at the base of it as an “overnight test.” I figure if the mirror is gonna fall again, the least it can do is fall before I bother with the trim a second time.

8 am:  The mirror survived the night standing up, so I take pictures of the nail system now that it’s light out again. I didn’t bother photographing it earlier because I was still unsure if it would work and already had wasted enough time taking photos of things (the small trim cutting process) that wouldn’t see the light of day. 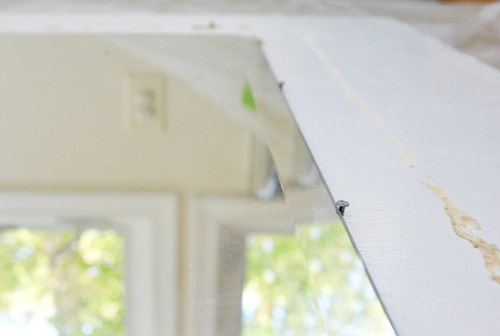 11 am: With Sherry on comment duty and Clara napping (are you sensing a theme about when I get things done?) I lay the door back down and re-glue the trim.

8:30 pm – 10:30 pm: Being out of town for Labor Day forces us to let the trim glue set for a few days, but that means we can make progress when it comes to writing the post (since the project is nearly complete). While my siblings and I watch a movie at my parent’s beach house, I sort and size all of the photos taken so far. Then I write the post, leaving spots for the after photos that we have yet to shoot.

11 am: Traffic got us home too late on Monday to do anything but unpack and fall asleep, so I use Tuesday morning to rehang the door. Sherry suggests that I take “after” pictures before it falls again (such a comedian, my wife) but (1) the light is bad due to the rain and (2) I want to be sure it survives a night before calling it a true success.

8 am: Victory! The door looks great in the morning, so I break out the tripod (it’s rainy again, so not much light – I’ll just have to do my best) and start snapping after pictures. Sherry plays with Clara until she becomes determined to stare at herself in the mirror.

9 am: After photos are taken and uploaded. I quickly size them and upload them into the post. Sherry trades me baby for computer, and gets right to proof-reading since we only have about an hour to go live.

10 am: The post is up. It’s two and half week’s later than planned, but at least it’s up. Sherry camps out moderating comments for a couple of hours while I entertain Clara for another hour-ish before naptime. 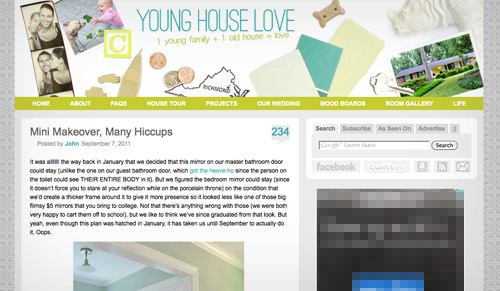 11 am: Sherry’s still responding to comments, so for me it’s back to sizing pictures and writing another post, this time it’s for the office desk top post (which was constructed and poly’d the afternoon before and is currently waiting to fully dry before it gets accessorized, photographed, and posted the next morning). The thing about sharing eight posts in five day’s time is that we always have to have a few in progress, a few in the early planning stage, and of course the finished ones have to be written up and those comment questions need answers. So it’s sort of like juggling eight balls… but in a fun no-day-is-ever-the-same way.

Admittedly that process was a bit more drawn out than a lot of our posts. Some are much quicker (like Sherry’s butterfly art, which only took about twelve hours between beginning to posting) but that wouldn’t have made for a very dramatic story, now would it? Conversely, some projects actually take longer (like our wall to wall desk or our patio or our laundry room – which is why we prefer to tackle them in stages and just share our progress along the way).

Was there anything that surprised you about what goes into a post? What do you do in your job or daily life that’s more involved than some might think?