Alternate punny title: Leaf it to me. Oh yeah, there’s nothing like a little corniness on a Tuesday afternoon. I blame it on being downright giddy to have power again. Ohthankgoodness. Anyway, this weekend before the chaos that was Irene I actually helped with a little bridal shower for our cousin Megan who is getting hitched this fall. John’s mom hosted the sweet informal gathering at her place, and each one of the daughters (and in this case, me the daughter-in-law) were asked to bring a few things. I was in charge of a bowl of candy, and a little bit of table decor. Nothing too crazy, just a few small touches to hopefully get people into the fall spirit (as inspired by Megan’s pretty fall-ish wedding invitations): 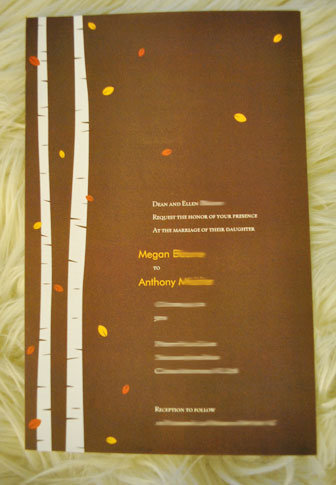 Of course I took it as an opportunity to get all craft-tastic (I tried to resist, but I was powerless against the draw of Michael’s). First I grabbed $2.50 worth of colored paper in a few pretty fall-ish colors. Then when I got home I googled “leaf pattern” and sketched out a few different leaf outlines onto a piece of white cardstock with a pen (I just free-handed them, but you probably could trace them right off the computer screen too). Were they perfect? Nah. Were they leaf-esque? Sure. 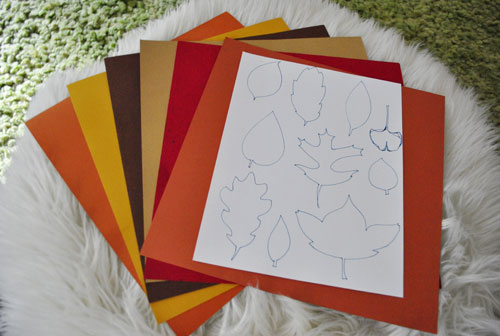 Then I cut them out. It didn’t take ten seconds, but it wasn’t too bad. Maybe five minutes for ten of them. I recommend watching Real Housewives Of NJ in the background to keep morale up. 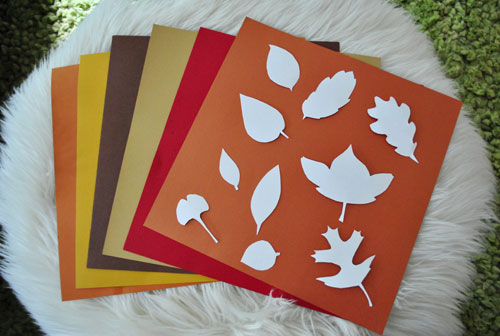 Then I used each cardstock leaf as a template and traced it onto one of my colored craft papers with a black pen. I actually ended up tracing each one a few different times and crowded them in so I’d get as many leaves as possible from each sheet of paper. And yes, I did crack insanely bad jokes like “hey John, leaf me alone” as I went. He was not amused. 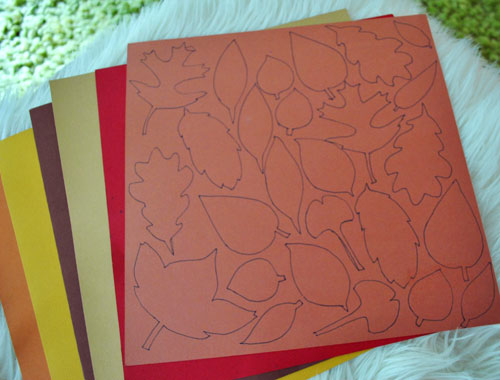 Then I stacked an extra sheet under the one that I traced my leaf shapes onto (so I could cut each leaf out once, but get two out of the deal – each in a different color thanks to the stacked paper). Then I did the rest of my sheets in the same way (tracing the shapes on the top page and stacking the paper so I could cut it once and get a few leaves out of it). Total time spent: an episode of Real Housewives. And surprisingly (because I half expected this crazy spurt of craftiness to be a total bust), the varied colors and shapes ended up being pretty darn cute. 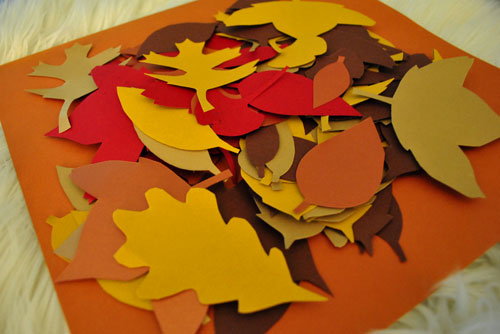 I mean they’re not über upscale and spendy looking (Posh might not demand them at her next shindig), but they’re sweet and charming in that homemade full-of-love sort of way. Which seems to work when you’re casually gathering with family on a stormy day to celebrate love, love, and more love. I ended up sprinkling them down the middle of the table to make a little leaf runner of sorts. 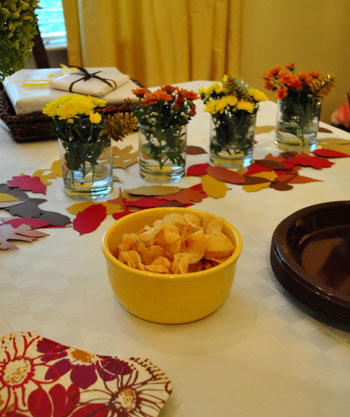 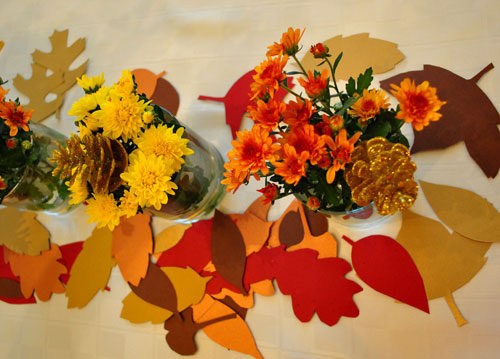 Then came my weird M&M project. I thought tracking down some sort of candy in fall tones could be sweet in a clear cylinder vase (of which we have many, leftover from our own wedding). So when I came across two bags of brown, red, and yellow peanut butter M&M’s at Target, I took the bait and bought them (for around $5 total). Then I sorted them by color in three bowls and stashed each tone in a different ziplock bag so I could bring them with me to the party already-sorted. Oh yeah, and wash your hands before you touch all the candy. In case you’re wondering, I watched last week’s Design Star during this part of the process (I’m hopelessly behind on that show – don’t ruin this week’s episode because we haven’t seen it yet). 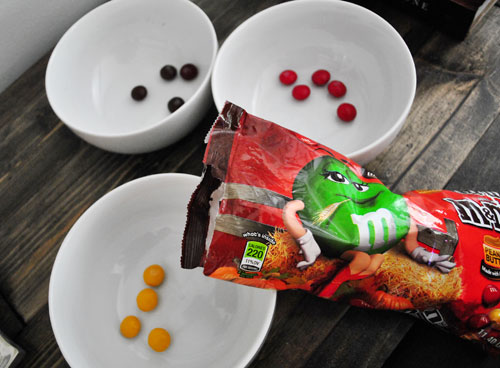 Once I arrived at the party, my big M&M arranging finale took ten seconds. I just poured the pre-sorted brown ones into my big glass cylinder vase, followed by the pre-sorted red and yellow ones. Bing, bam, boom. 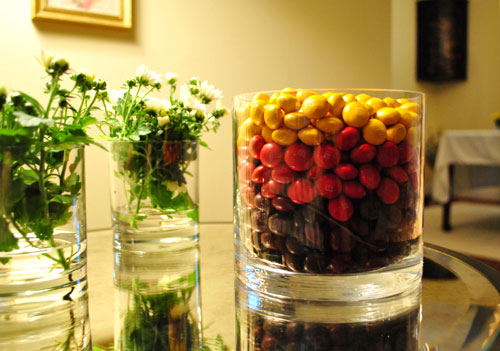 I probably can’t take any credit for the fact that everyone scarfed them down (peanut butter M&Ms are irrefutably addicting in their own right) but Megan and the other ladies seemed to enjoy the little layered look. Weird candy separating mission accomplished.

I also grabbed eight glasses from Target (sold for $2.99 for a set of four, so I spent under $6 total) and John’s mom just took a few clippings from two potted mums that she already had on the front porch to make eight mini bouquets to fill our glass “vases.” I loved the idea of using already-owned potted mum clippings because there are about a million blooms covering them, so it’s way more bang for the ol’ buck. We probably would have needed to buy at least four bouquets of flowers to fill the eight vases that our two mums easily covered with plenty of blooms to spare (we tried to clip from the perimeter/underside of them, so the remaining plants will still look nice and fresh out on the porch for a few more months). 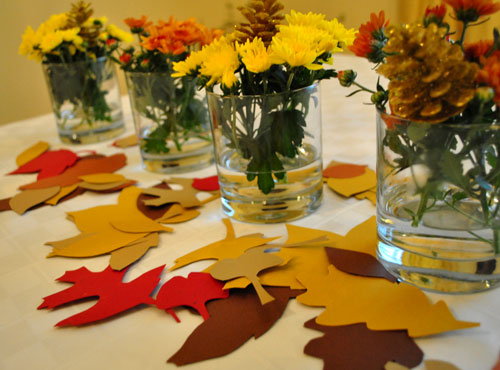 So with the cups-turned-vases filled with mums and my little paper leaves spread down the center of the table like a festive little runner, it was time for one last touch. Oh yes I did buy six little glittery faux pinecones from Michael’s for 50 cents a pop. Guilty as charged. I can’t help it. I’m like a magpie when it comes to shiny things. Especially shiny fall-ish things in the golden color palette of the leaves from Megan’s wedding invitation. They conveniently came on a little wire (I think they’re made to be stuffed into bouquets or wreaths) so I just stuck them randomly into a few of the little mum vases (which we sent home with each guest as a small party favor). 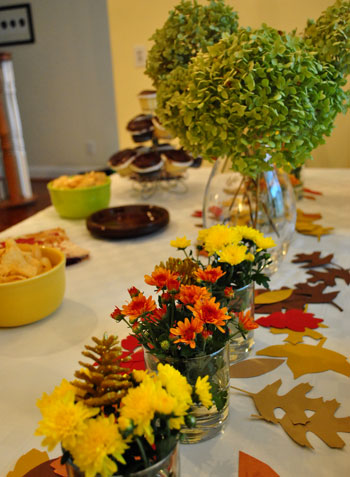 It was a sweet little party. Even though it was rainy and gross outside, it was warm and happy inside. And I don’t mean to harp on odd things like glittery pinecones (I’m from Jersey, ok? Maybe that explains it), but they seemed to be quite the hit.

Oh and check out this cute thing John’s mom put together. We all played one of those how-well-do-you-know-the-bridge-and-groom games, and she hunted down fall-colored ribbons and tootsie pops to tie on top of each clipboard, which she also sent home with each guest. So yeah, come to our family’s showers if you want to leave with vases of flowers, glittered pinecones, ribbon slash tootsie pop riddled clipboards, and M&M hangovers. Do we know how to party or what? 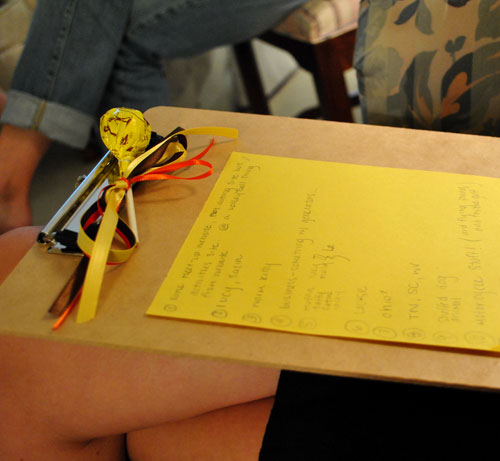 My favorite part of the whole celebration was when Clara and her cousin Jake serenaded us. Once again proving that random is good. Bring on the paper leaves and faux pinecones! And don’t forget that baby solo to end things with a bang. 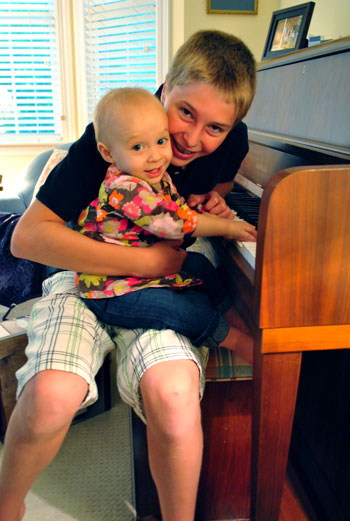 Oh and because you know I love a little budget breakdown, here are all the supplies I grabbed:

Not bad for eight flowering favors in little glass vases, a festive fall-inspired table runner o’ leaves, and a quirky color-coded dish of M&Ms. I just liked that it felt more Megan-specific to DIY a few things than run to party city and spend $20 on plastic tablecloths and crepe paper. But enough about my insane propensity for faux nature and glittered anything (why yes I did own a bedazzler in ninth grade). Have you guys whipped up any crafty little homemade-with-love party decor? Ever arranged candy by color? I think that takes a special kind of crazy. And I’m happy to wave my little yes-I-sorted-M&Ms-by-hand freak flag nice and high.