We found these babies at a yard sale and haggled them down to $10 a pop. Let’s call them our twig & berries. 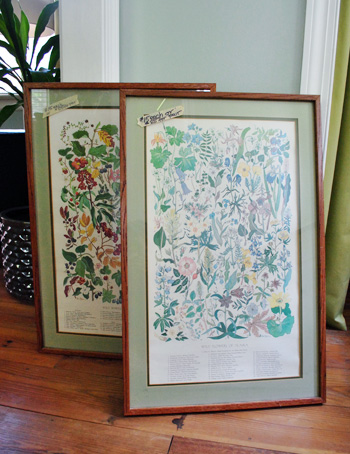 We immediately thought the extra tall shape of the frames would be perfect for either side of our bed above the glass based lamps on the makeshift just-for-now side tables (they’re way too small and don’t have any drawers for storage) on this very unfinished side of our master bedroom: 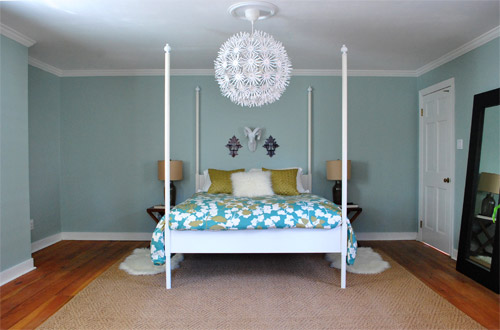 We definitely had plans to change out the art. They’re prints of the berries and wildflowers of Alaska (which is kind of fun and fitting since we honeymooned there) but they felt a bit too grandma for us.

But we loved the long rectangular shape of those $10 frames. So we hung them up, just to see what we were dealing with. Don’t mind all the blank space on either side of the walls, we still have furnishings to add to fill up this cavernous room. And once we change out the side tables we might rehang the art a bit further out from the bed or higher up depending on the new furnishings. 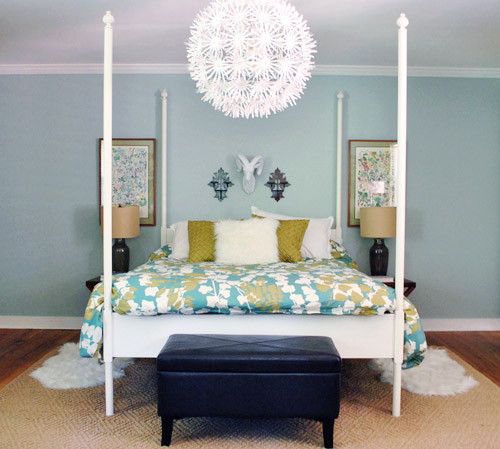 We definitely liked the shape of our new frames, but we weren’t crazy about how the warm wood tones sort of clashed with the darker tones in the thrift store wood candle holders on either side of Sir Ram above the bed… 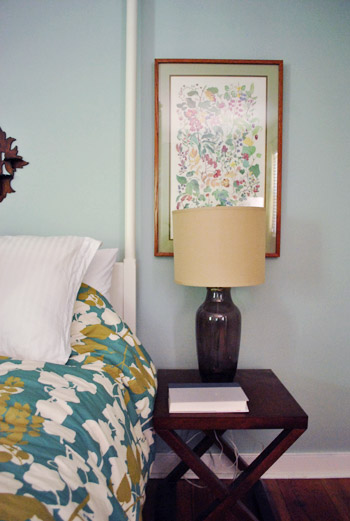 … along with the leaning mirror, and the leather chair in the corner: 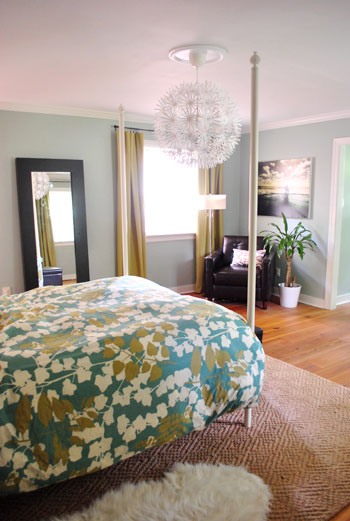 And yes, we’re aware that not all couples aspire to sleep under a giant resin ram head. We are indeed a rare and special breed. Akin to centaurs and unicorns. Speaking of that above-the-bed stuff, we originally mentioned that the maybe-too-small-art might go, but months later it’s still there and has strangely grown on us. 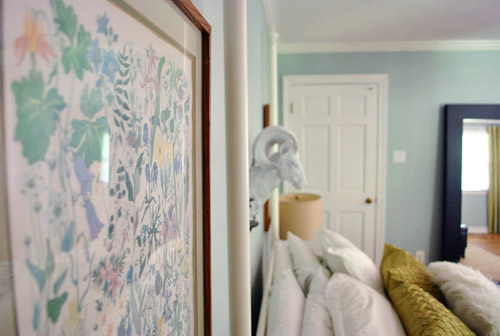 But back to the yard sale frames. I actually decided to do something completely insane for me when it came to them (but totally ain’t-no-thang for anyone else). I opted to spray the frames with oil-rubbed-bronze spray paint. I know you might think that given my recent ORB kick (here and here and here) this isn’t news. But, you my friend, would be wrong-O with a capital O. Why? Because virtually every frame that we own is white (both in this house and our first one) and we must own five million of them! Dark frames have never been our preference. White is my eternal jam.. 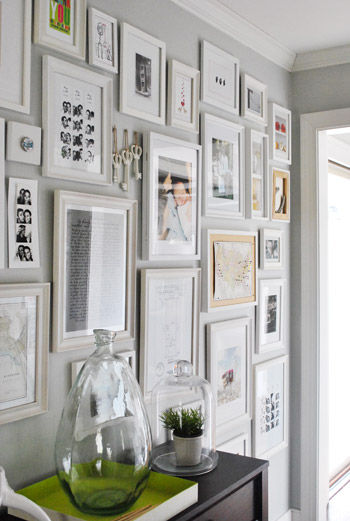 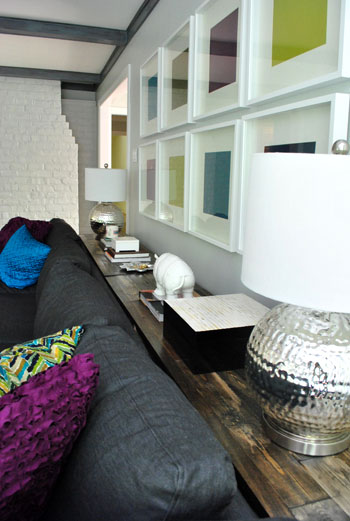 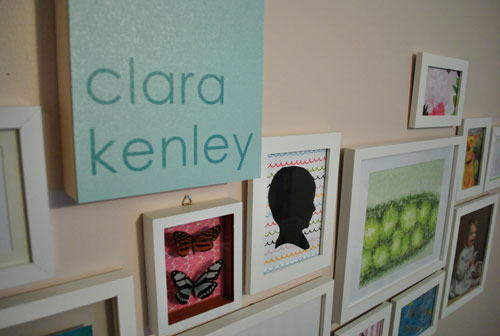 Until now, apparently. Total curveball. At least to a white-frame loving fool like me.

I’ll spare you the spray painting play-by-play (you can find some general tips here) except to point out these two things: 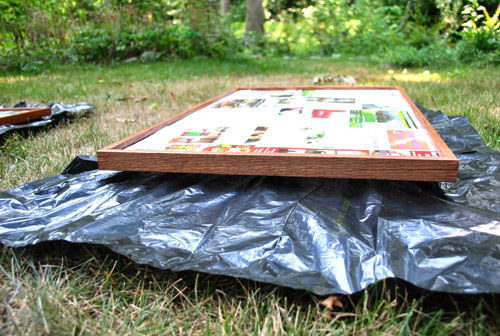 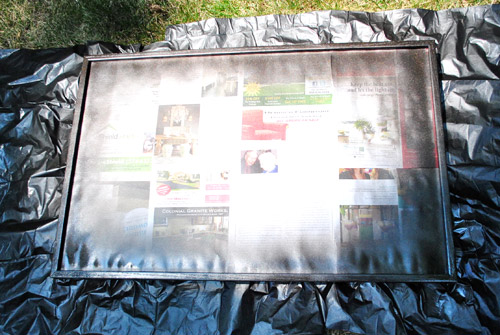 While I was at it I carefully removed the mats and sprayed those white for a cleaner look. 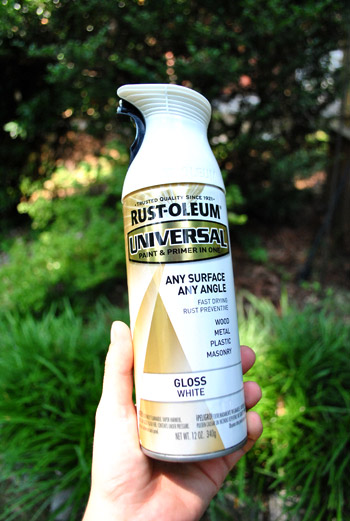 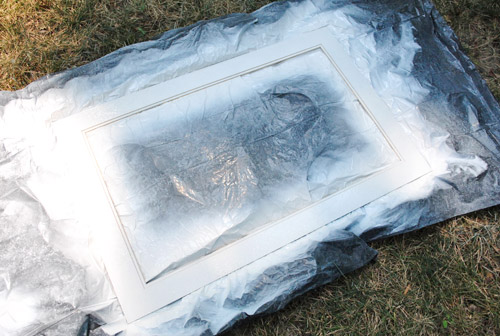 Now brace yourself for the hottest picture you’ve ever seen on the internet: 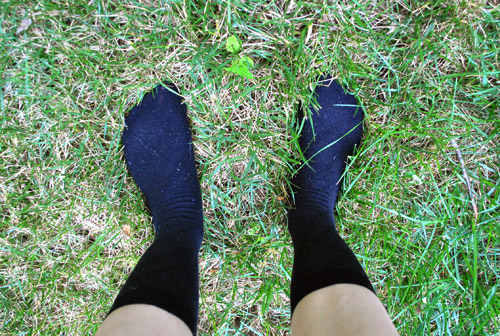 My white mom legs + black dress socks = sexy beast. I can’t believe I’m sharing this, but the whole dark sock thing is actually a spray painting trick I implement nearly every time. Instead of worrying about getting rogue drips on my shoes or flip flops (or my feet, which I could then track into the house) I just don some dark socks, spray to my heart’s content, and slip them off at the backdoor so I don’t track anything in (and don’t have to worry about scrubbing my feet or ruining my favorite shoes/flip flops). As for the rest of my outfit, I’m nude. Just kidding. I wear painting clothes that I do not slip off at the door (big drips only seem to fall on my feet).

A few minutes after snapping that photo was when John and I both started giving each other crazy eyes. Which means we were both having strange and exciting ideas (ideas that are completely unrelated to bedding each other under the ram – get your mind out of the gutter).

John: “What if we put those old botanical-looking prints back into these now that the mat and frame is all updated and graphic?”

Sherry: “Just to be suuuuure we’re completely over them – I agree!”

So we hung them up and we really liked them. So we are in fact completely under them (you know, as opposed to over them as we originally anticipated). Sure, they’re still a little grandma, but they’re also something we could picture in Elle Decor or House Beautiful (with more than a $10 price tag on them). And most of all, they make us smile. 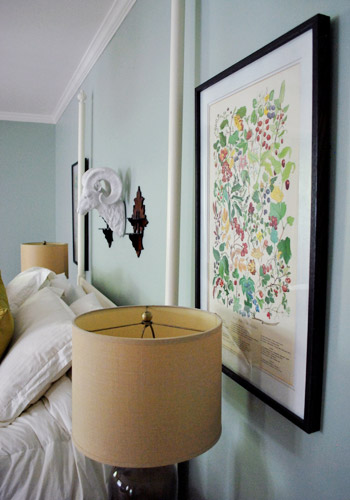 Here’s where I’ll stop to acknowledge that not only is hanging a big white ram head over your bed one of those maybe-I’m-crazy things, art in general is definitely a place where all folks on the internet won’t come together and unanimously agree. But we’re loving our twig and berries – er flowers and berries. I mean it’s not like we’ll ever entertain in our bedroom – so we don’t have to worry about what other folks might think. Which I hope is nothing weird and kinky due to the ram. Yikes.

Speaking of weird, we got an embarrassingly huge kick out of hanging the berries on J’s side and the flowers on my side. You know, because ladies have flowers and guys have berries. Too far? My deepest apologies.

Then something crazy and completely unexpected happened (manage your expectations, our lives are not that interesting).

John decided to exercise his veto power on the leafy duvet cover that we ordered around seven months ago.

Didn’t see that coming did you? See, back when the duvet cover was one of the first things we bought for our house (deeply clearanced from West Elm) John agreed that we could get it (we have a full agreement agreement, meaning we’re not allowed to buy things without both being ok with it). But he only agreed with one stipulation: that it wouldn’t necessarily be a forever choice. He reasoned that it was affordable enough and I loved it enough not to keep me from ordering it (I was so worried it would sell out and I’d forever regret it slash hold it against John The Tyrant). But he asserted that if someday he should decide that he no longer liked it I would have to be open to looking for something else that we both could love – especially if the price was right and we could sell this baby on craigslist or something.

At the time I grinned and nodded, never thinking that day would actually come. But wouldn’t you know it, John loved those 10 dolla (holla!) yard sale art infinitely more than the compromise duvet. So he decided we should revisit the whole new-duvet-cover-idea and leave the art as-is (since it was kinda circus-y and compete-y to have them both going on at the same time). And you know what? In an even more shocking turn of events I agreed.

Maybe we’re just sentimental suckers and sleeping between prints of wildlife from the place we honeymooned is our idea of romance? Maybe we think rams and flowers and berries somehow belong together? I don’t know. Either way, the leafy pattern in the duvet cover was fighting with our new leafy art so I stripped things down to our white duvet insert from Ikea and we stepped back to survey the scene. 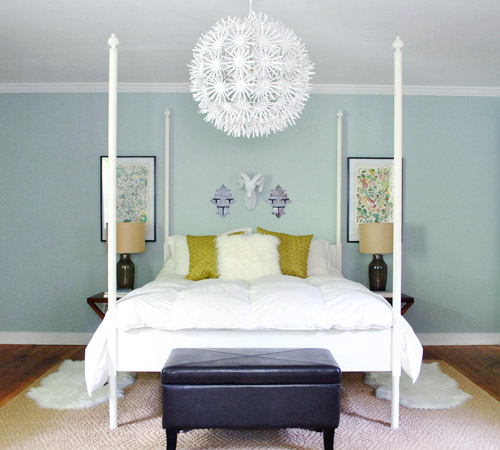 The weird white duvet insert was definitely more compatible with the art than the competing leafy duvet cover, but not quite perfect. Meaning a white duvet cover isn’t going to be what we go for. We’re hoping to find something with less of a bold pattern and more of a subtle texture (like a soft chevron or crosshatched design or something striped or something else entirely). The jury is still out on what will come home with us, but we’re planning a few HomeGoods and TJ Maxx runs just to see what’s out there. And maybe even an Ikea road trip. 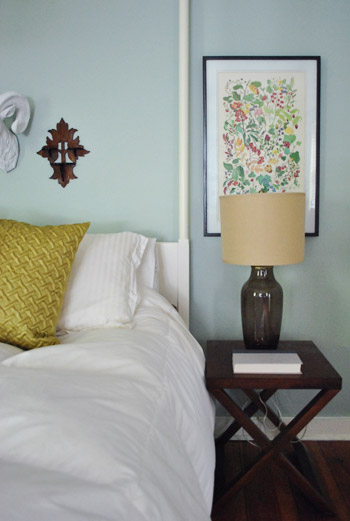 The lesson? Grrrrr, don’t compromise. Just hold out to find something you both love. Oh well, hindsight is 20/20, right? And I like to think the Alaska prints “found us” because it was meant to be. And we certainly had our fair share of decorating mind-changing in the first house, so it’s only fitting that we work in a few control-alt-deletes in this house too (look honey, it’s a bad computer joke that I threw in just for you).

So yeah, we’re thinking about selling the old duvet cover on ebay or craigslist. There are some on there for over $100 and we only paid $42 for our king-sized guy thanks to sales and coupon codes. So who knows, maybe we can recoup the entire cost and list it for $45 in great-but-slightly-used condition. We shall see… 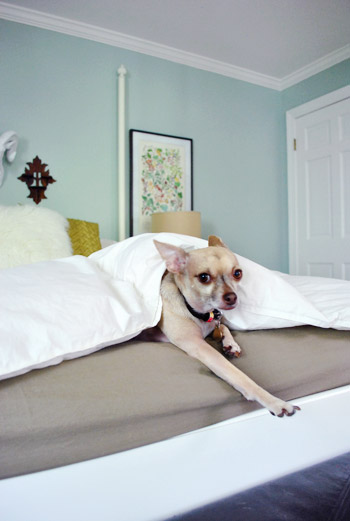 As for what the kids think, Clara toddled into the bedroom and gave the new art two thumbs up (not lying, but she does happen to do that gesture a lot). And Burger gave it one paw sideways. He’s such an art snob.

Do you guys have any duvet cover switches or “rewinds” going on? Has anyone else had their man exercise veto power in a surprising but serendipitous-in-the-end way? Does anyone else spray paint while wearing black dress socks or sleep under a white resin ram? Yeah… probably not.

Another Unsuccessful Attempt To Keep It Cool
House Crashing: Style For Miles