Nothing like a little weekend chaos. Guess what we did this weekend? Here’s a hint: 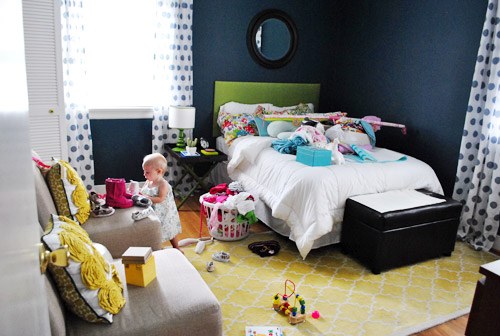 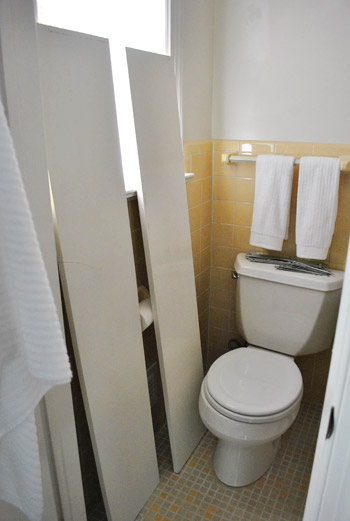 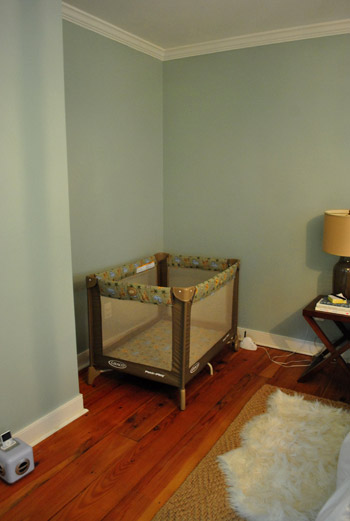 And one last hint: 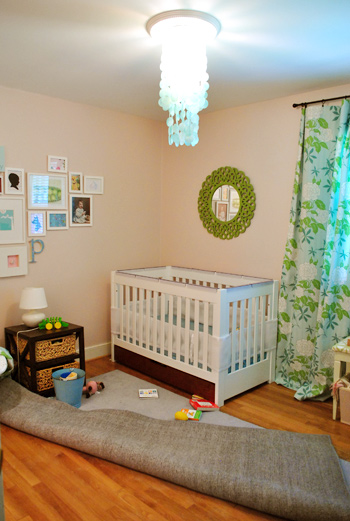 Um yeah, all that house insanity was for this: 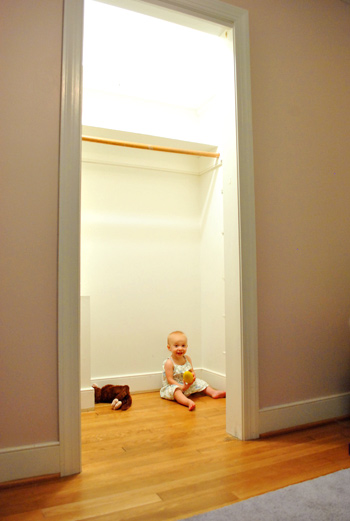 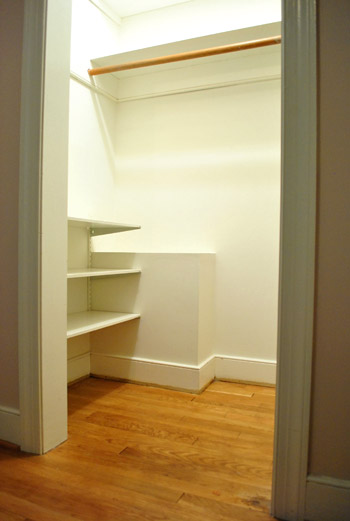 See, whilst standing on a chair in there hanging the little ribbon chandelier that I made last week (you know, right before John asked me how it was hanging), I decided it was high time we painted that little future-reading nook for the bean (we envision a big cushy beanbag and a ton of books in there for her to dive into). Isn’t it funny how one small project can snowball? One minute you’re standing on a chair hanging a ring o’ ribbons and the next minute you’re tossing a ton of stuff into the guest room, stashing shelves in the guest bathroom, setting up a pack & play in your bedroom (to allow for painting while Clara naps in there), and rolling back the ol’ nursery rug to keep it paint-free.

As you can see in the picture above and below, there are already some pretty sweet adjustable shelves for books and toys and all that hoopla when we turn this closet into a closet slash reading nook (Clara’s nursery was the former owners’ office, so the shelves were used for all of their paper and file storage- but it definitely works for board books and blocks too): 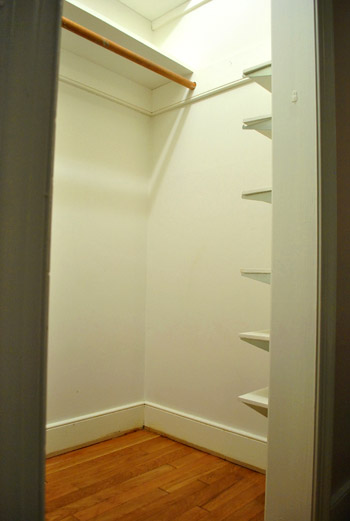 But it could definitely use some freshening up. Check out the grody baseboards: 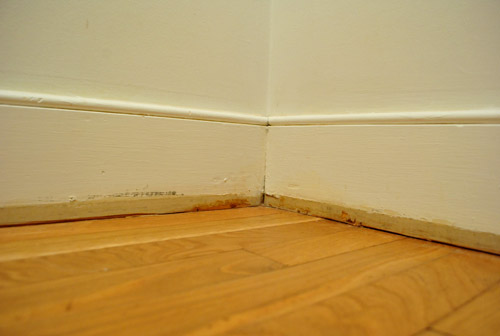 And the hanging bar that appears to be gnawed on: 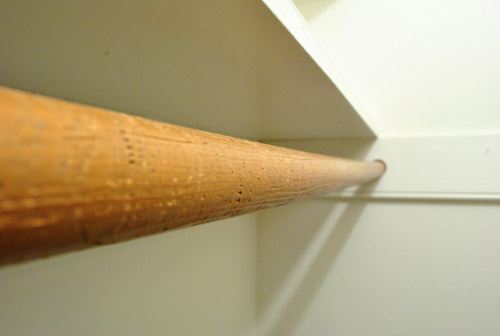 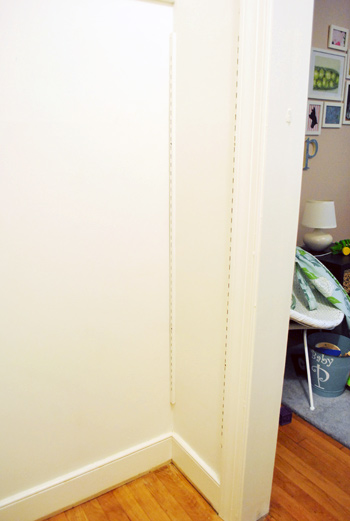 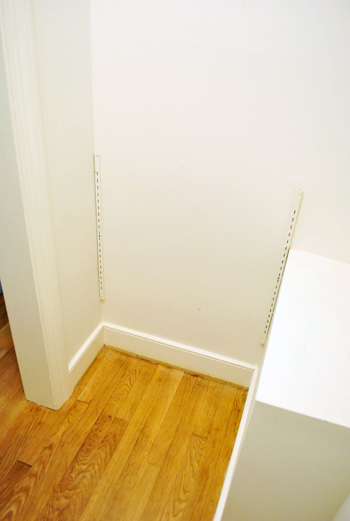 … so I could paint all the trim and that hanging bar with some slick semi-gloss white paint (Olympic No-VOC paint in off-the-shelf-white).

It was already a huuuge improvement. John and I went back and forth about what color we should paint the inside of the closet. In our first house’s nursery, the walls were soft pear and the closet was a fun light aqua color along with the ceiling. And we loved that. But since we went with a soft gray-pink in this room we didn’t want to do the same blue closet and ceiling thing all over again. So we decided that we should try something with texture instead of a new color. Like a pink tone-on-tone stencil. That way it’ll feel connected to the nursery while having a little somethin’ extra in the pattern department – maybe even something subtly metallic. But nothing too loud or crazy since there’s a bright floral curtain that hangs at the closet entry as well as on the windows across the room. 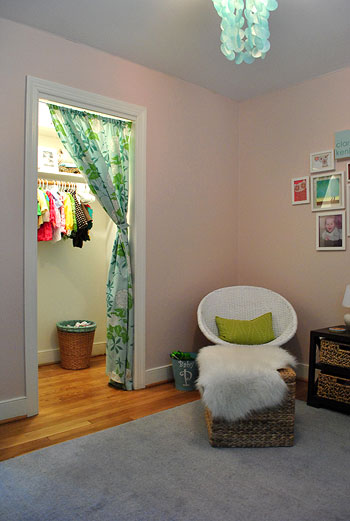 You know that fine line you walk between fun & playful and crazy & chaotic? Yeah, we figure if we have plans to add crown molding along with paint and possibly a stencil to the nursery ceiling we shouldn’t go too nutso on the closet – especially if it’s for quiet book reading/baby chillaxing. So for zero dollars and zero cents we opted to paint the closet the same soft gray-pink tone as the nursery walls (Proposal by Benjamin Moore color matched to Olympic No-VOC paint). Thankfully we still had some left from painting those walls back in December (<– cutest Clara pic ever in that post, bee tee dubs). But back to the painted closet. It’s a nice clean start. 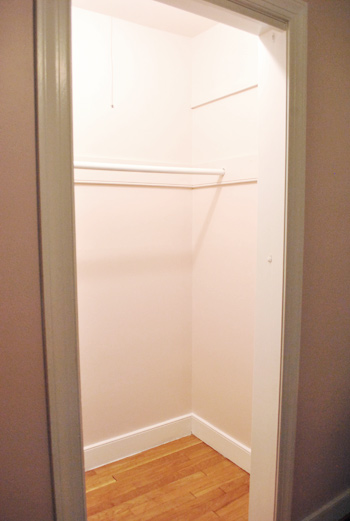 Even before it was dry I got into one of those moods (you know, when $herdog comes out and she decides to fly by the seat of her saggy gangsta pants). So I dragged the whole family to Ben Franklin (weekend family time = clearing rooms to paint, painting while the bean sleeps in a pack and play in your bedroom, hitting up the craft store) where I grabbed some 99 cent water-based metallic craft paint in pearl white and champagne (all the metallic paint at the paint store is $20+ and not quite VOC free yet- but this stuff should hold/wear as well as latex paint unless Clara takes a pressure washer or some sandpaper to it – and it’s a lot less fumey). I also grabbed a cute little $1 rubber stamper with a girlie medallion on it. 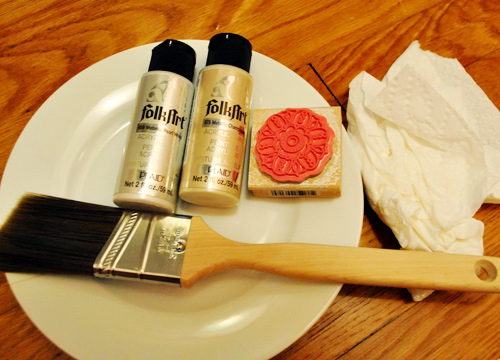 Do you see where this is going?

I decided it might be cool to apply some sort of hand-stamped pattern to the wall with that rubber stamper instead of a traditional stencil so it looked kind of irregular and imperfect like handmade wallpaper. And I loved the idea of layering the soft champagne color over the light pink walls so it would be subtle enough not to take over the whole nursery or anything (I also grabbed the pearl white paint in case the champagne was a bust). I envisioned it being this little glittering magical world for Clara to duck into and get lost in a book.

So instead of focusing on how long hand stamping the entire closet would take I thought about how much Clara would love it. And crossed my fingers that it would work. Oh and it bears mentioning that John predicted that it would not work at all because rubber stampers are for paper & ink and not walls & craft paint. Who brought the killjoy to the craft store? I did. But I also had the inspiration with me (El Beano). So I walked out semi-confident in my spur-of-the-moment idea. 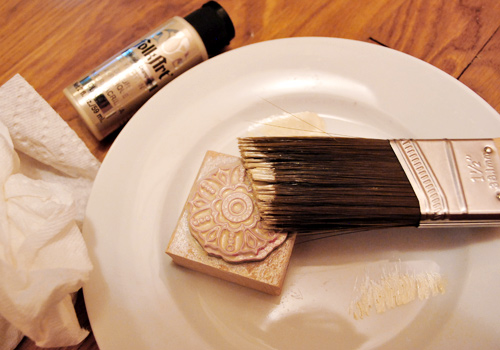 As for application, I learned by experimenting with some paper first that the best way to get the paint applied nice and evenly (and not too gloppily) was to lightly brush it onto the stamper with a paintbrush. I used a completely out-of-the-way corner that can’t be seen from the doorway of the closet for experimentation (it would also be covered in shelving and could be repainted with pink paint if all h-e-double-hockey-sticks broke loose and my little stamp method was a bust). 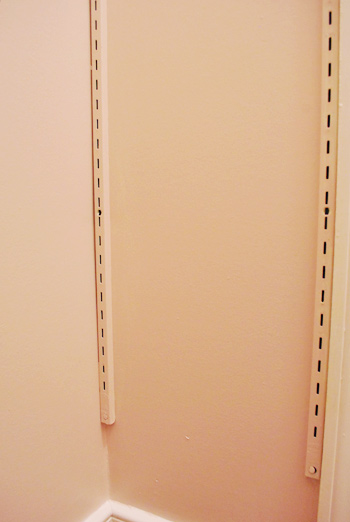 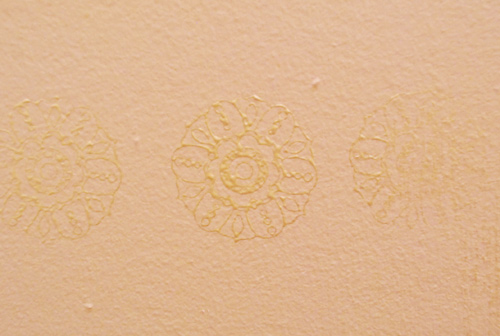 I loved them but they were way too subtle and finely-detailed in person. It almost looked like someone with gold lipstick kissed the wall since you couldn’t quite make out the medallion shape (and from the side they looked kind of bumpy and odd). They actually photograph a lot better than they “read” in real life, which is a shame because I didn’t want John to be right. But alas, it wasn’t the right answer for the closet. So it was back to the drawing board. Literally. 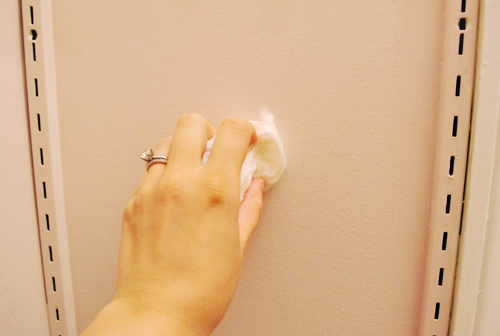 That’s right, in a serendipitous turn of events I tried wiping down the still-wet paint with a wet paper towel and it lifted right out. Well, not right out. I had to put some muscle into it and really scrub, but it came out with a little elbow grease so I could start over. And I was mighty impressed with my painted-earlier-that-day wall for holding up to all the manhandling going on so soon after the paint went up.

And yes I did say “so I could start over” a few sentences back. That’s right. I wasn’t done with my crazy craft paint yet. This time I was wondering if I could freehand some sort of fun painted pattern with the same champagne paint (using a wider brush than the rubber stamp so it would hopefully be easier to make out and less detailed/muddled). 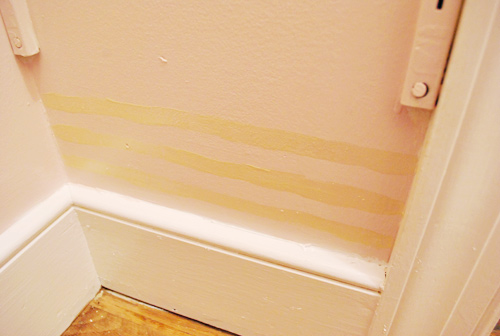 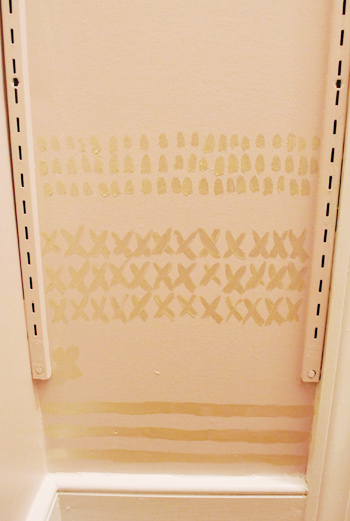 Before wiping anything away I called Killjoy John and Happy Happy Joy Joy Clara in for a consult. Clara wanted to kiss the x’s (I kid you not – I think the girl’s smarter than a fifth grader) and John and I both liked the horizontal stripes best. But we weren’t sold enough to slap them all over the walls quite yet. Sometimes holding back is hard for me, but it’s easier for John. He pointed out that we never regret thinking things through just a little bit before rushing in and doing something we might not love as much as something else in the long run. Especially when said project could potentially take five days and make you see stripes when you close your eyes for three more days after that. Bah, voice of reason = annoying, but right. Point taken.

So because I was incapable of getting off the stamped/painted/stenciled train, to the internet my fingers flew, where I found this cute stamp that I love. John is also (miraculously) down with it – maybe because I joked that it looked like wi-fi to him. 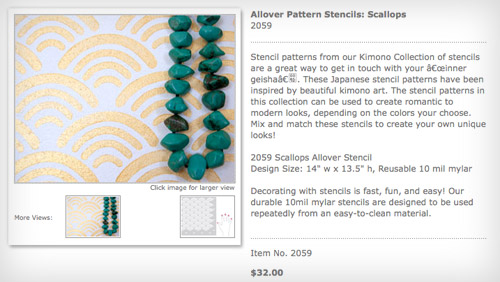 It reminds me of the scalloped fish-scale-like piñata that I made for the bean’s birthday. And since Royal Design Studio offers 10% off to YHLers (including us, haha) with the code YHL10, we’re definitely considering springing for this guy. Especially since we didn’t have to pay for wall paint since it was already on hand and we found metallic paint for $1 a tube at the craft store. I haven’t ordered the stencil just yet, but I’m definitely thinking about it. And now that the ribbon chandelier snowballed into a closet painting project, I guess I should mention that I’m also thinking about:

Oh and speaking of the ribbon chandelier, I still haven’t ironed that guy (girl?) yet. Maybe I should add that to my bulleted list so I’m inspired to get ‘er done (you know I love to cross things off). Or not. Oddly enough, the windblown look is still doing it for me. I know, I’m a strange and mysterious creature.

Speaking of which, we only have one True Blood Season 3 DVD left (with two episodes on it) and we’re sad and excited all at the same time. Since I had fun with the Sookie sidechat on Friday I thought we could discuss teams. I’m Team Eric. Is anyone on the Bill trolley? What about that Alcide guy? I’d get on that before the Bill boat for sure, but Eric is definitely mah man. Oh and I forgot about Jason Stackhouse. He might be above Alcide for me. Hmm. Anyone else painting or stenciling a room? A closet? Let’s chat about home stuff or tv or something else entirely. Anything. Does that sound desperate? Sorry. I’m just a chatty lady who has been stuck in a closet all weekend…

How To Hang Your Ironing Board On The Wall (The Easy Way)
Fab Freebie: Who’s The Joss?