Top o’ the built-in to ya! On Monday the bases to our nursery built-ins were complete, and now (yes, you guessed it) so are the tops… well, except for some caulking, paint touch ups, and crown molding to finish things off. 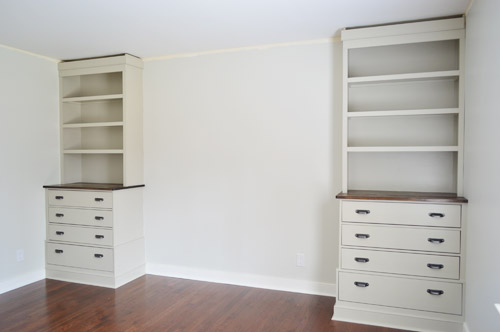 We’re really happy with how they’ve turned out, and Sherry is about to explode from waiting to fill them in (I’m making her wait until we’ve finished all of our final caulking and paint touch-ups along with the rest of the room’s crown – I know, THE NERVE). But let me show you how we got to this stage, because the tops took a bit more planning than the bases did since I was building them from scratch. 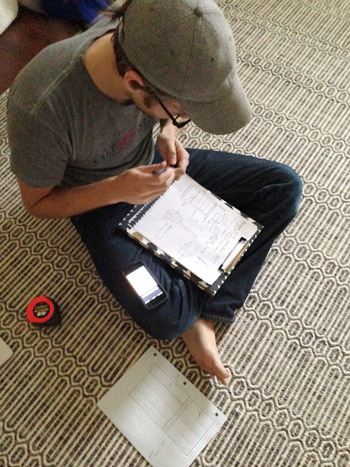 We decided to build from scratch since we couldn’t find any pre-existing bookcases that would fit in that space. We went with plywood for the material – specifically, this PureBond eco plywood from Home Depot, which is formaldehyde-free (along with chunky wood trim pieces to beef up the sides and the shelf fronts). A 4ft x 8ft panel of that eco plywood is $47 so I figured out ahead of time how to get the most out of one piece. I still had to buy another 2′ x 4′ piece to get my last two shelves, but otherwise I was pretty proud of figuring out this puzzle. 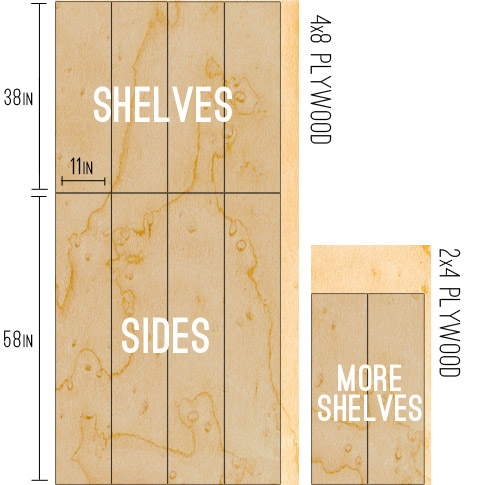 I got all of these pieces cut down in the store, which made life much easier – especially since their big saw locks in place, so I had more confidence that my pieces would be consistent widths. Luckily the Home Depot guy was having a slow day so he was happy to oblige. They were small enough to fit in my car by this point, but since I was also buying a bunch of long pieces of crown molding for the rest of the room, I went ahead and rented their truck to get everything home for $19. 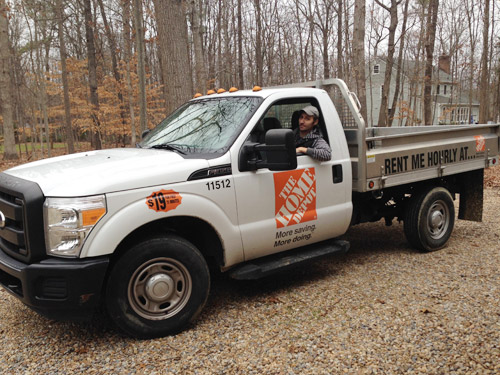 We tried to paint all of our pieces BEFORE installing them, since it’s typically easier to paint things when they’re laid out on the ground or leaned up against the wall (without having to worry about edging or cutting in around stuff). Here are the tall side pieces drying. 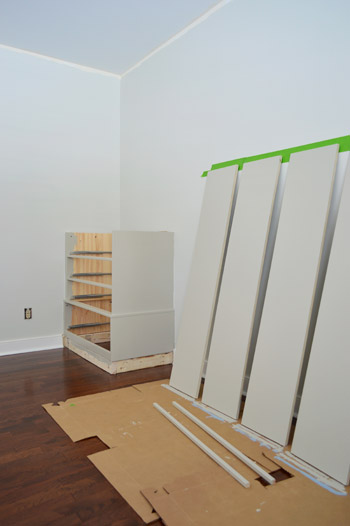 Once they were dry and the bases were finished, I attached one side piece directly to the wall (into a stud in a few places, to make it crazy secure). 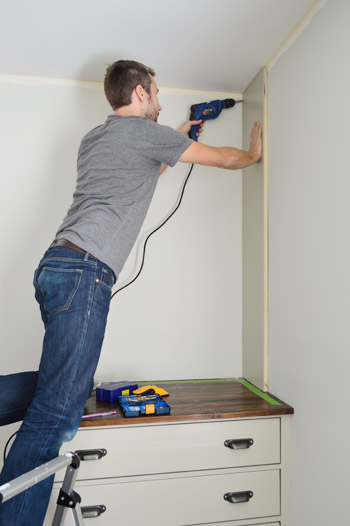 Then I attached a thin brace piece (a strip of 1 x 3″ that I had cut and painted already) along the top into a couple of studs. This piece wouldn’t do anything visually (it would later be hidden) but it gave me a place to attach the second side piece. I screwed right through it into the end of the brace. You’ll note that we’re just relying on the wall to act as the back of the built-ins rather than attaching a plywood panel. We did this mainly for cost and simplicity purposes (we can always paint it a bright color or slide in foam core or cardboard covered backs with fabric or wallpaper to spice things up a little later). 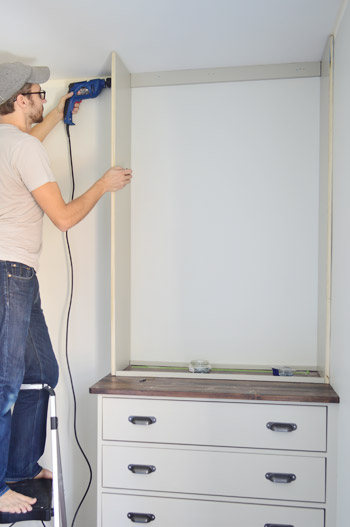 That second side piece would gradually become more secure as I went along, attaching more braces and shelves. But to keep it as square as possible as I went, I temporarily attached a board across the front (which I later popped off). You’ll also note some pieces laying there at the bottom helping to keep things square down by the base of the bookcase. 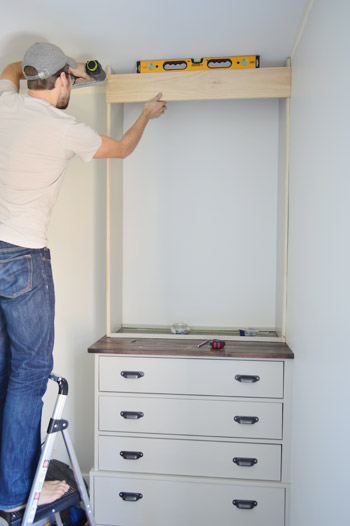 With the sides in place, I could start building our shelves, so I marked along one side where each of them were going to go. 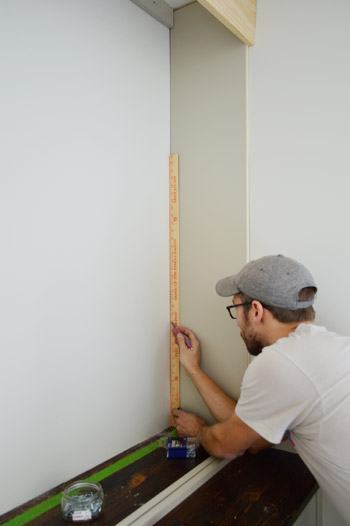 The night before this Sherry and I had played around a bit with where we wanted them to sit. We decided on doing three shelves (creating four cubbies) because it seemed like the most balanced look to us – not too cramped, not too spacious. We went for permanent shelves, rather than adjustable ones, because we thought they’d look more polished and would accommodate most things since they’re pretty standard sizes.

We typically like our shelves all evenly placed, but we noticed that this made the bottom shelf look a little small for some reason when we taped things out. Then we came across this room and really liked the spacious bottom shelf design, so we gave ours a few extra inches of breathing room too – and here’s where we ended up (the painter’s tape represents the width of each shelf). The depth of all of the shelves is 11″ by the way. 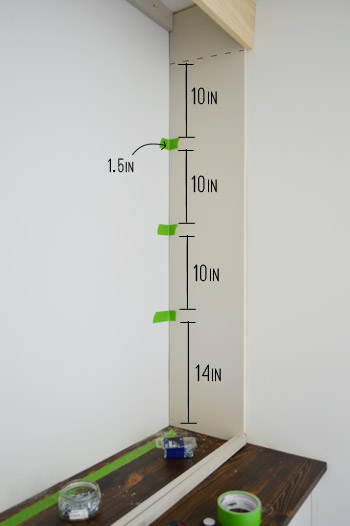 Next it was time to attach the shelf braces. I cut these brace pieces by ripping a 1 x 3″ along my table saw into .75″ wide pieces. This will make more sense in a moment, but basically any thicker than that and the braces would hang below the trim pieces that I’d be adding later to the front of each shelf. 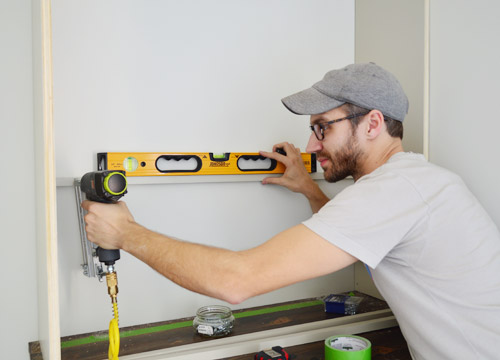 I nailed the braces into the wall and the sides (being sure to keep things level as I went) just to get everything in place. Then to make sure they were secure and could bear weight, I went back and screwed them each into the studs in a few spots.

Here are all three shelves added (Sherry and I had already pre-cut and painted them). I also nailed each shelf down into the brace piece so they won’t pop out or jiggle or anything. 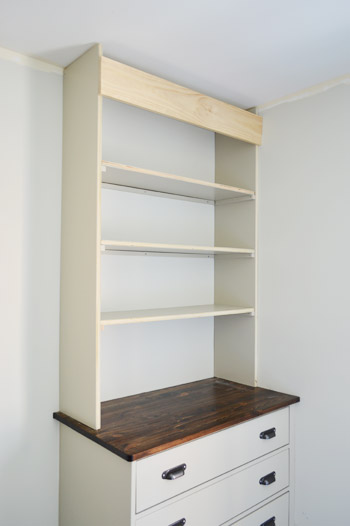 One of the continuous challenges of this build has been that our walls aren’t totally flat/level. So my perfectly cut shelf pieces didn’t necessarily sit perfectly flush in some spots. But it wasn’t anything a little paintable caulk couldn’t fix along those back edges – especially since I had to caulk all the various seams where the braces met the shelf anyway. 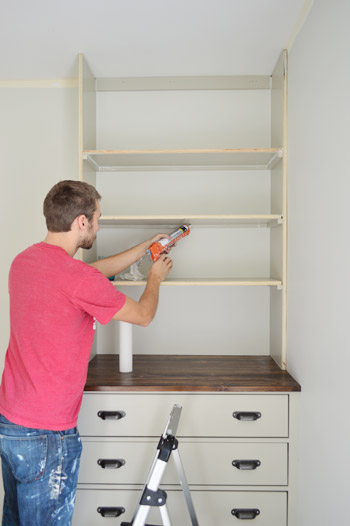 Once the caulk had dried, we took this opportunity to paint the back wall and ceiling to match the rest of the built-ins. We considered leaving the wall color as-is, but decided it’d look more like one unit if we painted that to match the shelves. We’re still open to adding a pop of color to the backs down the line, or even some foam core covered with fabric or wallpaper, but we want to load up the shelves to see how they look first (don’t want them to get too busy).

After our wall paint dried, I re-hung the temporary header piece that I had added before (I popped it off so Sherry could paint it). It doesn’t go all the way to the ceiling because the crown will cover that gap (and it was cheaper to buy a 1 x 6″ piece than a 1 x 8″ one). Next I attached the face trim. Since plywood has a rough and unfinished edge, we wanted to polish things off with some 1 x 2″ pieces to frame out the front and make them look chunky. Sherry likes to call this method “Restoration Hardware-ing” something, because it really is the difference between a budget look and a nice substantial and solid one. 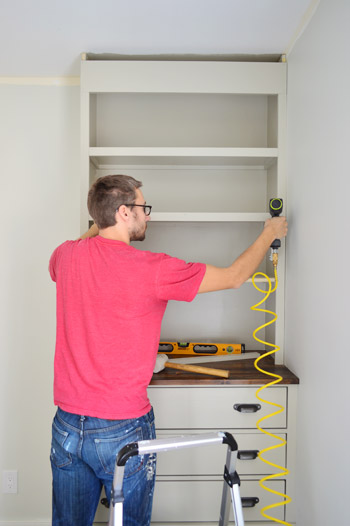 Then I could begin to install the crown molding. We’re using the same technique that we used in Clara’s room (upside down baseboard + crown = extra beefy crown). Since I intentionally bought the shorter/cheaper 3.25″ baseboard (knowing that it wouldn’t sit flush to the ceiling, but that the gap would be covered by the crown) you can see how I used a spacer on top of the piece that I’m nailing to make sure I got things in the right spot. 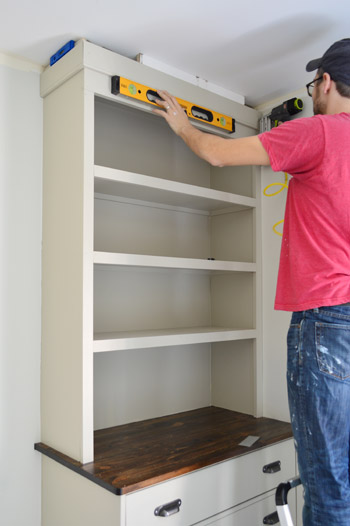 There were a few questions on Monday about white vs. gray molding and whether it should match the built-ins or the rest of the room. We’ve seen it done both ways, but here’s a room where it matches the built-ins, which we liked more. We may change our minds once we see all the trim installed, but we just pictured a white stripe at the top and bottom of them looking funny – kind of like the middles are floating. So we like the idea of grounding them with same-toned baseboards and elongating them by continuing that color on the crown.

Here’s a piece of freshly painted crown just held in place so you can get the idea of what it’ll look like. I’m going to wait to install these pieces ’til I do the whole room, which will hopefully be early next week. 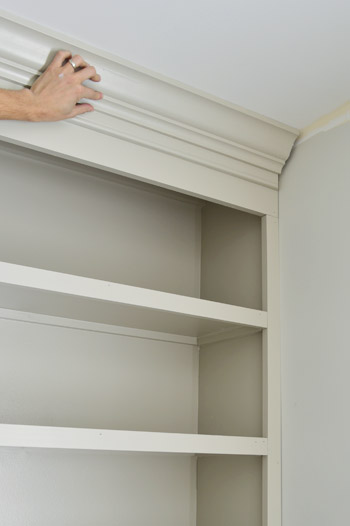 We still need to do some caulking, nail hole filling, and paint touch-ups. But for the purposes of today, we’re declaring them done enough. At least enough for us to start putting the room back together.

Oh and a few folks on Monday wondered if these built-ins were storage overkill, at least for a baby, but they’re just our way of playing the long game in here. Clara’s six-drawer dresser was barely full when she was born, but in a few short years she has grown, along with her clothes, and now that big double dresser is overflowing. So we think these eight drawers will be full in no time. 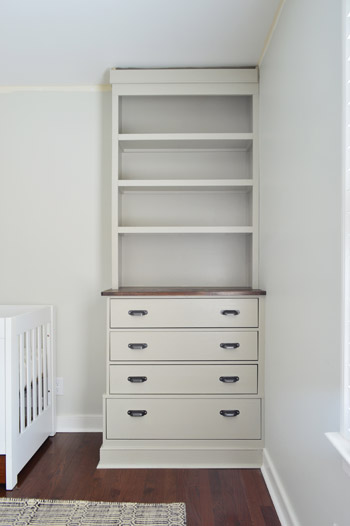 It would probably make for more blog fodder if we redid everything when he’s 3, but we’re trying to invest time and money into more permanent-but-flexible pieces for this guy, especially since we plan to be here long-term. That’s why we constructed these to eventually accommodate a twin sized bed (lengthwise) or even a full-sized bed (width-wise) when that time comes. So while we love easy & inexpensive Phase 1 updates for rooms that are extra pricey to renovate (like kitchens/bathrooms, especially when we’re not sure what we want to do with their layouts just yet), if we know what we want and have the money on hand for a space like a bedroom (or our recently renovated sunroom), it’s exciting to work towards that end-vision from the get-go.

As for the placement of the crib between these new built-ins, there’s about 15″ of wiggle room on each side, so we’re not concerned about Barnacle being able to reach out and scale the bookcases (we’ll drop the mattress when he’s more mobile, so they’ll be even further out of reach). And if he turns out to be especially long-armed or daredevil-ish, we can always rotate the crib 90° so the gap is even greater. 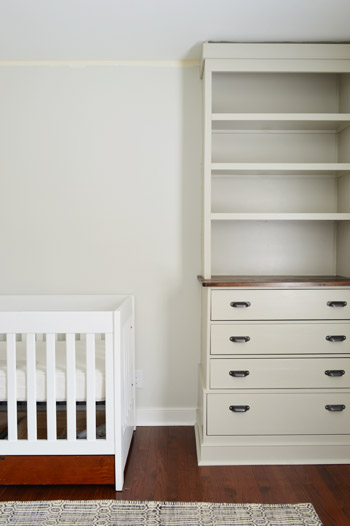 And now for some random room thoughts from Sherry, after we pushed the crib back in there:

The room’s definitely looking like Beige City right now (not to be confused with Bear City) but we have big plans to layer in lots more as we go – just like we did in Clara’s room, which started with white walls. So stuff like bedding, a mobile, window treatments, books, toys, and some colorful art should definitely add more personality.

As for the total cost of these two built-in bookcases, I spent around $60 per side (which includes the eco plywood for the sides and shelves, the baseboard and quarter-round that I used at the foot of the dressers, the lumber for lifting the dressers up to accommodate those baseboards, and the wood for the shelf braces & face trim).

In summary: I’m beyond psyched to have these checked off of our to-do list. When we first started discussing them I pictured them taking me months to finish, so I’m pleasantly surprised to have them knocked out in about two weeks. All of that priming, painting, staining, sealing, and caulking (shout out to the lady-wife for her help with that) really cuts into your pace sometimes! Speaking of Sherry, I know that she’s happy to have them done so she can unleash her decorating beast in here. Just picture her doing her best Golum impression and creepily whispering things like “criiiiib skiiiiirt” and “boooookcase stufffff.”

So Fresh & So Clean, Clean
Making Our Family Yearbook (An Annual Photo Book)