Every year we like to celebrate our “I Do”s by doing stuff, like recreating our wedding menu, taking a day trip near our engagement spot, cooking up one of our favorite honeymoon meals or even taking a big ol’ trip to Hawaii. This year was no different as we continued some of our anniversary traditions (like our annual picture, which a bunch of you asked about) and we threw in a couple of new celebrations too, like showing our wedding video to Clara for the first time. 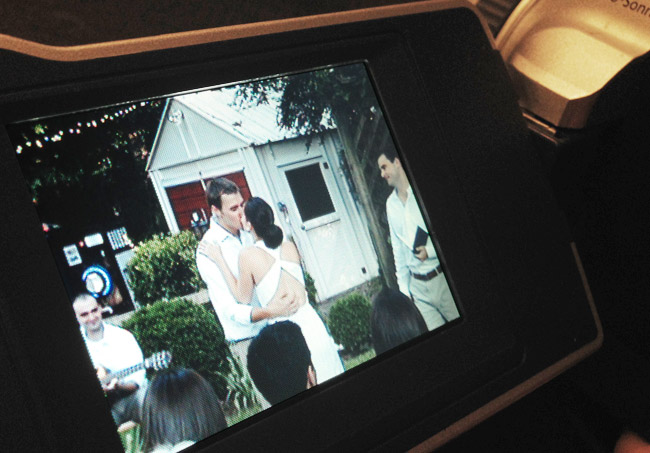 It was kind of comical because we realized we had no other way to watch it than on the miniscule screen of John’s old camcorder, so we were all huddled around it and pressed play. We probably hadn’t seen it ourselves for the past five years, so there were a few moments we completely forgot about that had us cracking up. Clara seemed to like seeing some of her cousins as kids instead of teens, and really loved Burger’s cameo, so it was a nice little (pun intended) trip down memory lane. 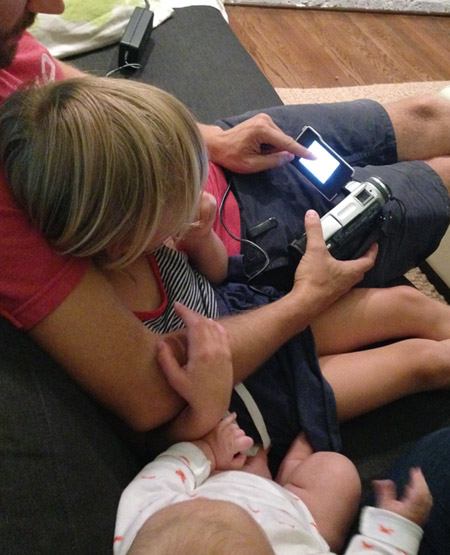 One thing we always talk about from our wedding planning days is how we never got to do that fun cake-tasting thing. While we love the sweet Ukrop’s cupcakes that we had for our backyard shindig, sitting down at a table and sampling a bunch of cake flavors and icings and fillers kind of sounds like the best part of planning a wedding. So we always laugh about how two dessert loving fools like ourselves missed out on that.

And then John went and did one of the most romantic things he has ever done. He surprised me by coordinating a better-late-than-never cake tasting with an amazing local baker who was happy to have one for us for a little more than she usually charges (since we weren’t actually ordering a cake in the end). 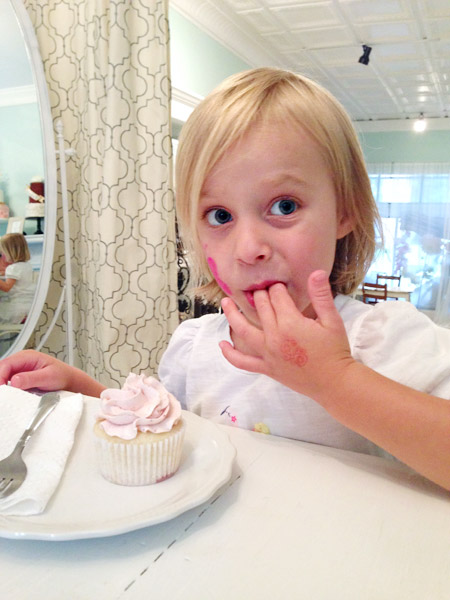 John debated selecting the flavors himself so he could surprise me at the tasting, but thought it would be more fun to pore over the options together beforehand, like we would have for our wedding. So he told me about it on our actual anniversary and then we got to make our flavor picks and taste them at the end of last week (once Amanda at Sweet Fix had whipped them up).

She bakes cupcakes instead of cakes as a way for people to sample the flavors, so it was pretty perfect. Sort of like smashing our original wedding cupcakes and the experience of a cake tasting together. Picking flavors was no easy task (OH, THE OPTIONS!) but we ultimately landed on: chocolate with peanut butter buttercream, princess white with green tea buttercream (princess white is like angel-food cake, this one was John’s favorite), almond with maple buttercream (my favorite – it tasted like a gourmet waffle) and vanilla with strawberry jam filling and strawberry buttercream (Clara’s favorite). 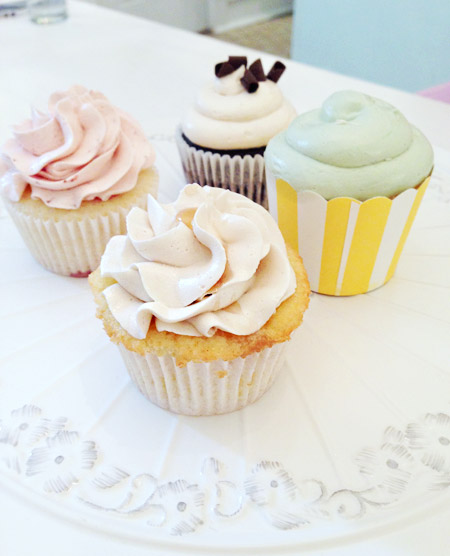 We each got to taste all of the flavors, plus take home a box of extras to enjoy and share with friends. We also took home this less than stellar family picture, thanks to Lady Blurs-a-lot. Don’t mind Teddy, he was just checking out the sample cakes. 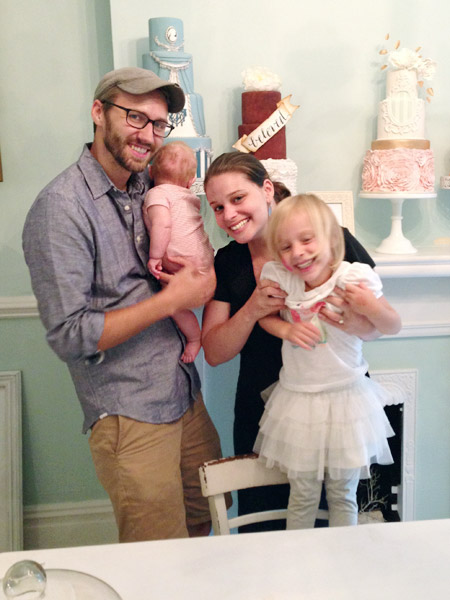 Speaking of not-so-perfect family pictures… as some of you remembered, we try to get a family photo along with a photostrip each year on our actual anniversary, so last Monday we made the obligatory trip to the New York Deli (a restaurant here that has an old timey photobooth in the back) with pretty laughable results. One of the funniest things about this booth is that the prints tend to vary wildly. One year they’re super clear, sometimes they’re dark and spotty, and this year we ended up resembling a family of ghosts. 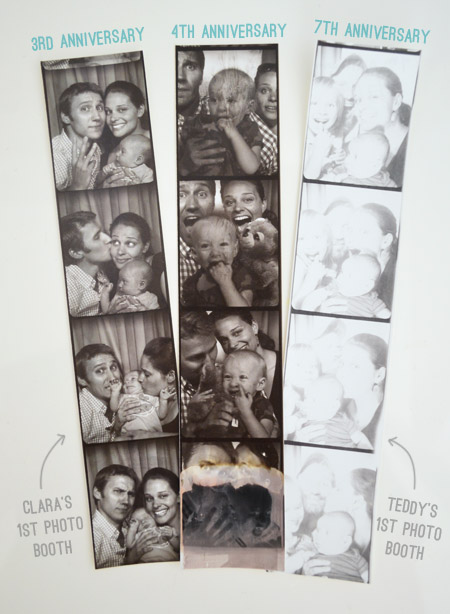 It’s kind of a bummer, but the sign on the machine gives you fair warning… 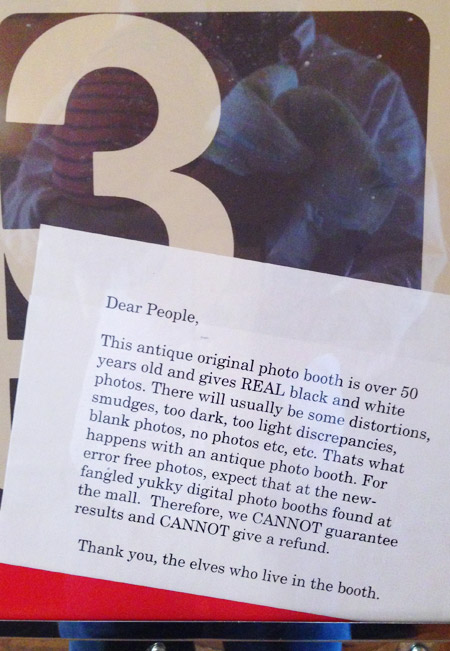 Gotta love those elves who live in the booth. And as a side note, if any locals know of other real photobooths in RVA, we’d love to hear about them. 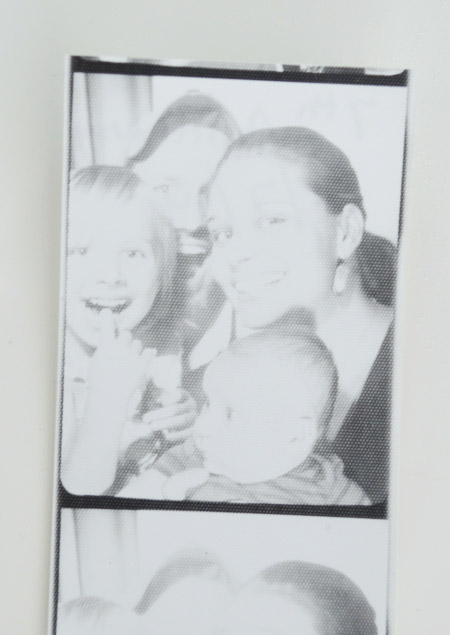 We did manage to get one decent family picture on the 7th, thanks to our tripod and the camera remote. We attempted some with Burger but he was all “Um, I’ll sit this one out, weirdos.” (our sweet mild-mannered dog wigs out every year that we try to squeeze him into the picture, so I guess that’s an anniversary tradition too). Teddy’s still working on the whole “smile at camera” thing, but Clara’s not blurry so that’s a victory (and she even managed to work her 4th of July tattoo into the mix). Come to think of it, maybe Teddy’s just checking out her tatt. 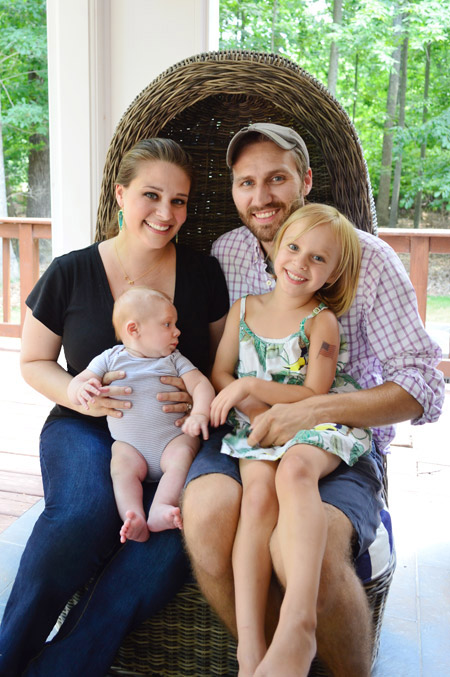 In our last house we had all of our anniversary pictures framed together by the bathroom mirror (remember this?), so this latest picture was the kick in the pants that we finally needed to hang them up here. We used a sliver of wall space in the sink nook off of our bedroom, which is nice because it’s something we walk by at the beginning and the end of every day. They start with our first anniversary in the circle frame and go chronologically from top-to-bottom in each column. I didn’t even realize how much I missed seeing those annual photos until we had them back up on the wall. 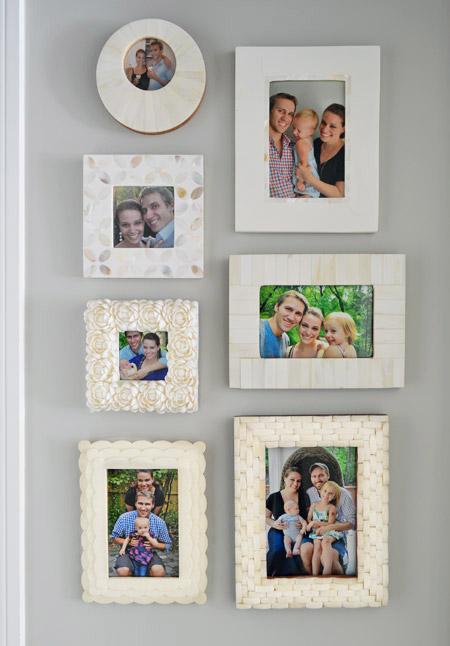 And last but not least, those who follow us on Instagram saw that we tried to cap off our anniversary with a little romantic dinner (at a place called Wild Ginger). Clara went with Grammy & Tom Tom to her cousin’s swim meet and we brought Teddy with us because “he’ll just sleep.” Well, sleeping didn’t happen at all, but he was a pretty adorable third wheel.

So there you have it. Seven years of being married to my cake-tasting partner in crime, and seven years of sharing what we did for each anniversary on this here blog. What kind of wedding traditions do you guys have? Day trips? Dinners? Dessert binges?

Fab Freebie: So Flexible
Wallflowers (aka: How To Cover A Wall With Fabric)