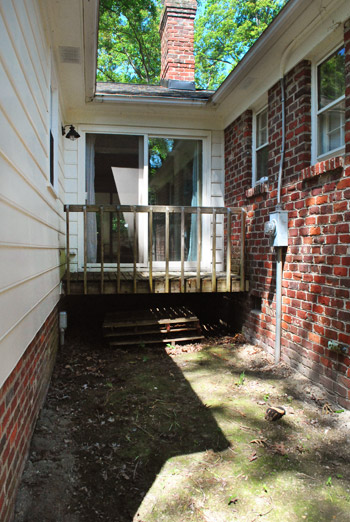 We attacked this assignment very methodically. I laid out a bunch of tools (crowbar, sledgehammer, power drill). I lugged over my ladder (for easy climbing up and over the side). I had music playing (see the ceramic pig on the windowsill?). I had Sherry on standby (she was inside watching Clara but ready to lend a hand/take pics at a moments notice). You know, the works. I figured it’d be a very careful process of prying off boards and observing how this previous structure was created, so that I might learn something for my new deck.

Well, methodical quickly went out the window and my demo “technique” rapidly turned into this: 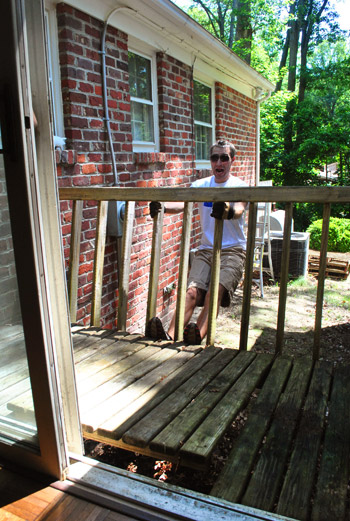 The “this” is better explained by watching this video. Basically I discovered that with some simple tugs the whole thing flapped apart.

So I pretty much just pulled and pushed back and forth on the railing until the whole outside edge of the balcony started to twist off from the two ledger boards affixed to either side of the house (so it wasn’t scratching the house, just grinding against those ledger boards flanking each side that I’d also be removing). 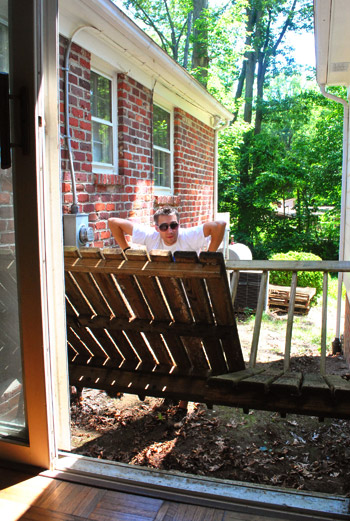 Before long, the entire thing had flipped over and completely pulled off the house. What you see below is the underside of the balcony floor (the top of the railing has twisted over to be on the ground). 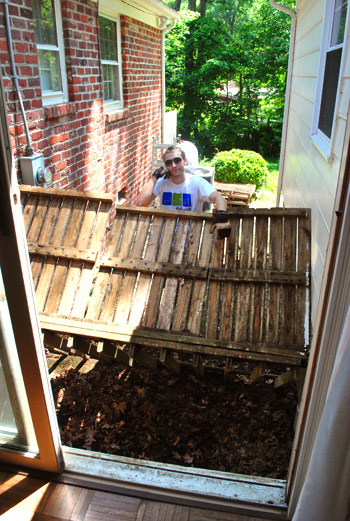 Once the bulk of the structure was out of the way (which took all of 15 minutes – no tools required), my task turned to removing the various boards that had attached it to the house. 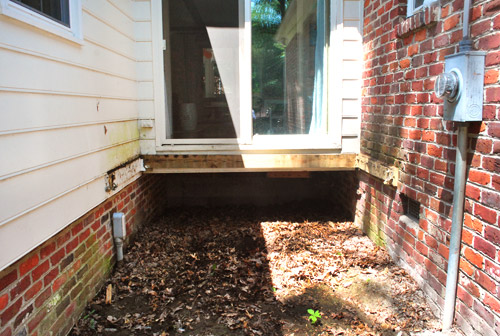 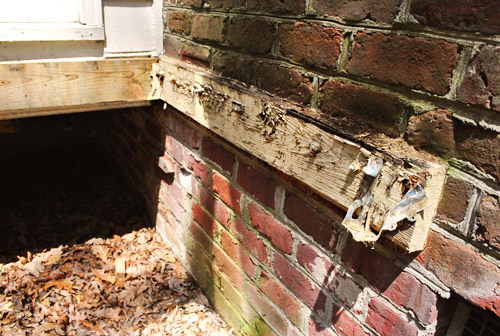 …and this other one that seemed to be just nailed into the siding. From what I’ve been reading, this isn’t recommended. For one, you’re apparently supposed to remove any siding that’s in the way so you can attach the ledger boards directly to the home’s rim board. If I’m losing you on any of these terms, this is a helpful chart that has helped me keep things straight. 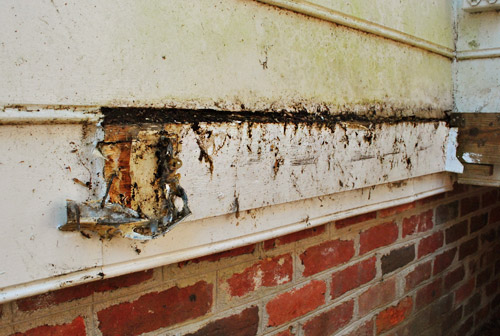 The other thing that I’ll do differently is install some metal flashing to help keep water from rotting away at the house. This previous installation didn’t have that, so the board and the piece of wood siding were both pretty rotted. But I was able to clear both away… 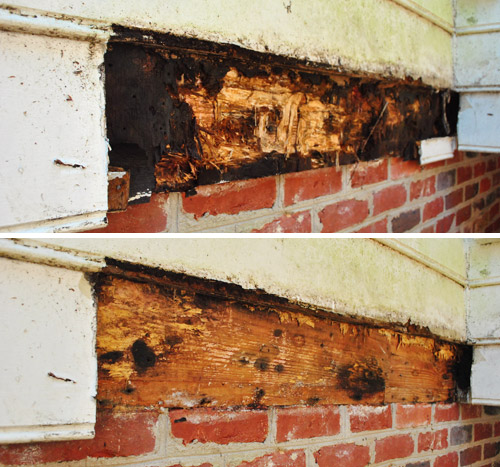 … to expose the rim board of the house.

Thankfully the new deck will run where that entire bottom strip of wood siding lives (the part that’s good and not rotted to the left of the part above), so it will be coming out. Which means I can reuse it for some of the rotten part above the missing siding strip that you see here. In other words, we’ll be reusing good wood siding that needs to come out anyway. And we’ll be adding metal flashing this time- so none of that nasty rot will plague us again.

Oh, and here’s the progress shot that we shared on Thursday. 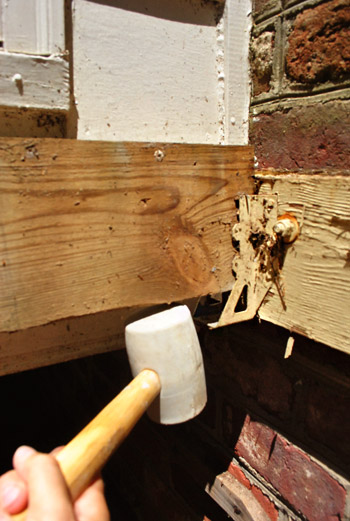 This is me tapping the joist loose that sat closest to the house (the other joist came down with the railing). It just sat in the metal hangar, so all it took was a light nudge with the rubber mallet to get it out. No giant sledgehammer required (darn).

In order to remove the ledger board from the house, I broke out my wrench to loosen the hex nuts that kept it screwed tightly into the brick. You can see here that flashing wasn’t used and that this board too has seen better days. 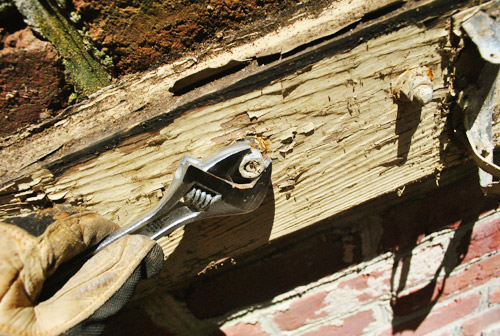 Once I got it removed, you can see the bolts that are still set in the brick. I’m leaving those in for now. If I can’t reuse them, at least maybe I can get some tips for my new bolts by removing them once all of my materials have arrived. 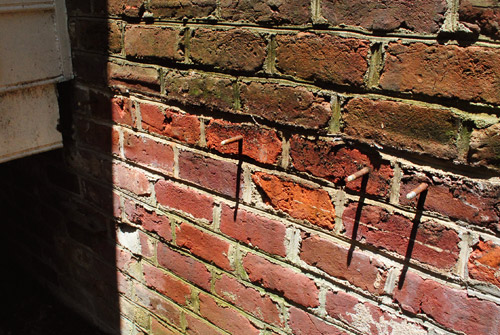 But anyways, by this point the whole balcony was officially gone. Well, actually it’s officially sitting in a trash pile behind where I stood to take this picture. But we’re not thinking about that yet. Let’s just focus on the progress for now. That and our sliding door to nowhere. 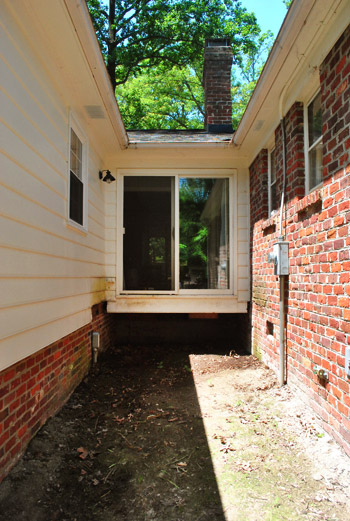 I’m a bit anxious / excited to actually start construction. Materials should all be here within the next few days and I’ve got my dad scheduled to come help us get started later in the week. He built the deck on the house that I grew up in, so we thought it’d be helpful to have him around. Hope he doesn’t mind that we demoed without him! So by this time next week we should at least have enough going on back there to report back to you guys. We wish we could say we’ll be back with finished deck pics in three days – but HGTV, we’re not. Haha. We’ll definitely be tackling this project in stages – probably over the next few weeks. But you know we’ll keep you posted! And hopefully by sharing each stage of the process with pics and details it might help other folks out there who are planning to dive into deck-building someday.

Has anyone else demolished something lately? Or do you have a great demolition story? Were you ever surprised by how something was constructed – like a deck floor that flips up when you tug on the railing or rotten wood due to missing flashing?