You guys often ask about our must have tools for DIY projects, and the truth is that it still catches me off guard that I’m The Guy People Ask About Tools. Growing up I remember taking trips to Hechinger (anyone remember those?) thinking “who would ever willingly go to a home improvement store?!?” And when my dad gifted me a set of screwdrivers in high school I wondered what the heck I’d use them for. But here I am today – 32 and the proud owner of more tools than I can count (and still fewer than I’d like) – including some of those same screwdrivers from my dad so many years ago. 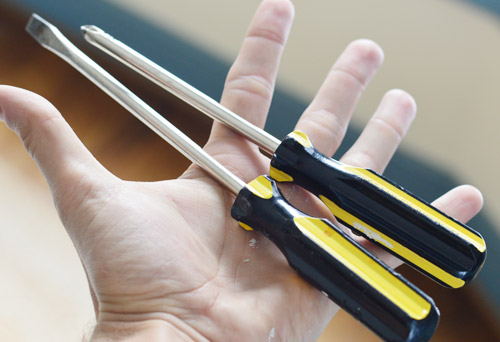 Home ownership is what flipped the switch for me. I quickly witnessed how the right tools could make a project go smoother, faster , or just plain better overall. But even still, I’ve been a slow adopter tool-wise. Well, mostly power-tool-wise. Tim Taylor’s mantra was more power *grunt grunt grunt* but mine is probably closer to sufficient power *pretty please*. I still have a healthy fear of tools that could shock me, slice me open, blow me to bits, or poke me full of holes, so in many cases I play it safe and opt for more elbow grease. But my confidence with and reliance on power tools has grown bit by bit over recent years as I’ve tried new ones and realized I can use them successfully… and without maiming myself! And Sherry’s right there next to me grinning and firing them up.

In fact, certain must have power tools have been game changers for us. Some were particularly confidence boosting. Some were the gateway drug (or saw). And most are now things that we can’t do without. So without further ado, I present to you: 5 Power Tools That Changed How We DIY. 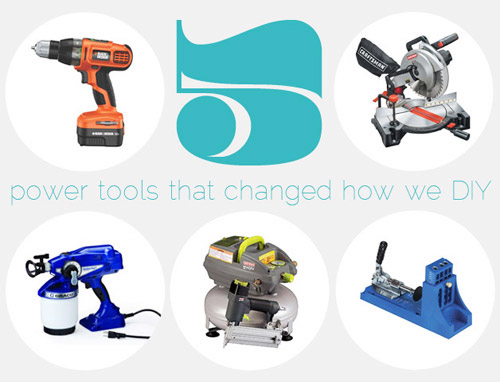 #1 – Power drill / driver – I’ll start slow here, because a $40 cordless drill barely registers on the power tool spectrum. But my little 12v battery-operated drill/driver that I bought nearly a decade ago is still one of my best tool purchases. Just putting a little power behind the otherwise tedious task of screwing things together or drilling simple holes (like for picture hanging anchors) has made small DIY tasks much easier and faster. Seriously, just buy yourself a hex screwdriver bit set and see how much faster your next Ikea assembly goes. The 12V Black & Decker model we used to use is no longer available, and we’re currently using this 18V Ryobi ONE+ version because its battery matches some of our other cordless tools. 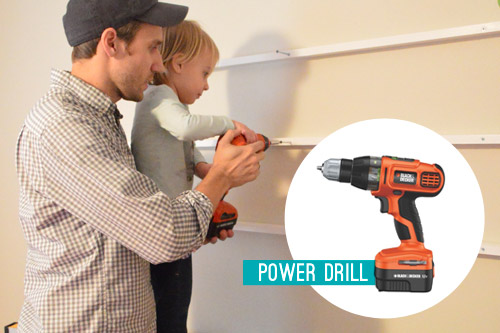 #2 – Miter saw – Power saws were the most intimidating power tool to me. I mean, c’mon, there’s a whole gory movie franchise bearing their name. But borrowing my dad’s miter saw to install trim in our first bathroom remodel was eye-opening to me. Just making simple 45° cuts turned out to be super easy, fast, and even kinda fun. I got that little rush that you get when you conquer a fear and it triggered a complete 180° in me. I love saws. I own six of them (not counting the manual ones). And becoming confident with them has opened up a whole world of projects we can tackle – whether it’s cutting big sheets of plywood with a circular saw or ripping floorboards on our table saw. Here’s the exact miter saw that we have. 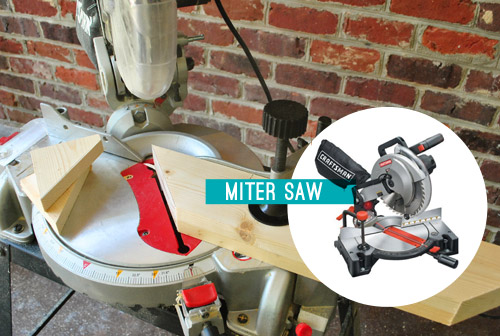 #3 – Kreg jig – Now this one isn’t technically a power tool (although it does involve using a power drill/driver), but it was too significant in my “tool journey” to leave off the list. This was the device that got me interested in building stuff. It took some of the mystery out of joining two pieces of wood together (not that there’s a whole lot of mystery there to begin with). I started small with some shelves for Clara’s nursery and before long we were using it to constructing giant console tables, play kitchens and even real kitchen cabinets (okay, all of those should probably be singular). Although I’ll admit ol’ Kreg and I don’t spend as much time together as we used to thanks to the next item on my list. Here’s the Kreg Jig that we have. 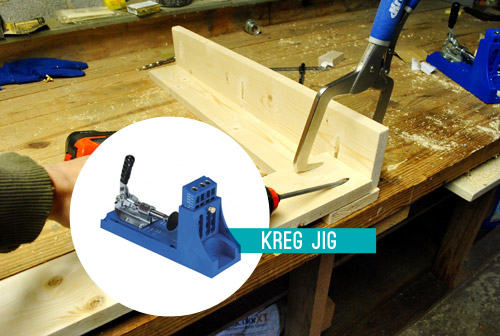 #4 – Nail gun – After “saw”, “gun” is the scariest word in the tool dictionary to me. I was a slow adapter in purchasing a nail gun (we bought ours less than a year ago) and our model is far from heavy duty. But after hours of numb arms thanks to manually hand-nailing some crown molding in our last kitchen, I knew we had to up our game if we wanted projects like adding board and batten to take days instead of weeks to complete. And just like with the miter saw, within one use we were both full converts. Not only has it made projects like adding crown molding and installing our sunroom ceiling possible, but for the most part it (plus wood glue) has replaced a lot of tasks we had previously used the Kreg Jig for (mainly for speed reasons, since glue + nails is much faster than drilling pilot holes and screwing things together – although that’s still the best way to go for certain tasks). Our nail gun is no longer sold, so this is what we use these days instead (it doesn’t require an air compressor either!) 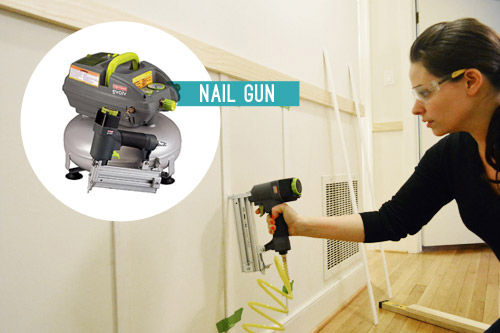 #5 – Paint sprayer – This is the latest power tool to join the Petersik ranks (it’s even newer than the nail gun) and it almost didn’t make the list. Just like numbers one through four, it has been invaluable for speeding up tasks that otherwise would’ve taken us days – namely spraying all of the blue/cream/mauve trim & doors on our house’s second floor before moving in. But it wasn’t a shoe-in for this list because I still have a love/hate relationship with it. While I love its painting speed, there’s a lot that I don’t love – from prepping and protecting against over-spray, to the time it takes to clean it after use – which means using it isn’t a no-brainer for us every time. I’m still glad we have it, and we definitely like to use it strategically (like for painting the kitchen cabinet doors that we could remove and spray in the garage while hand-painting the frames that were still in the kitchen to avoid an over-spray snowstorm), but it hasn’t caused us to ditch our old school brush and roller completely. We’ve since fallen out of love with our old Graeco model, so here’s the one we’ve been using more recently. 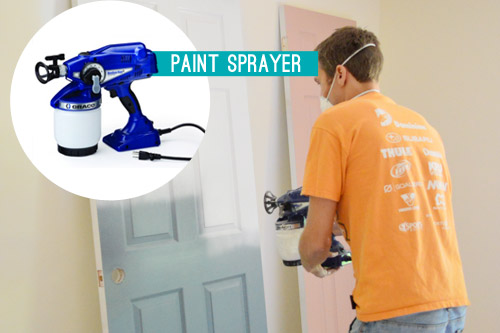 So those are our 5 must have tools for DIY projects. What are yours? Are there any others you think I should add to our repertoire?