In the words of Carla from Top Chef: hootie hoo! Our counters are ordered (more on what we chose and why we chose it here). They came in at exactly $38 a square foot from Home Depot (no hidden/added charges, which was nice) which added up to around $1700 (ouch, good thing we’ve been saving for this kitchen a while). We also priced them out at Lowe’s and a couple of local retailers and none of the local retailers could do better than $55 a square foot (huge difference, huh?) and while Lowe’s and Home Depot both had the same $38/square foot price, Lowe’s charged more for the sink cutout and a few other add ons that HD didn’t. The deal was sealed when Home Depot agreed to match a 10% off Lowe’s project coupon that we got in the mail AND the 5% off that we’d get if we used our Lowe’s card (our local Lowe’s stacks those discounts although we’ve heard some others around the country might not). So we’re happy to have saved a good chunk of money shopping around and price matching coupons.

Another way that we’re saving money is by reusing our existing sink: 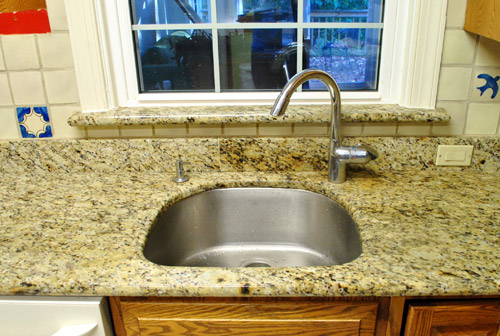 We really like our sink, and obviously wanted to save a couple hundred bucks or so by not buying a new one (as we mentioned here, we’ve heard many times that seamless Corian sinks can be a lot harder to care for than Corian counters – so most folks prefer stainless undermount). But we learned both from Lowe’s and HD that for the Corian fabricator to accurately plan for our sink… they’d need to take it with them when they came to template for the new counters (aka make precise measurements to design the countertop). And that meant removing the rest of our granite to free up the sink. 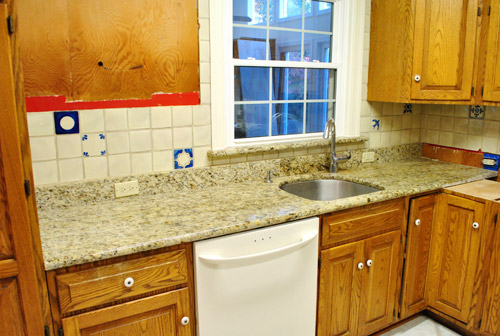 The process started by disconnecting the disposal and the plumbing underneath the sink. Don’t interpret only having one photo of this process to mean it was quick. It should’ve been (according to all of the how-to‘s I googled and watched beforehand) but the mounting ring on mine was jammed and it took me about 45 minutes to finally get it free and spin it off. On the bright side, I am now very familiar with my garbage disposal. Maybe that should have been on my Things To Accomplish Before I’m 30 goal sheet (get that reference here). 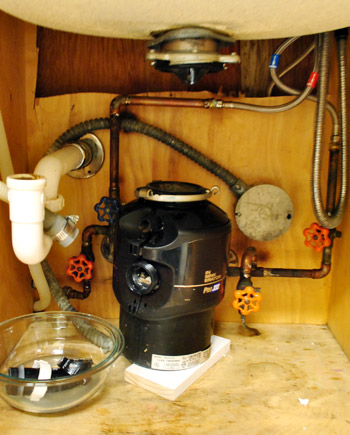 Next I wanted to remove our faucet, which we also plan to reuse (at least in the short term – later upgrading to another one-hole faucet won’t be a big deal). Fortunately this went faster, thanks to digging up the installation manual online and reversing the steps. 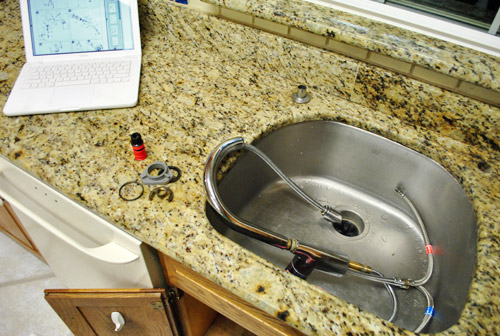 With all of the fixtures detached, it was granite removal time. Having already done this once in our kitchen (we removed the first half of the granite to make room for the stove), we knew the process wouldn’t be too hard. It’d just require some muscle. So we warmed up by prying off the backsplash with a crowbar. 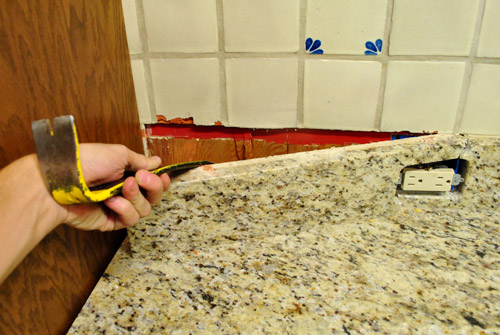 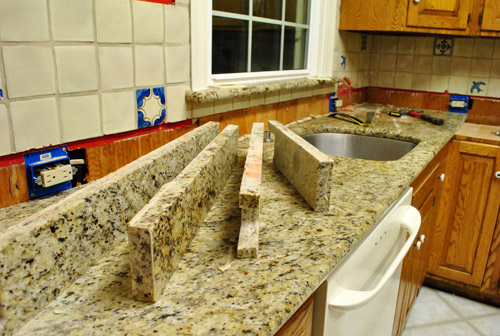 Then we made a couple of slices along the glue that held the counter to the cabinets and got to prying. It lifted up remarkably easily. 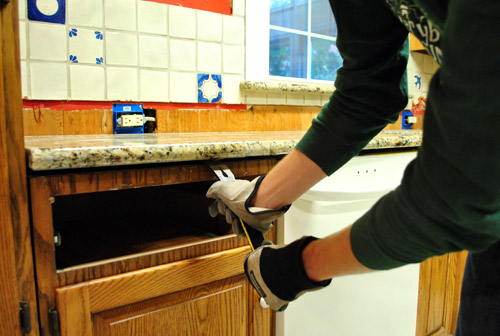 Then came the muscle-y part. Which is why we recruited my parents to help again (mom to watch Clara and take pics, dad to lift). But it quickly became apparent that this slightly larger slab of granite was more than slightly beyond our lifting abilities – especially since we would’ve had to lift it up high enough to get the sink out without damaging it (if the granite slammed down on the sink while it was halfway over the cabinets it would have meant $200+ to buy a new one and potential cabinet damage as well). 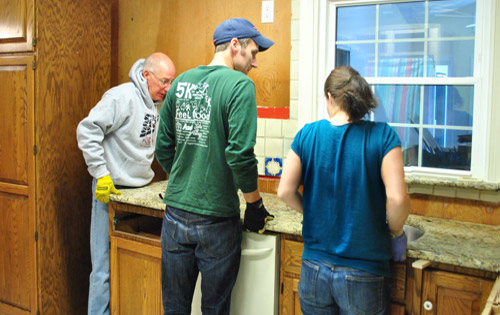 We had been trying to get it out with the sink attached because the folks at both Lowe’s and Home Depot thought we’d be able to better cut the sink free without warping or tweaking it that way (therefore saving us the loot to buy a new one). But that method wasn’t going to work here. That long slab of granite was way too heavy. As in, we probably couldn’t have lifted it with two more burly men present. So we regrouped and came up with the idea to try to remove the sink first, by freeing it from the glue that held it to the granite.

We began by gently sliding a spackle knife into the space where the sink was undermount-glued to the counter. Once Sherry (she’s the boss of the group) broke the seal in one spot, we were able to tap it around the perimeter with the help of a hammer. I say “we” but my dad ended up doing most of this for some reason – although Sherry did the first edge of four. Not sure how I got out of it but… thanks Dad! 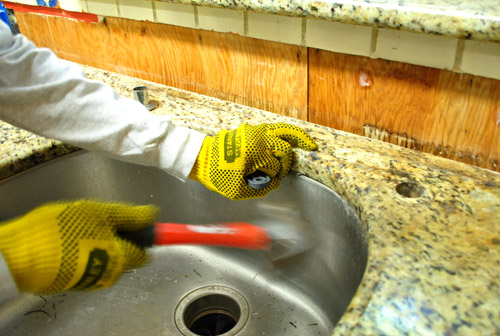 Eventually all of the glue was gone (this took about 45 minutes) and we were able to tilt and raise the granite up just enough to lift the sink out from under it (we kind of hinged the granite back like the top of a trunk or chest so we weren’t supporting all of the weight ourselves). The best part? The sink was unharmed… just a little dirty. So we get to save 200 beans and reuse it! Oh happy day. And you can see just how big our sink is in this shot with the wife around for scale. Note: Sherry wants me to clarify that’s not dandruff or debris on her shoulders, it’s gold beading that apparently reads more clearly in person. Gotta love a gal who rips apart her kitchen in fancy beaded clothing. 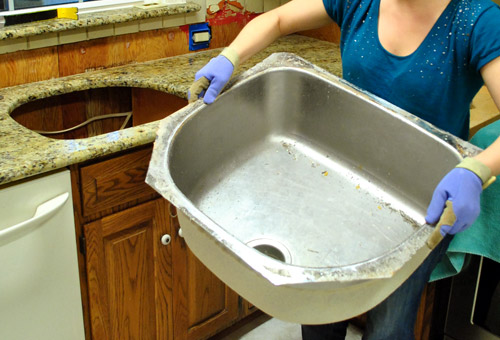 At this point I guess we could’ve left the granite in place, but we knew the installers either preferred no counters or all counters when doing their measurements (not half and half, since it could throw them off) – and we also wanted to use my dad. Wait, that sounds bad. But we could definitely use the extra strength, and he was standing right there in our kitchen, so…

With the sink safely set aside in the other room, we just lifted the granite up slightly on one end and this quickly showed up: 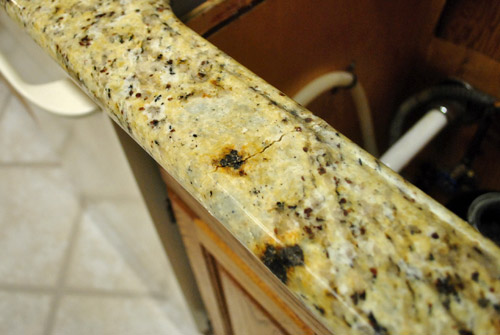 Never did I think I’d be so happy to see a crack in my granite. See, we knew that if it cracked in half around the sink (which is pretty hard to avoid anyway) we could lift each side of the slab separately. Which we definitely could handle because it was the same size as the granite piece that we removed when we added the stove a few weeks ago.

But we were less happy to find this beneath the crack – some sort of metal rod that must’ve been installed to keep the granite strong across the sink hole. Boo for unforeseen metal rod-like obstacles. 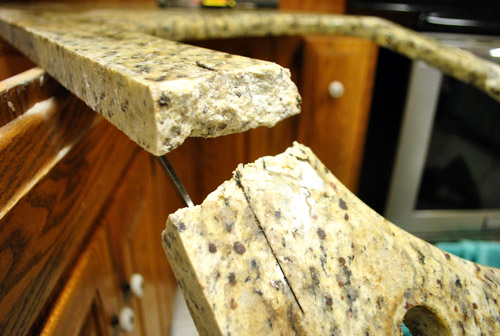 But after we slid half of the granite off onto the floor, the rod was bent enough that we could use a screwdriver to pry it loose and completely separate the now two halves of granite… which were each light enough to be carried out by just two of us. 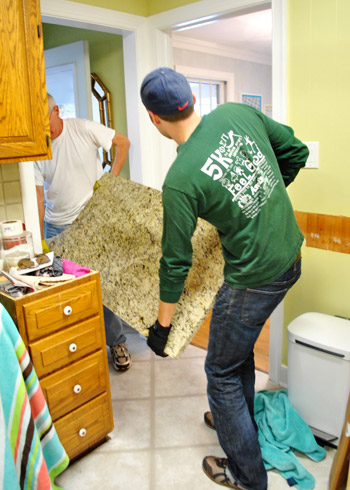 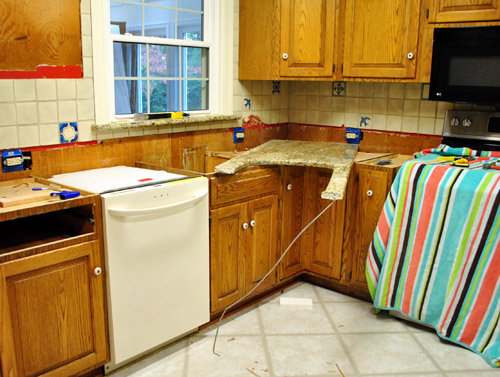 Now that all of the granite is removed and residing safely (and somewhat junk-ily) in the carport to be craigslisted, our kitchen is looking something like this. Yup, it’s safe to say we’re 100% sinkless. 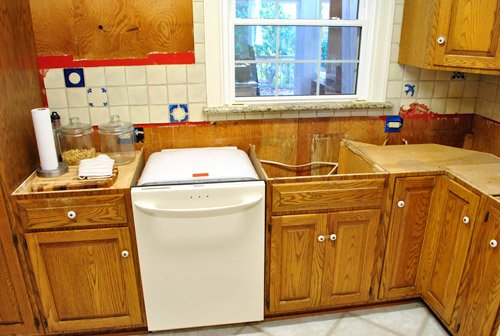 According to the counter fabricator, we’ll be sinkless for about three weeks (maybe four, considering Thanksgiving is thrown in the mix). But I did reconnect the drain on the dishwasher so at least we can still use that (and therefore maintain a smidge of civilized living around here). I try to remember that while I rinse non-dishwasher-safe pots in the bathroom sink. But we definitely have it better than we did in our first kitchen (which was a full gut job – so we didn’t have a stove, fridge, microwave, and dishwasher to use at all for months).

Has anyone else foolishly believed they could lift an eight and a half foot hunk o’ granite with two other people? Have you ever seen rods around the sink while removing or installing granite? Have you kept/reused an existing sink? Did it take you a second to disconnect your garbage disposal like it’s supposed to? If so, consider me a jealous man.