The universe works in funny ways sometimes. Take a few weeks ago when we were lamenting the death of our lawn mower on Facebook and Twitter (though we later resuscitated it with some basic DIY maintenance). After we sounded the Twitter and Facebook alarm, not only did we get lots of suggestions from you guys, but our friends at Lowe’s noticed our online call for help. In fact, they – along with the kind folks at Fiskars – generously offered up one of their newest mowers: a Fiskars Momentum Reel Mower, which just happened to be one of the more frequent recommendations that we got via Twitter and Facebook. Coincidence? We thought not. So we gratefully took Lowe’s up on their generous offer. And they even agreed to extend the offer to one lucky reader- so stay tuned for that prize as part of our Lowe’s Fathers’ Day Freebie which we’ll be posting later today! 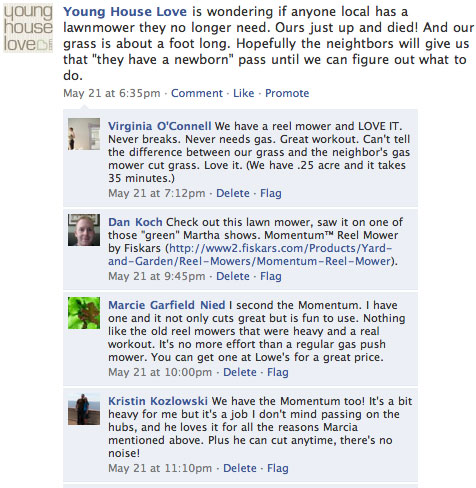 But back to the matter mower at hand. I’ll admit that I was a bit skeptical of a reel mower at first, since it seemed like such a low-tech, high-effort, and mixed-result way of mowing your lawn. Especially a pretty large front and back yard like ours. But all the online suggestions from helpful and enthusiastic readers (plus a bit of my own reasearch) proved to be very convincing. We soon realized that not only would a reel mower be a better option for the environment (no gas fumes) and for my wallet (no buying oil or gasoline – plus it’s only $199 itself at Lowe’s) but it also complies with my apparent aversion to mower maintenance (no more oil changes, filter changes, or spark plug replacements necessary). It’s even healthier for me (no fumes in my face, plus a bit of a workout thrown in there for good measure). Oh, and I loved how easily it fit into the back of our Altima for the ride home. Definite perk. 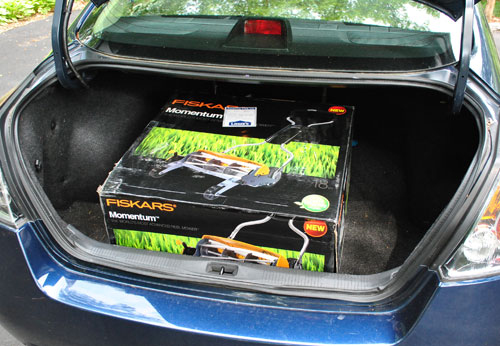 So here’s the play by play when it comes to my maiden voyage with our brandspankingnew Fiskars Momentum. Right off the bat I was immediately won over by how few parts it had and how easy it was to put together. This is what it looked like out of the box… 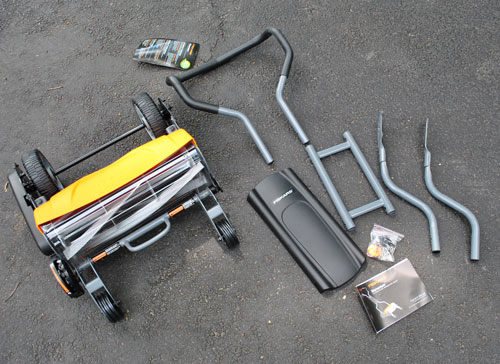 …and here’s what it looked like about 8 minutes, 4 screws and 2 cotter pins later. Ready to roll. 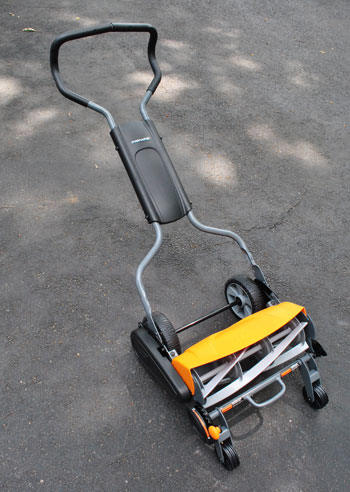 In case you’re still scratching your head at this thing, a reel mower is a human powered machine. You “walk briskly” with it (as the manual suggests) which spins the blades and cuts your grass. And this reel mower claims to have innovations that make it easier to push (bonus) but since I only have experience with self-propelled gas mowers I realistically knew that this guy was gonna be a bit more work than I was used to no matter what. But one of the other improvements that Fiskars talks about is that the blades never touch each other, meaning that they need to be sharpened far less often than the average reel mower (perhaps even never). Again, not a difference that I really have anything to compare it to, but it’s nice to know that it’s a top of the line contender in the category that’s both lower maintenance and easier to push. 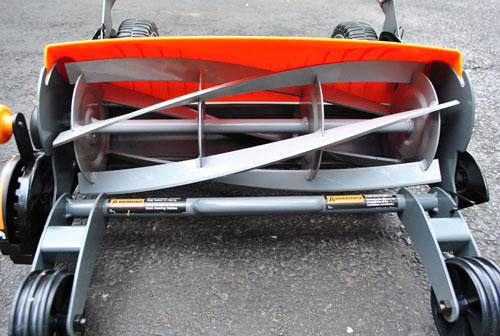 One difference that I was able to immediately pick up on and enjoy was the ease of setting the cutting height. My Troy-Bilt mower required that I adjust each of the four wheels separately and the levers were getting so old that it was quite the chore to move them. The Fiskars only required that I shift one lever to change the cutting height anywhere from 1″ to 4″ (anything over 3″ is said to be the greenest option for your lawn since it allows the blades to soak up more sun and water than closely cropped lawns do). And this easy height change capability is yet another listed improvement over other reel mowers, which can be notorious for cutting grass to short. 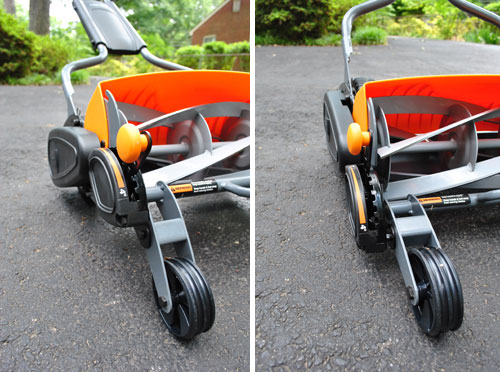 But enough about features. What was the whole mowing experience actually like?

Well, it was kinda fun. For one, it was virtually silent compared to the engine roar that I was used to, meaning I didn’t have to crank my iPod up to deafening volumes just to rock my way across our yard. Plus, the way the mower stealthily sprayed grass clippings out the front was not only mesmerizing to watch, but I loved the fact that it wasn’t kicking them back at my feet or off to the side (like the ol’ gas mower did – meaning I often sprayed the driveway and patio with messy looking cuttings). I tried to capture the front-spewing feature on film several times for you guys, but I had limited success. I guess flying blades of grass on a background of more grass isn’t the most high contrast subject matter. 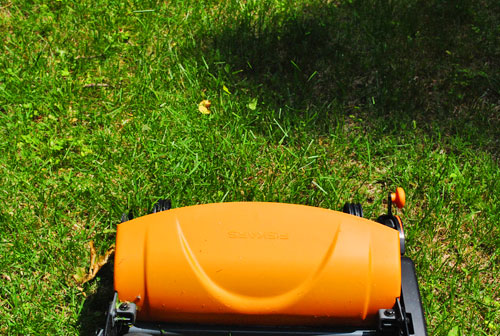 Here’s a close up so you can (hopefully) see those flying blades a bit better. And yes, I was totally mowing with one hand and snapping pictures with the other. I don’t even want to know what the neighbors were thinking. But that does go to show you that it’s not dauntingly heavy or super hard to push. 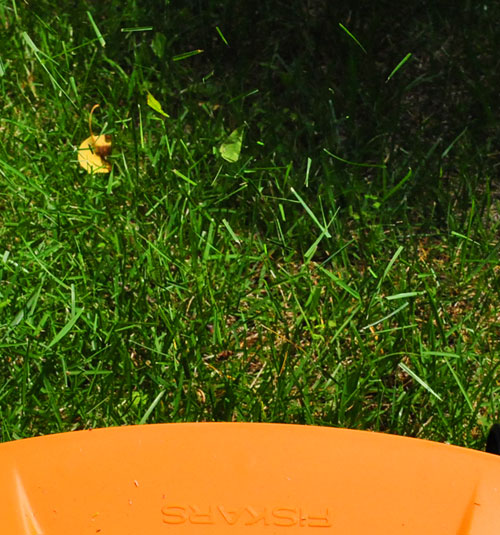 Actually, the neighbors were probably thinking: “Who is that weird kid trying to manually mow that big lawn with a reel mower?“

I can’t blame them. Between just the front and back yards (not including the wooded area out back) we have over a third of an acre of grass. And the neighbors on either side of us both use rider mowers, so you can probably guess what they thought of the sight of me and my new orange friend. Even Fiskars themselves admit that reel mowers aren’t typically a good fit for people with large yards, so off the bat I knew we weren’t prime candidates to fall in love with the Momentum. But the odd thing is that after mowing both the front and the back yard once, I found myself looking forward to the next trim session, which occurred just about a week later. And the second time was even more fun than the first since I knew what to expect and welcomed the fume free workout that it was sure to provide. 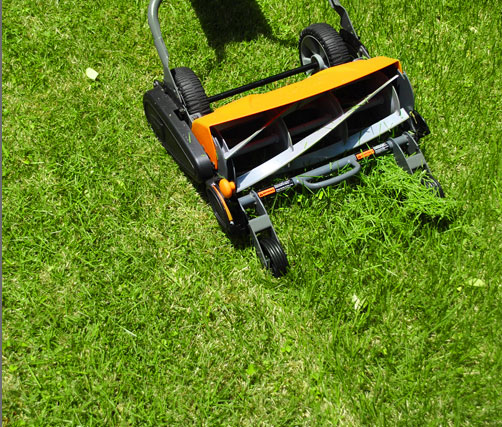 As for the overall experience with our new reel mower, I think the Momentum is great (especially in being a greener option), but I discovered a few things that made me realize that this mower isn’t for everyone (just as the fine Fiskars folks proclaim on their website). So in an attempt to share what I’ve learned and help people end up with a mower match made in heaven, here are a few points to consider when deciding if the Fiskars mower is just the ticket: 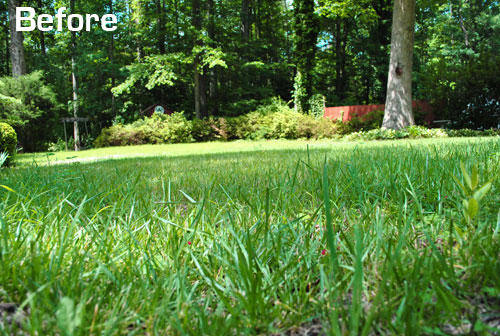 The verdict? I think moving forward I’ll probably go steady with our new Fiskars but occasionally date our old-but-revived gas mower. After all, we’re used to going a bit above and beyond to be greener, so I’ll put in the extra effort with the Fiskars whenever I can. But I do plan to rely on my gas-powered Troy Bilt on the rare occasions when I’m super short on time (and once or twice in the fall when I like to mulch leaves right into it). But if your yard doesn’t pose the same problems as ours (big and sometimes stick-riddled) then the Fiskars is probably a one-mower-fits-all option for you. After all, it still leaves a darn good looking lawn behind: 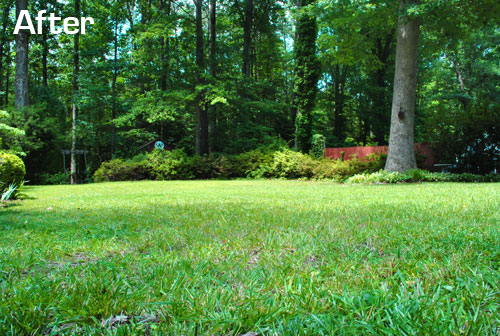 Do any other Fiskars Momentum (or other reel mower) owners want to weigh in on their experiences? Anyone else have a mower that makes their heart go pitter patter? Do tell. And don’t forget that you’ll have the chance to win a Fiskars Momentum for yourself as part of this afternoon’s giveaway from Lowe’s (along with another pretty sweet Dad’s Day prize) so stay tuned…