Young House Love » Home Improvement » Why Is My Roof Leaking? (How We Fixed Ours Ourselves)

Last week was shaping up to be pretty good week. Sherry celebrated turning 30. We declared the kitchen done(-ish). Spring was in such full bloom it was practically summer. In fact, we even got a pretty awesome thunderstorm one night. Seriously it rained buckets. Faster and harder than we had ever seen since moving into our new house. And then around midnight, it happened… 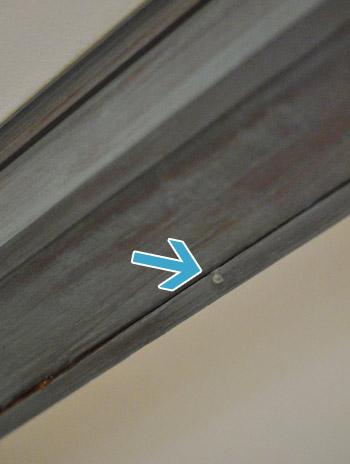 We were watching some TV when we heard a sudden, loud rushing sound. Like someone dumped a gallon of milk on the floor in the kitchen. Our first instinct was that the new-ish-ly installed dishwasher was leaking, so we both dashed towards the kitchen – only to stop in our tracks when a stream of water hit us from above before even entering the kitchen. It was coming from one of the beams in the living room. And then we noticed a pretty steady stream coming out of a nearby wall too. Crap. 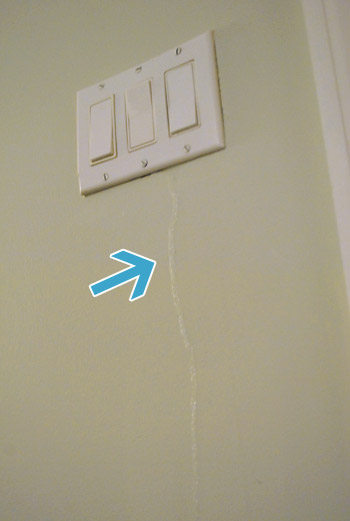 It all happened so fast. We scrambled to grab a bucket to catch the water streaming out of the beam and stuffed a big ol’ towel at the base of the wall that was dripping. Since it was still pouring outside (with a fair amount of thunder and lightning), our only plan of attack was to go into the attic to see what was up (since going outside with a big metal flashlight or ladder sounded like a really bad idea). So I crawled up into the attic with a flashlight and my iPhone (so I could document the damage for Sherry by snapping a picture) while Sherry stood in the living room and tapped on the beam so I could orient myself in the attic and follow the sound. Sure enough, I found a general area where water seemed to be seeping into the house. Did I say “crap” already? If so, here it is again. Crap. It was so bad that Sherry came up into the attic with me and we both just sort of crouched there staring at it. 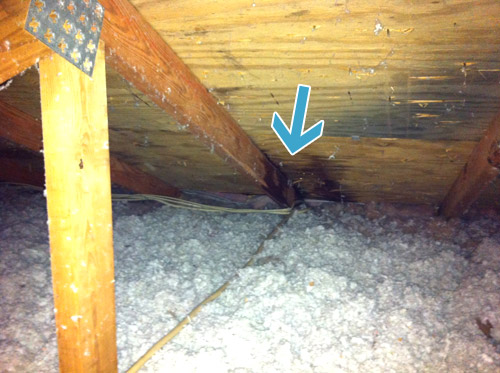 The area was too narrow for me or Sherry to get into (there’s no flooring in that area) and since things were starting to dry up outside (thank goodness!), we decided to call it a night. At this point it was around 1:30 in the morning, and we figured that in the am the roof would hopefully be dry enough for us to get up there and see what was going on (you know, without getting hit by lightning). The stream from the wall had stopped and we left a bucket out to catch anything else that decided to drip from the beam – but that had pretty much stopped too since the storm had finally passed. 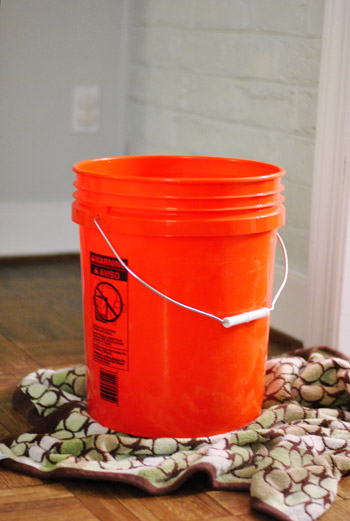 As if this weren’t bad enough on its own, it had now gotten too late to finish our DVR-ed episode of Dancing With The Stars. Tragic, we know. Watching Urkel strut his stuff would just have to wait. 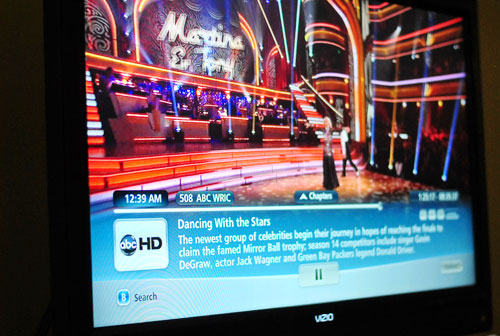 The next day was sunny and hot, so we figured the roof would have dried by the time Clara was down for her nap that afternoon, which was the first moment of the day that we both could tackle the roof thing together. First we headed back into the attic to see if the spot had dried up. Yup, it mostly had. 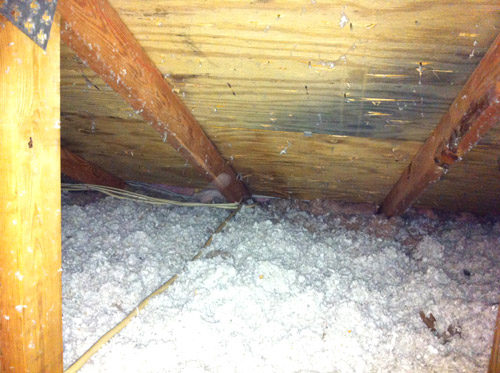 Next I went up on top of the house to try to identify whatever was causing our leak while Sherry “Afraid Of Heights” Petersik watched from the ladder. I sort of half hoped for / half feared finding a big gaping hole. At least then I would know what needed fixing. Oh and it bears mentioning that this roof (a 30-year asphalt shingle one) was installed the spring before the previous owners sold us this house, so it’s only a few years old. 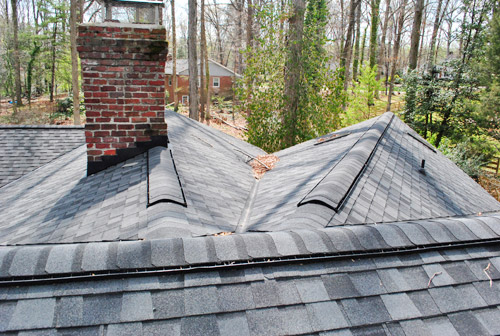 And yes, we do have quite the smorgasbord of rooflines. In case you’re totally disoriented, here’s roughly how this lines up with the floor plan below (note the chimney, which connects to our fireplace which is between the kitchen and living room – that’s usually what I use to orient myself). 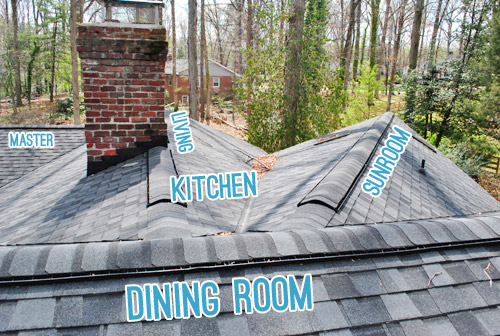 When I headed to the area above the leak, it was pretty obvious that I was looking at the culprit. Not a big hole, just a big ol’ pile of leaves. 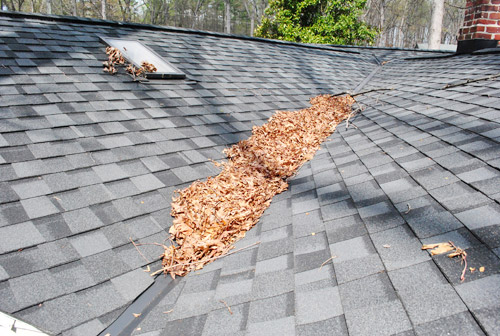 I try to keep the roof pretty clear of sticks and leaves, but I guess this pile had collected since I was last on the roof in the fall. And since it’s completely invisible from the ground, I had no clue this troublemaker was lurking up here. So after a few sweeps of the rake, the leaf collection was no more. 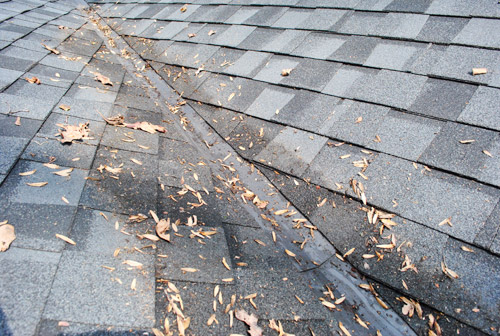 How does a pile of leaves cause a leak? It wasn’t so obvious to me at first, but having googled “find source of leaky roof” a bit the night before, I had a better idea. Shingles are overlapped in a way to allow rain to flow down over them. But when water flows up them, or rather builds up around them (like if there’s a leaf dam preventing water from moving off the roof quickly enough), it can seep under them and find its way into nail holes or other less waterproof surfaces. And you can see from the wet mark above just how high the water had built up. It must have finally found a way in, and swoosh, down it came, into the attic and the living room below. 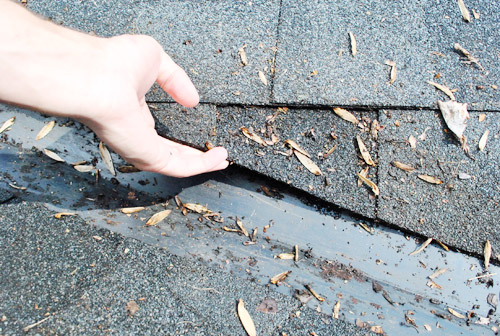 I couldn’t be 100% sure that clearing the leaves would solve our problem, but I was pretty darn hopeful. Hopeful enough that I was even able to enjoy being on a roof a bit. Why yes I did tell Sherry to go into the sunroom and look up at one point. Skylights = a rip roaring good time. 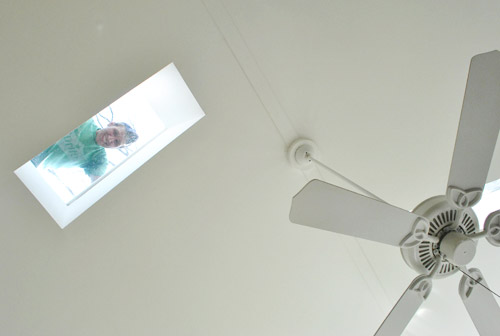 We got to test our repair theory when we got a lot of rain over the course of a few storms that came through Richmond in the last week since the leak. It rained for hours on more than one occasion. And we were actually happy about it for once since it meant that we could test Operation Leaf Removal to make sure we had truly solved the issue. 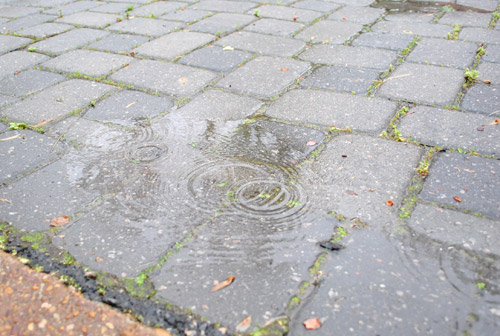 After we survived about 5 hours of rain in the first of two storms, we decided it was time to check the attic to see if perhaps the water just hadn’t made its way into our living room yet (but was stealthily building up in the attic or something). Thankfully the attic looked totally dry. Victory! 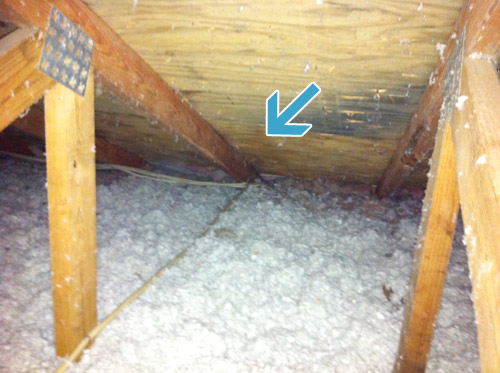 And we had the same luck with the second big rainstorm (once again we checked the attic, and it was nice and dry). So for the time being, we’re considering the problem officially solved – and thanking our lucky stars that the leak didn’t ruin anything in our house, and didn’t cost anything to fix. And now we’ve learned our lesson about letting so many months go buy without checking the roof for leaf build up since there are some spots that we can’t see from the ground – and apparently leaves can be sneaky little buggers. We’re mainly just beyond grateful that the leak didn’t happen while we were in Hawaii. We can’t imagine coming home to a living room full of water.

Who else has a leaky roof story to tell? Was yours easy fix? Did it do more damage? Did you catch it just in time? Did you think your dishwasher was leaking at first? Any tips to pass around to the group about preventing, finding, or fixing leaks would be much appreciated – especially since we felt so inexperienced and unprepared this time around!

Reader Redesign: A Kitchen From Scratch
The King Of Thrones