After over a year of living without one, another bedroom has been upgraded to have a ceiling light fixture – and this time it’s Teddy’s room. Woo to the hoo guys. It’s the best thing ever. I know that sounds like an overstatement, but you don’t know how convenient ceiling light fixtures are until you buy a house without any in all of the rooms upstairs except for the bathrooms. 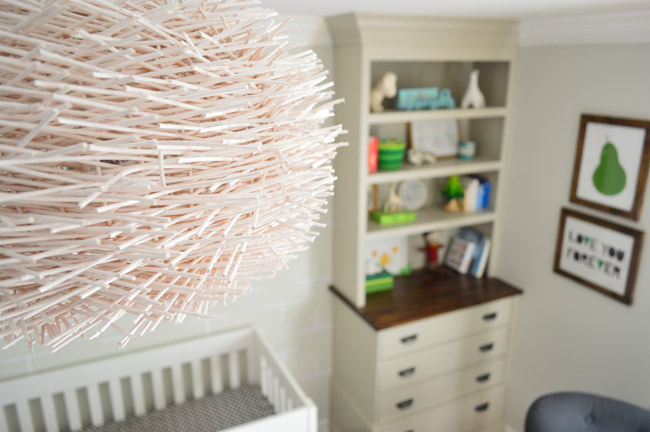 When I saw this stick light on Joss & Main I thought it was fun and beachy-yet-geometric. And call me crazy, but I immediately looked at it and saw a ceiling pendant. To make sure I wasn’t being weird, I ran the idea of converting this plug-in table lamp by John. Thankfully he was right there on the stick light train with me. 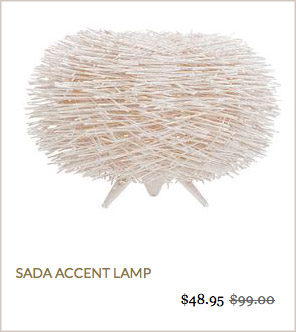 When it came, we turned it over to see what we were working with. There was essentially a small screw that held the cord down so it could sit on a table, so that was the first thing I removed. 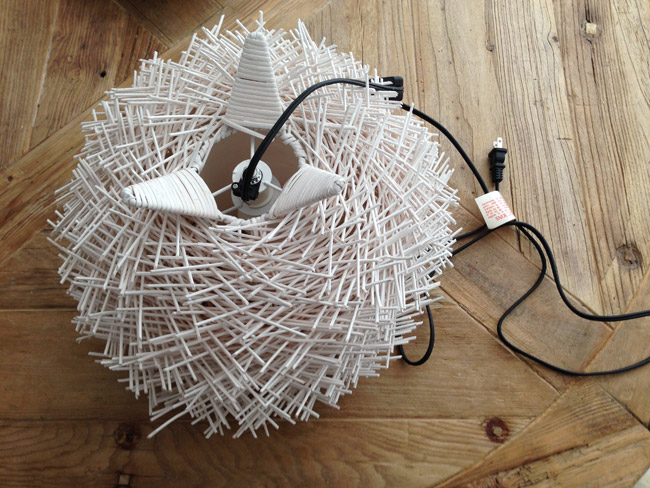 Once that was out of the way… 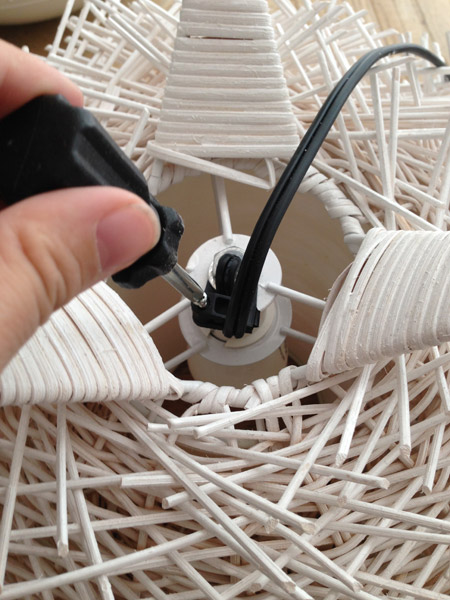 … it allowed me to gain access to this bolt that held the existing cord kit and shade on. We debated just keeping this plug and turning it into a ceiling fixture (often you can cut the cord of a plug-in fixture to expose the inner ones you need to hardwire it), but it happened to have one of those very small bulb sockets – you know for teeny bulbs? We wanted a little more light and a standard sized bulb in there, so off it came. 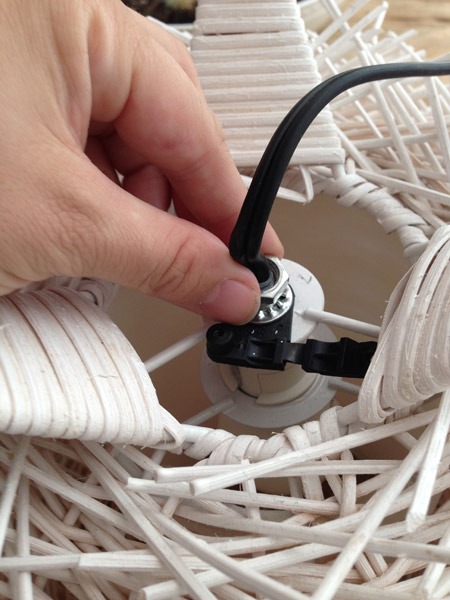 To remove the rest of the original wiring, we were able to unscrew the socket from below… 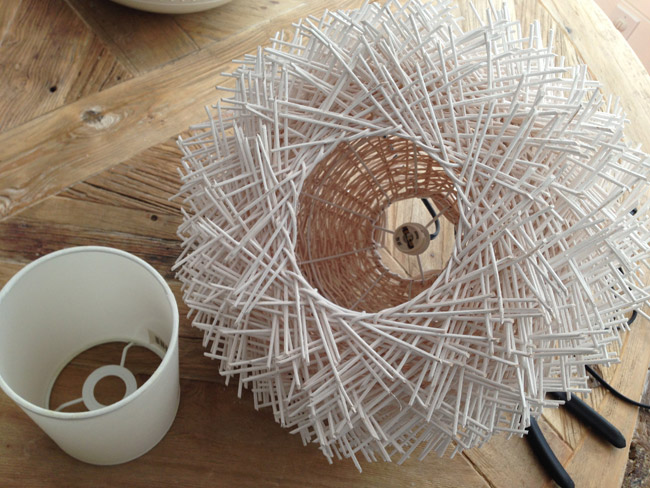 … which freed it up. 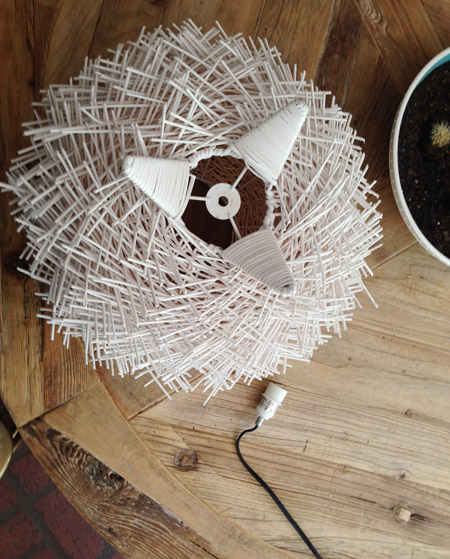 Finally, we were left with just a shade, which we could convert into a hanging fixture thanks to the ring on the bottom which would easily hold a standard light kit (with a standard sized bulb). 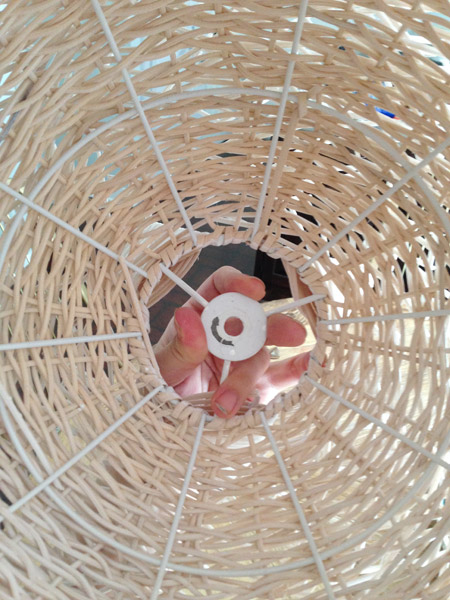 So all that was left was to grab one of these white pendant light kits from Home Depot. 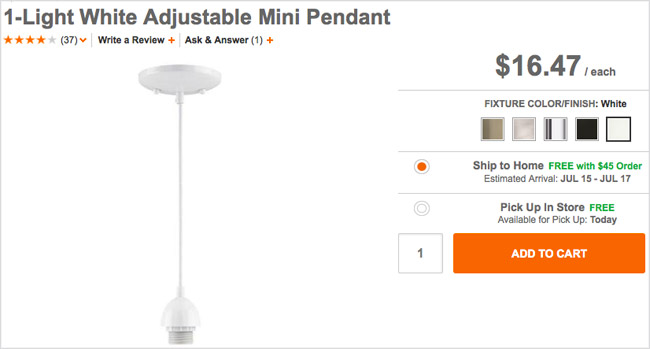 All we did to make it work with the shade was to thread the pendant cord up from below the shade (through that little white ring of the top of the shade) so that rests on the curved white bulb holder, which puts the light bulb right in the middle of the arched stick shade.

But wait, isn’t something made of kindling with a light in it a giant fire hazard?! Glad you asked. Paper lampshades and lanterns (as well as basket shades) are commonly used, so there’s no fire hazard as long as heat can escape out the top and bottom of the shade, and the bulb has ample clearance (i.e., it isn’t super close to or pressed up against the shade). And even though a normal bulb should work in this arrangement, we used an LED bulb which doesn’t cause as much heat buildup as an incandescent bulb (it still needs ample ventilation though!). 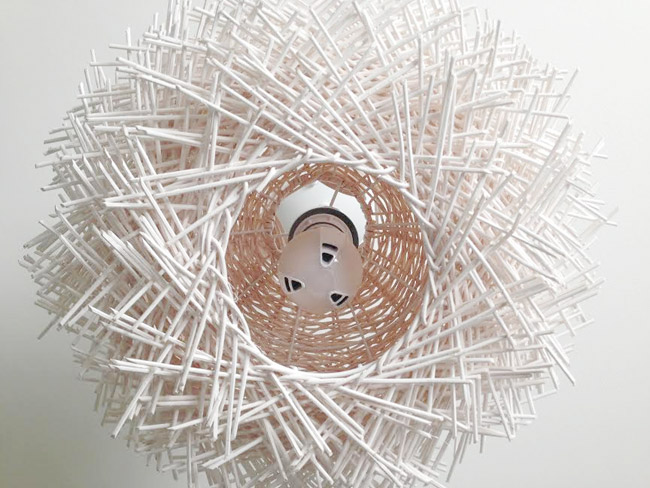 So Teddy’s room is now all hooked up with a warm white LED that should give us about 25,000 hours before it needs to be replaced. Also, it looks like a robot eagle is holding the bulb. John digs that part the most. 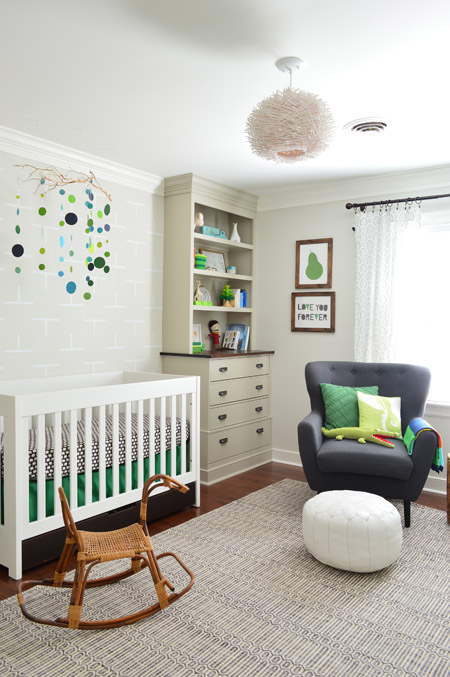 It’s nice to finally have something up there. And the sticks even subtly reference the driftwood mobile and the white lines in our T-wall. 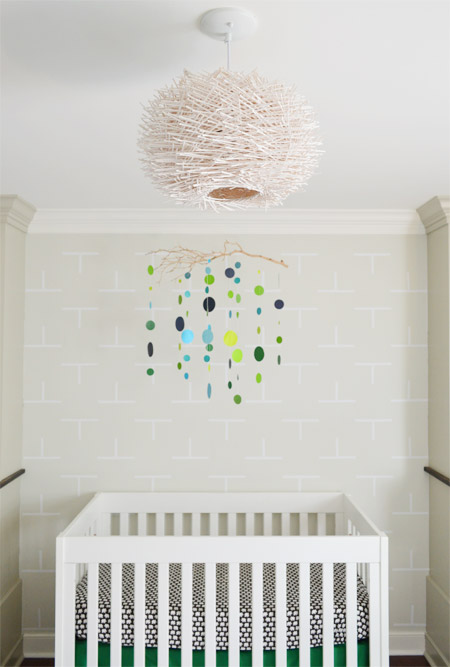 Here it is all lit up. So glowey (say that the same way The Soup says “so meaty”). 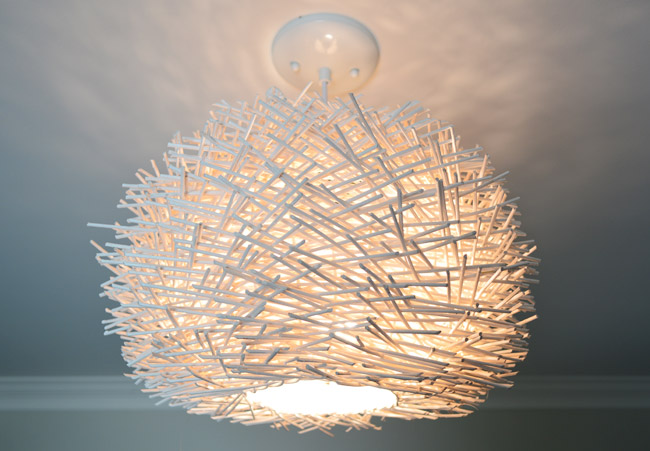 And if you’re observant you might have noticed a little side table action going on, thanks to this yard sale find. 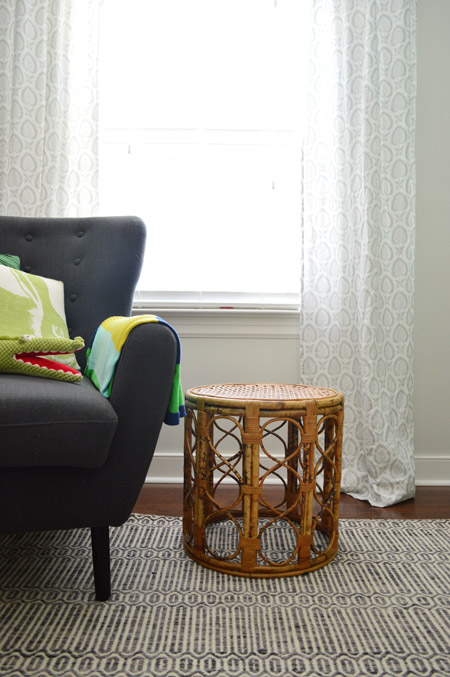 The $1 price tag was too good to resist. 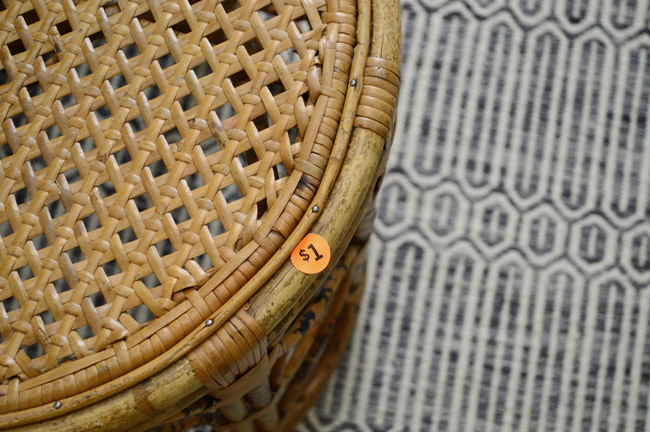 Especially since it’s the exact same color as our old school rocking horse (another secondhand find of ours). So Teddy’s room is pretty much done for now, I think. 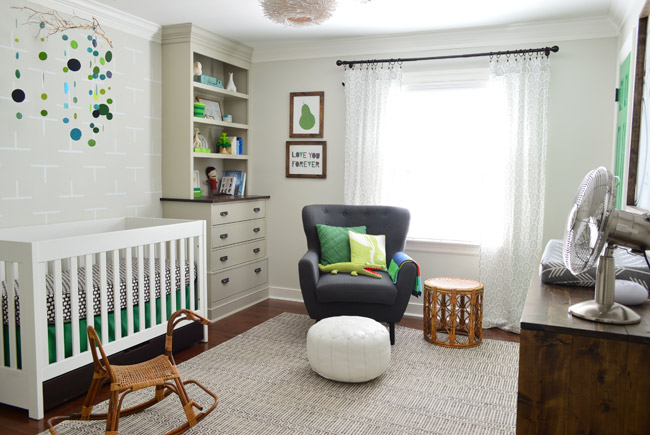 Also, Clara is in here way too much. But it’s sweet. That girl can make that rocking horse look like it’s going to catapult her right out the window, but so far there have been no rocker-related injuries. Now I have to go knock on wood.

Oh wait, and speaking of lights, there were requests to see our bedroom fixture all lit up and glowing at night, so here you go.

We love that it tosses out soft shapes on the ceiling.

UPDATE! We’ve finally transitioned our entire house to LED lights (they save tons of energy & money, and they’re a lazy person’s best friend because you never have to change them). For anyone wondering, these are our favorite interior LEDs. Their glow is warm & natural (not weird/blue like some of the others we’ve tried) and they’re actually the ones you see glowing in these pics (they’re extremely similar to regular bulbs, but they use around 90% less energy).