Sherry, Clara, Burger and I took our little home-improvement-hungry hands on the road this past weekend to help out a few family members in Northern Virginia who, by coincidence, have also moved recently. There must be something in the water – or at least in our gene pool – that has us all relocating lately. First up was my little sister Carrie, who we managed to get zero pictures of so here’s a random shot that she sent me after the fact (that guy on the left is her boyfriend, Robert, who will be making another appearance momentarily). 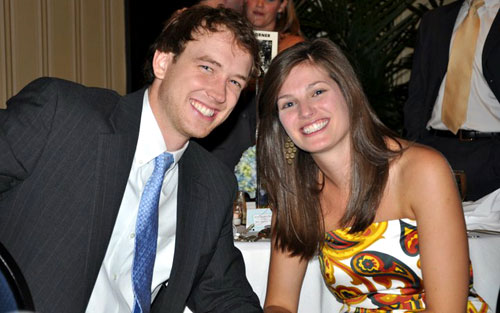 Carrie just rented a new apartment in Northern Virginia last month (you may remember us helping with her first apartment in Philadelphia and her second one in NoVa). She’d been planning the move for a little while, so back around her birthday in February she hinted that she’d like help painting as her actual gift. So Sherry and I wrapped up this little token of our commitment (a painting stir stick with a paint can opener on the end) as her official “present.” It reads: Redeemable for 1 gallon of Olympic Premium Paint And Painting labor – may be exchanged for a Starbucks gift card at any time (since we figured Carrie deserved an out if she decided to forgo painting – or if her moving plans fell through). 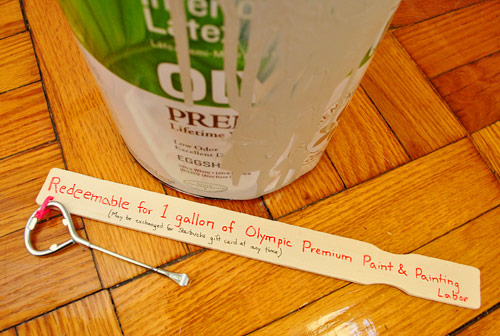 But all systems were go, so we arrived early on Saturday morning to look at the space with her and help pick colors. She and Sherry had chatted about how she wanted a taupe-y tan with a smidge of gray for the bedroom (to match the curtains that Carrie already owned and would later hang). The verdict: Benjamin Moore’s Ashen Tan, color matched to zero-VOC Olympic Premium Paint. We gave her that brand as a gift because we love how pure it is (even the colorants are VOC free) since the bean was with us (we switched off watching her in another room while others got their paint on). We landed on Ashen Tan because it would cozy things up and add some warmth to the otherwise basic white box of a room without feeling too dark or crazy (since Carrie wanted something soothing and classic). Here’s a pic of the space before we arrived: 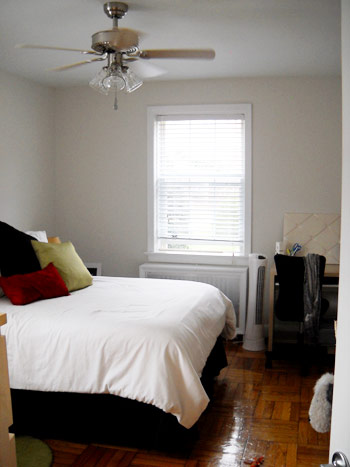 And here’s Robert and me in full on painting mode on Saturday. Robert earns major points for helping me roll the room while Sherry cut in and switched off with Carrie as “babysitter.” Forgive this terrible iPhone picture that Sherry grabbed in progress: 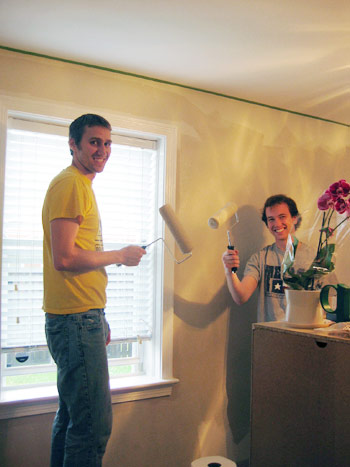 The two coats of paint that the room needed took about two hours to apply – almost less time than it took us to navigate rainy day traffic from her apartment to the nearest Lowe’s (which, lucky for Carrie, was next to a Starbucks) and back. When we came back the next morning to help put the room together again (once the walls were dry) the freshly painted room was looking much, much homier thanks to the warmer walls: 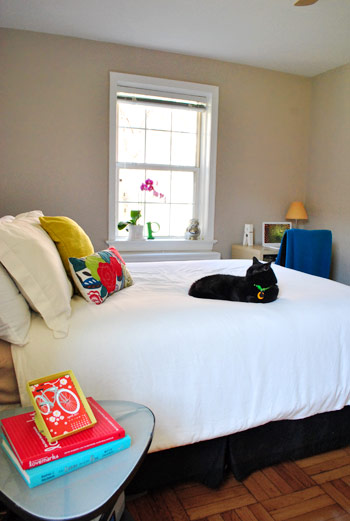 Carrie would be annoyed with me if I didn’t emphasize that she still has art, pictures, and curtains to hang (maybe we’ll share an update pic in a while). She also plans to gradually replace some of the Ikea furniture down the line with pieces that are a bit less common (perhaps a craigslist find or two). But we still think it looks quite nice for just moving in a few weeks ago. Isn’t it amazing how even something subtle on the walls can take a room from “generic rental” to “cozy home”? 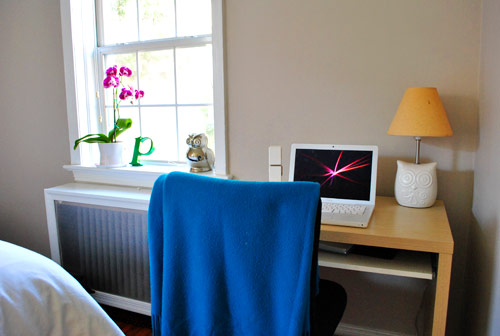 Carrie also already owns a lot of great accessories that help add a happy splash of color here and there (with more to be hung, like art and curtains) so the room still feels vibrant despite the muted wall color. Because you know Sherry went nuts feathering the heck out of Carrie’s nest with things like the blue throw over the chair and the pillows on the bed and these colorful accents on her side table before we snapped any after pics. The girl can’t help herself. 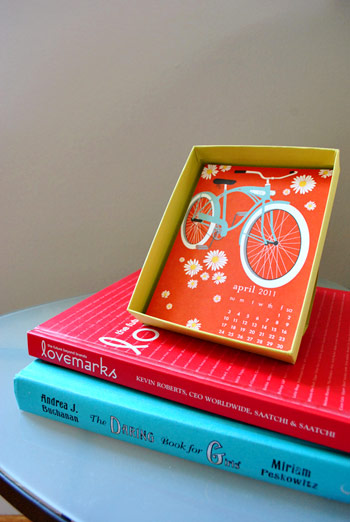 Even Carrie’s cat Duncan seemed to be digging the cozier vibe. Something he didn’t dig very much? Having to be trapped in the bathroom while we painted. Thanks to his keen interest in the process (he kept trying to rub up against the paint can and tiptoe through the paint tray), it seemed like the best plan (but not to him, of course). As for Burger, he voluntarily camped out in his crate (aka, his home away from home). 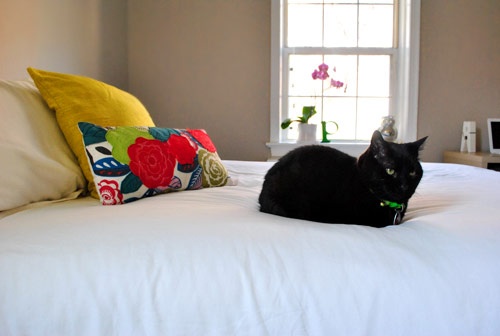 Of course, my favorite picture from the day is this one – which I jokingly snapped while Sherry adjusted the side table. When she heard the shutter clicking and asked what I was shooting, I lied and said “just white balancing.” I figured I’d get a laugh (or at least an eye roll) when she spotted her less-photographed end in the day’s photos when we uploaded them. Never did I suspect that she’d let me put it in the post. Her response “oh why not, we’ll keep it real.” Best wife ever. 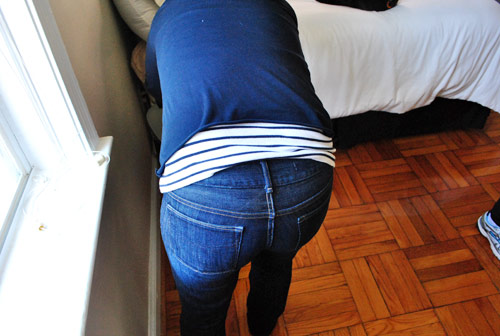 Carrie’s still planning to paint her living room, but the size of the apartment kept us from being able to clear two rooms at once. So it’s gonna have to wait a bit. But we did use this trip to help Carrie select a cheerful artichoke-y green color for those walls. 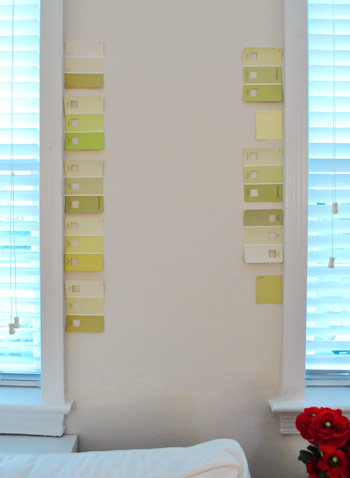 While Robert and I rolled (and rolled, and rolled) the ladies settled on Fennel Splash by Valspar (sorry, I’ve got no clue which one that is in the pic above). And when I say “ladies” I do include Clara in that group. Look how much interest she takes in paint swatches. That’s my girl. 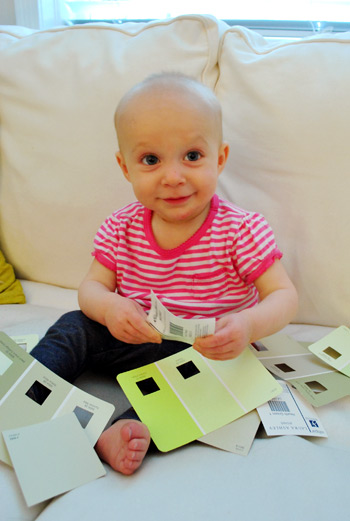 After all of the Saturday painting adventures at Carrie’s new apartment, we headed about 15 minutes away to my cousin Travis’ house. Travis and his wife Cat and their almost-2-year-old daughter Elsa also moved last month (Cat is Sherry’s best friend of 11 years who we introduced to Travis, then they got married, and the rest is history). They needed a larger house because baby #2 is expected to arrive any day now (although Cat’s hiding it well in this pic we snapped, she’s actually due next week). 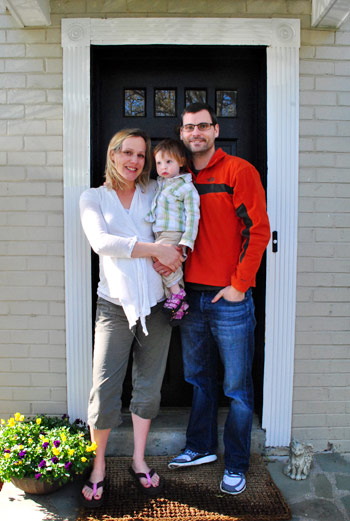 They’re a stylish bunch, so we’re excited to see them get more settled so we can eventually officially House Crash them. Even though they’ve only been in their new place about four weeks, we were already loving things like their new yellow and gray bedding (from Target) and the fun yellow rug (from Garnet Hill). 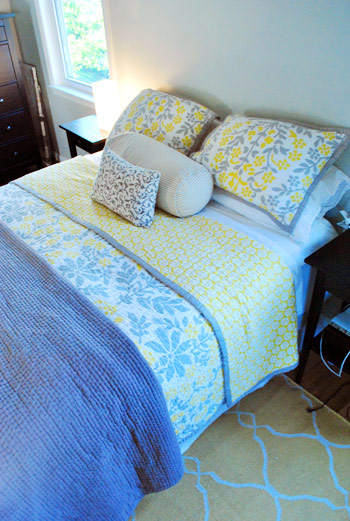 Sherry even found herself helping Cat with a small house project on Sunday morning – hanging a collection of frames in one of their spare rooms. Leave it to my wife to happily take a hammer to someone else’s walls. 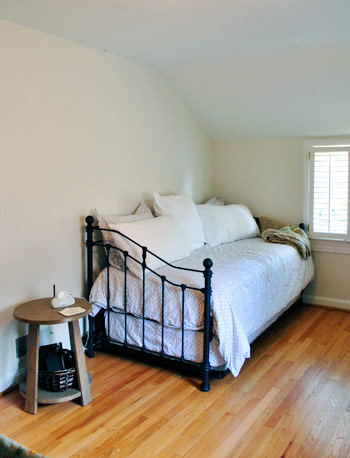 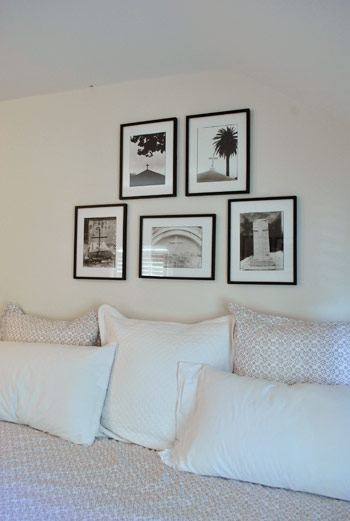 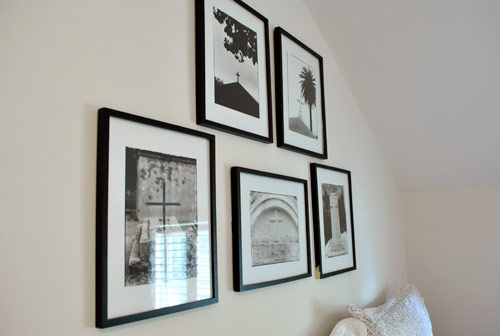 Since it’s the last visit we’ll have with those three before they become four, Sherry also used it as a chance to deliver her homemade baby book for Myrtle (the placeholder name they’ve been jokingly using throughout Cat’s pregnancy). They haven’t found out if it’s a boy or a girl, so the book had to work for either one. 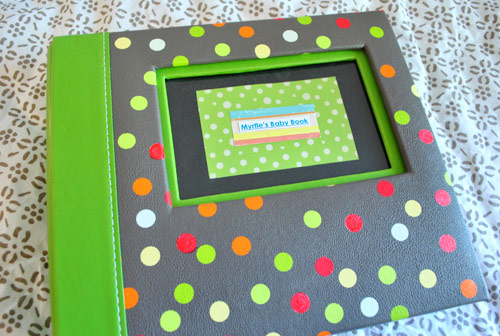 Sherry made it the same way that she created Clara’s homemade baby book (the template is free for you guys to download here). It’s basically just colorful scrapbook paper (from Michael’s) slipped into a sleeved scrapbooking album (also from Michael’s) with home printed labels on each page (from this template Sherry made) for listing lots of memorable moments. Like events and trends from the day he or she is born (for Clara’s we put The Snuggie and Justin Bieber hair)… 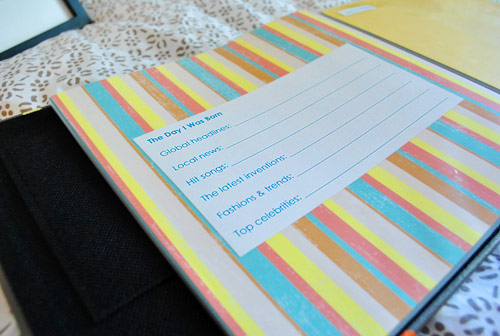 … and mom and dad’s predictions for baby’s features, firsts, and favorites (which we witnessed Cat and Travis fill out right then & there) – among other things like developmental milestones and all that good stuff. 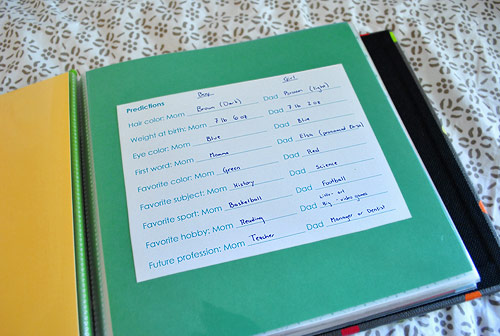 We didn’t assemble all of Clara’s book until after she was born, which meant that creating one for a bun that was still in the oven required a few placeholders – like these little footprint cutouts that Sherry made (which will be replaced with the real thing once the baby arrives). 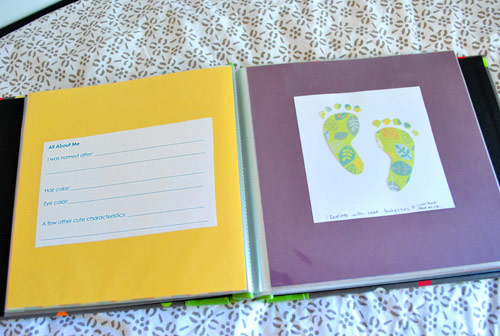 Despite how much we enjoyed all of the painting, picture hanging, food eating, baby watching, and competitive board game playing* – this was perhaps our most favorite moment of the weekend: when Elsa snuggled Clara and Clara leaned over and nuzzled her right back. And how miraculous was it that I actually had the camera on hand? Maybe that’s why I got to put Sherry’s butt in this post. I earned some major daddy points for capturing this cute Clara-Elsa cuddlefest. 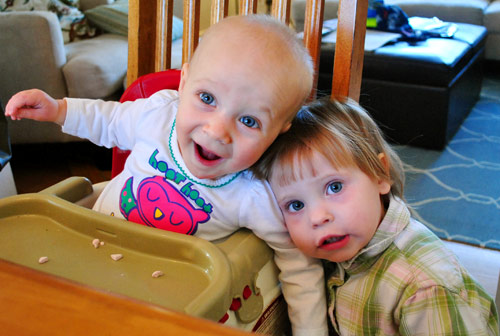 *We mentioned board games as one of our oh-yeah-we’re-wild weekend activities with the fam (there’s nothing like blowing off some room-painting steam like a rousing game full of smack talk and competition). This time our game of choice was Apples to Apples, and we accidentally invented a fun slash weird variation that we thought we’d share. In each round we blindly threw in an extra red card from the deck for the judge to consider (we started calling this non-existent extra player “The Computer”). It’s surprising how many times the random card was chosen over the ones that us human players thought long & hard about (which created a fun everyone vs. The Computer rivalry and a few “I can’t believe that was random” moments when The Computer played the best card). In fact, The Computer nearly won the entire game but Travis narrowly beat it in the end by just one round. Crazytown. Do we know how to let our hair down or what?

And speaking of keeping it in the family, we’ll leave you with this video of Clara and Burger that we took after we got home. Just because it’s our favorite thing ever. Could our kids (both of the four-legged and two-legged variety) be any cuter? I don’t think so.

How To Build A Console Table: It’s DONE!
Buying & Installing A Rain Barrel For Earth Day