Q: My husband Tim and I just bought our first fixer upper two weeks ago in Fort Worth, Texas. It is our second home and we hope to make it our last. Falling in love with our home was the easy part, but the thing is we just don’t know where to start. Should I mention that we have a 19 month old little ball of energy “helping” us? I know you don’t know what our house looks like nor do you know what our plans are for it. I won’t bore you with the details, I just want to know if you have a post about getting started; about how to go about making a plan so that we can go about this process efficiently. Or maybe I’m over thinking it and we need to just dive in? – Amanda

That big “where do I begin?” question is something we get asked a lot, both in comments on posts like this, and in emails like Amanda’s. And since we’re at “the beginning” again, it felt like a good time to write about our process. So here are six questions we’ve asked ourselves after moving into each of our houses that have helped us prioritize our to-do list. 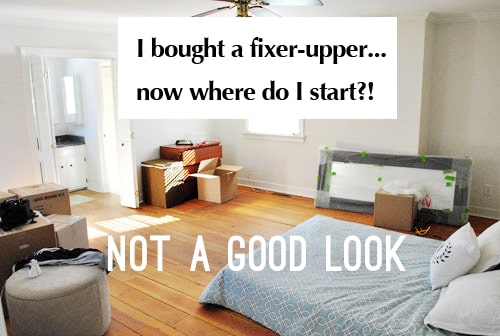 #1. What’s necessary for us to safely inhabit this house? If you’ve bought a fixer-upper (or any house that revealed some surprises during the inspection), this is probably a question you’ve been faced with. What’s broken, malfunctioning, or so deteriorated that it must be rectified in order for you to move in? 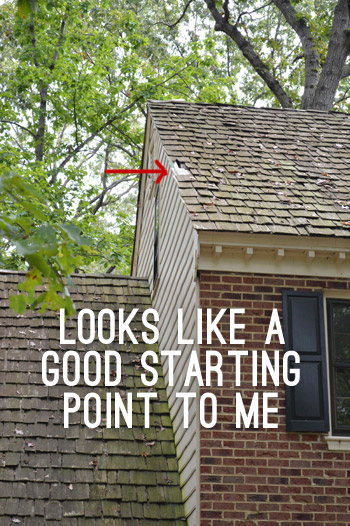 Is there a mold problem? Broken windows? A heating system that’s not up to code? A swarm of bees living in the attic? Some of these may not be cheap or “glamorous” projects, but it’s probably a no-brainer to put them at the top of your list. In our most recent move that list consisted of four get-on-it inspection items: a malfunctioning furnace that needed to be repaired or replaced, a few dangerous trees that needed to be removed, some rotting wood and siding that needed to be redone/repainted, and an old roof that was actively leaking.

#2. What would be easier to do now, rather than after we’ve moved in/unpacked? This is a tougher question because almost everything could fall in this category. Bathroom remodels. Kitchen gut jobs. Heck, even simply painting each room. They’d technically all be easier to do in an unoccupied space, but it’s often not a realistic goal to accomplish a bunch of major renovations before you move in, and sometimes you just like to live somewhere before rushing into picking every wall color anyway. So we’d suggest picking your tasks wisely. We actually think kitchen and bathroom renos turn out better if we live in the house for a while (that’s the only way we ever would have thought about closing off a door to gain almost 65% more cabinetry and counter-space in our first kitchen). 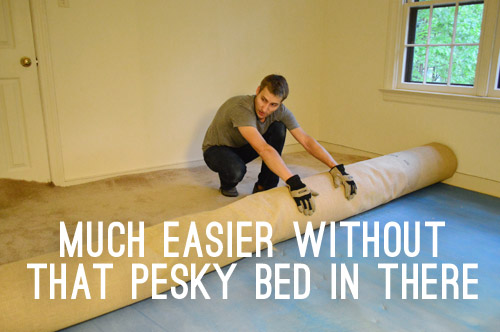 This time around, Sherry and I chose to tear up musty old carpeting upstairs, spray all of the blue/mauve trim up there white, and install hardwood floors before move-in day. Out of everything on our list, it was the hardest to imagine doing those things after all of our furniture came into the space. The good news is that we were 100% sure about what flooring we wanted. But if we weren’t able to find flooring we liked, this task would have been put on hold and something else would move to the top of the list.

So one tip would be not only to brainstorm what’s the most helpful to tackle first, but also to make sure you’re going to be happy with that new look/material/choice for the long haul. If any part of you is uncertain, it’s probably best to move on to something that you’re more sure about instead of rushing into something you’ll regret. And since we’ve painted two houses worth of rooms/ceilings after moving in (and prefer to think about wall colors over time instead of choosing them all at once) that approach works well for us.

#3. What will make us feel comfortable and “at home”? In all of our moves I’ve experienced a period where I feel like I’m living in someone else’s house. Something about living amongst their design choices makes it hard for me to feel like the home has become ours. Obviously big gestures like tearing out the kitchen would do the trick, but that’s neither an easy or a quick fix (aside from it being one of those things we like to think through for a while). So we prefer to tackle a few simpler tasks after moving in that make things feel more like us. Like getting rid of dated curtains and carpeting – or, my personal favorite: painting. I remember how painting the first wall in our last house was the turning point where I felt like the house finally belonged to us – even if we ended up changing the color down the road. It was an important momentum-building (and morale-building) step for us. 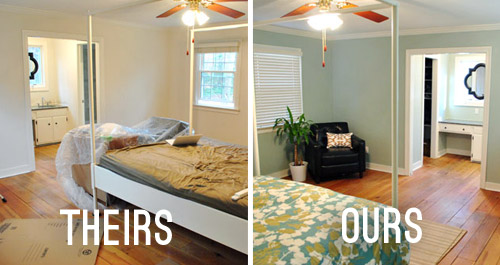 Oh and this feeling of not being able to relax in “someone else’s house” is probably compounded by the general chaos and exhaustion that goes along with moving and unpacking. That’s why I think it’s helpful to put something on your list that will help you feel like you can put your feet up and fully “settle in” to your new space. It could be small, like setting up a reading nook with your favorite chair and a lamp or even just hooking up the TV so you can decompress after a long painting session. In our last two moves we set up Clara’s room on the first day to make sure she felt at home quickly, and then moved on to our own bedroom. Because sleeping on a mattress on the floor certainly didn’t scream “comfort.” 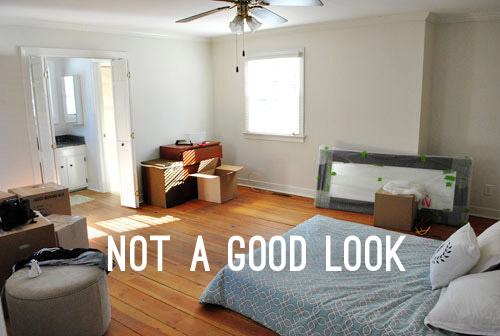 #4. What can we afford? This one’s pretty self explanatory, but if you have ten things on your to-do list that you can’t wait to tackle, but you can only afford to take on three of them, bump those guys to the front of the list and get going on them while you wait for your savings to build up again for the larger/more expensive tasks. For example, when we had those four important inspection items to take care of from tip #1, they made us feel like we turned the money faucet on high and drained our entire bank account. So we dove into nice cheap (and even free) projects, like stripping wallpaper, painting trim, removing an old glass shower door, ripping up more carpet in the sunroom, painting a bathroom, painting our front door, etc. They’ve definitely helped us stop the money bleed and made us feel more in control while we slowly build our savings account back up.

#5. What’s quick and easy? If trying to answer the above questions didn’t leave you with any clearer sense of where to start, then just keep it simple. Getting a new shower curtain or organizing your silverware drawer may not constitute an earth-shattering design decision, but it’s certainly better than doing nothing at all. Accomplishing lots of fast and affordable things can add up to an updated room – and eventually, an updated house. 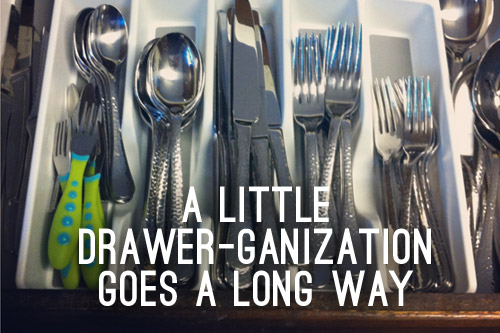 #6. What will make us the happiest? In the end, you can throw all the logic, reason, and worry that you’re doing the “right” or “most important” thing first – but it really comes down to doing what makes you smile. And often times, that’s something free and something that you consider to be more fun than work. On our first night here I was initially surprised to see Sherry playing around with the items on the built-ins in our living room. Of all the things to do, that seemed pretty far from crucial. But as I sat on the sofa resting my weary moved-ten-million-boxes bones, I could tell that it was her way of relaxing into our new space – and that having one not-trashed corner to rest her eyes was her way of finding peace among the chaos. 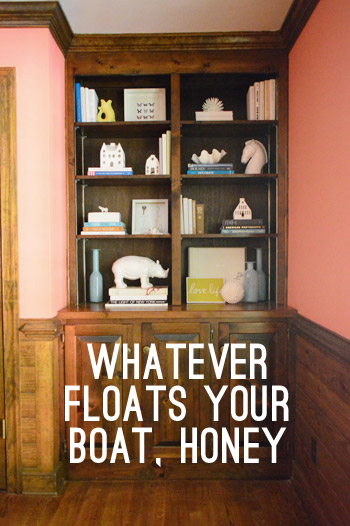 In the end, the good news is that it’s hard to mess this up. Because no matter what starting point you pick, you’re already doing something right by doing something at all. The truth is that the right starting point (or the right order) is most likely different from person to person and house to house. How do you guys figure out where to start or what project to tackle next? Are their other questions you ask yourself that help you sort through your to-do list. We’d love to hear ’em, because we’ve got quite the list going on ourselves!