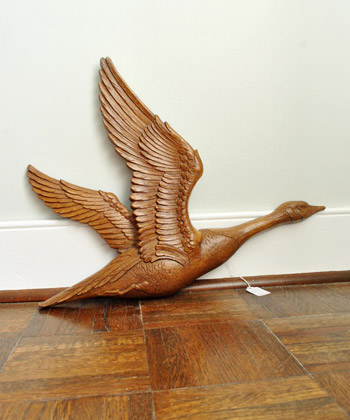 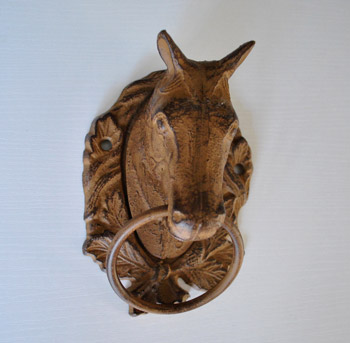 So apparently my little self-imposed Dude Get On That Already challenge is just a sick joke where the universe tells me: “hey crazy lady, stop hoarding animals in the playroom.” But at least I’m getting things off the floor in there and up on the walls of the rest of the house so they can actually be enjoyed (or that’s just the denial talking). So without further ado, two more thrift store finds from here and here. Yes, this week was a double whammy of getting on that, since no painting was required. And they’re both over a year overdue. Another big surprise. So it was time to get these guys up on the wall (especially give the untimely death of our dear friend Ramsey).

I made John hold this so you can see the weird way we hung him up in the right place and at the right angle with just two nail holes (instead of ten while we scooched him around to find the right spot and cursed ourselves for not making some sort of a template). We just stuck some painters tape around him (sticky-side out) and poked holes in it where the hooks for the nails are (just stabbed the tape with a pen there). 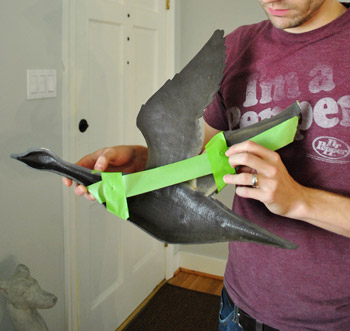 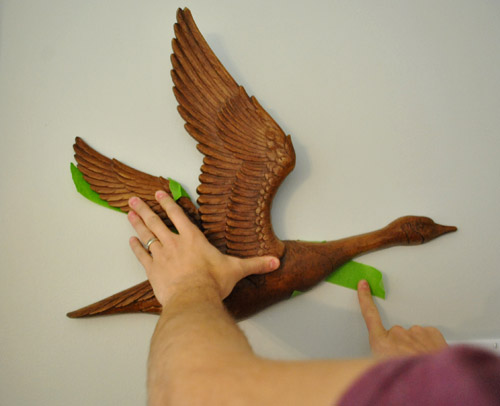 And then we pressed it against the wall firmly around the back of the ol’ bird to make sure it would stay on the wall. 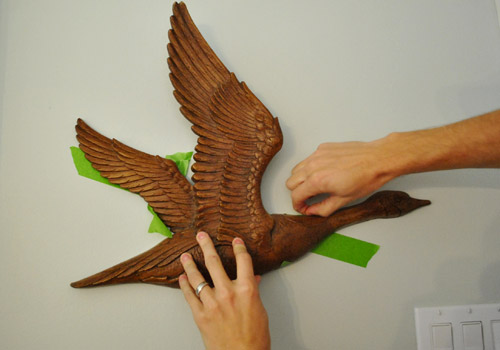 Then when we pulled our little $8 thrift store duck off. 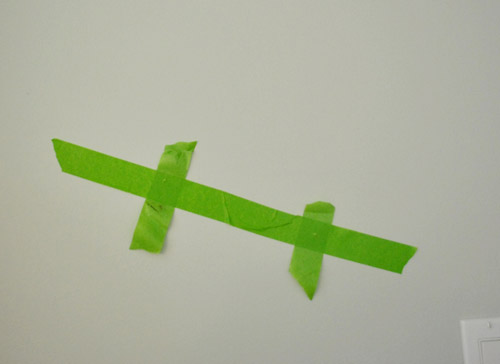 The tape became a little duck-hanging template. See how our little pre-poked holes are left stuck to the wall to show us exactly where our hanging nails need to go (and on the exact right angle) to hang this guy? 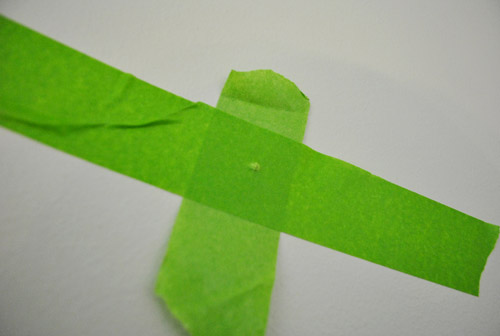 So here I am hammering those babies in (this guy’s really light, so no screws and anchors were required). Once the nails were in I just ripped off the painter’s tape while screaming Kelly Clarkson. 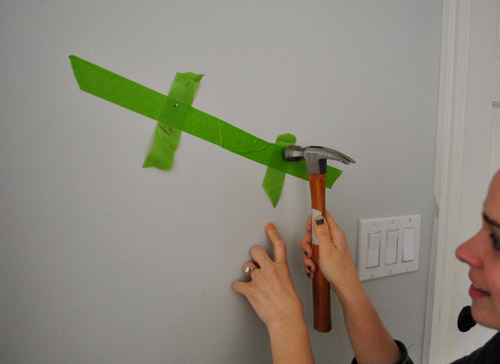 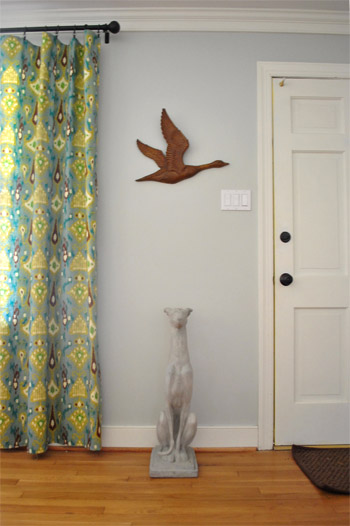 Yes, the concrete greyhound underneath Sir Duck (an old V-day gift from the hubs back in 2008) is further evidence that I have an animal problem. 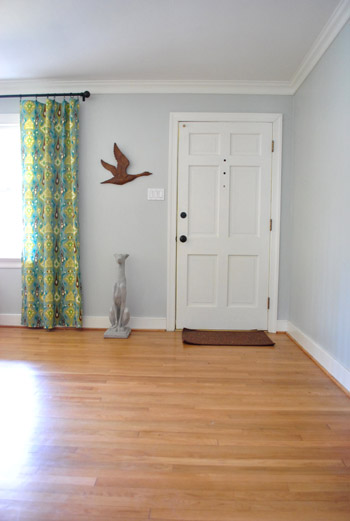 But seriously, how bad-a$$ is this guy? We love that he’s flying towards the front door. And if the rest of the dining room weren’t full of secret book projects we’d share more panned out pics to show how the dark wood tone picks up on the big chunky dining table nearby. Soon hopefully. 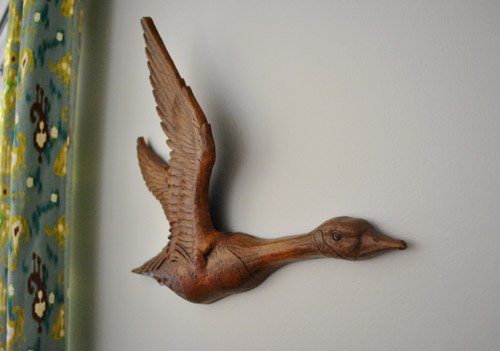 Now onto matters of the iron-horse kind. From the start we had plans to hang this equine delight in our bathroom with a towel through the ring. So a year after adopting him for $7 from a Delaware thrift store I finally did. He looks a bit lackluster now because the room is a big white box, but once we get around to painting and tackling some other updates we think he’ll be downright dapper. 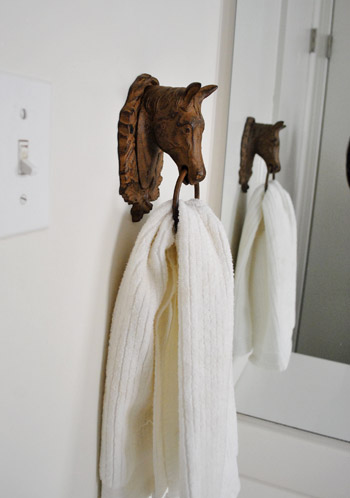 It was fun to keep both of these guys au naturel. I mentioned the possibility of painting them both back when we bought them last year, but I think we’re moving into a phase where sometimes we just like things with some texture and some timeworn “patina” (aka: as they are). But you know I’m still no stranger to the ol’ spray paint can, so I think it’s one of those 50/50 things. Ya never know if I’m going to spray paint you or leave you well enough alone (or hide you in the playroom for a year, apparently). 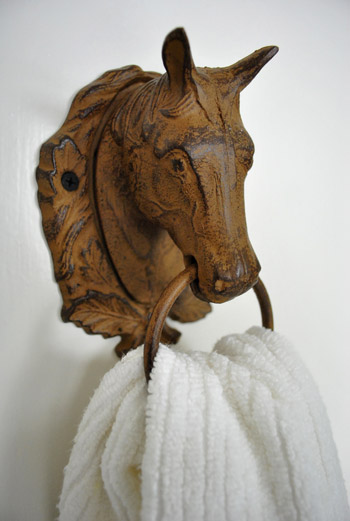 How have we not had a hand towel hook in the hall bathroom for the last year? That’s the main bathroom that all of our visitors use. Yeesh. Glad we finally got on that. Our towel just used to lay in a heap next to the sink, but now it has presence. It has pizzazz. It has animal magnetism. 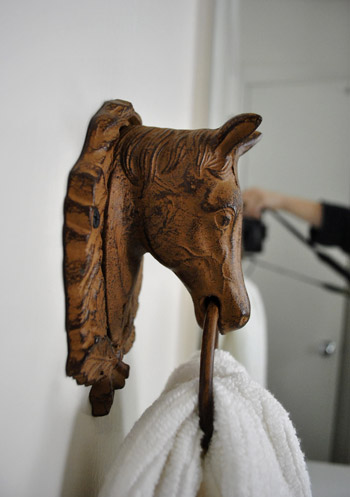 In summary: our bathroom has 99 problems, but a towel hook ain’t one. 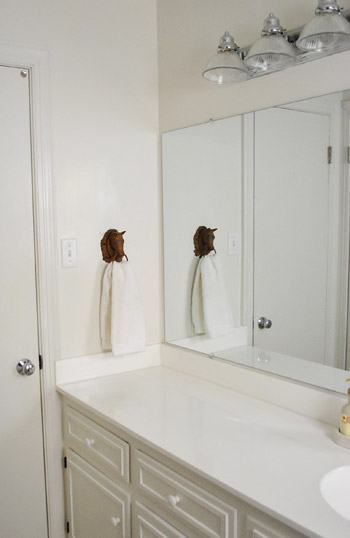 I’ve actually been thinking a lot about the five million upgrades that we’d like to do to this bathroom, so maybe it’ll be next on the ol’ agenda (after we finally finish off the never-ending kitchen makeover). Oh and since folks have been asking if we’ll have anything left to do once the kitchen is done (ha!), here’s just a smattering of the bigger projects that come to mind (along with about a million smaller upgrades/projects as we go):

So yeah, there’s lots to do! But back to the fact that I need Animals Anonymous. Do you think Animal Hoarders is going to show up at my house? If they do, they’ll just get to chat with our house-sitters since we’re currently on a plane to Portland. Haha. The joke’s on them.

Speaking of our currently-in-flight status, we’re most likely going to post the second post of the day a little early (at noon EST during a plane change) and then won’t be available to approve comments between 1-6 EST while we’re on our second leg of the flight, so bear with us if there are only a few comments for five hours and the rest are hanging out in moderation! We moderate so we don’t miss questions (when thousands of contest comments roll in early in the week, it’s easy to lose them otherwise), but they should pop up eventually!

Have you guys finally hung any art or bathroom accessories that you’ve been meaning to hang for, oh, over twelve months? Let’s commiserate.

Fab Freebie: Made In Portland
How To Make An Emergency Kit & Have A Plan In Place