Update: Thanks so much for all the kind words and general awesomeness on yesterday’s post. You guys rock my socks.

Ladies and gentlemen, we actually have a backyard. Well, we still need to get some grass going on, but three phases of digging and transplanting and weeding (here’s phase one, and here’s phase two) have definitely turned our Jumanji-esque backyard into a nice clearing for Burger & Clara to run around in… once that aforementioned grass makes itself at home. And we still have a ton of giant trees on the side and back of our lot to keep it from feeling too open and stark, which seems to be the sweet spot for us.

But enough jabbering, the pics do all of the explaining anyway: 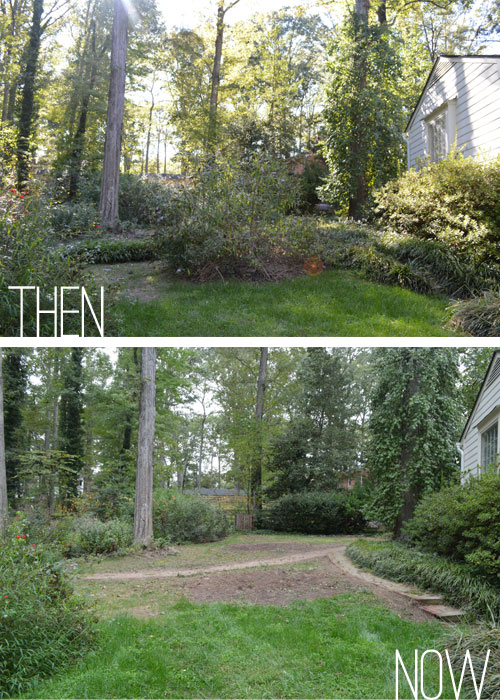 As you can see, we leveled the second 15′ wide planting bed, and dug up the rest of the borderline-insane amounts of liriope that encroached on the area that we’d rather just seed and mow for a nice lush little swatch o’ grass. We also brought in some dirt from the back of our lot (free!) in an attempt to level everything out to get it ready for grass, although we’ll add a little top soil when we seed just to be sure we’re giving those little grass seeds all the reason in the world to take root.

We also did some tree-maintenance in the form of cutting these two giant vines that are cannibalizing an old oak tree (they’re so thick and crazy that during Hurricane Irene we worried the extra weight of the vines and the dense leafy branches would pull the tree down on our house). You can see which tree they’re on if you scroll up to the before and after pics above (it’s that crazy leafy-looking mass hugging the tree next to the corner of the house on the right). 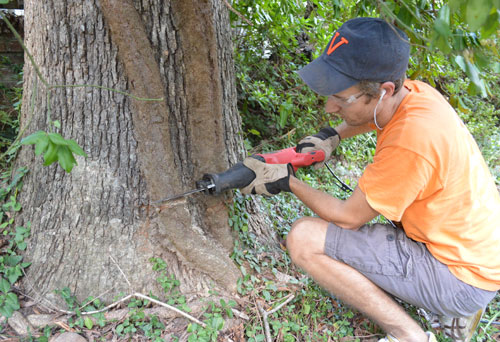 Reciprocating saw + John = buh-bye oak-strangling vine. We actually heard from a certified landscaping expert that we hired back in April thanks to a Living Social deal (more on that here) that it would be best to remove any vines from all of the trees on our property, just to keep the tree in the best possible health and not have to worry about them choking the trees or making them fall in a storm. And you apparently just have to cut a chunk out from the base so the roots can’t keep sending nutrients up through the vine and it should slowly die off (then you can yank it off the tree if you don’t like the look of a bunch of dead leaves hugging your tree like a beer koozie). We’ll keep you guys posted on how that goes… 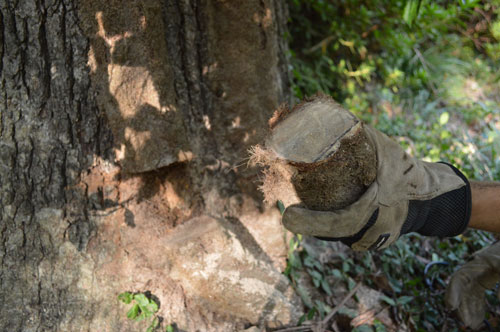 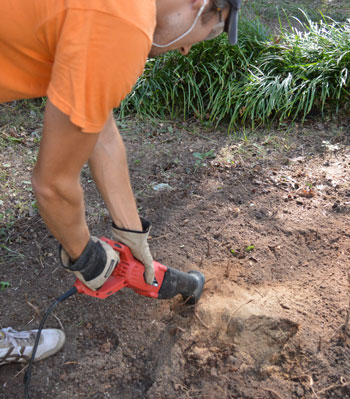 … and we also had another brush with nature. Although this time it wasn’t a tiny snake, it was a baby squirrel. Cue the collective “aww.” This picture doesn’t do his insanely cute size any justice, but take my word for it, this is totally one of those baby animals that you’d see on Pinterest and let out a gasp at his sheer adorable-ness. He was smaller than my hand and quite wide-eyed and bushy-tailed. 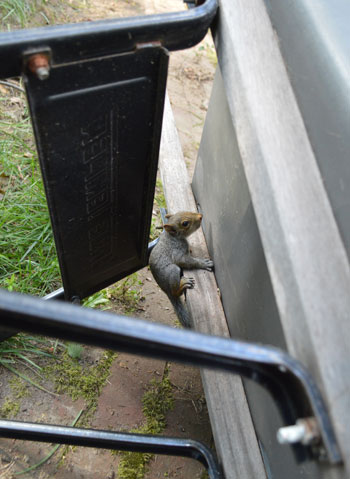 But back to the yard progress. At the end of another 3 hour span (aka: another Clara nap), we had completed our third and final phase of bushwhacking and finally have reached ready-to-seed status. Woot! 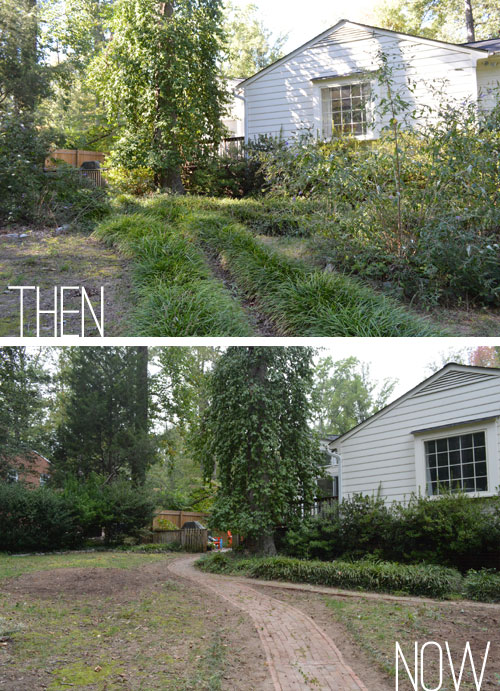 It’s so funny because every time I turn the corner to walk into the backyard from the patio on the side of the house, I think I’m going to be met with the view in the top pic, so it never fails to make me jump when I see the cleared out view from the bottom pic instead. 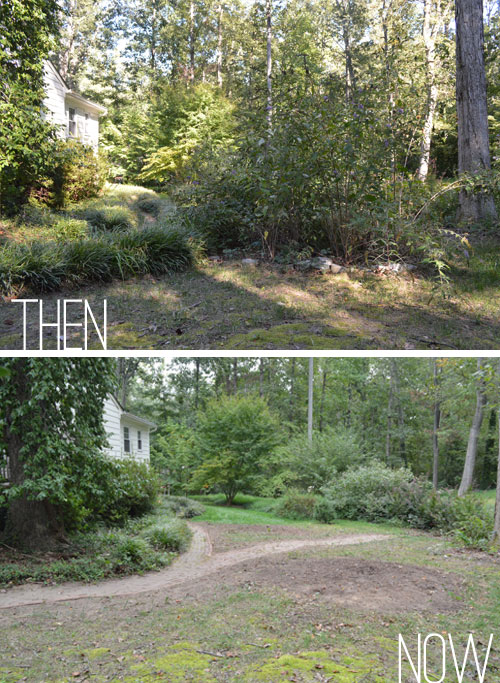 It definitely looks kind of stark now, but we know when we get a nice lush carpet of green grass going on that it’ll be awesome and open without feeling too cleared out since our lot is almost an acre that’s chock fulla wooded area on both sides of the house along with most of the area behind the house. So this will just be one open and grassy area for Burger and Clara to have fun in while various woodland creatures can do their thing everywhere else.

Oh and here’s a really great example of how a giant planting bed can block your whole house from the back. And then after a few days of work, it can be history. Poof. Begone house-blocking bush. 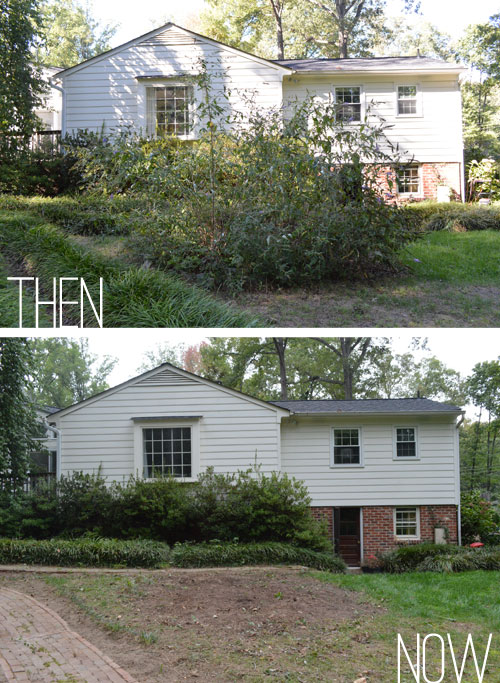 So much better! And I can’t even explain how happy we are to see the old brick paths again (so charming!). After nearly two years of staring at about two-bricks-worth of them while the rest was completely covered in leg-tickling liriope, they’re a sight for sore eyes (and itchy liriope-groped legs). 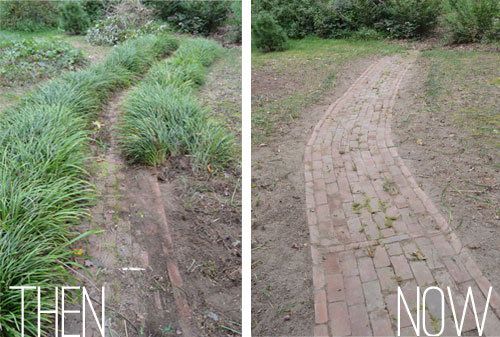 So there you have the latest on our backyard progress. Of course we’ll share seeding/grass-growing pics whenever we can, but we’re pretty psyched that this whole area just took a few pretty serious (but totally doable!) days of work to result in some pretty major changes.

Do you guys like to tackle your outdoor projects in phases? Do you dream about having a certain landscaping setup when you move in (like we did back in 2010) but then take a few years to get your momentum up (we’ve almost been in our house for two whole years, so it’s about time for this!!). It’s amazing how time can fly when you’re putting off yard work…

Skeered.
Drilling Holes In Your Pumpkins For Spooky Wood Snakes