Who watches Jersey Shore? Remember when they went camping and Deena stood on that picnic bench and said “the wilderness!”? For some reason it made me laugh. I’m from Jersey though, so it might be a you-have-to-be-from-there thing. Anyway, we mentioned that we had lots of outdoor upgrades on the agenda this spring, so let’s get into it, shall we? Remember how our yard looked like this when we bought the house?

And then we limbed up the magnolia and transplanted/removed a lot of the bushes and painted the front door, to get it looking more like this? 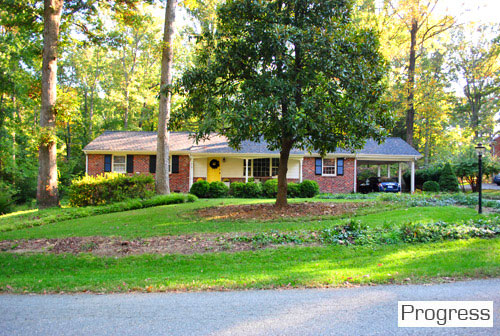 Well, it has definitely come a long way, but it’s still a far (far!) cry from where we’d like it to be (to the point that we apologize to our neighbors way too often for weedy patches of dirt in the middle of the yard and dead flowers by the mailbox, etc). So when a deal came up on Living Social for a one hour consultation with a certified landscape designer named Katherine Brooks for $60 (instead of $125) we went for it. 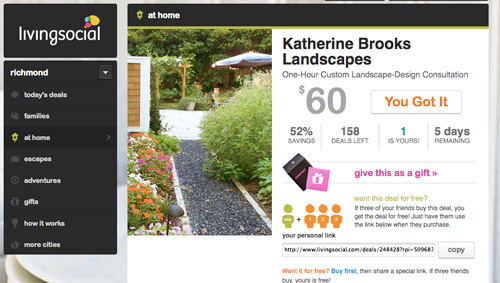 It might sound weird for two people who are crazy about doing things themselves to pay sixty beans to a landscape expert, but we’re black thumbs. So someone who knows all about what to plant (or transplant) where, and can plant ideas (see what I did there? it’s a landscaping pun) that we’d never come to on our own accord definitely has value to us. For example, about five minutes into our consultation with Katherine (who was very nice by the way), she mentioned that we’ll never get any grass to grow under the giant circle beneath our limbed up magnolia because the roots are so shallow they crowd out grass. We had actually planned to seed that area in the spring and the fall and hope for the best, so she easily saved us sixty bucks worth of grass seed and water and a whole lot of time and frustration while offering up a nice alternative solution (more on that in a sec).

She also tossed out a list of plants that she thought would do best in certain areas of our yard, and a bunch of suggestions about what we could transplant (you know we love working with what we have), general sustainable landscaping tips for our area, how we could reconfigure our garden beds (she even brought one of those sprayer things to mark off the grass), and identified lots of existing greenery for us (knowing what something’s called means we could google how to care for it or transplant it). So we’d say it was money well spent – and you know we’re cheap, haha. When she backed out of the driveway we already had a four page plan scribbled down in a notebook. Here are just some of her suggestions: 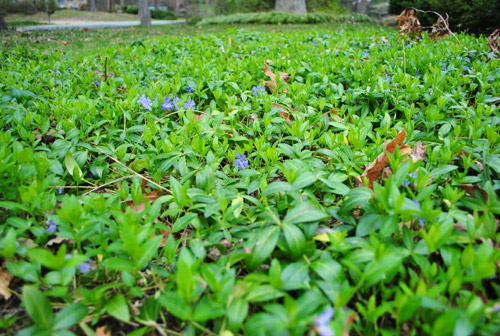 …. around the base of the magnolia since it’s one of the only things that can grow there and hide that circle of dirt… 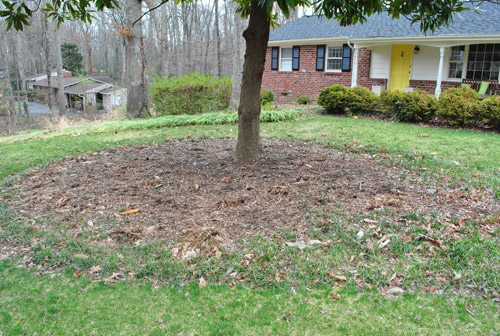 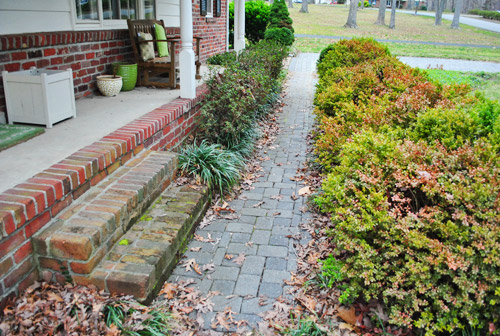 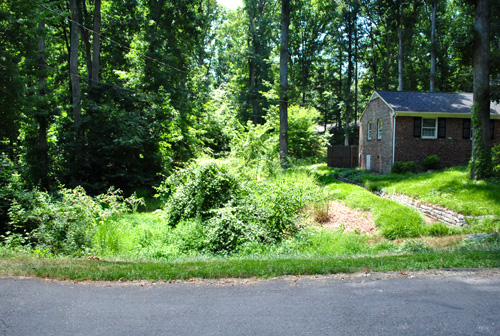 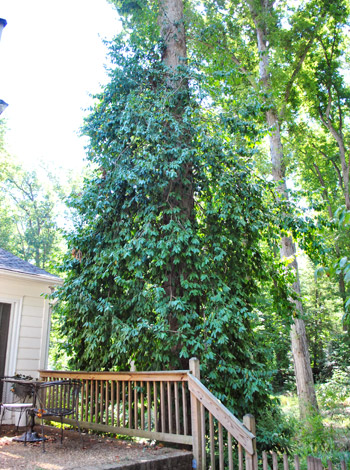 So yeah… it’s quite a list. But we knew from our first house‘s slooooow curb appeal makeover (we worked on that baby for 4.5 years) that these things take time. And to keep them from feeling too overwhelmed, it’s best to take it one day (and one project) at a time. So one of the first things on our list was to get some plants for around the house’s foundation. Because garden beds full of nothing but dirt (and the occasional weed) isn’t a good look. We actually purchased a Living Social deal for a local nursery last fall, so we had $80 to spend before it expired in three days (we spent $40 for the deal). So we ran over with a list of plants-that-will-hopefully-live from Katherine, and picked our favorites.

We had a hilarious conversation in the car. Well, it wasn’t funny until the drive home. But on the way there we were saying “I hope we have room for all the plants we’ll get with our $80! We had taken the stroller out of the trunk and everything, just to make room. Then we got there and realized that nearly all the bushes were $25-50 a pop. So yeah… we left with two bushes. And they easily fit in the car. And we snickered because we envisioned the car full of lush plants as far as the eye could see… but plants are expensive. Haha. Here’s what we came home with. It’s hard to tell the scale from this picture, but they’re each around two feet wide, which is nice. They’ll still grow a few feet larger over time, but sometimes when you buy the cheap tiny things it takes years for them to even get two feet wide. 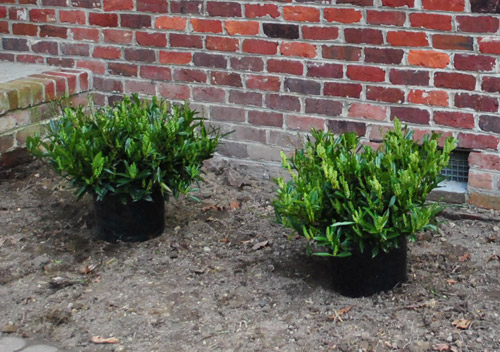 They’re otto luyken laurels, which came highly recommended by Katherine as a few of the bigger foundation shrubs we could add (she gave us info about how to space them and how far away from each other to plant them, etc). Thankfully these guys are guaranteed for a year, so if they give up the ghost we can get a credit towards something else. But we have no intention of letting them die (its been raining like crazy lately, which is hopefully helping them to settle in nicely).

As for where we planted them, we’re just starting on the garden beds to the left and the right of the porch (which clearly have a long way to go). So one got a nice roomy spot on the left… 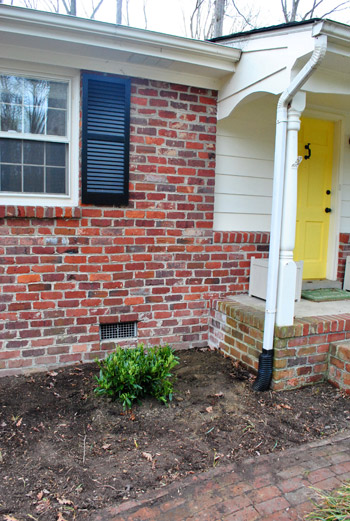 … and the other scored some prime real estate on the right. 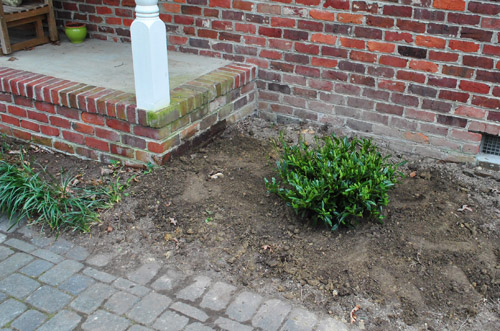 So when those garden beds come along a bit more (they each need at least five more plants) we’ll share all the before and after pics. We have a lot to clear out, including a big rectangle of bricks laid to create some sort of hose platform to the right of the bush above. Sounds like a sledgehammer job for Super $herdog. What are you guys doing outside these days? Any new plants or flowers going on?

Fab Freebie: Sharing The Love
What Up, Succa?