You already probably know that Sherry and I do our best to make green decisions around Casa Petersik, but we actually approach the whole eco-friendly issue from two different places. Which means that we don’t always see eye to eye on the lengths that we’ll go to be green.

Sherry’s interest in being green comes from a health & safety standpoint. That usually means limiting unnatural chemicals around our house, on our bodies, and in our food whenever possible. She’s the driving force behind things like filtering our water, gradually shifting into organic food, switching plastic tupperware for glass, cooking with Greenware instead of Teflon, and trading our personal care and cleaning products for their more natural alternatives (we use Tom’s of Maine, Dr. Bronner’s, and Mrs. Meyer’s to name a few).

I, on the other hand, come from a place of energy and waste conservation with my green ideas. Perhaps because my dad, a retiree from the U.S. Department of Energy, has been a big influence on me (which is why an elementary school project of mine featured solar panels and a family vacation once included a stop at a wind farm). So beyond being the nag about turning off lights when we leave a room or turning off the water while brushing, I’m also the reason that we have a rain barrel, a compost bin, and a dual-flush toilet here at Casa Petersik. 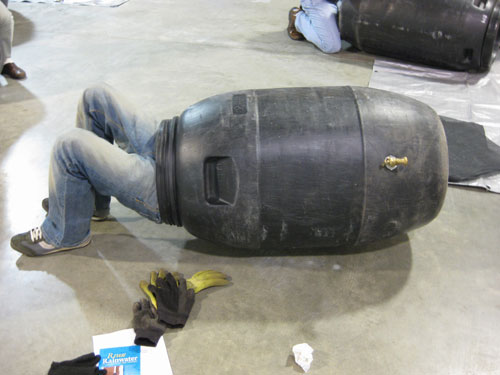 Of course neither approach is more or less valid than the other, because we both agree that each has merit (and together they have some pretty nice overlap). But it does cause some sticking points here and there. For instance, despite Sherry’s warnings, I’ve yet to go cold turkey on the “refuse those BPA-laced register receipts” tip because I just find myself being awkward with checkout people. And I’m awkward enough as it is. So after a bit of debate (and many promises of hand-washing on my end), she decided to go easy on me for this one. Gotta love my flexible and understanding lady-wife.

And if it were up to me, we’d have two more rain barrels in the front of our house too. But when Sherry delicately pointed out that the neighbors probably wouldn’t appreciate that aesthetic (and neither would she) I conceded that we didn’t need to line the entire perimeter of our home with giant plastic rain-catchers. If I lived in a dream world we’d also bike more of our errands – but alas, our narrow roads don’t make this very safe (or even very possible) so I’m glad Sherry tamed my inner risk taker on this one. 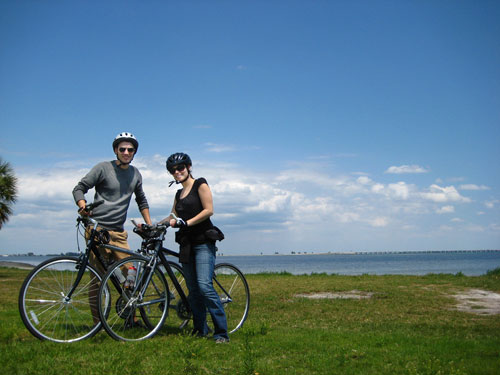 Clearly, being green around here involves a fair amount of compromise. Just like all aspects of marriage now that I think about it. The bottom line: I respect her reasoning, she respects mine, and we both do our best to be supportive of the other. So even if it’s not a decision that we’d make for ourselves, we’re happy to put in the effort for our other half if it makes them happy. For example, I’ve been willing to use natural deodorant, as long as Sherry’s been willing to put up with me smelling a bit less fresh after working in the yard. And she’s willing to walk our food scraps out to the compost bin even though the garbage can in the kitchen is a few hundred feet closer- just because composting puts a smile on my face. In the end we figure we’re better off having two sometimes-opposing viewpoints because it actually helps us to embrace more green practices in total. We like to think of it as some sort of wide-range eco approach – you know, like a venn diagram with two overlapping circles.

But enough about us. What goes on in your household? Does one of you push the green envelope more than the other? Or for differing reasons? Tell us all about it. And if you want to witness another couple coming to terms with being green together, we recommend a documentary that we watched called No Impact Man. Let’s just say it raises the be-green bar (and involves a husband telling his wife that she can’t use toilet paper). I don’t think Sherry and I are there yet… 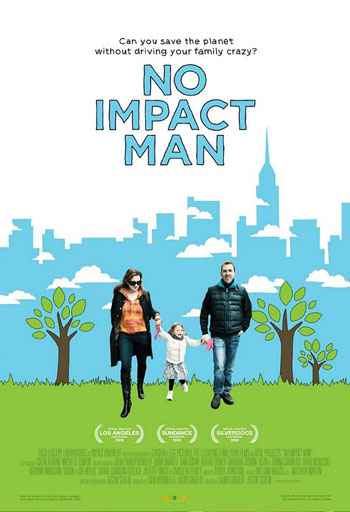 Reader Redesign: Brick Be Gone
How To Warm Up A White Kitchen (& Add Personality)