There’s a party in my pantry. And everyone’s invited. Although, it’s not really a party. And the pantry is far too small to host any sort of gathering. Hmmm. This invitation is going over just about as smoothly as Brick Tambland’s.

But back to the pantry. See it there, hiding in the back of the kitchen by the fridge? 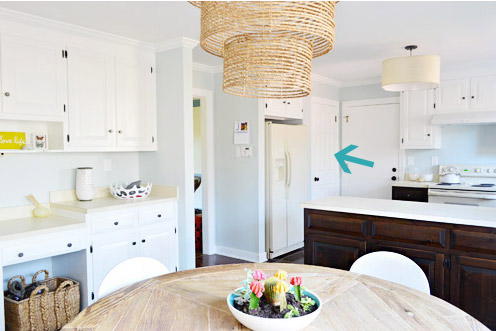 This is the only “before” I could find of it with the door open. By all the wallpaper and brown trim I could’ve sworn this was from before we moved in, but something about it being stocked with our mess of food tells me this is post-move. #sherlocking 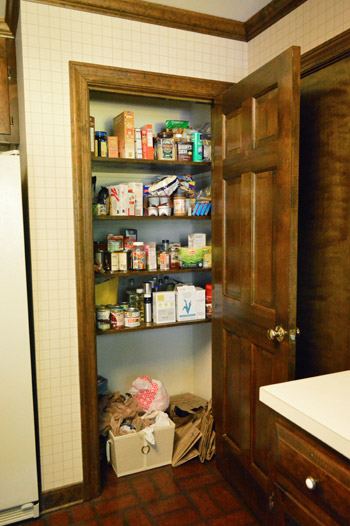 Regardless of when the photo was snapped, you can see that it was – how should I put it? – lacking in any sort of order and organization. Except for maybe the artfully jumbled pile of bags on the floor. I’ll wait while you pin it.

Our initial treatment of that space was not at all indicative of our excitement to finally have a legit pantry. In our first house we just stocked food in some upper cabinets, and in our last one we had a pretty intense pantry-cabinet contraption that was equally functional and frustrating. So having a standard pantry closet (like the ones we both had growing up) is a welcome change for us. 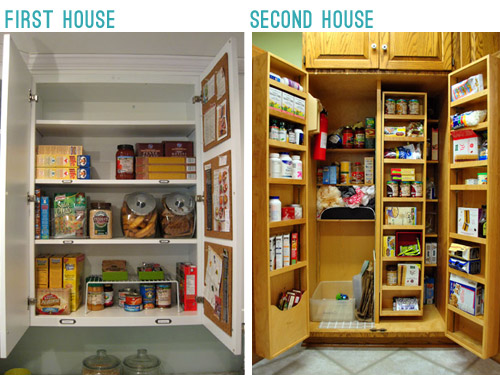 And thankfully, over the last eight months of living with it (and getting increasingly frustrated by our lack of function), we’ve come up with a few ideas to make it work a lot better for us. First off, we wanted to move our microwave in there. I know it’s not your usual placement for a microwave, but since removing our hulking over-the-range microwave, we wanted a better spot than on the counter – and we’ve had luck with a microwave that was hidden behind a cabinet door in our last kitchen (we don’t use it very often, and we really liked that setup). 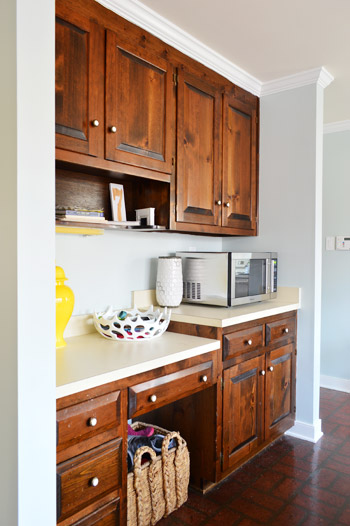 So because we had a good experience concealing our last microwave, relocating this one to our nice deep pantry felt like the way to go. There would be ample room for ventilation on the sides and back of it – and we’d keep the door open while it’s in use. The only hitch was that there was no outlet in the pantry. Until recently… 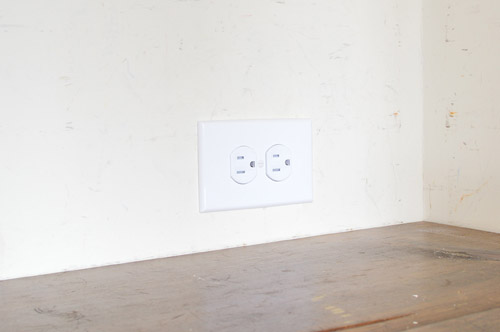 We actually got this done about a month or so ago (you may have noticed that the microwave has been MIA for a little while). Right before Christmas we had our go-to electricians swing by one morning and add an outlet right where we wanted it, to the tune of $110. And with that, the microwave had a spot to plug-in, our counter was clearer, and the pantry felt one step closer to being more functional for us. 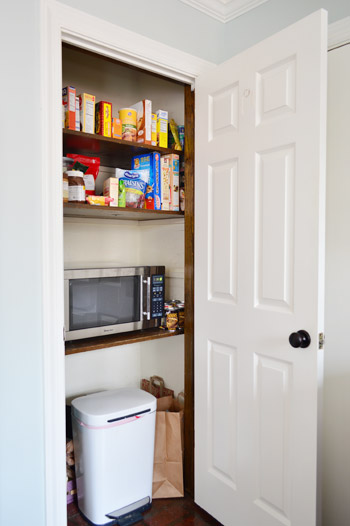 We’ve been using it that way for over a month now and it has worked out well. Except that to make room for the microwave, we had to lose one of the existing shelves. Simple solution: reposition the shelves to capitalize on that unused space. But sometimes the simplest solutions take weeks to make it to the top of our to-do list. 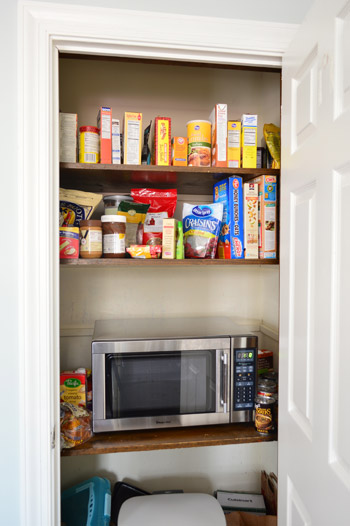 Yesterday we finally emptied the pantry (a fun task full of exciting discoveries like “I didn’t know we still had cookies back here!”) and went to work adjusting the shelves. Our original plan had been to lower the bottom shelf (with the microwave on it) so that the shelf above it could go back in the same spot. But we’ve since moved our trash can in there too, so we couldn’t go any lower without obstructing the can from opening.

Trash can sidenote: we moved that into the pantry over a month ago on a trial basis with the worry that it could stink up the whole space or otherwise annoy us, but sort of like how a trash can under the sink doesn’t seem to be an issue – especially when it has a lid to seal it – this one has been fine in there. Even with a pregnant wife who currently has a werewolf-like sense of smell.

Instead of lowering the microwave shelf to make room for another shelf above it, we opted to put the missing shelf back in above the microwave shelf. But by hanging that one a little higher, it would create sort of a half-shelf that’s perfect for cans and smaller pantry items. So I, very technically, used a pasta sauce jar to mark how much space we’d want. 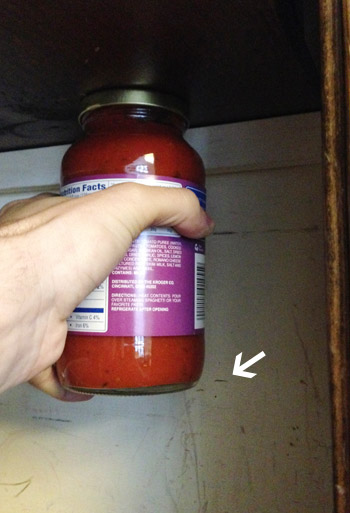 The next part was really easy. I used my crowbar to pry off the existing braces (which were just nailed in) and marked level lines where they needed to be re-installed. 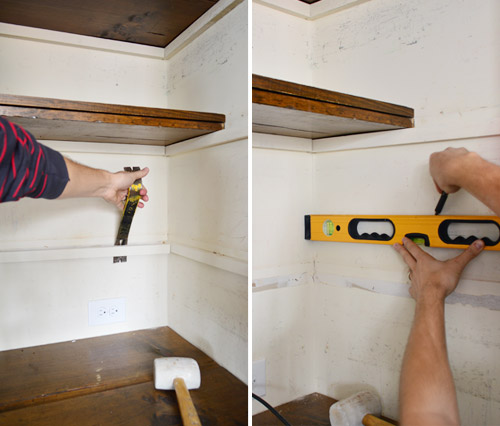 Then using my level to double-check myself, I screwed them back into place where we wanted them. 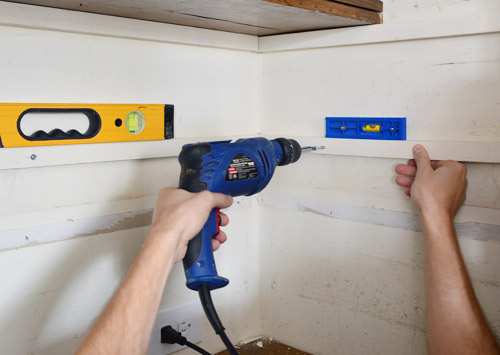 The whole thing took about an hour, and most of that was spent emptying the pantry, taking pictures for you guys, and eating back-of-the-pantry discoveries. Once it was completed we were inordinately excited to test out our new small-things shelf. It’s really nice to have a “bonus shelf” for those shorter items that used to get shoved to the back or clutter up the other shelves. 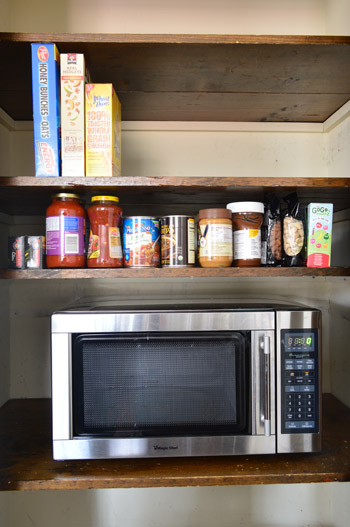 We didn’t bother to restock the whole pantry yet because (as you can probably tell) there’s still more to be done. Primarily: priming, painting, and further organizing those shelves. We’re planning to add a few more systems to keep things organized on those bigger shelves, and might even hang some added storage on the door. Sherry has also been thinking about using some cheery wipeable shelf paper or something, so this pantry party is best described as half-baked. 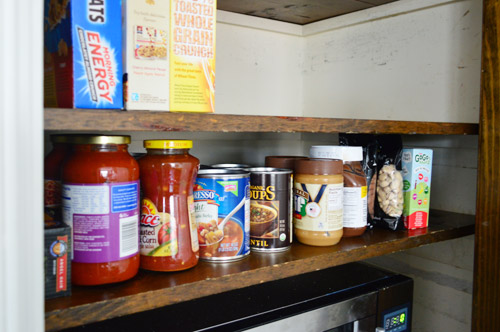 After we’re done painting and everything’s dry we can actually organize it so it looks a bit more appetizing and less like a grocery store mid-looting. And then we’ll be back with the end result. 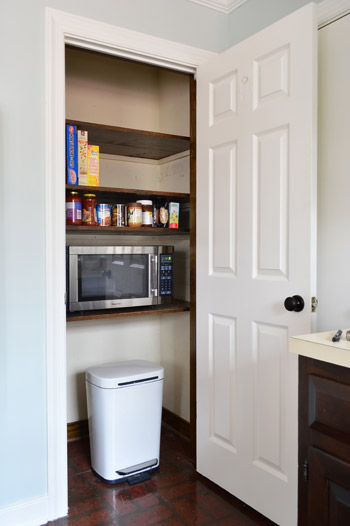 Man, it looks so nice empty and clean like that. Then again, the rest of the kitchen looks like this, so I guess it’s not really a long term solution. 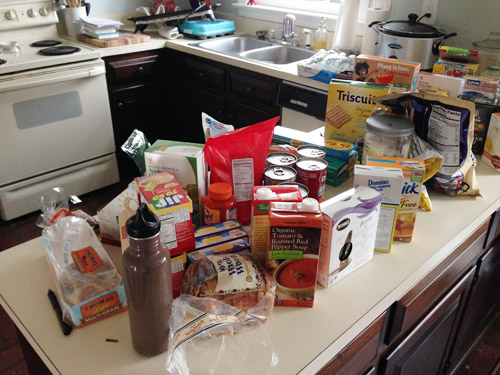 How do you guys have your pantry organized? Do you have certain bins and systems that you love? Have you drooled over those amazing room-like pantries on Pinterest? Sometimes I catch Sherry just gazing at them and muttering things like “magical unicorn pantry.”

Also, let me know if anyone is throwing a pantry party anytime soon. I’ll bring my friend Brick. He’s a hoot.