This week has already been pretty word-heavy with two big construction tutorials and a laundry saga, so we thought some lighter fare was in order – especially since a bunch of you have been asking if we made a family photo book again this year, and if so, when we’d share the details. Well, in the ever esteemed words of Madame Britney, “oops, we did it again.” In fact, the newest edition of the Petersik Family Yearbook landed on our doorstep this weekend. 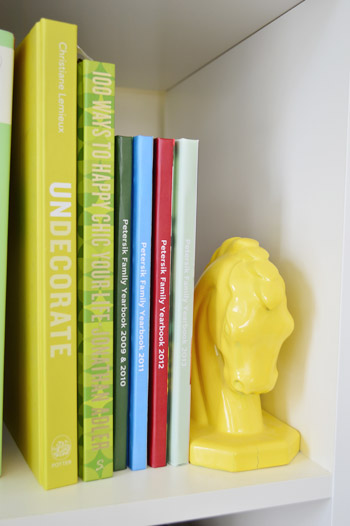 I have to say that we’re still so stunned at how thin-yet-picture-packed these books are. That picture above shows how five years of photos (over 2,400 of them!) can be stored in the same amount of space as one traditional photo album (which might hold 200 photos by comparison).

Here’s the cover that we chose for this year’s album: a somewhat goofy snapshot from our summer vacation to Florida. Yup, Sherry convinced me to go topless for this year’s cover (actually I think Clara’s happy grin sold us all on this photo). 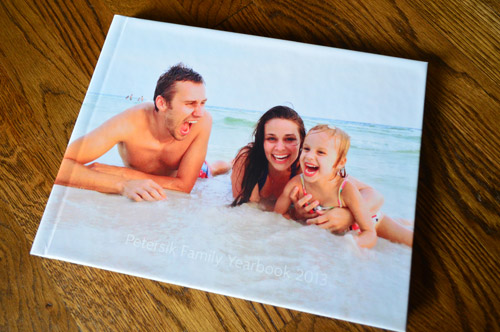 For those keeping track, this is now our fourth year of condensing 365-days’ worth of family photographs into one nicely bound volume that we buy from MyPublisher (here are the posts on our books from 2012, 2011 and 2009/10). This year’s picture is so light that the white title on the cover isn’t as visible from afar, but it’s easier to see in person when you’re holding it.

We followed our usual format and wrapped the spine and back in a color borrowed from the cover photo – so this year’s was a soft seafoam-ish green. 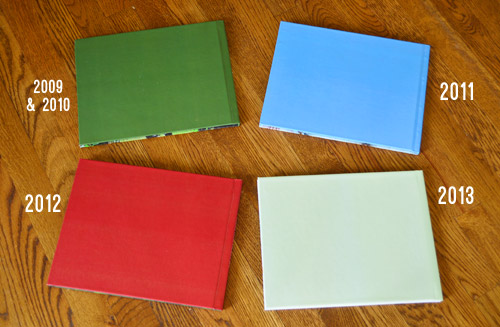 We always time our order to take advantage of MyPublisher’s “Free Extra Pages” discount, which cycles around every few weeks. It means that we can print a 99-page book without paying the surcharge they usually tack on for anything longer than 35 pages. You can see this year it saved us nearly $80. And while the final $48 price tag isn’t nothing, we’ve always felt that it’s comparable (if not better) than what we’d pay to order all of those prints along with buying a traditional photo album (or three) to stuff them into. 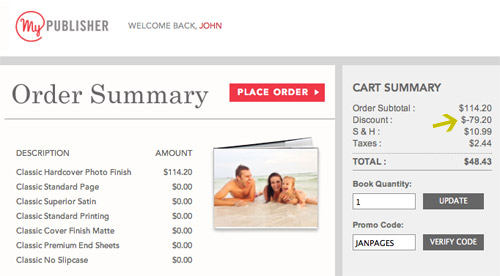 We also like the “insurance” of these photo books, since we have files for each book saved on our computer (so we could quickly get one reprinted if something happened to the original). Even if our entire house was destroyed, MyPublisher keeps files remotely on their end as well, so everything we’ve ever purchased (even dating back to that first 2009/2010 book) could easily be reordered.

But I promised this post would be less wordy, right? Can you tell we have trouble with that? Let’s just take a peek inside at some of the pages, starting with our summary page at the very beginning of the book. For anyone wondering, you can add type while creating your layout, so we just make two type columns, and fill them in with notable things that we did (in a general order of when they occurred). 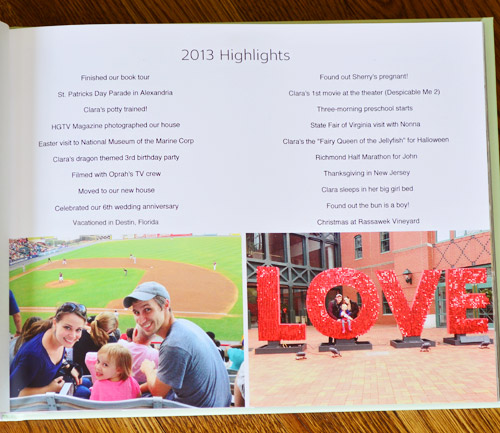 And here are some of our interior pages. We packed a lot of pictures into some of them, like this spread full of book tour adventures. 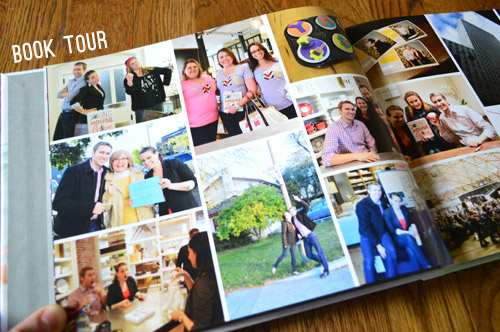 We also used some pages for comparisons, like this series of shots of Clara with Sherry’s mom and my parents, who all just happened to all be with us on her birthday for the last four years since her birth.

Some pages got bigger/fewer photos (like the right one below, which just has two of our favorite Clara-party pics). 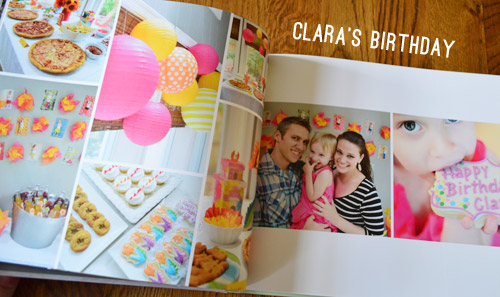 And we had fun looking back at other big events, like our move (we’re so glad we took those empty house photos before we locked that door for the last time). 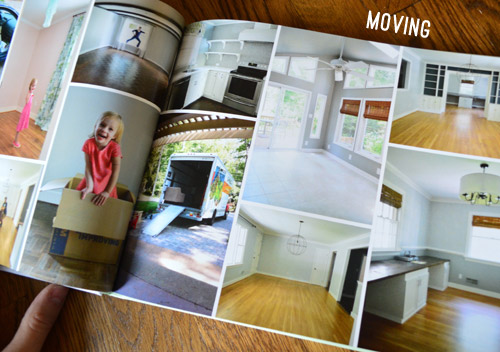 One change this year is that we tried to include more pictures of us doing projects (since that’s clearly a big part of our lives). In the past, our technique of backing up “blog photos” and “family photos” separately has meant a lot of the photos of us building/painting/de-wallpapering don’t end up in the family folder that we draw from to make our yearbook. So throughout this year we both tried to be better at plucking out certain blog pictures and making sure they also went into our family file. 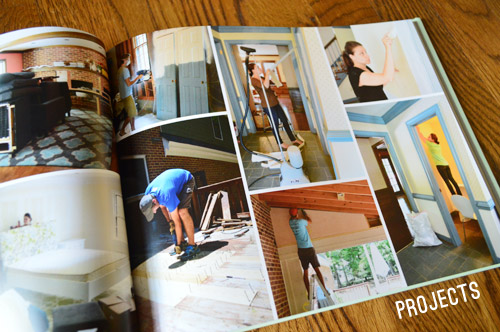 For those who wonder how we generally organize photos, we just use iPhoto. We have one album called Family 2013, and throughout the entire year we dump family photos in there, where it keeps them all nice and chronological. Then we go through and pick the ones we love most, import them into the MyPublisher software (it’s free to download) and layout the yearbook.

And of course, we couldn’t resist making a page that celebrates how much we’re looking forward to 2014 for an extra special reason… 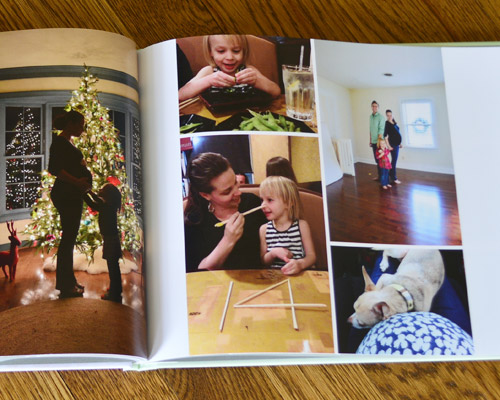 We also saved a dozen or so pages at the end of the book to make fun little grids of Instagram pictures. It’s not all of the IG pics we shared in 2013, just some of our favorites. There’s something about seeing them en masse at the end of the book that’s more exciting than sprinkling them throughout the album (they have a more casual and random feeling, so it’s cool to flip through them at the end, like some sort of relaxed wrap-up). 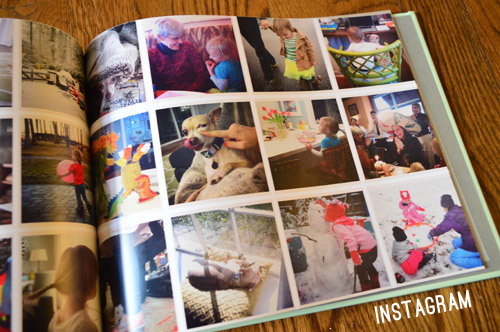 Since this is my fourth time assembling one of these, I’ve definitely honed my skills at pacing out my pages. In past years I’ve hit MyPublisher’s 100-page max before I even got to Halloween photos. But this time I even had a spare spread to put the last 12 photos from Clara’s monthly photo project. 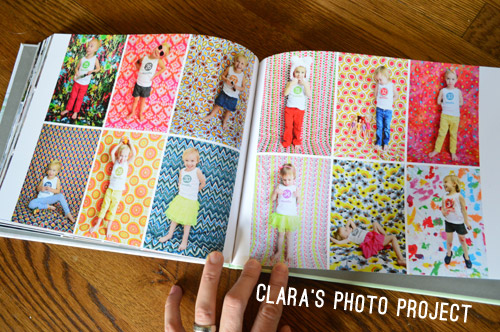 How are you guys memorializing 2013? Please tell me that we’re not the only ones running a little late with any end-of-the-year traditions. Are you newly on the bound-photobook bandwagon? Or are you committed to tried-and-true photo albums? Is there some new software or service we should check out?