Some of you have asked how Burger’s getting along in the new house. Short answer: great. Short answer with a fancy Mary-Poppins-ish twist: just splendidly.

It only took him a day or two to figure out where his food bowl now lives and which door to wait at when he needs to go out. Other than that, he seems to be having fun discovering (and re-discovering) his favorite spots to hang. Here are some shots from the last two months to document his love for the new casa.

This one was taken pretty much right after we moved in. He quickly identified this sun-warmed corner of the rug in the living room and loved to park his keister there every morning. 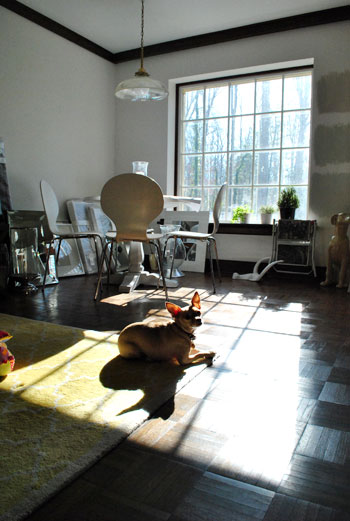 It was part of his very own GTL routine – growl, tan, lick myself. Yes, we watch Jersey Shore since it’s my wife’s home state. 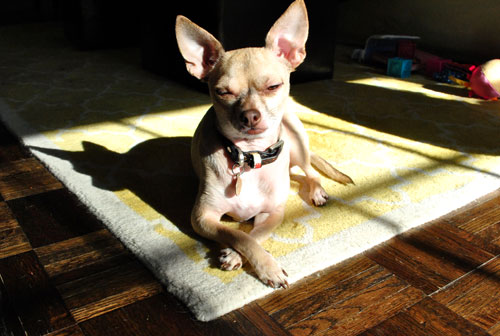 Though that routine has been interrupted by the introduction of Karl the sectional (since he blocks the sunspot), Burger has discovered a few new sun-drenched locations lately- including the windowsill itself. He’s such a cat sometimes. Here he is snuggled up in Clara’s hospital blanket (we brought it home for him to get used to her scent and now it’s his official “blankie”). 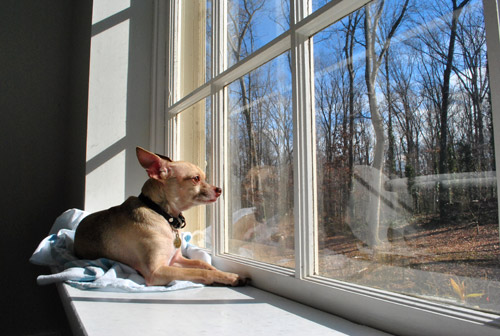 Sometimes he’ll move his relaxing into one of our laps, which really is a win-win for everyone on a cold morning. 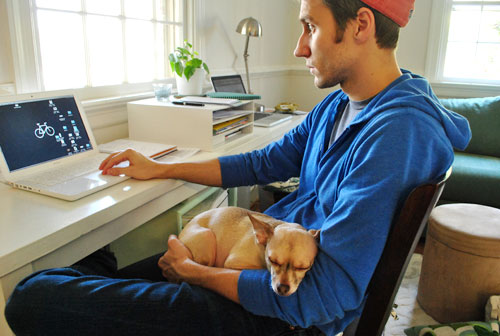 And occasionally he even helps supervise Clara during playtime. Although he tends to sleep on the job. Unless of course a noise is heard outside. Then all howl breaks loose. See what I did there? I replaced h-e-double-hockey-sticks with the word howl. Booyah. 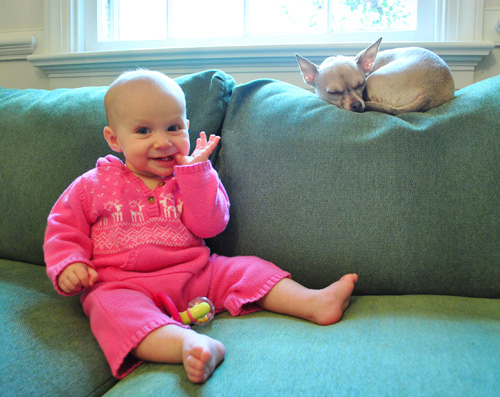 But when he’s not campaigning for the laziest chihuahua in the world title, he does his fair share of “quality control” – which basically means he helps us test out new purchases. Like our duvet: 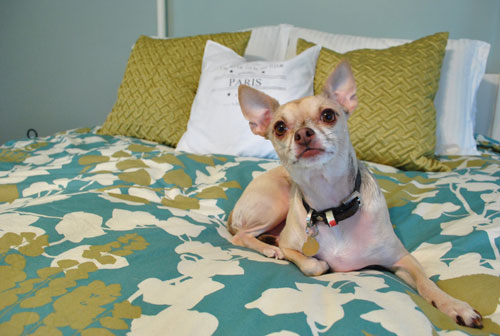 And our new sectional pillows (even before the sectional was here, we tossed them on the sleeper sofa in the office and Burger took them for a test ride): 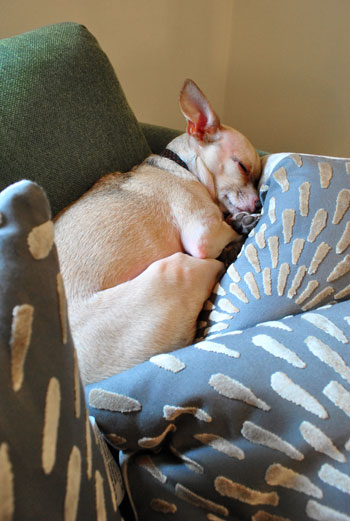 He also manages to squeeze in some playtime too, usually with his favorite toy: Divalectible. It was a gift (for Clara, actually) that Burger took an enthusiastic liking to. Don’t judge us for the name of this tiny stuffed chihuahua with a pink feather boa on it (Divalectible is actually its given “Beanie Baby name” and somehow it stuck). But feel free to judge Sherry for the weird noise that she makes during this video. I call it her “excited dolphin call.” She does it to get the dog to come a runnin’. Just not usually in public. Or on youtube.

Of course, it should come as no surprise that Burger continues to spend most of his days under the covers. So even though there’s a whole new house for him to explore, we’ve definitely got the same ol’ Burger on our hands. 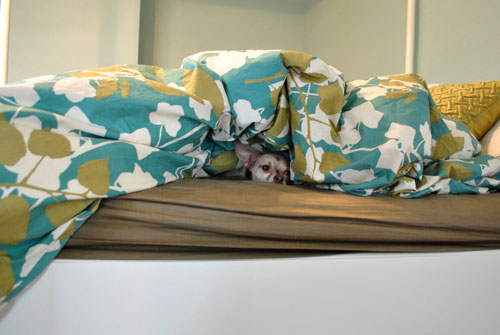 So that’s what our oldest kiddo has been up to when he’s not “supervising” as we paint or demo something around the house. Life’s good when you’re an eight pound chihuahua.

Psst- If all goes well we might just have another post today or tomorrow for ya. Let’s just say that we’ve finally started gaining guest bedroom momentum (with just 6 days until the inlaws arrive – yikes) so we’re most likely working away as you read this. And Burger’s probably supervising.