One thing we were excited about doing differently in this house vs. the last one is having a TV in our master bedroom. 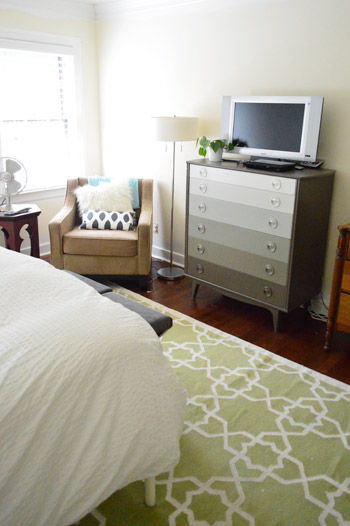 And while we did briefly have a TV in our last master, we never hooked it up to a DVD player or bothered to get a second cable box. Heck, I’m not sure it even got plugged in. 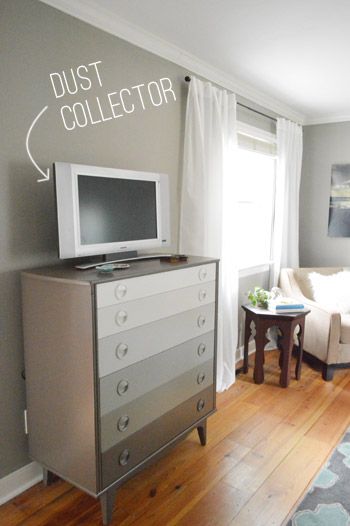 We’ve never been gung ho about having a bedroom TV (and we realize it can be a hot topic) but as two people who struggle to snap out of blog mode at night, we thought it would help fight the temptation to work on our laptops (which happens all the time downstairs on the sofa) if we were snuggled in bed instead. So we took the plunge and ordered two set top boxes for this house. One step closer to living the dream, y’all. 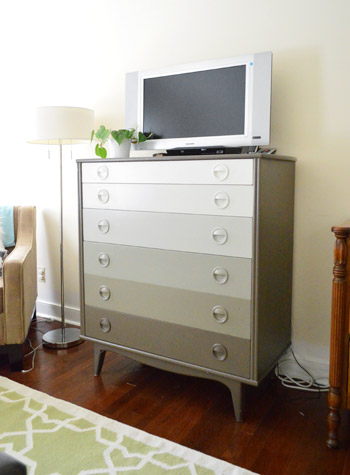 Except, once again, we didn’t get the bedroom one hooked up. In order for our alarm system to work, we needed a phone line which led to a pre-move installation of cable/phone/internet, but before moving in all of our furniture we weren’t sure where we wanted the Verizon guy to put the new cable jack in the wall upstairs. So he convinced me I could easily do it myself whenever I was ready and off he went, leaving me wondering if he was persuasive or just lazy. Either way, we had another non-working bedroom TV on our hands (well, until we hooked up the Blu-ray player for the occasional weekend movie). 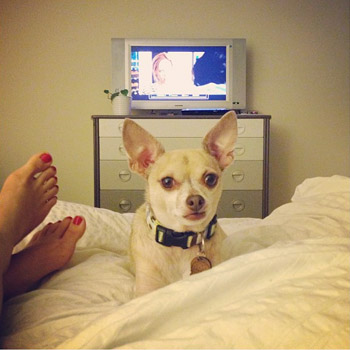 I’ve never done any sort of wiring through walls, so I was pretty unsure how this would all turn out. The basic goal being to snake a cable from an existing splitter in the attic, down through the wall and out a new hole in the bedroom. Between the basic instructions from the cable guy and a few YouTube videos I felt brave enough to start drilling a few holes in our attic. But first I had to figure out where. So I followed a visible electrical wire in the attic to help me pinpoint where the wall was amidst all that insulation (the wall I was looking for runs parallel to the joists). 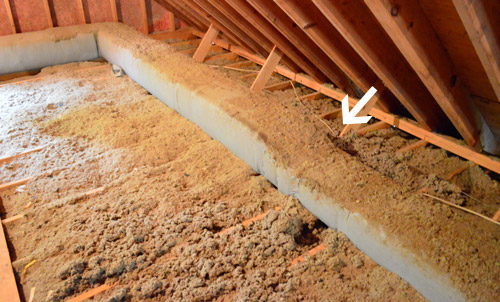 I also knew I was at the right place because (after some digging) I found the phone line that also connects to a jack in our bedroom. Seeing where both of these wires were threaded through the attic floor gave me confidence that I would be making a hole in the right piece of wood. 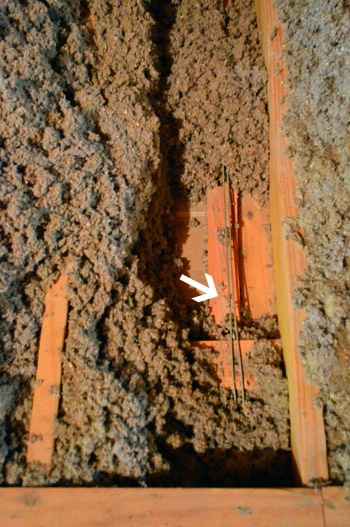 I was having trouble translating my measurements from the bedroom to the attic. For some reason I couldn’t wrap my head around adjusting for measuring against drywall in one space and an exposed rafter in another. So instead I used other fixed reference points to figure out where I should drill. For instance, I knew where the phone jack was in the bedroom and could see where its wire snaked through in the attic. So, here went nothing. 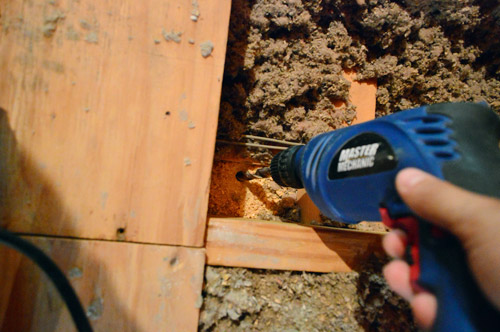 Meanwhile, in the bedroom I used a jab saw to make a small hole where I wanted my wire to come out. Crossing my fingers the whole time that this was more-or-less below the hole I’d just drilled overhead. 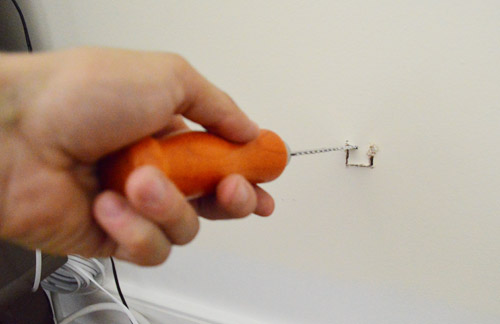 In order to connect my “dots,” I bought this set of glow rods from Home Depot. They’re basically flexible fiberglass poles (almost fishing rod-ish) that are stiff enough to poke through insulation, but bendable enough to snake around corners. Oh, and they glow in the dark since, well, it’s dark between your walls and glowing makes them easier to spot. 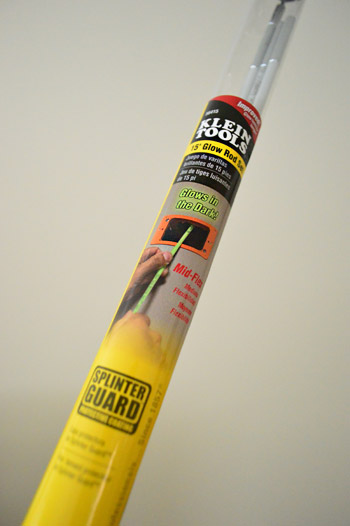 So here you can see me jabbing the long glow rod in through the top of the attic. It took a little bit of effort to jab it through the insulation in the wall, but it wasn’t long before I felt it hit the bottom. 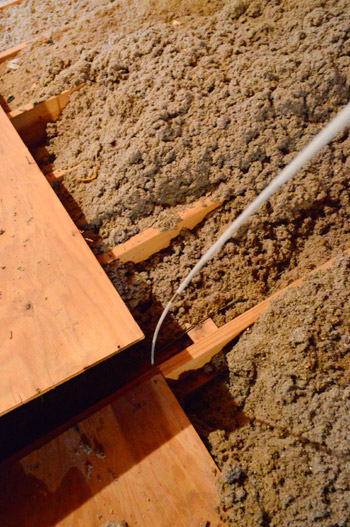 This is the part where I should have gone downstairs to see the rod glowing nicely through that hole in the drywall. Nope. Didn’t happen that way. My “measurements” were off enough that my holes were just barely on opposite sides of the same stud. Oops. So rather than create more drywall to be patched, I drilled a couple more holes upstairs in the attic… 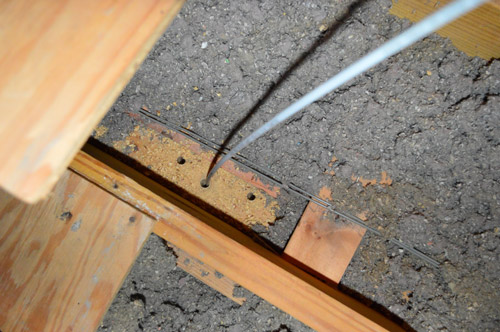 …til I found one that did this. It was a glorious moment, I’ll have you know. 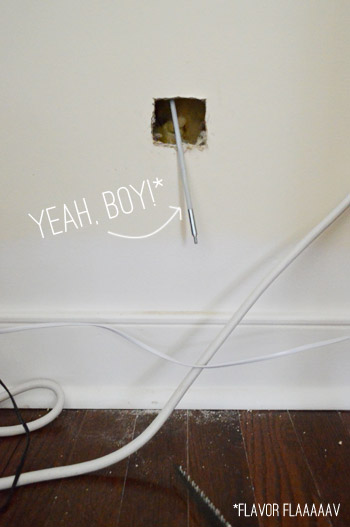 Of course in my haste to thread my glow rod through the wall, I forgot to actually attach the coaxial cable to it. Oops again. So I pulled it back out, taped the cable to it (I’m sure there’s a more professional way to do this) and snaked it back through to its destination. 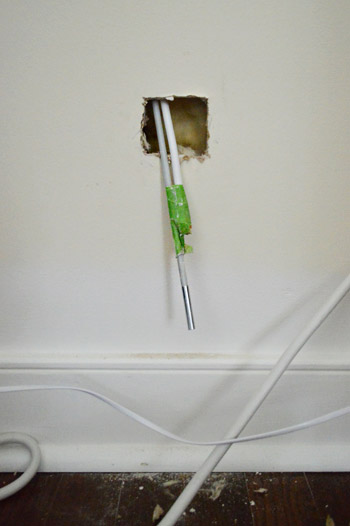 After untaping things, I pulled the glow rod all the way out leaving the cable ready to be attached in place. To do so, I used this simple wall plate that I picked up a Home Depot. The coaxial cable screwed into the backside just like it would connect to a cable box, and then I screwed the plate directly to the drywall. I figure there’s a more polished way of doing this, but this was already an upgrade from the cable-poking-up-through-a-random-floorboard that I’m used to (that’s been the setup in every home and apartment we’ve ever had). 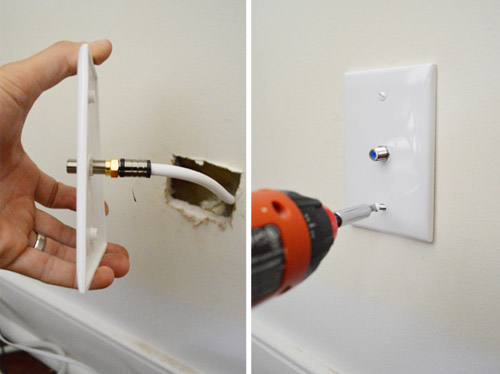 Oh, and of course I attached the other end of the cable to the splitter that was already in the attic. It had previously sent cable into the guest room for the previous owners, but I removed that hookup that popped up through the floor in there when we installed our new hardwood floors right before moving in. 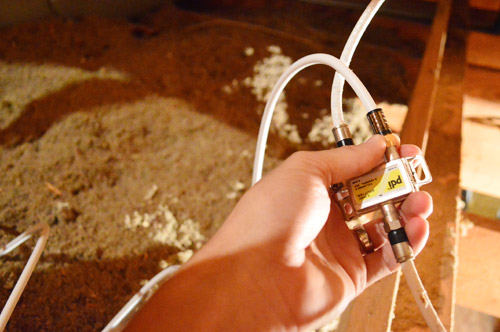 So in theory we were all set to watch cable in our room. Huzzah! But Verizon had other plans. I’ll spare you the details (it involved two trips to their store to swap out set top boxes while they struggled to get our system running due to a random glitch in our area). Instead, just enjoy these selfies I took whilst trying to capture how much I enjoyed talking to support for two hours on a beautiful Saturday afternoon. 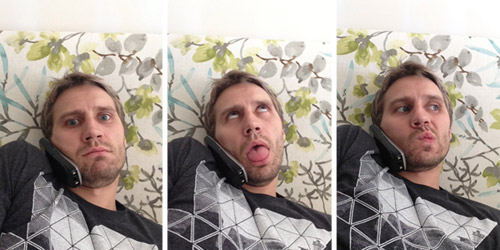 But eventually all was good in TV land. Especially the part where we got the multi-room DVR service working. Now things that we record on the downstairs TV can be watched upstairs. Is this what it feels like to be king? I think so. 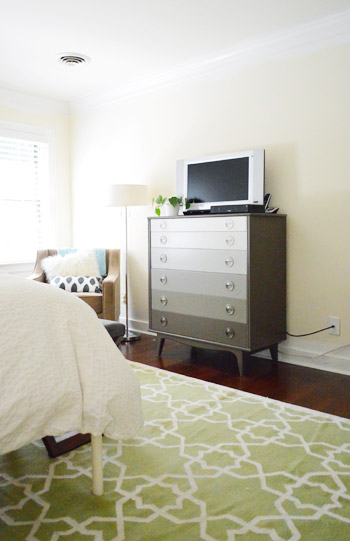 Oh, and yes I realize it seems funny to go through all of this trouble and still not have the jack hidden behind the dresser. But since we eventually plan to get a wider piece for this spot (this skinny one looks kinda weird on that big wall to us) we figured it made more sense to put the cable jack near with the other outlet on the wall. Why spread out your eyesores when you can concentrate them in one spot that will eventually be covered? 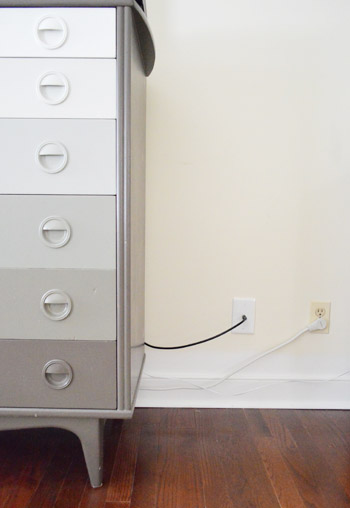 But I guess we could at least stand to get a white connector cable so it blends in a little more. Eh, maybe next weekend. For now I’m enjoying the fact that we dodged the $150 fee that Verizon charges for doing the job. All told, it was about $40 in materials and an hour or two of work (not counting those phone hours spent working out a random DVR glitch that was going on in our area) – but for my first foray into in-the-wall wiring work, I’d say it was a very satisfying project indeed.

Psst- We announced this week’s big Kohler giveaway winner, so click here and scroll down to the Rafflecopter box to see if it’s you.