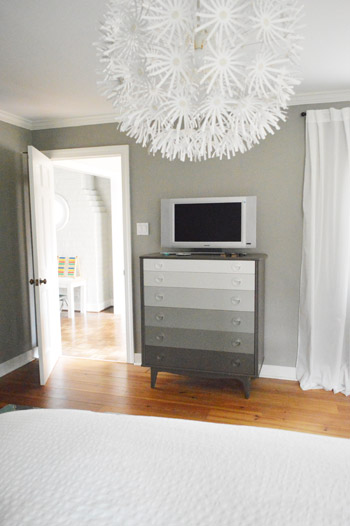 We were originally anti-TV-in-the-bedroom, so we know it’s not for everyone (and it’s downright sinful to some) but we only have one TV in our entire house – in the living room – and this guy was just sitting unused in the playroom (ever since we upsized the living room one since he wasn’t large enough to actually see from the sofa)… so we’ve gone and changed our minds. Haha. There’s actually a real reason behind the decision: more and more we’ve been thinking about how we have issues with work/life balance and it’s hard for us to “shut off.” Which is why we always end up working on the couch with our laptops and the TV on in the background. But a TV in the bedroom could become a no-work-and-no-multi-tasking spot – so we wouldn’t allow any laptops or work to take place in the room and we could actually concentrate on our favorite shows.

Just pure relaxation and zombie-apocalypse/Dexter viewing. What can I say, that’s our idea of a hot date. And I know there’s an old saying that a TV in the bedroom might keep you from… ahem… other activities. But we figure if things like caring for a toddler, renovating rooms, writing a book, and maintaining a blog don’t get in the way, that’s nothing a little TV in the bedroom could change. Aaand, now I’m blushing. Moving on. 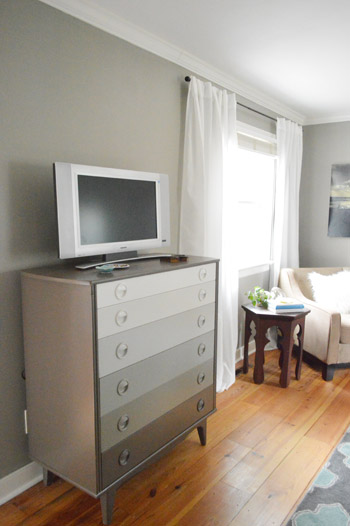 Not gonna lie, it sounds downright heavenly to wake up on a lazy Sunday and watch a movie in bed with the bean instead of sitting on the sofa and immediately snapping into “we should be working” mode and grabbing our laptops.

And let’s just say a wall with a dresser and a TV are straight up spa-like when compared to this ridiculously cluttered before: 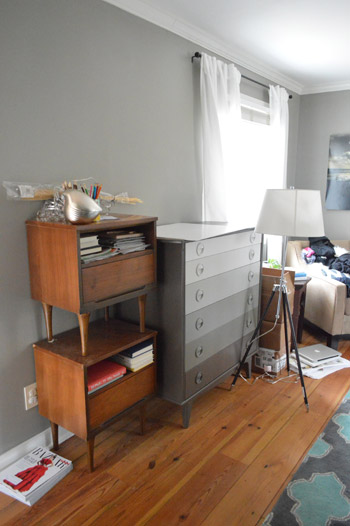 So I returned from all of our tour flights with a fire burning under my buns to whip the wall that we stare at every. single. night. into shape. The first step was just putting things where they actually belonged (books we had read went under the built-ins in the dining room with the rest of our collection, empty boxes got broken down and stashed in our recycling bin, the lamp moved back to where it should be, etc). 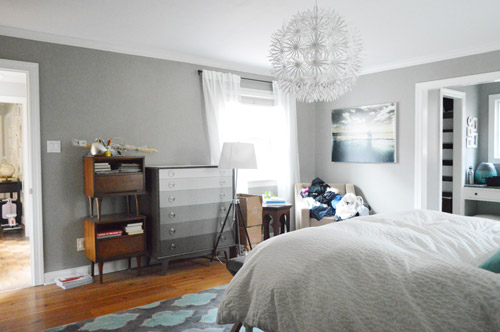 Then I moved our mid-century side tables (remember we phased them out here?) into the guest room. Now that we yard-saled the old dresser that was in there we have a completely bare wall – and two of them next to each other actually look like a console against it. I owe you guys a picture, but it definitely works for now. We don’t know if we’ll eventually use them in Clara’s big girl room, so we’ll have to keep you posted. 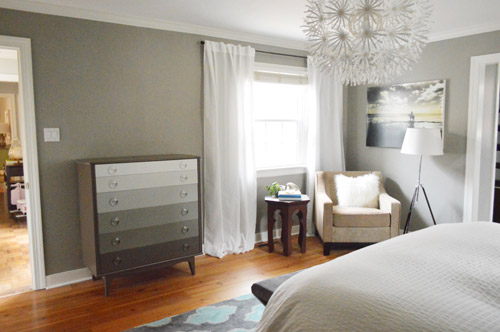 Anyway, once those were out of the way we could properly center the dresser (which was one of the only secret book projects that we paid for and kept since we were so in love with it – you might recognize it from this video). It sits directly across from our bed – for our prime viewing pleasure – and then we just plopped the old too-small leftover living room TV on the top. 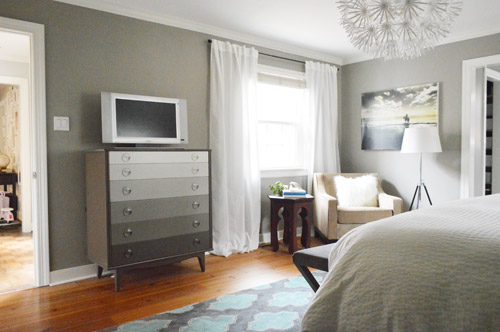 So far, it totally works for us. Wait, except not literally. It’s not actually hooked up to cable or anything yet, so… womp-womp. Nothing to watch. Maybe I’ll “dude, get on that” in a week or two (returning from tour stuff + Thanksgiving week = too much going on to sit on hold with Verizon). Perhaps I’ll have the patience next week?

Oh and I’ve heard that it’s bad feng shui to sleep across from a TV or a mirror, but we actually slept facing a giant floor length mirror for a few years at our first house and didn’t have issues sleeping or anything like that- thank goodness. So maybe we’re immune? Haha. 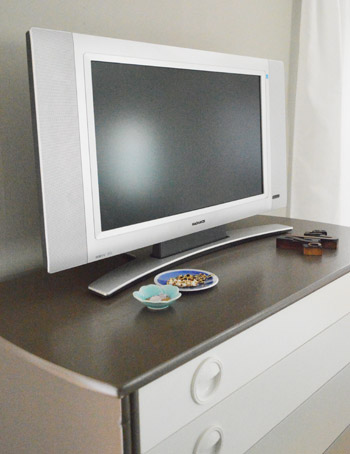 Honestly, my favorite thing about the dresser actually being centered and cleared of clutter is that I get to put cute little jewelry dishes up there (which tie into the color of the rug, you know, because I’m coo-coo-for-stuff-like-that). 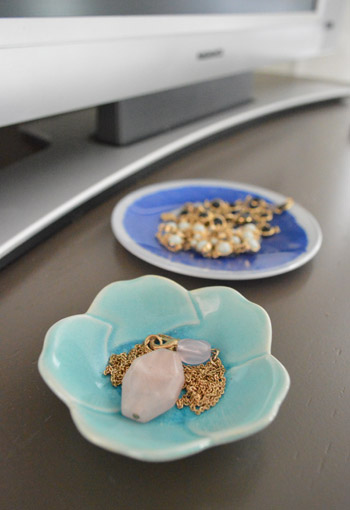 Also hanging out up there: wood blocks in our initials and our favorite number. Oh yeah, this stuff makes my day, guys. #noshameinmygame 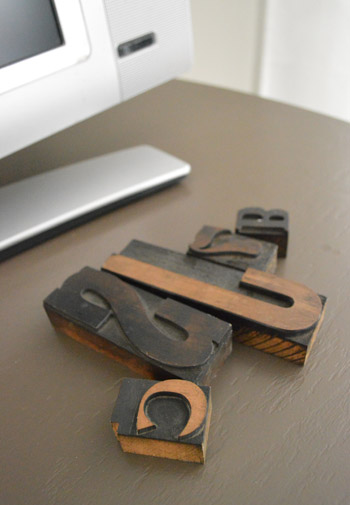 So that’s where we are. Slowly inching towards a bedroom that looks less blank-wall-here, cluttered-junky-wall-there. We’ll let you guys know how the whole TV thing goes once it’s up and running. Who knows, we might end up never using it, hating it and removing it, or pretty much deciding we should never leave our room! Mostly I’m just excited that we can share photos of one of our favorite book projects on the blog. Yeehaw. 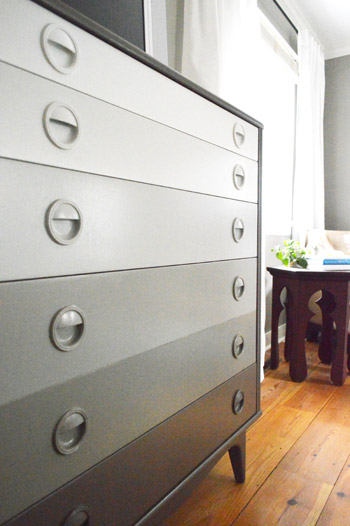 Do you guys have TV’s in the bedroom? I’m dying to know the breakdown (is it 50/50? way more than not? very rare indeed?) but the last time we embedded a poll it crashed our site, so we’ve cobbled this tiny poll together over on Facebook so if you feel like playing along or checking out the tally, click here. Can’t wait to hear where you guys land!

Psst- Have you guys seen baby Weston yet? It was so exciting getting the call in the middle of the night that he came into the world safely and all was well with Katie and the fam. Clara loves him already – and after I showed her a picture in the morning she lovingly said “I want to bother him.” Cute, right?