1. A few months before starting this blog we had never painted brick, ripped up a carpet, upholstered a chair, made a headboard, caulked anything, changed out hardware or done pretty much any of the other tutorials we’ve since figured out and shared on our How To page (we’re true believers in learning as you go).

2. Our license plate says “Burgrr” (custom plates are only $10 here so we couldn’t resist). 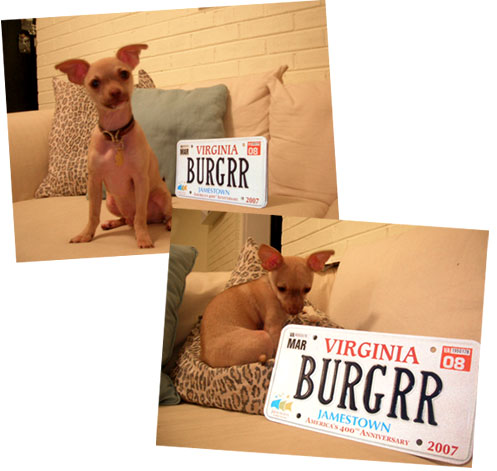 3. John’s middle name is Freeman in honor of his grandfather (his first name honors his other grandfather named John).

4. My first name is actually not Sherry, it’s Sherry-Beth (my mom thinks it flows like Elizabeth, but it doesn’t- in fact it pretty much ruined my life growing up so I quickly adopted Sherry to avoid the Bobby-Joe-Becky-Sue country bumpkin comparison).

5. The irony of my good ol’ girl name is that my mom’s side of the family is extremely Italian (for example, her name is Diana Teresa DeCesare LaPadula and I have an Uncle Vito, a Grandpa Carmen, and a Cousin Dominick) so the odd country/southern reference in my name is totally out of left field (and my brothers and cousins got totally normal monikers: Daniel, David, Adam, Tim, Jennifer).

6. John kissed me first (anyone who knows us is blown away by this because he’s generally the shy one and I’m the loud crazy one). 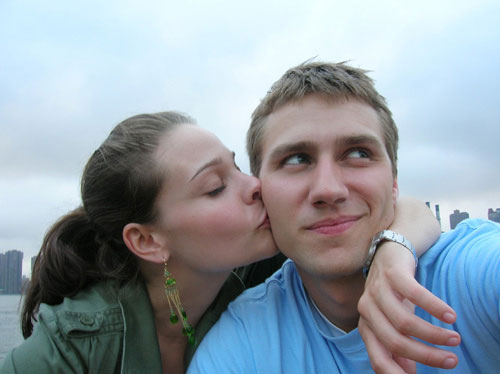 7. John used to do improv comedy in college and in NYC after he graduated but opted out of that lifestyle after he realized he liked to sleep at night and be awake during the day (thank goodness or I never would have met him working in advertising). Many of his improv acquaintances have gone on to be super famous (he knew Kenneth from 30Rock and a girl named Jenny Slate who’s on SNL this season).

8. I had a tumor in my airway (between my nose and my throat) in middle school. Can you imagine how many times I had to hear “it’s not a tumor”? Thankfully it was benign and two surgeries later I was as good as new. I also had teeth that grew in near the back of my throat and had to be slowly pulled to the front of my mouth through a series of torturous wire tightening exercises (but in hindsight, having a normal smile is totally worth the effort). I always ask my mother what the heck she ate when I was in the womb but she has yet to tell me.

9. John doesn’t drink. Not a drop. He never has, which almost everyone at work quickly learned after a few happy hours with him (he was still the life of the party, just never the one we had to put in a cab at the end of the night). His unwavering willpower and amazing ability never to be “that drunk guy” made him incredibly intriguing and appealing to me… and still has me hooked to this day. Update: We’re not Mormons – which is actually a pretty popular “internet rumor” about us – haha! More on that here.

10. John and I tried out for the Amazing Race back when we were friends right on the cusp of dating (our hook was that the race would either ruin any shot at a relationship or bring us together). We didn’t even get a call back, which I now realize is a good thing as my terrible sense of direction and loud mouth would probably have made us a pretty lame team. I still think John could win the entire thing with a better partner though. He’s great at reading maps, having a strong sense of direction and running (three things I don’t do).

So that was a fun little Friday departure. What about you guys? Any strange facts that will blow us away about you, our lovely readers? Anything that we revealed above that totally surprises you? Number 1? Number 9? Number 10? Do tell.