Sometimes when we mention some random side-note-y thing, that little aside surprises us by becoming the thing people want to know about more than anything else we’ve said. Take this cheeseball picture that we posted after John’s third triathlon almost two months ago on Instagram and Facebook, with the caption: “Third triathlon complete for this beast (and yes, we make Christmas ornaments for our tree from his medals, because we are nerds).” 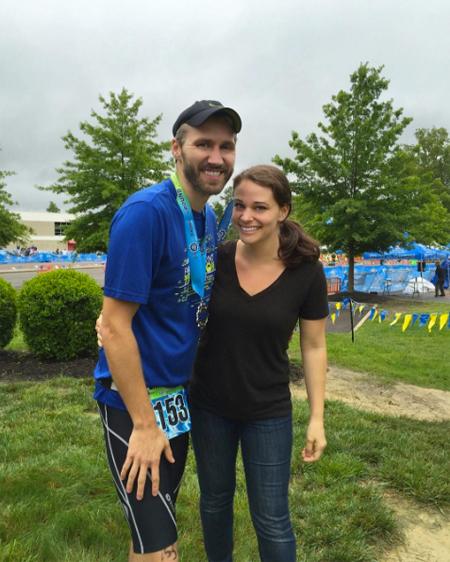 Well, we were completely surprised by how many of you guys commented about that little ornament tidbit and asked for instructions/photos/a blog post. So I’m here a mere two months later with the didn’t-ever-think-you’d-be-interested-but-I’m-game-if-you-are goods. There’s nothing like a little Christmas tutorial in July, eh?

The good news is that it’s so simple and quick that you can even do it while intently watching the Bachelorette and trying to tell the guys apart (ARE ROBBY AND CHASE THE SAME PERSON? I’M SO CONFUSED). 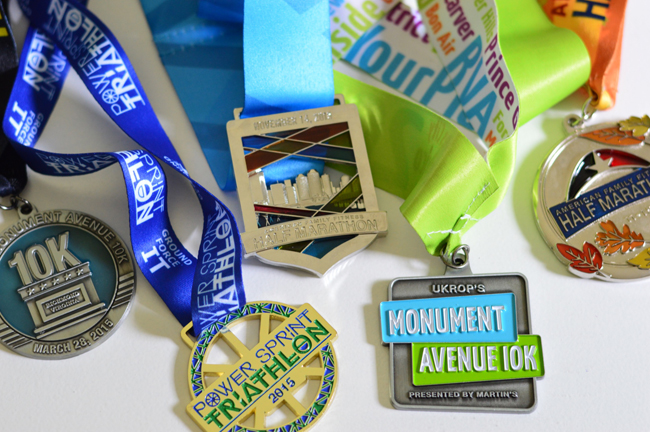 We first got the idea when John did a “Tacky Light Run” a few Christmases ago. They’re fun night runs in a nearby neighborhood that goes INSANE with holiday decorating, and the medals they give out at the end basically look like ornaments. Although they come on the same thick ribbons that you see in the photo above, it was enough to plant the “hey, we should hang this puppy on our tree!” idea. And it was only a matter of time before it trickled over into the rest of John’s medal stash. 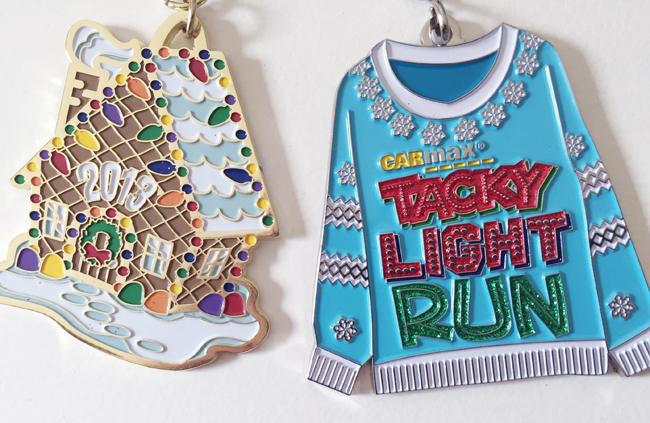 So here are the suuuuuuuper complicated steps:

Step 1: Gather all of the medals and double check with the person who won them that they don’t mind you altering them. John is a-ok with the conversion since otherwise they’d just live in a box in the back of the closet.

Step 2: Cut the ribbon that’s threaded through the medal, freeing it up for some thinner ribbon that you’ve purchased (or hoarded from decades of Christmas present unwrapping like I have). 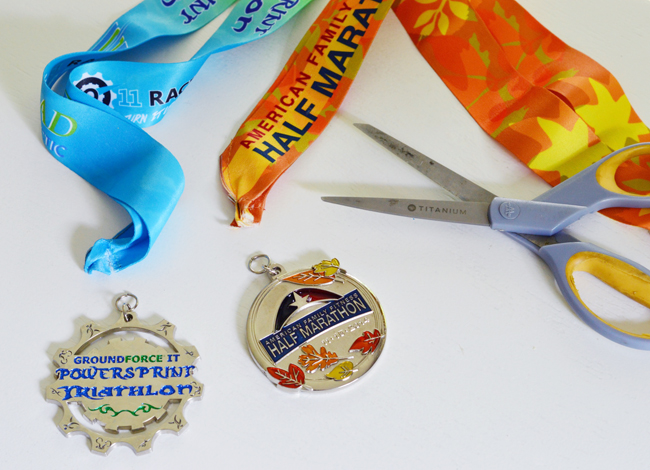 Step 3: Cut a short strip of your hoarded/purchased ribbon (we make ours about 7″ long), loop it through the medal where the old ribbon had been, and secure it with a nice tight double knot. 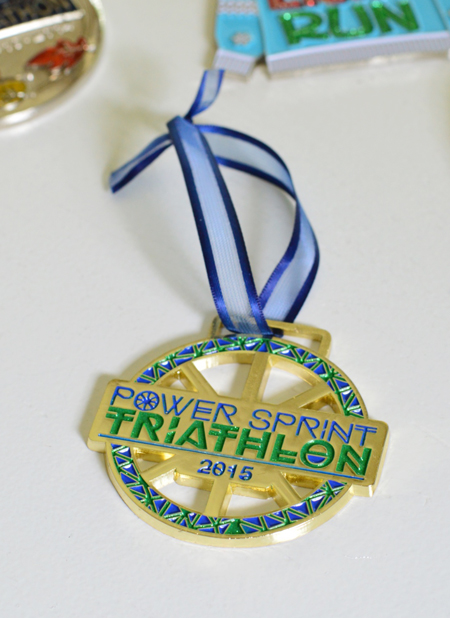 Step 4: Admire your creations. Consider calling yourself some name that sounds like the long lost cousin of a super crafty person (Bertha Stewart is a personal favorite of mine).

Step 5 (optional): Walk around outside until you encounter a pine tree that resembles a Christmas tree because it’s summer and you’re not about to set up your artificial tree for an impromptu ornament photoshoot. Wink at your neighbors knowingly (who hasn’t hung ornaments outside in the summer with their good camera on hand, amiright?). 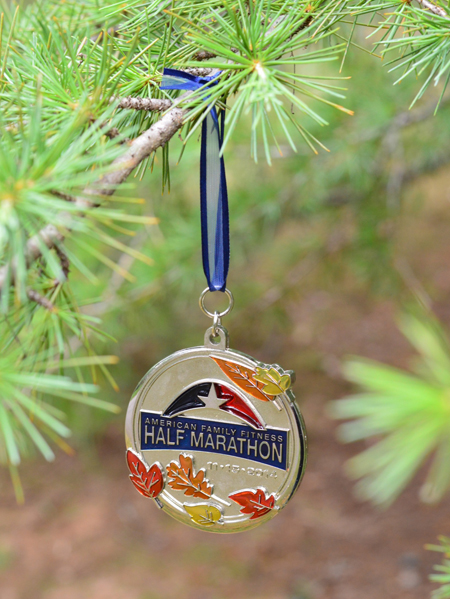 Bonus option: If a metal ornament hook is more your speed, you can just loop one through the hoop on your medal (this can be accomplished faster than I can eat an 8-count of chicken nuggets, which only takes me like 2.5 seconds). Pottery Barn and craft stores like JoAnn usually sell hooks that are slightly thicker than the cheap paper-clip-looking options, which I actually got suckered into buying a few years back from PB. In their defense, they’re pretty cute, and I’m 87% sure they were worth the $9 I spent on them. 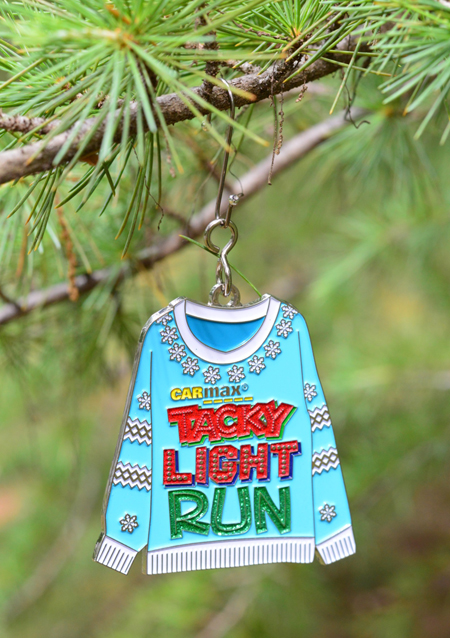 So that’s it. Easy, right? I have a few athletic friends who could fill an entire tree with medals. Heck, I could do it too if speed chicken nugget eating was worthy of a medal. #dreambig

Psst- We’re no strangers to ornament tutorials around these parts, so here’s one about making them from wood slices, here’s another about glittered & feathered glass ones (woof, those old pics from 2008…), and here’s one about how we whipped up 38 different homemade ornaments for our tabletop tree. Oh and if you haven’t tuned into our latest podcast episode with Tiffani Thiessen (she was so nice & even played a little “Saved By The Paint Colors” game with us), you can find more info & learn “how to do podcasts” here.

#6: Oh Nothing, Just Talking To Tiffani Thiessen
#7: What Your Home Should Look Like When You’re 30