Remember back when we debated painting the siding on the front porch way back here in fall 2011? Hence the creepy Halloween wreath on the door. 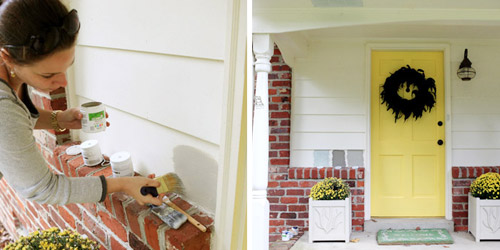 We had picked a color and everything (Flagstone by Martha Stewart – the one on the right in the photo above) but before we got around to doing it, the temperatures dropped too much to paint. Then the test swatches – which lived on our porch for several months (sorry neighbors) got painted over when it was time to shoot book photos out there. The project literally became out of sight, and out of mind. 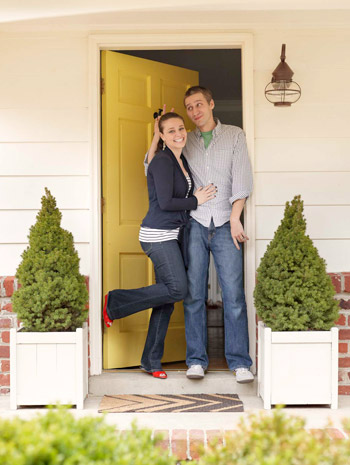 Then we redid the columns. And when we did a few of you guys were all “wait, weren’t you going to paint the siding out there? what happened?” and we were all “oops, yeah, that never happened.” And then we added the pergola and a few window boxes and our paint-that-siding hankering returned. Initially we worried that painting just the porch siding would be weird without doing all the other siding on the side/back, but after rethinking it we decided it would be fine since the cream color of the other siding is still in the porch trim, so it all ties in.

So although you could literally describe us as being on the fence about this project since 2011, in the end we just didn’t want to leave without going for it. Especially because we thought the trim, columns, and that happy yellow door would pop a lot more from the street. And let’s face it, we’re going to be doing a lot of drive bys just to wave at her once she’s not ours anymore. #totallynormal 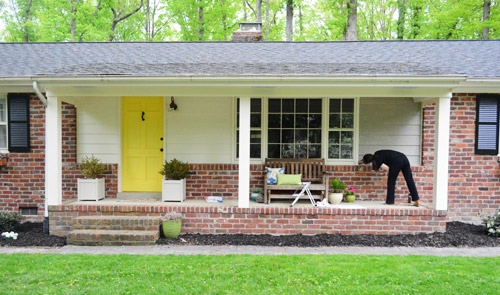 So out came the paintbrush and roller. We had already bought the paint way back when we settled on the color in 2011 (Flagstone by Martha Stewart) so we didn’t need to spend any more loot to make this happen. Update: this is hardboard siding, which is like a wood composite material, so this method might not work on aluminum or vinyl siding. 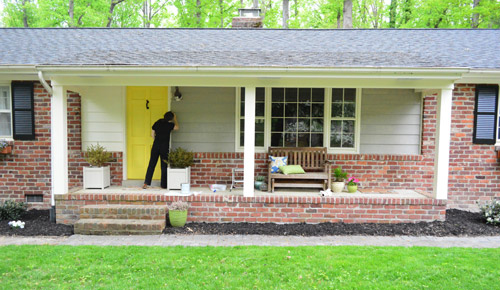 And believe it or not, we whipped out the entire job (two coats!) during a Clara nap on the same day that we hung the window boxes (we were like little front yard tornadoes running around). 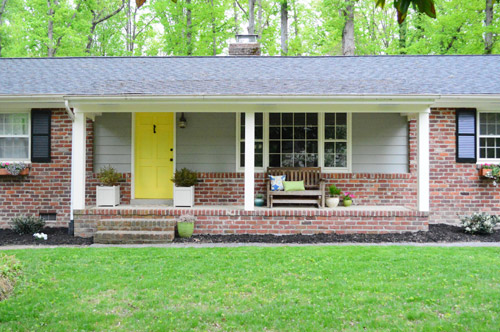 And since the color ties in so well with the mortar in the brick (it’s nearly the same color up close) it’s a nice seamless addition. It helps the door and the trim and the columns feel a bit less flat from the curb, yet it doesn’t make the other cream siding stand out like a sore thumb since that relates to the rest of the trim.

The biggest difference that we notice in person is that the house feels less choppy since that big cream rectangle was a lot more broken up looking than the not-as-light new color. See how the before picture below looks like a house made of a brick box next to a white box next to another brick box and the after picture looks a lot more like one facade instead of three blocks sitting next to each other? 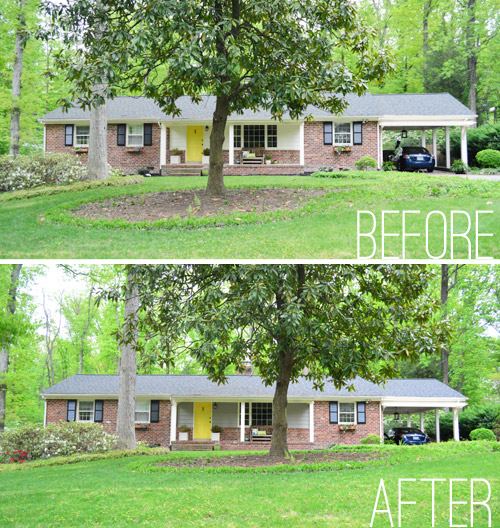 Best of all the yellow door is one heckova happy guy now that he’s next to a slightly deeper tone than that former sea of cream. 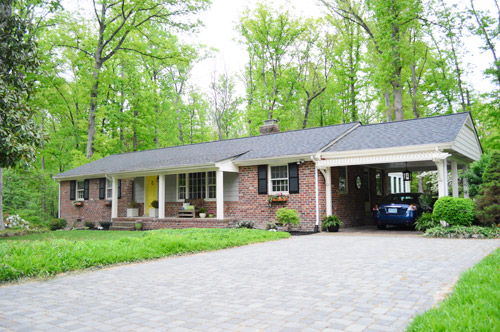 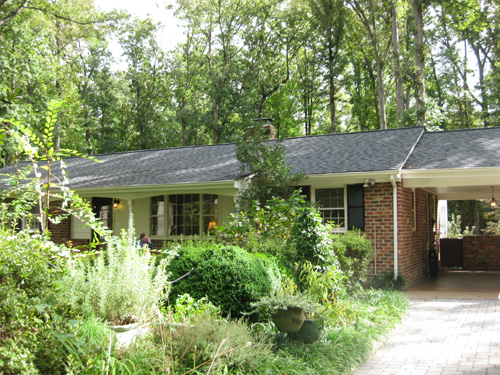 Anyone else painting siding? How did you tackle it? We just used a small foam roller and a brush (John used the roller to get along each length of siding and I used the brush to get into the groves and cut in around the edges). We were both shocked how quickly we got those two coats knocked out.

Reader Redesign: Bring Your Tuxedo
How We Sold Our Second House By Owner