Duuude. We painted our house. Clarification: we painted a few tiny test swatches. The creamy color wasn’t exactly hurting our eyes, but there are a few gorgeous homes in our neighborhood with gray hardboard siding + brick and we love the look, so we decided to give a few swatches a try. Having such a light creamy color on the hardboard siding (it’s solid wood) and all of the trim isn’t doing the trim any favors (it’s not popping at all since it’s all the same color). And the pairing of the light cream with the darker richer brick is sort of jarring – like it’s two houses. So we thought by going with a more mid-toned color (but not reddy-brown since that would be too much of a brick thing) it might feel more cohesive. Like one unified house instead of a brick house with a big cream box in the middle.

First we held up around 25 swatches and picked three that we thought looked the best next to the brick (which has some pretty great gray undertones – especially in the mortar). Then we got three two dolla (holla!) paint pots from Lowe’s and made three test squares (right above the brick part of the house so we can see how things look when they touch). Note: why yes I did wear my shirt inside out when painting them, thankyouverymuch. 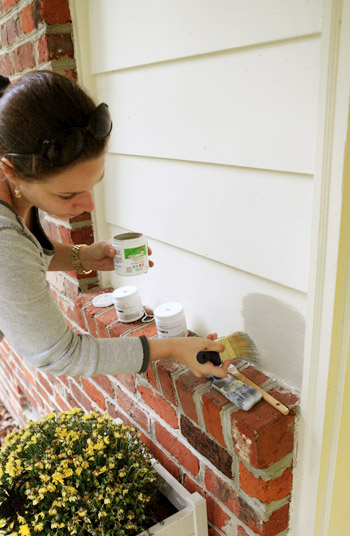 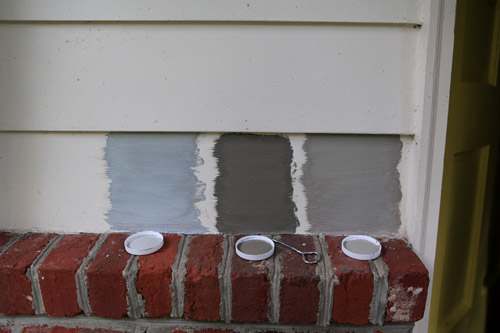 The guy on the right. You can see from the photo above that it’s a warm taupey gray. So it shares a lot of undertones with the brick. We feel especially confident about how compatible it’ll be since it’s nearly the same color as the mortar. 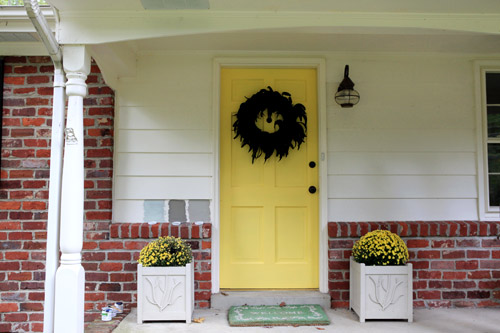 It’s Flagstone by Martha Stewart, which we’ll get color matched to some sort of high quality exterior paint – hopefully with some built-in primer (more deets on that when we actually pick up the paint and pin down what brand/type it’ll be). As for the one in the middle, that’s Mushroom by Martha (which we thought was too dark), and the one on the left is Bedford Gray also by Martha (which we thought was too icy and blue).

Of course the photos aren’t the same as the real life effect, but we love the guy on the right because it’s not too icy/cool/light and it’s not too dark. Don’t get us wrong – we love a dark house (with white trim that pops = amazing) but we thought a mid-tone would look best with our black roof, existing brick, yellow door, and the bright white trim that we’ll be adding (black roof + dark gray house = too dark for our little ranch). So we hope our pick is a nice balance of not-too-dark-and-not-too-light (the roof can be the dark element and the white trim can be the light one). Here’s a poorly photoshopped version of the last pic to give you an idea of where we’re hopefully headed: 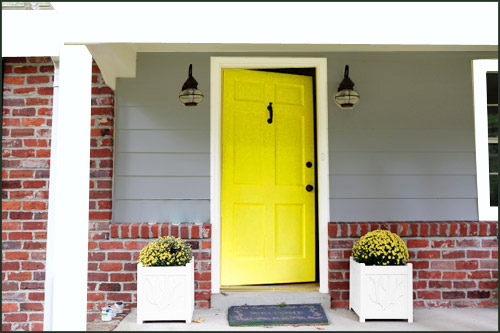 Speaking of the to-be-white trim, it’s actually really out of order of us to test paint on the house because we still need to demo out the scallops on the porch and paint the trim (painting the hardboard and then demoing the scallops could lead to some paint damage that we’d then have to retouch). So although we’ve pinned down our paint winner, we hope to move on to scallop-demo and then we’ll get to painting the hardboard gray and the trim white (along with framing out the curvy columns to make them look chunky and square like our future scallop-less header).

Hope we can tackle that before it gets too cold for exterior painting (especially since we’re also juggling the kitchen redo). Oh man, but can’t you just picture our happy yellow door with white trim and gray hardboard with that gray-undertoned brick? Hope it’s as lovely in real life as it is in my mind. If not… guess I’ll be repainting (we have gallons of the current colored house paint in the basement).

In the meantime, have you guys painted the trim or the siding of your house? Did you do the whole paint-a-few-test-swatches thing beforehand? Were you nervous? It’s amazing how not nervous I am. Usually I’m indecisive and happy to wait a while while thinking things over, but this time I’m all over it. Seriously, can’t wait. So here’s hoping the colder weather + the kitchen don’t make this a spring project. Come on fall, hold out for a while longer!