Work continues on our big opening between the kitchen and the dining room which I still forget exists until I stumble into the room in the morning only to feel the sun shining in and break out in song and dance. No really, I do. It’s like a Disney movie around here. So while we deal with door jambs (and trim and a wooden ledge for the half-wall) we thought we’d introduce you to the latest member of our family. It feels like it’s been forever since I’ve added to my brood of white ceramic animals, so imagine my delight when John surprised me with this fine tentacled specimen: 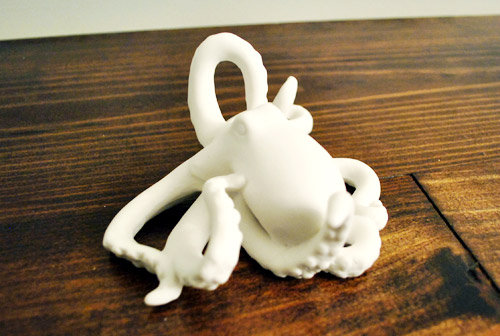 Apparently I mentioned that I was in love with it a while back, but it was out of stock at the time. So sweet John recently received an alert that it was available again and secretly ordered it for me. Right around the time I was secretly working on his surprise 7 for the office. Cue the collective aww.

We’re thinking of calling it my belated “congratulations on finishing the office stencil and not having permanent claw-hands” gift. Though it does make me a smidge jealous that I don’t also possess eight arms to help me finish projects faster. 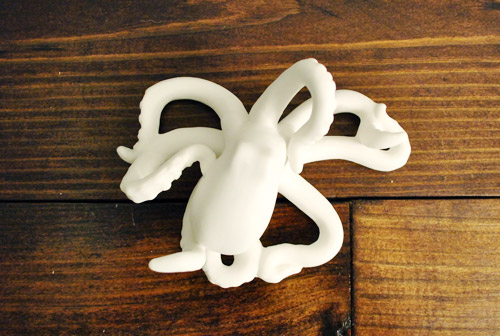 Important things to know about my new ceramic pal: she hails from Plasticland (but is made of porcelain) and I haven’t picked a spot for her yet (she’ll most likely end up on the dining room built-ins with a ton of our other ceramic family members so she’s out of Clara’s reach). She was $19, but with shipping she came to about $27. Not my cheapest creature (boils down to about $3.37 per tentacle), nor my largest (she’s about the length of a dollar bill at the widest point), but she is my first octopod! And she was a surprise gift from the hubby, so I couldn’t be my cheap self and talk myself out of it. Haha. Score. Oh, and her name is Henrietta. Not sure why. It just felt right.

Happy Friday to octopods, bipeds, and quadrupeds alike! Anyone doing anything fun? I’ll be found dancing in a certain doorway with a toddler and a dog. And no I won’t video tape it for you. I’m only ok with being this annoyingly chipper slash awkward in private. But it kind of looks like this.

Psst- As if John wasn’t cute enough for surprising me with my tentacled friend, this video of him introducing Burger to Clara for the first time (well, her scent) is pretty darn cute.

Wanna Be A Baller, Shot Caller, Drywaller (Hanging Drywall)
How To Trim Out A Cased Opening And A Half Wall