Considering that delivering The Washington Post was my first real job (because what 6th grader doesn’t like getting up at 5am everyday?), it’s kind of an “is this real life?” full circle moment for me that my current gig (this blog) has landed us in the pages of that very same newspaper. My dad (a.k.a. my newspaper delivery partner) has never been more proud. We had no idea it would be such a big write up (with a giant cover picture in the Local Living section, but after we got over our vanity (is my hair weird? does Clara look cute?) we couldn’t believe how awesome it was. Who are we and what did we do to deserve this? But enough blabbering. I gush when I’m excited.

Here are a few shots of the paper for ya (click ’em to enlarge) and of course you can see them in the flesh if you get The Washington Post. And you can read most of the article online here, here, and here (there are three parts to the story, but some of the pics are different than the ones in the actual newspaper article). And if the article has been archived, you can download PDFs of the text here, here and here. 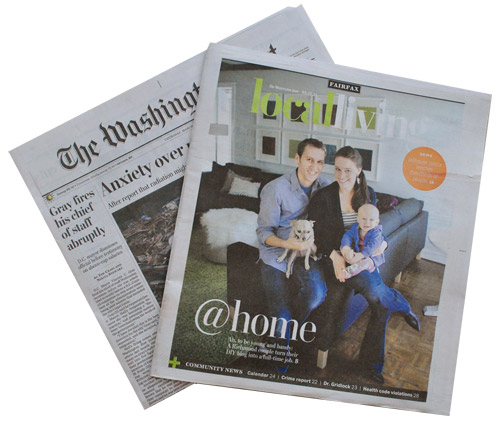 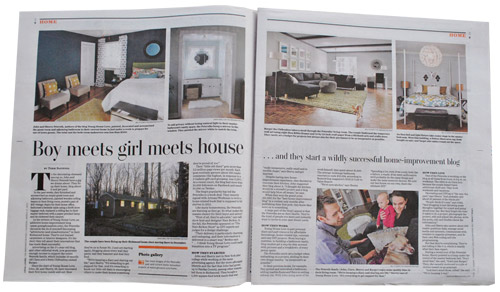 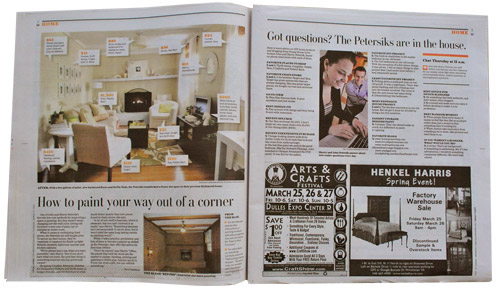 We especially loved this cool call-out thing they did with our old den about where we got stuff/what we paid for it: 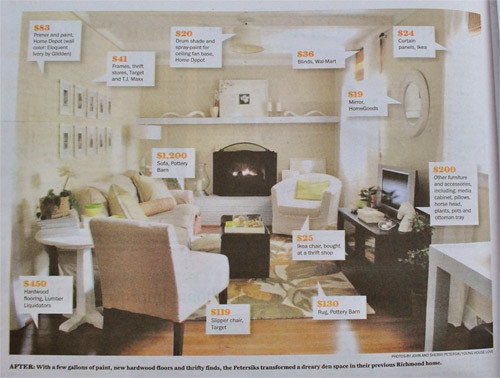 As for the pics, the Washington Post scooped us on a few things. Haha. It takes us a few days for us to do projects, take pics, and write posts – so they slipped through and snapped photos of things we’ll be sharing in the next few days. Should be fun…

Anyway, thanks to Terri Sapienza for the write up (us? really?) and for coming down to our house to hang out for the interview (which couldn’t have been less scary even though it sounded crazy intimidating when we first heard that she wanted to do it). She was a blast to have over and we realized that her husband and I lead eerily similar lives (beyond being married to women with rhyming names).

Oh and how insane is it that they actually called Nate Berkus for a quote about us (remember when we met him here)? Sherry just about died when she saw that. There were no words for about ten minutes, which is a total record for her. Consider us flattered (or too giddy for our own good if you’re Sherry- really she’s doing that uncontrollable giggle thing over here). Here’s his quote:

“First of all, they’re adorable,” says talk show host and designer Nate Berkus. In the fall, the Petersiks appeared on “The Nate Berkus Show” as DIY experts and judges for a design challenge. “Their delivery is particularly charming and endearing, and their information is delivered in a smart way,” Berkus says.  “ . . . I think Young House Love could easily transition into a TV program.”

How crazy is that? Seeing the paper this morning was like an out of body experience for both of us. We also think it’s hilarious that Nate thinks YHL could be a TV show, because we’ve actually been approached a few times about that over the past few years but are always quick to decline. We’re definitely TV people (I mean we like to watch it) but we don’t want to actually be TV people (as in, be on it). We’re much more comfortable hiding behind the safety of our computer screens. And as Sherry likes to say “we don’t wanna Jon & Kate ourselves, ya know?!” Besides, putting the blog on hold for weeks of filming might leave us with a serious case of withdrawal.

Side tangent officially over. Anyway, you may have noticed some other paper-related news revealed in the article: we’re in the very early stages of writing a book! Like a real one. That they’d actually have in Barnes & Noble. How crazy is that? When a few book agents and publishers approached us over a year ago, we figured that with all of the writing that we’ve done online each day over the past 3.5 years (over 1,752 posts and 891,000 words published) perhaps writing something offline could be a natural side project for us – especially if the topic is DIY and home stuff. Because you know that does it for us. But don’t worry, the blog will still be priority numero uno. After all it’s our first baby (well second, the birth order goes: Burger, YHL, Clara).

So after over a year of fine tuning our book proposal (yeah, it took forever, and ended up being 150+ pages long) we sent it out, held our breath, and were shocked and awed to be signed by Artisan/Workman. For a few weeks we were scared they would come to their senses, realize we’re dorks, and say nevermind – but holy bananas, it’s a done deal. And the process was kind of crazy and interesting, so for anyone else out there who’s looking to write a book proposal (and eventually a book), we’re planning a post about how it all went down and what that experience has been like for us.

There’s still an entire manuscript to be written, so it would be premature to say exactly what the book will be about, but we do know that it’s not going to be some fancy interior design coffee table book or a sordid behind-the-scenes tell-all novel with shirtless Fabio (or shirtless me) on the cover.

We’re aiming to capture the don’t-take-yourself-too-seriously DIY spirit of our site without regurgitating a lot of stuff that you’ve already seen slash read here (we want it to feel fresh and new). And of course it’ll have budget friendly ideas along with fast & easy projects that anyone can do (except if you’re tied to a pole). Since publishing a book takes much longer than publishing a blog post, we’re scheduled for a fall 2012 release – and we’re mucho excited. We couldn’t wait to spill the beans to you guys after lots of months spent biting our tongues and keeping cats in bags.

So that’s the news up our sleeve at the moment. I guess it’s only polite to ask – what’s new with you these days?

UPDATE: Check out this more recent post about the book-writing process.