Thanks for the encouragement from this morning’s post to choke out my rambling September 11th story guys. As hard as it is to tell, I feel like it’s something I’ll want to look back on – especially when Clara’s older and I’m trying to explain the enormity of that day. It was a terrible day, but such a life-changing one too, and it definitely shaped who I am. And as much as I love having thousands of DIY posts in our archives, sometimes it’s those rare personal posts (like this one or this one or this one) that make me the happiest that I dumped all the jumbled words out of my head and onto the keyboard.

I’ve debated whether or not to write this for six years now, every time this anniversary rolls around. I was a college sophomore living in New York City on September 11th, but the experience of being there and watching everything happen right in front of my eyes is still something I haven’t quite wrapped my head around. So I’ve stayed mum on the topic for all of the years we’ve been blogging. I don’t know what makes this year any different, but I felt like I was ready this time. It’s crazy how something that happened 12 years ago can feel so distant, but when I start talking/typing about it, I remember every sound and smell and sight and it floods back like it was yesterday. Early that morning I had been in Grand Central working on a show house for Country Home magazine (my best friend and I interned there during the morning we didn’t have classes, just lending a hand to unwrap accessories so the rooms could be styled). 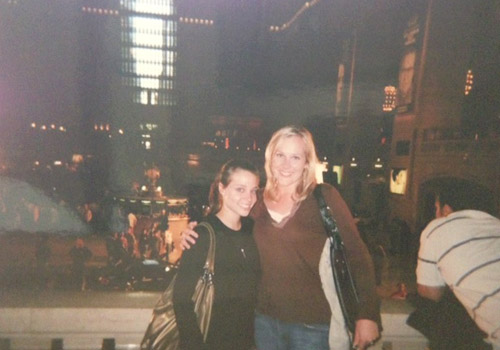 I remember hearing from our boss right when we got there that a plane had hit the World Trade Center, but it sounded like it was minor (like some small plane with the wrong coordinates made a mistake). Nothing like “terrorism” or “act of war” was mentioned, so we shrugged and kept unpacking boxes while a few people called relatives who worked in the tower, just to check on them. It sounded like only a few floors were affected, which had us worried for those people but no one was really freaking out. Then a little while later we heard the second tower was hit. The only way I can describe it was immediate panic. Grand Central was evacuated within minutes.

There were guards with guns and people rushing us out and they just sort of explained that this was another “landmark” in NYC, so it wasn’t safe to be here because there were fears that other places in the city were going to be targeted. Thank God my best friend was there with me. I completely panicked and had no idea where to go or what to do. At this point the entire subway system had been shut down (again, because it was a “target” so the city wanted to evacuate any place they thought could be hit next) so we all spilled out into the street in front of Grand Central and my best friend and I just walked towards Penn Station, which is where the train we took to our apartment in Bayside, Queens would be (assuming those were still running).

When we got there we learned it wasn’t. So we just walked around aimlessly and found ourselves sitting on the steps of the New York Public Library. We were terrified that it was another target (should we sit here? should we keep walking around?). I think we were in a state of shock, so we just sat down on the steps anyway. People were rushing by and there were crazy things just laying in the street and on the sidewalk, as if someone abandoned them half-way through running. A man’s shoe. Just one of them. An open briefcase with papers splayed out all around it. Nobody’s cell phones were working, which was especially scary for those trying to reach us (like our parents). I remember saying “we should just conserve our battery and our energy and sit here.” Then people started pointing at the smoldering towers, which we had a clear view of from the library steps (we could see them smoking in the distance since they were such a huge part of the NYC skyline). A large cloud of dust flew up from the first tower and someone shouted “It was hit again!” and someone else said “They’re bombing it!” and the tower fell right in front of us. It just imploded on itself with a giant cloud of dust flying up into the air.

Of course we didn’t know at the time that the heat and damage sustained by the initial impact of the plane had caused the tower to fall, so it felt like a very real possibility that the tower had been hit again, causing it to collapse. I remember someone screaming “we’re at war!” and someone else just closing their eyes and raising their hands and saying the Lord’s prayer over and over again.

At that point we ran. Just sort of scattered like ants and everyone was crying and there was dust billowing up the streets, even though the tower had fallen over three miles away from us. There were police officers and firemen just covered in ash. They were entirely gray with white eyes and white teeth. There were people bleeding who had been close enough to be hurt by debris who were clearly running on foot from downtown since no public transportation was available anymore.

We eventually ended up in the first floor of a hotel in midtown, just hiding in the foyer. There was a TV on with people gathered around and that’s when we saw the second tower fall. It was so quiet you could hear a pin drop. Nobody wanted to talk or move. I think total shock is the perfect description. And fear. We were literally frozen in fear. At some point the hotel offered to let people up into some vacant rooms but we didn’t want to go upstairs even if it was just a level or two up. We had just seen two skyscrapers collapse. Nobody wanted to be anywhere but on the ground floor. So we could run.

Somehow late that night we got back to our apartment in Bayside, Queens. Some of the trains had started running and we got some spotty cell service to reassure family we were okay. We didn’t know what to do with ourselves, and kept finding ourselves drawn to the now completely changed skyline outside, so we went out on the tiny old balcony of our apartment and that’s when the smell hit us. Like something burning, but also rancid. I don’t know if I was stupid or in denial or what, but I asked my best friend “do you think that smell is the burned metal from the building?” and then we looked at each other and realized that the building wasn’t the only thing burning. And we cried.

What haunts me the most were the thousands of missing person posters that were plastered everywhere in the days and weeks afterwards. Fences and scaffolding and subway walls were covered in faces of everyone who was lost – photos of dads smiling with their children. Women hugging their dogs. Christmas cards with the missing person’s face circled with an arrow. It was gut-wrenching. I remember telling my friend Lindsay that I had a dream about a man in a suit and the whole time I was thinking “how do I know him?!” and in the morning I realized he was one of the faces on the fence near my apartment. 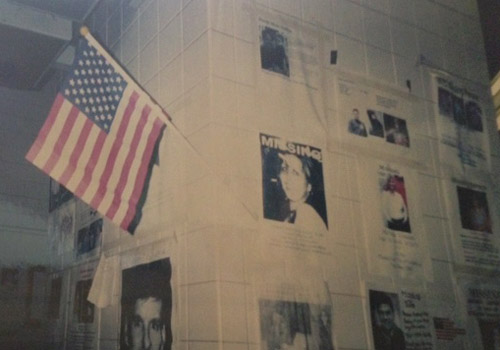 A friend of mine’s dad actually got out of the first tower and was safe on the ground when his boss told him they were cleared to go back in for their wallets and belongings, so he went back in and the tower fell, killing him. I just remember crying with her and saying how unfair it was over and over again. It felt even more cruel that he had been outside and then ended up back in there just as it fell. Stories like that seem all too familiar now, especially those of the policemen and fireflighters who ran in just as the towers crumbled. At the time I think we were half devastated and half numb. It felt like too much to process all at one time.

But one amazing thing about being in New York during that time was the love and support. It sounds crazy, but we were all family in that moment of grief. We all wanted everyone to be okay, and we wanted to rebuild and come back stronger. For the weeks following September 11th we’d thank the dusty firemen that we saw on the subway with tears in our eyes and buy drinks for the workers who were downtown digging through the rubble for survivors. It sort of was like a war that we all had lived through together, and we were all on the same side. It was us against the bad guys, and we were stubborn New Yorkers – there’s no way we were going to just lie down and let them win.

My sophomore year of college had only recently started when it happened and classes resumed about a week later, once the subways were up and running again. A lot of my classes were emptier though. That year I’d say about 30% of my friends left the city. September 11th changed everything and some just couldn’t stomach the idea of being there any longer. I completely understood, but nothing in me ever even whispered “leave.” New York City was my home, and I was staying. I think for the people who stayed, it felt like we grew stronger. More bonded. We looked at each other on the subway and on the streets and we all sort of silently encouraged each other. We’d never forget that day, but we weren’t going anywhere.

I lived there for four more years. I finished school. I got a job at an advertising agency right in midtown, less than a block away from Grand Central – the place where my world got turned upside down a few years earlier. It was at that agency that I met John and we started dating. In fact he took this picture of me and my best friend about a month before he and I moved to Virginia to start a life together. 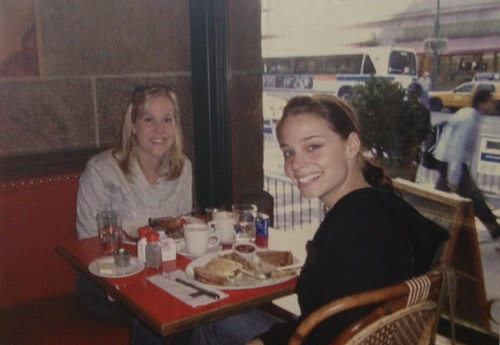 So while I’m a Richmond gal now, I’ll always be a New Yorker at heart. NYC forever, baby.