Yup, that’s what I did. Well, technically 14 months and three days if you’re really counting. And yup, this really is a post about breastfeeding, so feel free to skip it (you know, if you’re my brother for example). I never thought I’d be writing about it. But I actually get a lot of questions on the subject. And since I blather on about other random things (like cloth diapering) and this blog is really just a way for us to remember things that we might otherwise forget (like paint colors and vacation happenings), I figure that something I did for so long (around 425 days straight) deserved a post about the range of emotions that it elicited. So here we go. 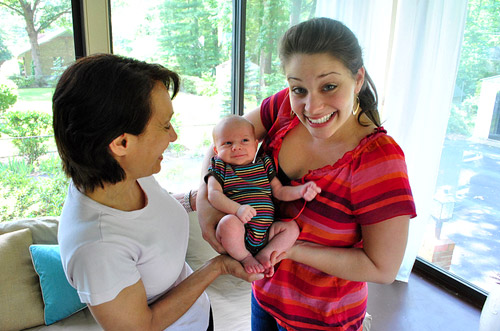 My first emotion: grateful. I was just so thankful it worked. I was acutely aware that some moms try extremely hard but it’s just not possible. I was also pleasantly surprised that it wasn’t as painful as I expected. I’d heard a lot about cracked and bleeding nipples (yes I just typed that) but thanks to genetics or a good latch (or some other random happening) I didn’t really have much pain at all (in the interest of TMI, I also never had sore boobs while prego, so maybe those things go hand in hand?). And I know the whole lack of pain thing might make you want to punch me (it annoys the heck out of my BFF) but I had a pretty frightening birth experience so I guess it’s always something (and not always the same thing) that throws you for a loop as a new mom.

Speaking of the whole birth thing, I was initially really stressed about Clara “taking” to breastfeeding because, due to our complications, I couldn’t nurse her until eight whole hours after she came into this world. I heard trying as soon as possible was the way to go, and I guess the whole scary birth experience had me fearing the worst (there was no baby-on-my-chest-to-snuggle-and-nurse-right-away occurrance, which is definitely what I pictured). But the sweet nurses pretty much just said to give it a try and it was miraculous. Clara got it right away. Such a relief.

As far as emotions go, after “grateful” and “pleasantly surprised” I moved into “exhausted and overwhelmed” territory. Clara was blissfully sleeping for 12 hours each night pretty much from the beginning, waking up for just one or two feedings most of the time (after we got the ok from the doc to let her sleep instead of waking her up to feed every 3 hours since she was steadily gaining weight). 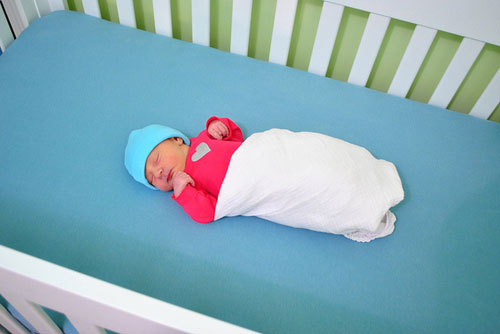 But that meant that during the day she was feeding every two hours like clockwork (I fed her on demand, and at almost exact two hour intervals she screamed and wasn’t happy til she was nursing). So I really couldn’t get much done without having to stop and feed her. Which I actually loved for the bonding and the sweetness and the self-imposed break that it gave me from housework, blogging, and all that other stuff – but it was definitely exhausting and sort of all-encompassing in those bleary I-have-a-newborn months. I always joke that she let me rest at night, but during the day she made me work for it.

And when we went on a week-long family vacation when Clara was just six weeks old I remember sitting upstairs alone with Clara feeding her in a bedroom while everyone else was downstairs having fun together and thinking “I’m going to have to excuse myself and do this about eight times a day while everyone else hangs out – which adds up to 56 feedings that I’ll be doing over the next seven days.” That’s an overwhelming thought. At least it was to me. It was times like this that I actually wished feeding in public (or at least in front of your extended family) was more widely accepted. I tried to use a nursing cover but Clara wouldn’t have it. So up in my room I sat (with occasional visits from John who sweetly recognized that I’d rather be with the group and dropped in to keep us company). Back in these days feedings were pretty slow going (around 15-20 minutes per side for a total of 30-40 minutes spent sequestered). But we still managed to fit in some fun in the sun (or shade since she was so tiny). 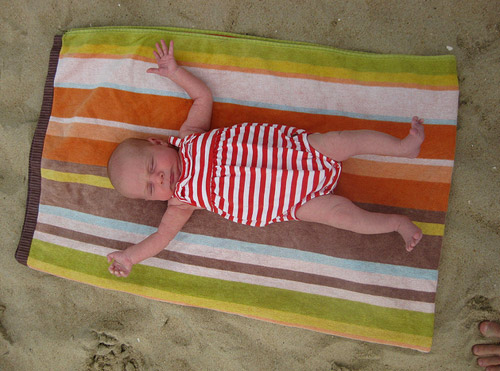 I should mention that 1) pumping didn’t agree with me and 2) Clara never took to bottles (or pacifiers for that matter). You win some and you lose some. So every time she fed for the past 14 months it was directly from the source. Which was ok with me since pumping just didn’t work out and thankfully I have a job that allows me to be home with her. But it’s definitely sort of crazy as a concept because for over a year I was never away from my daughter for more than an hour or two. Ever.

But with a face like this, I was ok with that: 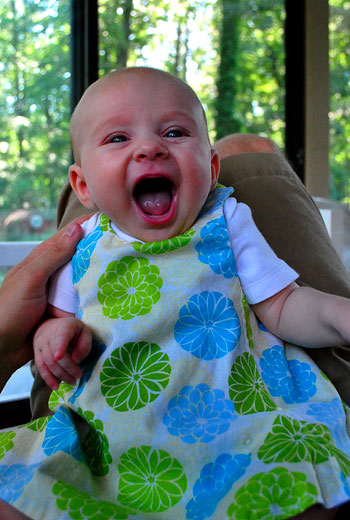 Around three months in I really got into the groove though. That’s where I’d characterize my feelings as “content and accepting.” I was happy to still be able to breastfeed and glad that it seemed to suit Clara. She seemed to enjoy it and I knew how to do it effectively and easily enough (in a parked car? check. in a dressing room? check). I even managed to sneak in a taping for the Nate Berkus show, nursing Clara in the green room right before we went on and right after (thankfully it was only a two hour process – or we might have heard her screaming for another feeding from on stage). 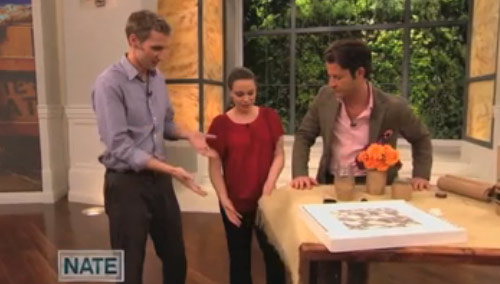 I guess I had adapted more to it, and it didn’t feel like as big of a job after I got into the swing of things. And by about 6-8 months old Clara had become a lot more efficient, so feedings were only about 15 minutes total (and sometimes even ten). Interestingly enough, the introduction of solid food at six months old (which Clara loved from day one) didn’t have any bearing on her nursing. She still wanted just as much, just as often. And I was secretly kind of relieved because I worried a bit about my production slowing or even stopping if she suddenly dropped a ton of feedings. But that was not the case.

Up until Clara turned ten months old I was still feeding her every two hours during the day at her insistence (screaming until I nursed her = her insistence). That’s right, for ten months (that’s 300 days) I nursed Clara every two hours (except during the night). I was ok with it, and my doc was ok with it, but I heard from friends that only going two hours between feedings at that age was reallllly often (as in all of my friends were only feeding every 4-5 hours or so at that age). My doc explained that it made sense since Clara was such an unusually solid night sleeper (she segued from waking up for 1-2 feedings in her 12 hour span of night sleep to not waking up at all around 2.5 months in – I know, we’re insanely blessed to have gotten such uninterrupted sleep for such a long block of time). But it did mean not-as-long daytime naps and a whole lot of frequent feedings to “tank up” during her waking hours in exchange for such an awesome night’s sleep. Heck, I’ll take it.

Blissfully, after turning ten months old Clara started stretching her feedings to every three hours, which felt amazing. It’s funny how an extra hour feels like all the freedom in the world. It’s all relative I guess. At this point I was coming into the whole “I love breastfeeding” phenomenon. I still felt grateful to be able to do it, Clara was a thriving happy girl, it was saving us money, it gave me a moment to step away from the computer/paint brush/hammer and connect with the bean, and it helped me get back into my old clothes (even though I don’t think I’ll ever have my pre-baby body again, it’s fine with me because Clara’s so worth it). I should add that I’m a breastfeeding enthusiast when it comes to me and Clara, but I don’t judge anyone else when it comes to what they choose for their family. Whatever works for you & your ducklings = my mantra as a parent in general. 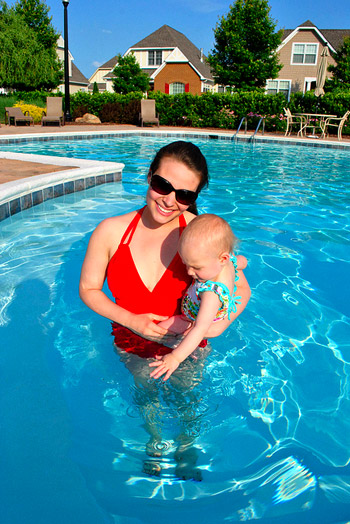 The next speed bump that we encountered was when Clara turned a year old we introduced organic whole milk. The problem? Clara wouldn’t drink it. She still wouldn’t really take a bottle so our doc recommended trying a sippy cup. It worked for water, but she refused to drink milk (and we tried about ten million different sippy cup varieties, tried slightly heating the milk, tried watering it down or mixing it with breast milk, etc). This is when I started fearing that she’d be 21 years old and still addicted to breastfeeding. 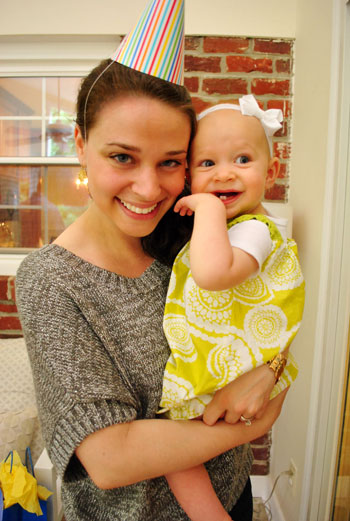 Next we tried almond milk at our doc’s advice, and she went for it (we think the thinner consistency seemed closer to breast milk so she was down). And slowly we mixed almond milk with whole organic milk and she made the transition to 100% whole organic milk at around 13 months. Yup, it took nearly a whole month to get her on board with it. She’s stubborn like her momma. Haha. Shockingly, that’s when her feedings dropped waaay down. From around five times a day to just two – once before bed and once in the morning. Which made me feel excited and free but sort of oddly sad at the same time. “My baby’s growing up, and she needs me less” was sort of how I felt. I know that’s not really true, but it’s the best way I can describe the feeling.

By 13 months and three weeks she just wanted a feeding in the morning when she woke up. Clara has always been the boss of this whole breastfeeding thing (since we opted to just do the “on demand” thing from day one), so who am I to argue with the girl? Just one morning feeding opened up a whole new world of evening fun for me and John thanks to his parents offering to babysit (we could see a movie or go out to dinner without Clara after over a year of not partaking in those activities – amazing!). Of course I thought about her the whole time we were out, but I guess that’s to be expected (picture me saying “I wonder what Clara’s doing right now” every ten minutes during our first movie together in over a year). 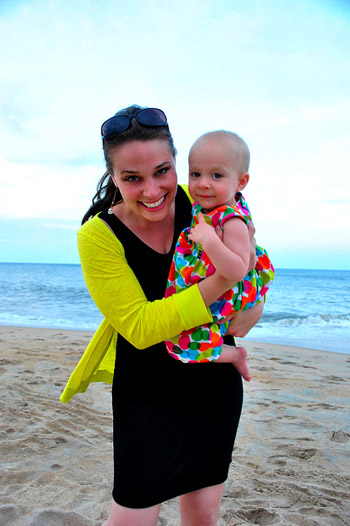 Two weeks later Clara wasn’t even interested in her morning feeding. Which was sad because that’s the one where we lie down next to each other and relax together. I know I sound crazy, but it was such a sweet way to start the day. To anyone who has yet to try it, nursing on your side while laying down = awesometown (they taught me that move at the hospital thanks to the whole c-section thing). And now it’s over. So my current feelings are sad (because I’ll miss it) but proud (because I can’t believe I breastfed for over 14 months) and grateful (because I know being able to nurse that long or even at all definitely isn’t a given).

So that’s my breastfeeding journey. Off to cry now (and I can’t even blame breastfeeding hormones for the tears). I know, I know, someone with a nickname like $herdog shouldn’t be such a wuss. But it was an awesome/exhausting/amazing/tiring/surprising journey that I’m grateful to have experienced. Love you baby girl. Even if you’re over my boobs.