You don’t even know the half of our moving day adventure. We glossed over it because we knew you deserved empty shots of our old place and pics of the new house’s interior – but we couldn’t let this story go untold. So take a moment to pantomime the buckling of your seatbelt and get ready to enjoy the ride. As we mentioned earlier, the day started off with an unexpected surprise: a snowstorm. And even though it wasn’t a Friday, the thirteenth of this month (aka Monday) surely lived up to its less than lucky reputation. Which is so not a good thing when it’s closing/moving day. 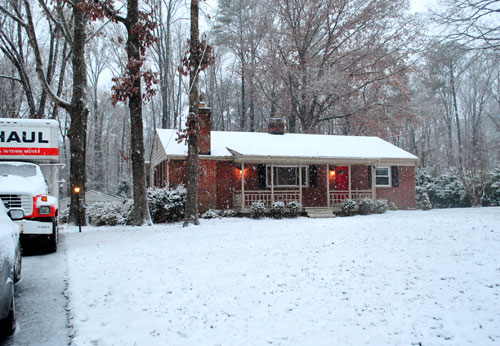 Sure the snow was pretty, but it definitely had its hand in a few unlucky events that day. Like knocking out power at our attorney’s office, making it a bit more difficult to stay updated on what was happening and get transfers and files through in order to complete our closing on time (which is partially why it was delayed until Tuesday). But that was nothing compared to this, um, predicament: 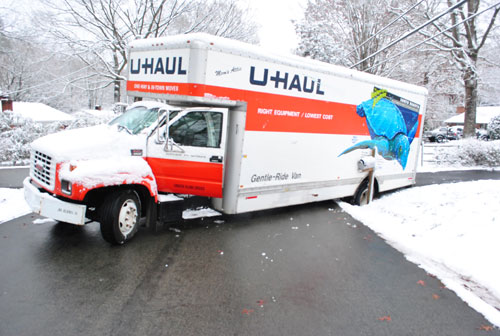 Yep, that’s our 26 ft U-Haul truck in a ditch, blocking two lanes of traffic. And it’s not just any ditch. It’s the ditch at the end of our driveway- er well, the driveway that we had just sold. So technically, it was someone else’s ditch that was holding my truck captive about an hour before they’d be returning with the keys. Not to mention it was someone else’s mailbox that the truck was precariously leaning against. Sigh.

Here’s how it went down (pun intended). Sherry was already at my sister’s house with Clara and Burger playing the waiting game until we could move into the new house. I had been dropped off at our old house to meet the buyers and their agent so they could do one last walk-through of our old casa before closing (apparently to make sure it was vacant and everything was still intact… can you taste the irony already?). The walk-through went fine and I was leaving right behind them in the giant truck packed full of all our worldly possessions when this happened (though they were already too far up the road to see it). I blame it on some combination of paying too close attention to keeping the front end of the truck from ending up in the ditch across the street, snow that was hiding the edge of the driveway, and general inexperience when it comes to driving a big ol’ truck.

At least that’s how I like to tell the story. Sherry prefers this phone conversation play-by-play:

SHERRY: Okay, be very careful. It’s snowy out there so drive as slow as you need, even if people are honking at you. Just take your time.

SHERRY: Great. I just don’t want you ending up in a ditch or anything.

[HANG UP, SHERRY GOES TO PUT HER PHONE DOWN BUT IT IMMEDIATELY RINGS AGAIN.]

JOHN: Crap, the truck is in a ditch and I think I knocked over the mailbox. 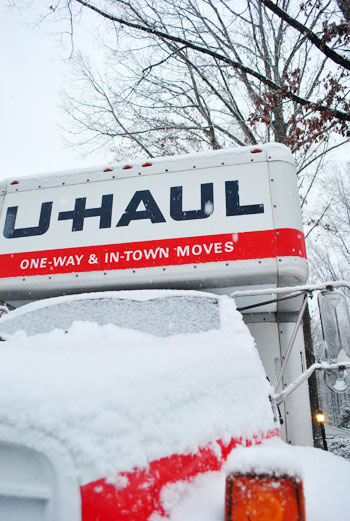 We can laugh about it now, but let’s just say it was definitely a disastrous moment in our heads at the time. We had visions of everything in the truck shattering and having to wait hours to be towed out (which would definitely have pissed off the new owners who would be back with the keys in about an hour after their closing). Fortunately none of that happened. Heck, the mailbox didn’t even fall over.

Once I got the truck towed out of the ditch (within about half an hour- which was truly miraculous in that storm with all the other car-riddled ditches to be attended to) I drove it about one mile an hour over to our new house. Then I called our house’s new owners’ agent and agreed to replace the mailbox post (which had cracked in the process). Between that and the tow truck charge to un-ditch the truck, the whole ordeal ended up costing us $185. Sucky? Yes. But it could have been so much worse (so far not one thing that we’ve unpacked has been broken- which is a total Christmas miracle because the back of the truck crashed down at least 18″ when it slipped off the driveway). We’re just happy it didn’t result in a cracked flatscreen TV, a delayed closing, an injury, or any other number of things that could have gone wrong. And it somehow made making it into our house later that day that much sweeter. Like we’d battled all sorts of insane and unexpected adversity, only to end up where we belonged by day’s end.

Plus, later that night I redeemed myself by surprising Sherry with this: 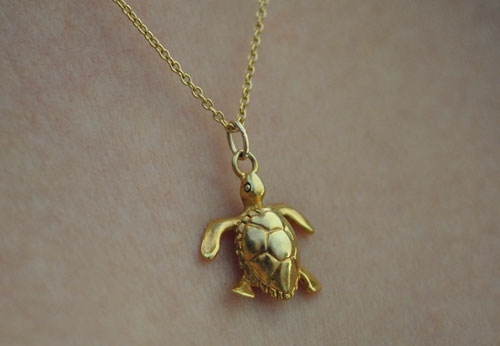 I snagged it on lunaCielo’s Etsy shop a few weeks ago (after hearing Sherry admire Courtney Cox’s small gold turtle necklace during Cougar Town). I though it made a great house-warming gift because it came with this note about the turtle’s symbolism: “The turtle’s whole life is one of steadfastness, effort, and patience. There is a saying, “Home is where the heart is” — the turtle is always at home within itself.” As we switch from one house to another, it’s a good reminder that our sense of home stays with us wherever we are.

And perhaps on this unlucky day, it was a good sign that even our ditch-bound truck itself was emblazoned with a giant turtle. Coincidence? You be the judge. 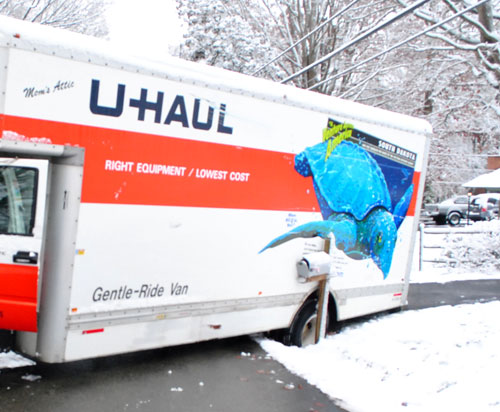 So that’s the story of Monday the 13th. Don’t say I didn’t warn you about what can happen when a case of the Mondays merges with that unlucky number…

Did We Make A Profit Selling Our First House?
The First Day In Our Second House