A few of you actually called us on something that we said a while back for our BHG & Home Depot sponsored porch makeover project. In the early stages we mentioned that we were planning to whip up some twine mobiles among a slew of other projects but there was nothing of the sort in the big reveal. Of course we were allowed to change gears mid stream, but you can imagine how thrown we were when our little twine mobile project was a total bust and were back to the drawing board for a way to add a bit of ambiance to the corner of the porch. Sure things worked out in the end, but here’s the long circuitous route that we took to create those hanging candle holders that we used to gussy up our front porch: 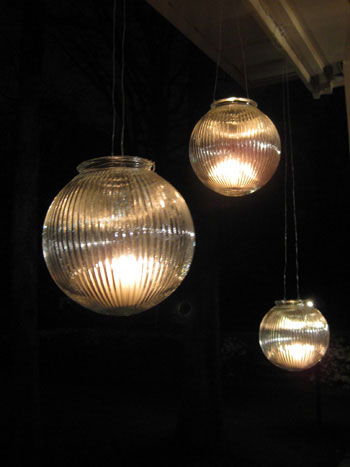 A while back John and I had seen a really cool idea in ReadyMade magazine about using string, a balloon and fabric stiffener to create a one of a kind hanging light fixture. So when we were trolling Home Depot for something that we could hang to create interest on our porch, as soon as we laid eyes on some jute twine we decided there had to be a way to make some great woven mobiles using the same basic method. Sure twine is heavier than string and Home Depot didn’t happen to sell fabric stiffener (all of our tools, materials, and furnishings had to come directly from Home Depot so we couldn’t hit up a craft store for any supplies), but we were certain there was a way that we could make those twine mobiles work.

We decided to switch out the suggested “fabric stiffener” for indoor/outdoor urethane (in clear gloss) which we reasoned would stiffen the twine after we wrapped it around a balloon to create a nice round shape. We figured that it would harden to create a pretty strong shell around our mobiles so they would keep their globe-like shape and could happily live outdoors through rain or snow. First John blew up a balloon and tied the end of the twine to the end of it. Then we submerged the twine in urethane and wrapped it around the balloon to create an awesome woven orb. 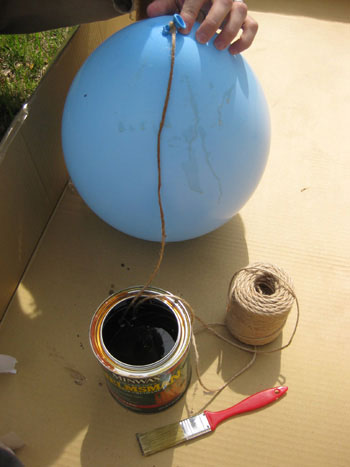 It was definitely a messy job, but doing it outside over a huge piece of cardboard made it go pretty quickly and before we knew it we had a good thing going on. 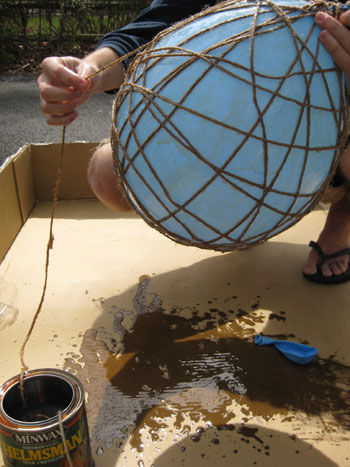 Within about thirty minutes, we had three different sized twine mobiles hanging to dry in the garage. All we would have to do is pop those balloons after the twine stiffened up for a foolproof trio of textural mobiles to add interest and fun to our little porch project. 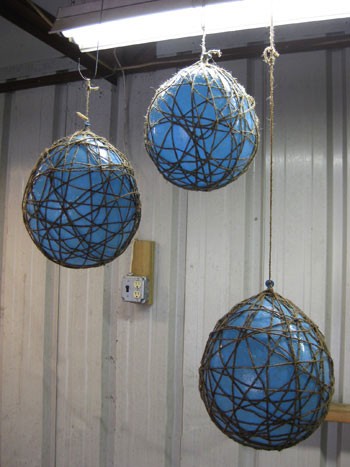 Or so we thought… 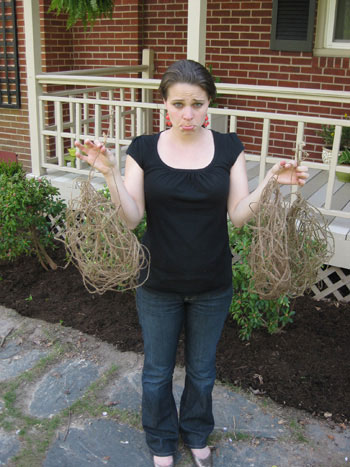 Yes, that’s me holding our beloved twine creations. And yes, they look like something a giant cat might cough up. Before we left town to celebrate Easter with the fam they were hanging happily in the garage, but somehow in the time that we were gone they experienced technical difficulties that caused them to collapse prematurely. We have a few theories about why this happened (#1: the urethane was so corrosive that it actually ate through the balloons causing them to pop before the twine had adequately dried therefore resulting in the demise of the orb shape, #2: the twine is just too heavy for the urethane to support in that globe-like shape, #3: light cover lanterns were our destiny so the universe intervened to sabotage our first project). Whichever was the case we were sure sorry when we came home to this sad state of affairs.

So it was back to Home Depot to totally redeem ourselves. Or fail miserably under pressure.

Our first thought was that we could save our twine mobiles (first stage of grief: denial) by sticking something round inside of them to stretch ’em back out into their old globe-like shape. So when we happened across these cheap-o bulb covers in the lighting department (just $4.99 a pop) we decided to snag three of them and give ’em a whirl. We intentionally went with the thickest ribbed glass we could find so they wouldn’t be too delicate for the great outdoors, and as soon as we loaded them into the car our conversation shifted from trying to save the hairballs, er twine mobiles, to making little hanging candle holders with our new discoveries. So we stormed back into Home Depot to grab some thin wire for stringing up our light covers. 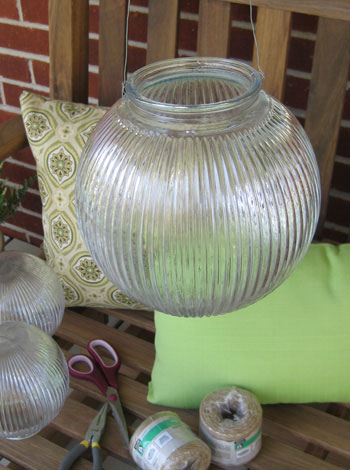 But how did we get our bulb covers to hang? A little trial and error taught us that securing a ring of wire tightly around the neck of the glass cover was step one. We used our needle nosed pliers to cut the wire with about an inch of extra wire on each side. Then we twisted both ends around each other to create a strong, tight bond, so there was now a ring of wire that rested firmly beneath the lip of the glass (using our needle nosed pliers to tighten things certainly came in handy). Then we cut a super long piece of wire to create the “handle” that we’d use to hang our candle holders from the cup hooks that we installed in the ceiling. We secured this extra long piece of wire by looping it under the existing wire ring around the neck and twisting about an inch of wire on each side around the ring and itself to secure it in place.  We had about a half inch of extra wire on each side so you can see how we tucked it tightly around the lip of the glass cover at a right angle, which seemed to help the handle from sliding around the ring (each side stayed more securely in place across from the other after we added this modification). 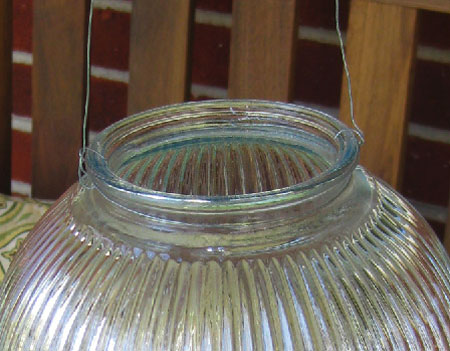 In short: a ring of wire around the neck of the glass bulb cover was the foundation that the loop of wire for hanging could be twisted around so the whole shebang could be strung up with a cute pillar candle inside. Each lantern took about five minutes to make and ours have been hanging happily on the front porch through rain and even a tornado warning for the past month. 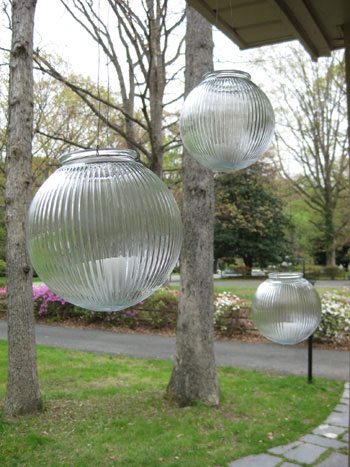 In the end of course we love the added ambiance that our trio of candle-lit accents bring to the front porch project (all for just $20!), so although we’re sad that our little twine mobiles were a bust, we’re happy to say that the second time really was the charm for this project. 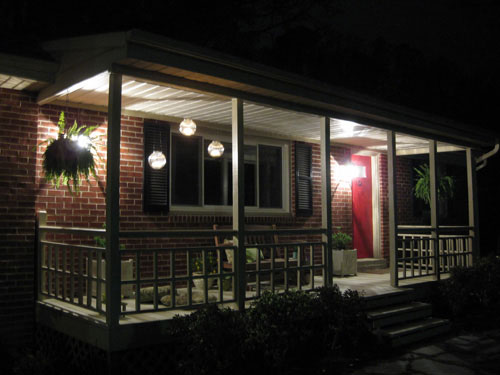 So how about you guys? Have you used anything unexpected (from the hardware store or even the grocery store) to amp up your home decor? Do tell.