It’s been nearly three years in the making, so it’s hard to believe that the day is finally here that we can share our longest-stretching side-gig to date. We’ve been designing a collection of products… and a bunch of them are now being sold exclusively at Target (!!!). Cue the sound effect of a cat sprinting out of a bag. 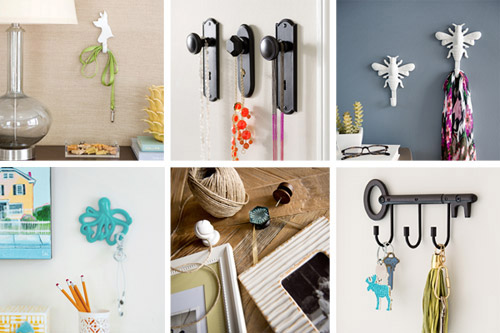 We designed three or four dozen pieces before the final mix was chosen – and those designs, which are an assortment of wall storage and hooks, are available right now at Target.com and will be on endcaps in most US stores starting March 31st.

You’ll be able to find them in the Home Improvement section where they’ll be hanging out for 14 weeks. Did I mention that we’re freaking out like Clara next to a furry mascot that she “just wants to hug and squeeze”? 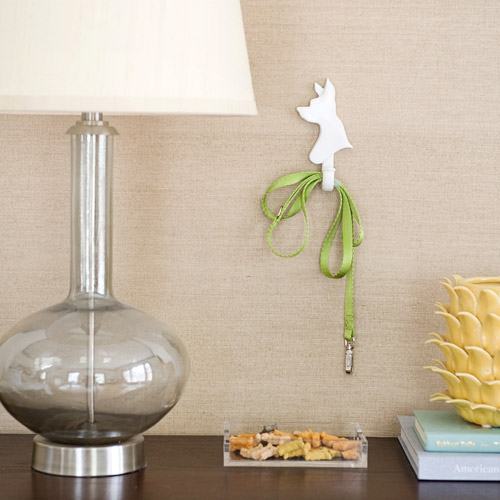 To say we never thought something like this would ever happen to us might be the biggest understatement of our blogging careers. And even when this process started rolling waaaaay back in July of 2011, we never expected that it would end up here. 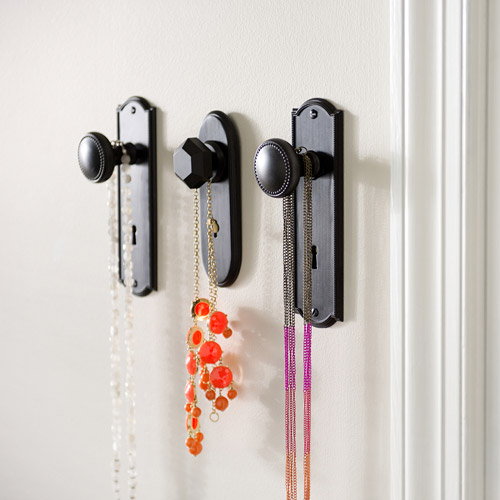 When you look at the collection you’ll notice that we’ve adapted a lot of things that we love – from bees and old skeleton keys to a certain ridiculously handsome chihuahua. And everything’s priced at $14.99 or less. 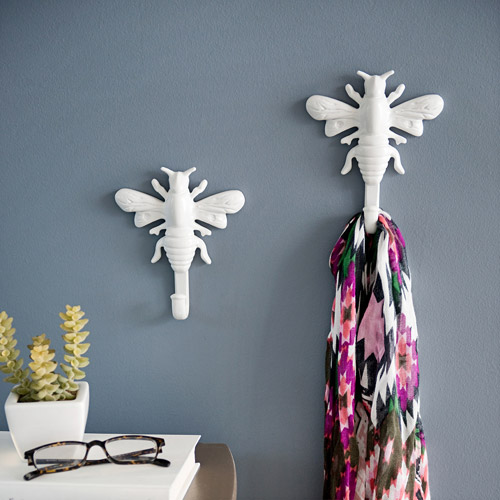 We even included a bit of DIY customization in the mix, thanks to these raw wood hook rails (one with a picture ledge on top, and one without) that you can personalize with paint, stain, wallpaper, decoupage, or whatever else you have on hand. Then you can choose any of the four hardware styles in either oil-rubbed bronze or white and screw them into the predrilled rail holes. 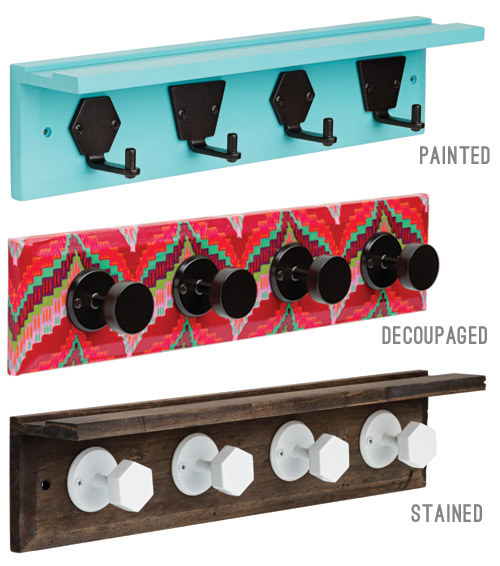 But let’s rewind back to July of 2011, when this whole thing started. At that time, a company called Liberty Hardware was a sidebar blog sponsor of ours and they asked to come interview us for some research they were doing about the do-it-yourself trend. A few months later, that research turned into an invitation to explore the possibility of designing some products with them. When we said yes there was no part of us that ever envisioned them ending up in a store like Target. 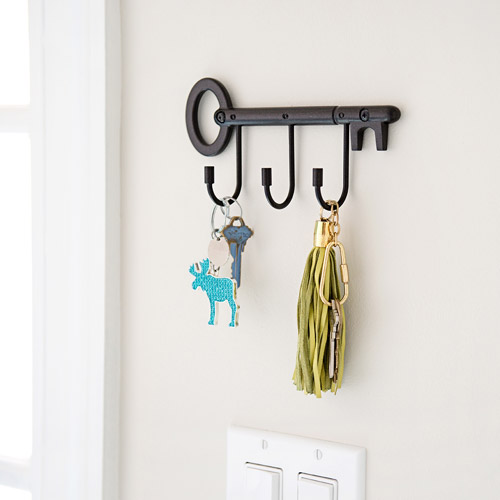 The next two years were an exciting and sometimes intense process of design and development. Never again will we underestimate the work that goes into making those everyday products that we see on store shelves. We were primarily responsible for the creative direction, which involved providing everything from rough sketches to color/finish input along with design tweaks and feedback at every step of the design process. Liberty’s team was great to work with, and had things like manufacturing feasibility and sales analysis covered – which was a huge necessity to taking our ideas from paper (and visions in our heads) to real-life objects. 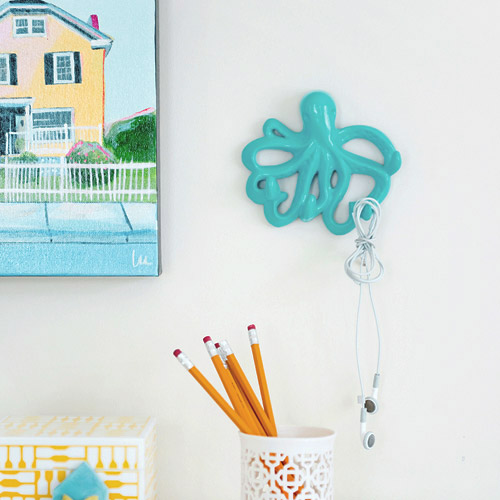 The development process was hugely interesting to us because it was like nothing we had ever seen. From the drawings & images that we provided, the Liberty design team would illustrate some options, the best of which then got modeled either on a computer or in clay by hand (sometimes both). Those then became 3D printed models that could get cast to become real production prototypes and eventually the final product was born. There was feedback, tweaking, and even a few “back to the drawing board” moments at each step in the process. Questions of scale, symmetry, functionality, finish, price, etc. were always being considered – as well as how everything would fit together as a collection. Heck, there was even a focus group held at one point! So all-in-all we probably designed forty or fifty pieces before they got narrowed down to the current mix. 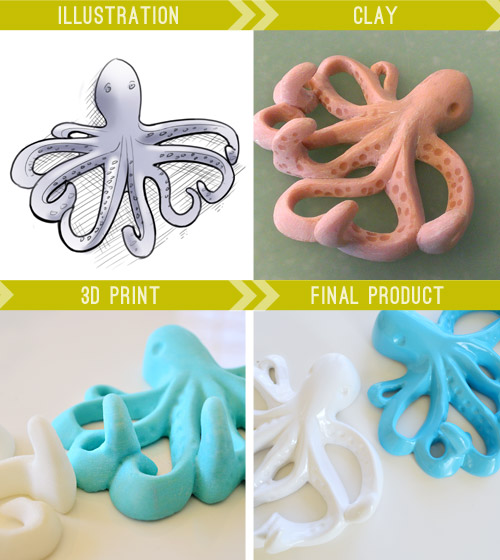 While lots of the design work happened virtually (through email and conference calls), The Liberty team – which is primarily headquartered about 3.5 hours from us in Winston-Salem, NC – traveled to Richmond on several occasions. We also found ourselves traveling to see them in North Carolina, meeting with their design team in Chicago (that’s Adam pictured, who has been bringing our ideas to life from day one of the project), and even flying out to the Target headquarters in Minneapolis at one point. Despite that meeting happening in late April of last year, we still happened to catch a major snowstorm. We’re not sure how you Minnesotans do it. 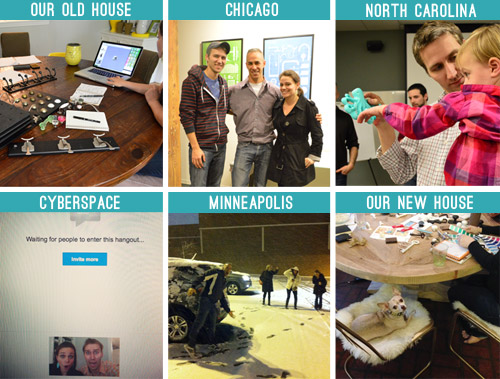 That trip in Minneapolis was especially surreal, since it happened just a few months after we had been there for our book tour. It was weird to be secretly traveling there after so freely Instagramming our previous tour travels. We actually got recognized a couple of times while standing outside of the Target offices, so we were pretty freaked out that our cover was blown (to the folks who said hi to us, we can now apologize for being SO INSANELY AWKWARD). Secrets are no fun. 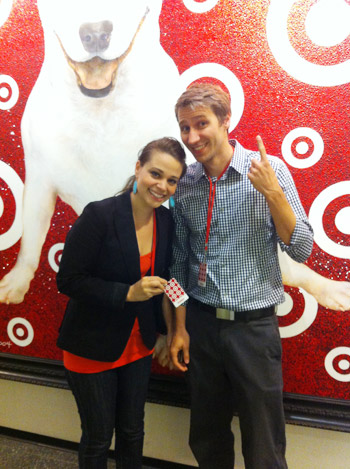 We shot the images you see in this post (and that appear on the packaging) in our house last November. It felt a lot like our book shoots when we were trying to create a diverse mix of backdrops in a house with very few painted walls, so we had to get a little creative. You can see in this photo that we used a remnant piece of grasscloth wallpaper to spice things up behind the Burger hook. And that’s our brother-in-law/pro-photographer Todd who did all of the shooting. Nothing like keeping it in the family. 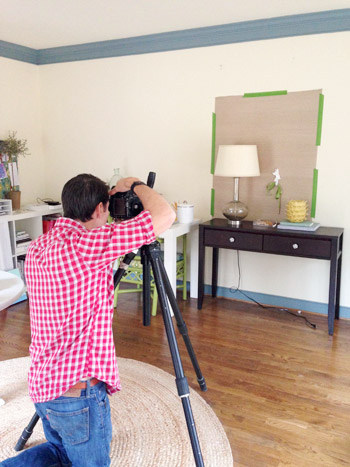 Once it was cropped, you’d never know there was painters tape and blue trim lurking just out of frame.

After all those months, all those trips and meetings, all those designs and redesigns, and all of the shooting/writing for the packaging, it still feels completely unreal that this project is out in the world now. And we’re even more excited to hopefully roll out more products as the year goes on. Yup, we’re actively pitching new designs that go beyond wall hooks and storage (Target prefers the idea of tight collections, so we’re working on different home/DIY themes that could be switched out seasonally).

We owe a huge thanks to all of the people who’ve been a part of this, especially those who have put up with our silly questions or nit-picky changes. So a big virtual hug goes out to everyone who saw something in our ideas, and helped bring them to life. 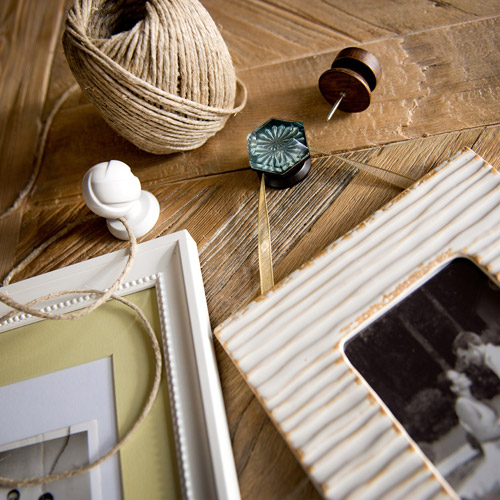 And of course we have an insane amount of love for you guys for sharing this crazy journey with us (and for putting up with our “secret project” for so long – we really wished we could have told you, oh, 32 months ago). Never in our wildest dreams did we think that first post back in 2007 would lead us here. Oops, I think the orchestra is playing me out, but picture me waving my chihuahua hook in the air while Sherry gracefully trips over her gown on the way down the steps. She’s the J. Law to my J. Leto (I just have to work on my flowing man-mane).

You can browse and buy everything now over on Target.com, and then it’ll be in most stores beginning March 31st. Fingers crossed that the sight doesn’t send Sherry into labor! 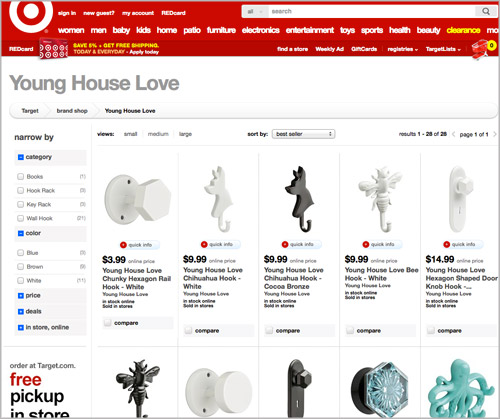 Wallpaper In The Nursery?
Updating A Craigslist Desk For Our Office