All this wedding week chitchat must be making you hungry, so you’re cordially invited to sink your teeth into a few of our delectable wedding day dishes.

Perhaps our most daring DIY feat was completely nixing the idea of a caterer in favor of taking on the entire wedding menu ourselves. I know we sound cuckoo-for-cocoa-puffs, but there were a few major reasons behind our seemingly insane decision. A lot of catering companies require a separate prep area and our modest rancher just didn’t have the space. And we also thought strangers dressed in black peddling hors d’oeuvres in our backyard might be a little odd for our intimate affair. But most of all, we’re just hopeless DIYers with an unhealthy attraction to seemingly impossible challenges- so even though feeding 75 people sounds like quite a job, it really wasn’t so bad thanks to thoughtful planning, a few make-ahead components and some pretty crafty delegation (in the form of pre-prepared offerings with a gourmet spin).

We made our lives much easier by carefully designing a menu that didn’t require any heat (other than our entrees which were cooked up on the grill) and called for nothing more than a single fork (when it came to side dishes and hors d’oeuvres, upscale finger food was the name of the game). Keeping our offerings simple (fresh fruit, cocktail shrimp, rotini salad, lemon pepper potato chips, etc) and adding an upscale twist when we could (like an unexpected ingredient or delightful dipping sauce) really seemed to work with our informal backyard wedding theme. 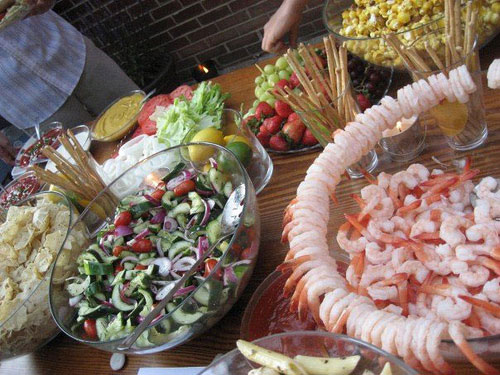 Another example of our “simple with a twist” approach to the menu was demonstrated in our main course choices, which we wrote out on a chalkboard hung above the grill for all to see. 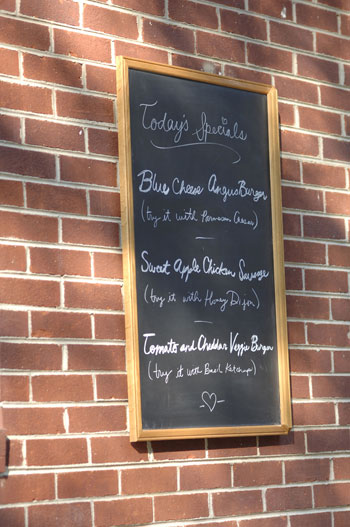 Our guests approached the grill and ordered up their choice of a blue cheese angus burger with parmesan caesar dressing, sweet apple chicken sausage with honey dijon, or a tomato and cheddar veggie burger with basil ketchup. We actually made all the blue cheese burgers ahead of time (by adding chunky blue cheese dressing to ground beef and freezing the meat into patties to be defrosted that morning) but purchased the sweet apple chicken sausage along with the tomato and cheddar veggie burgers in bulk from the grocery store a few days in advance. Of course we splurged on some gourmet buns and added a little flair to the toppings (like a dash of fresh basil worked into the ketchup and the caesar dressing that topped the blue cheese burgers). A few fun twists on some old favorites really seemed to satisfy, and we purchased more than enough to go around (so people could try more than one entree if they so desired). 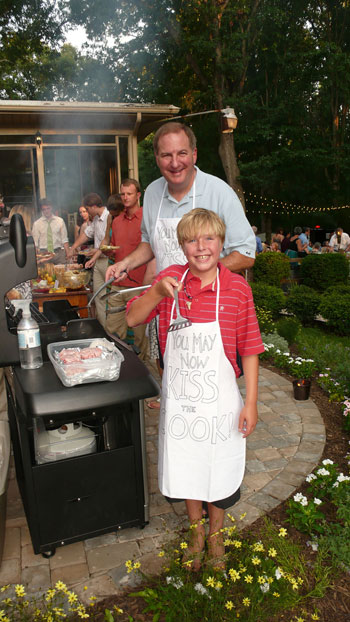 And even though we didn’t have a moment to taste a thing, the overwhelming consensus was “mmmm” as demonstrated by lots of seconds and hardly any leftovers. 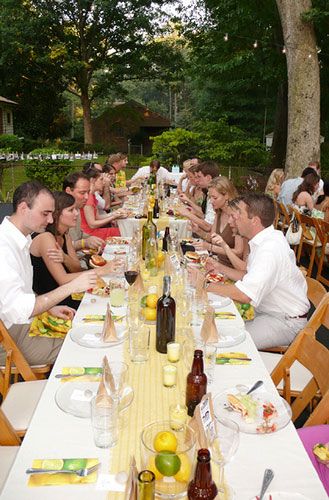 Another adorable detail thrown together by my hubby in the final hour (unbenownst to me since I was inside getting gussied up) were the extra lemons that John used to accent a big tin of ice cubes. Somehow the 10 cent lemons added so much more to the $8 galvanized tin of $2 ice… a true testament to something becoming far greater than the sum of its parts (and to my hubby’s genius eye for style). 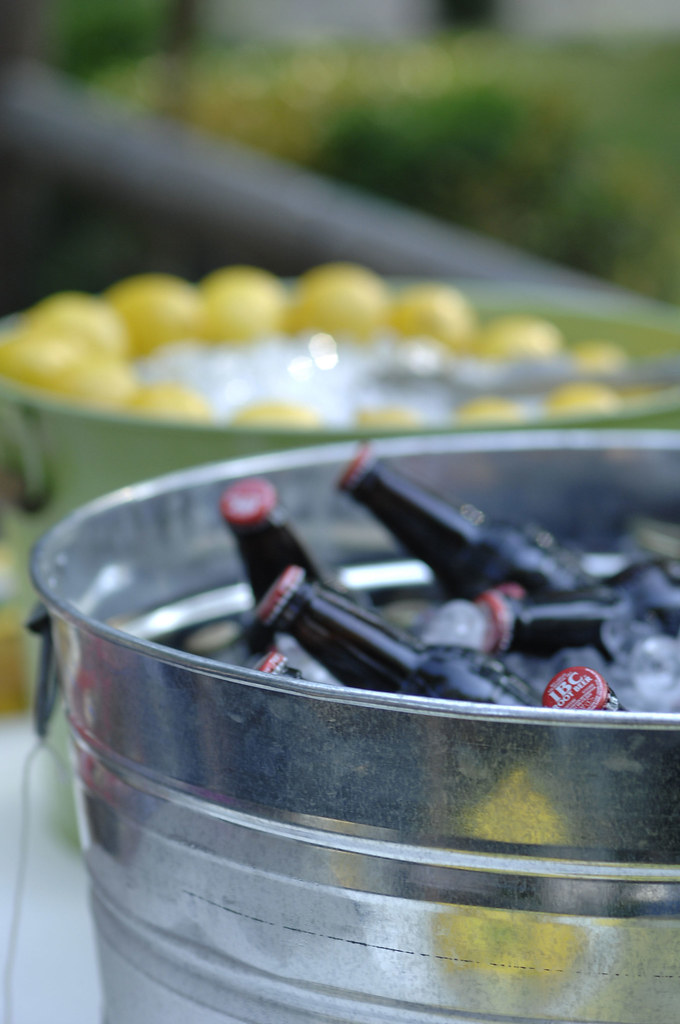 By far the most popular menu choice was the decision to keep it simple and serve Richmond’s famed Ukrop’s cupcakes. For those not in the know, Ukrop’s is a local grocery chain, which just happens to have reached celebrity status for its heavenly vanilla cupcakes. We considered swankifying the cupcakes with green and yellow spinkles or lemon candies, but realized that to mess with perfection would be a mistake. And when served en mass the seemingly simple cupcakes transformed into a sea of creamy confections that people literally couldn’t get enough of (several people confessed to downing four or five of ’em). And we can both agree that feeding each other cupcakes was a fun take on the ceremonial cake feeding tradition as well. 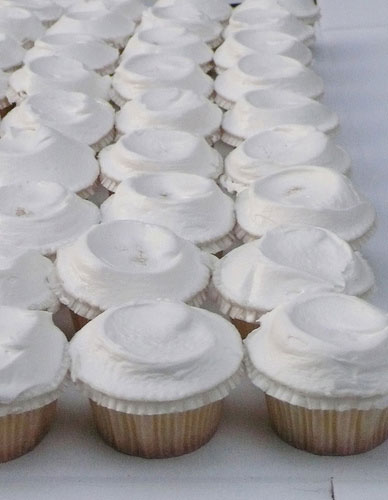 Another fun touch was the s’more roast we had at the very end of the night. After some of our friends and family had moseyed on home, the remaining guests had fun bringing the night to a close by gathering around our firepit and cooking up a melty treat for the road. Marshmallows, chocolate bars, and graham crackers are hardly budget busting extravagances, but the s’more roast was just another one of those memorable details that really stuck with people far after the embers went cold. 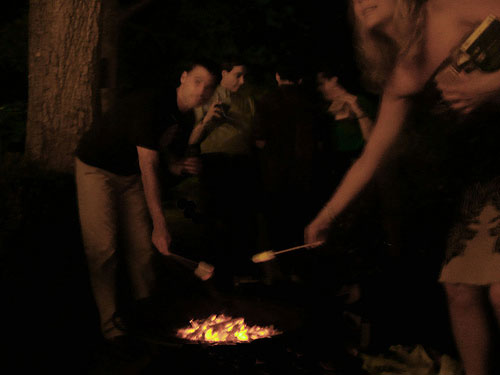 And just as all good things must come to an end, This Young Wedding Week must now come to a close. We hope it was as good for you guys as it was for us. Thanks so much for your enthusiasm throughout the exciting matrimonial extravaganza, and don’t be too sad that it’s over. After all, we have some pretty amazing before and afters in the hopper for the upcoming week so stay tuned…

*Drop in on our Wedding Album tab below the header to check out all the details of our big day from start to finish!

Wedding Week: Sweet Details We Worked In For Fun
How To Make An Upholstered Headboard