With our power washing done we could finally stain and seal our deck, which we completed and re-furnished on Tuesday (literally hours before our first showing!). 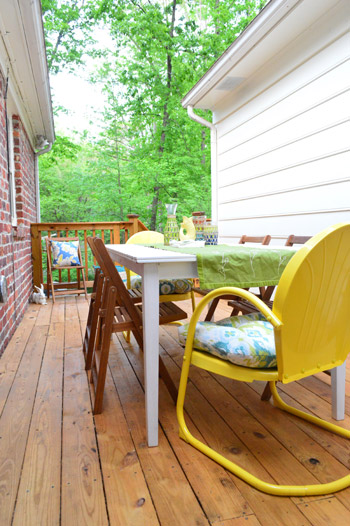 But let’s rewind to where we left off yesterday. We mentioned that after finishing it in late August we were told to give the pressure treated wood 2-3 months to dry out before sealing any of the moisture from the treatment in (apparently sealing or staining PT wood too soon can lead to terrible results). So by the time staining was advised, it was too cold out to apply the stain. But even after spring rolled around and we power washed, it still wasn’t quite ready. 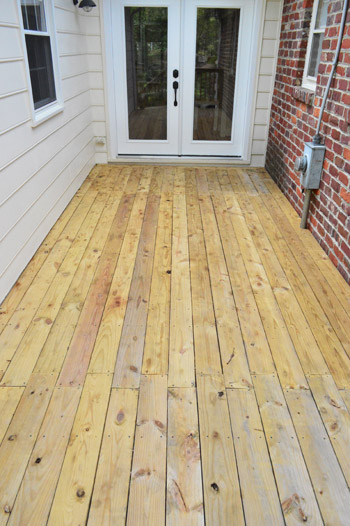 What was standing in our way? Some lingering grime that the pressure washer didn’t remove in this corner. Sherry didn’t think it was that noticeable, but I was determined to get things cleaner before staining (I feared that we’d seal them in and potentially darken those spots even more if we didn’t get them off first). Yes, you can call me Nerdy McWorrypants. 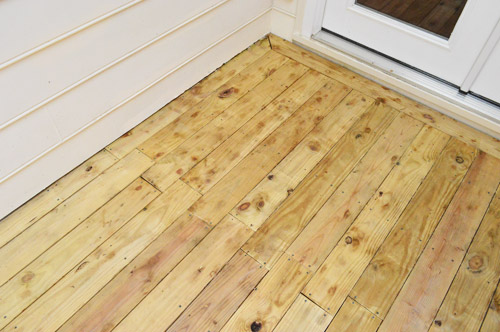 Since we hadn’t used a cleaner during the pressure washing process, I decided to try one after the fact. Lots of deck staining tutorials (like this one and this one) recommend applying some sort of cleaner first, so I didn’t want to skip that step. We grabbed this $7 “Deck Wash” because we liked that it could just be sprayed by attaching it to a garden hose. 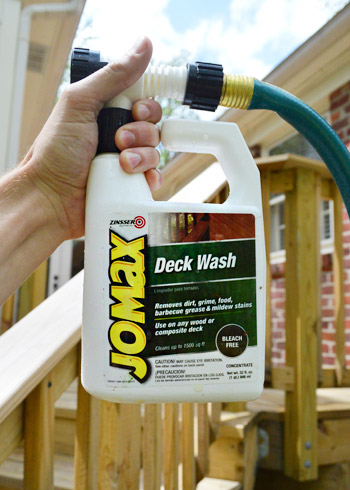 I followed the instructions, which was basically spray it, let it sit for about 5 minutes and then rinse it off. Could cleaning a deck really be that simple? 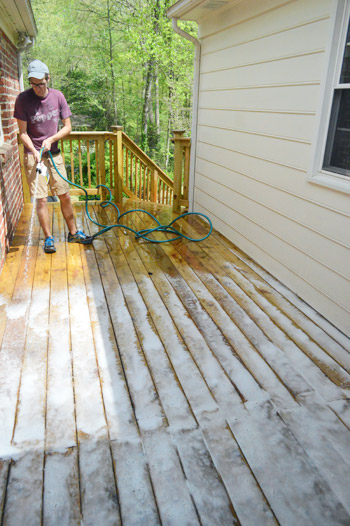 Apparently not. I didn’t even bother taking an “after” photo because it looked exactly like the before.

After two attempts (pressure washer, then cleaner) I was about to admit defeat. But I decided to give cleaning one more try, this time in the form of an $8 Olympic brand cleaner. I had bypassed it originally because it required buying this $11 sprayer. 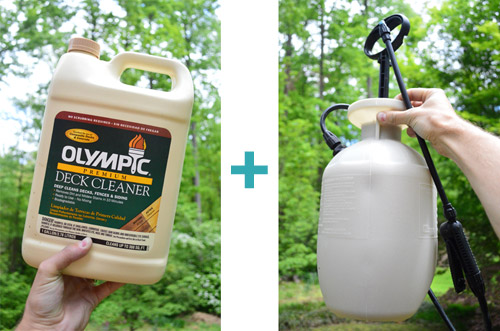 Well, this cleaner most definitely made a difference. The same spray process commenced, I let it sit for a few minutes, and then rinsed it off, but this time it seemed to essentially bleach the whole deck clean. I was a smidge panicked with the result at first (although I had read that a bleach mixture is a commonly recommended deck cleaner) but in the end it was the exact blank slate that we needed to apply a nice even coat of stain. So to anyone wondering if the $8 product with the $11 sprayer can be that much better than the $7 one that works with a hose… in our experience the first one did nothing and the second one worked overtime. 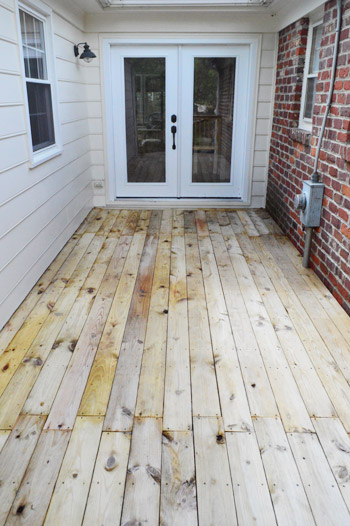 Next up was applying the stain/sealer, which Sherry and I were both eagerly anticipating (literally the minute Clara was tucked in for her nap we sprinted out to get started in the hopes that we could finish everything before she woke up). Here were our supplies: 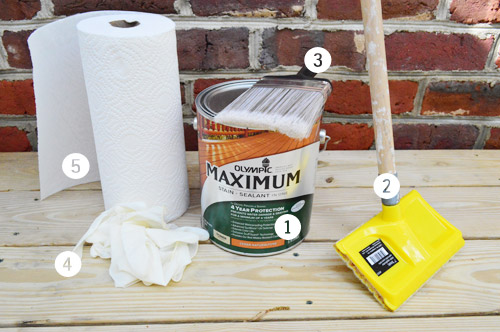 As for choosing the type of stain + sealer to go with, we heard a lot of great things about it from a friend of ours who recently used it (and a few readers mentioned the same one as well). We chose a toner over a semi-transparent finish because the color would be subtler and more of the wood would show through. We’d grown so used to the “natural” look of the wood that we didn’t want to go too dark (especially with the dark brick wall on one side) and our only other hope was that it wouldn’t look too red-orange either. Of course if you look at the photo below, straight out of the can it was pretty darn orange, but thankfully it dried to look a lot more subtle. 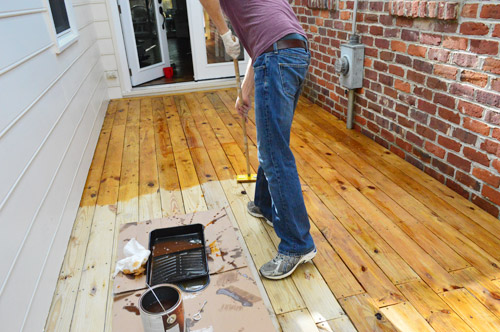 Before taking the train to Staining Town, we had read up on several options for applying it – spraying, rolling, brushing, etc. – and we opted to use a sponge-y “deck stain applicator” because we had seen my dad use one before at my Granny’s house. Both in watching my dad, and in our case, it was pretty easy to use and seemed to make things go really quickly. The only catch is that you need to “backbrush” afterwards, which keeps the stain from pooling in any place and also apparently helps work the stain into the wood. So as usual, I did the rolling-ish step (in this case, it was the sponge applicator) and Sherry was the brush girl (she followed quickly behind me, brushing over everything I stained to work the stain into the cracks and keep it from pooling anywhere). 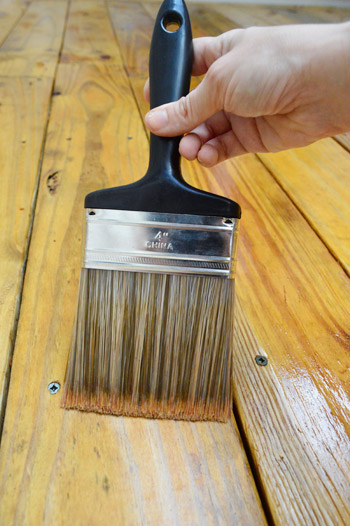 The top portion of the deck probably took us 15-20 minutes (this stain + sealer only calls for one coat). So that part was waaaay faster than we expected. It was the stairs and railings that ground us to a halt. That part had to be done with the brush making sure that we got all sides of each post while watching out for drips and puddles. So it took us more time and focus than we expected. Maybe two hours in total for that part? We kind of lost track, but Clara woke up before we were finished so I went in to watch her and Sherry “The Paintbrush” Petersik stayed back and got ‘er done. 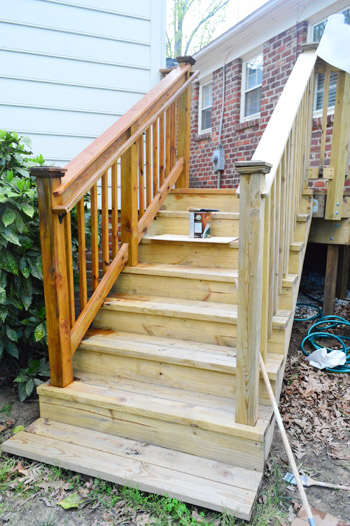 When the stain was still wet we worried that the color was redder than we had wanted, but when it dried it did exactly what we wanted – it just “toned” the wood, so it still looks similar to the other exterior wood around the house (like the fence around the patio, etc). Oh and you might notice that Sherry took a moment to paint the utility box to blend a little more with the brick, just like she did at our first house. It only took a test pot of paint (around $2.50), so although it’s hardly invisible, it’s a lot less “Look at me!” in person. And I think you can tell in the photos when you compare it to the picture a few photos up. 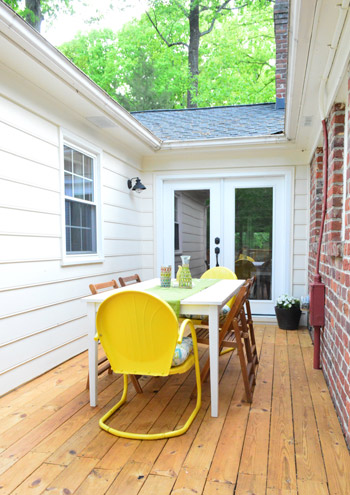 Best of all, I was totally redeemed from my failed-ish attempts at cleaning. Here’s that corner that was especially dirty looking. 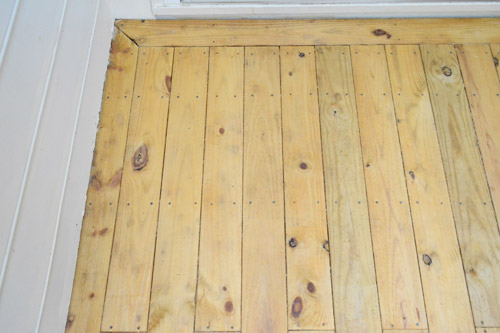 It’s not flawless, but it’s much improved over where we were post-pressure washing. 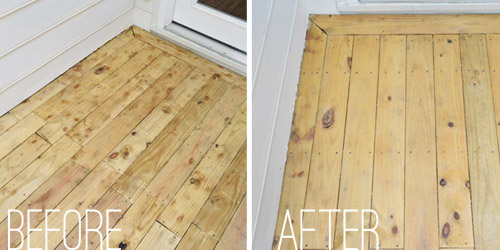 So now, eight long months after construction on the deck wrapped up (and 10 since it started!) it’s officially stained and sealed. And I’m still just as proud of her. Thankfully we got to enjoy the deck all through late fall and early spring (even before she was cleaned and stained) but it’s nice to know that she’s 100% complete and future acorns and leaves can’t do as much damage if they decide to hang out too long. 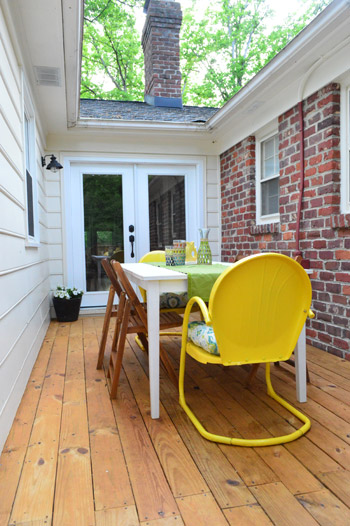 We also finally calculated the long awaited deck budget breakdown for you guys (we wanted to get her stained/sealed before breaking down the benjamins) so here it is:

I definitely think if you didn’t have to build such a large staircase (ours has 8 steps with long railings on either side) you could save a good chunk of money. And if you don’t fail your first inspection and have to rent the auger again, you’d save 60 more bucks. Oh and you can save seven more if you buy the good cleaner the first time. Ha!

I think this project was one of my biggest (it’s right up there with our first house’s bathroom gut-job) and it certainly saved us money to DIY it (it probably would have been around 6-8K to get this hired out) but most of all it gave me confidence. Dude, I built a deck. And the permit guy said it would hold a bunch of elephants. I’m a proud poppa. 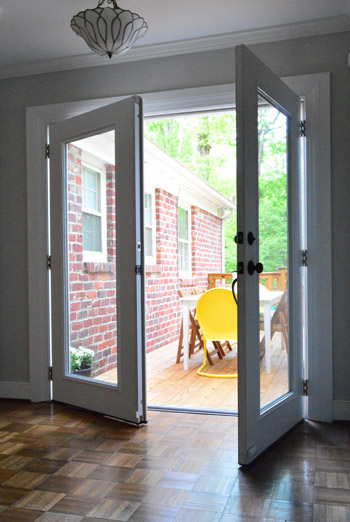 That odd little alley of ours has definitely come a long way. Here’s a picture we took during our first walk through back in 2010. 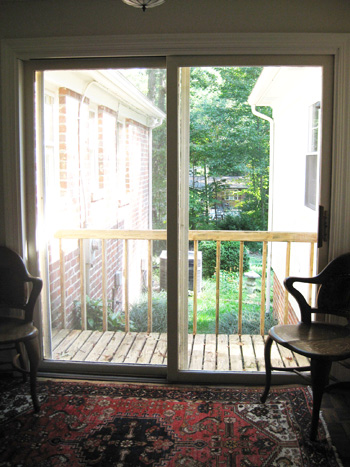 Anyone else staining a deck? Did the stain look crazy bright right after it went on? Have you tried one of those deck stain applicators on a stick? I really think in combination with the brush it was a fast yet thorough method.

Using A Power Washer To Clean Wood, Brick, And Cement
A Video Tour Of Our New House