Let’s do the path (I’m not good at math, but digging up a path, I can do). And John’s good at both. Overachiever, much? Anyway, this is just a photo from before we started working on the garden beds on either side of the porch (more on that here and here) so you can see how that clump of bushes in front of the porch was kind of weird and reversed. Don’t you think plants on either side of the porch would look nice and balanced while the path to the door and the porch should be more open and airy instead of crowded by overgrown boxwoods? It was like things were backwards. Business in the middle instead of business on the sides. It was a bush mohawk. 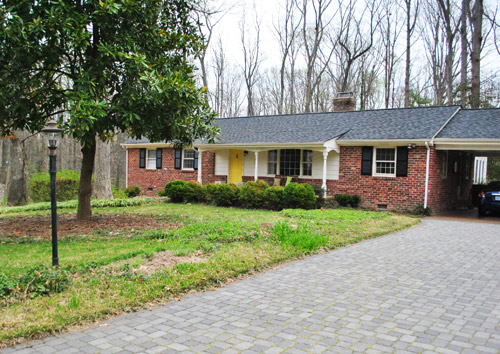 And when a certified landscape expert (more on that here) confirmed that those boxwoods were on their last legs anyway due to some bare spots and diseased tops, we were even more sure we had to open things up so the path to the door felt less crowded (don’t worry, we still tried to transplant as many as we could to see if they’ll make it in a less in-yo-face location). 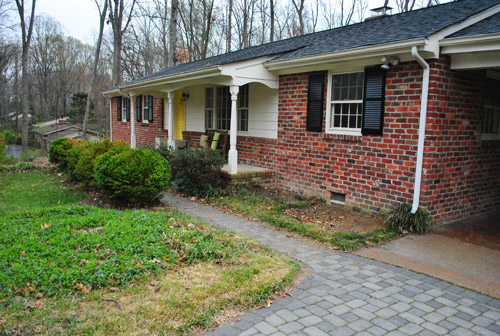 See what we mean? On moving day we dragged things down this path approximately 5,000 times with the bushes reaching out and grabbing us the whole time. 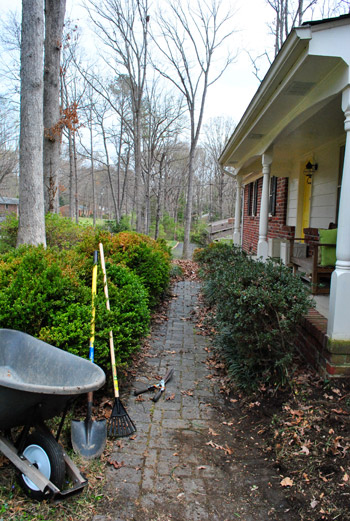 They just don’t have any understanding of personal space. We actually learned from our little landscaping consultation that pathways are ideally four feet wide so two people can walk next to each other or carry large items without getting bush-groped. So the least we can do is make this path feel as wide as possible by opening things up. 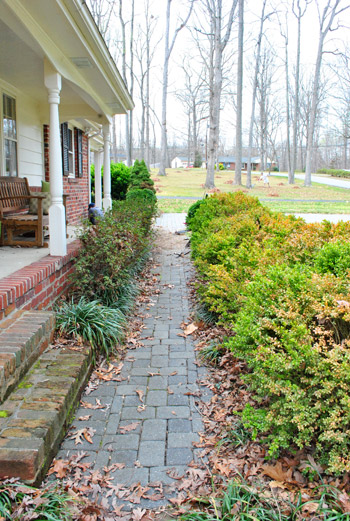 Operation Clear The Path began with us digging out the azaleas that were completely crowding the porch (their base was literally just inches from the brick side of the porch). That garden bed is tiny, and no place for large bushes like that. They weren’t too bad to dig up since the ground was wet from rain the day before – and we transplanted them on the side yard that we’re trying to naturalize so it’ll have some pretty pops of color down there and they won’t be nearly as cramped. 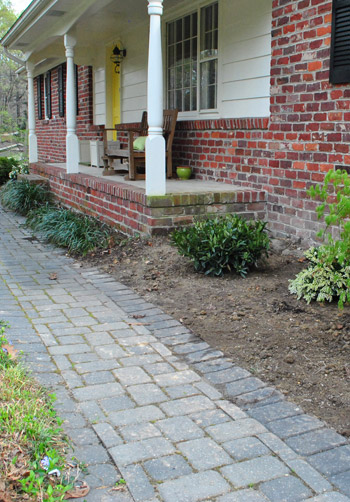 Next it was time to dig up those boxwoods along the other side of the path. They were a bit more challenging to get up, but again thanks to moist soil from previous rain, it wasn’t too bad. It probably took about fifteen to twenty minutes per bush and there were eight of them, so this was an almost three hour process done over two Clara naps. A few of the bushes were too far gone so we just cut them out with the reciprocating saw and then dug up their roots since that was easier if there was no saving them. 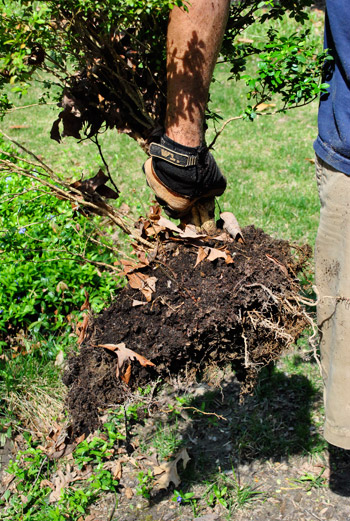 But the ones that looked like they might stand a fighting chance of survival also got transplanted in the side lot near the azaleas. 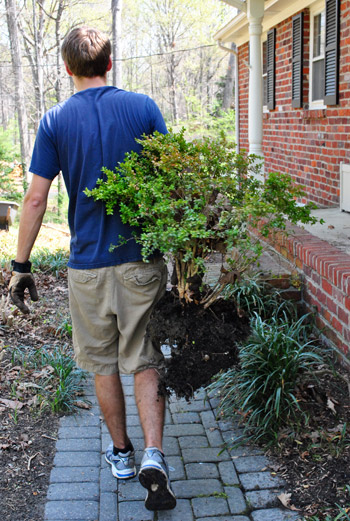 Then it was time to do something we’ll probably be doing until the end of time at this house. Digging up more of that ubiquitous liriope that abounds. This stuff was actually growing up and over the pavers – making the path look a foot narrower thanks to at least six inches of encroachment on each side. See the root system of the one below actually covering half of that paver? 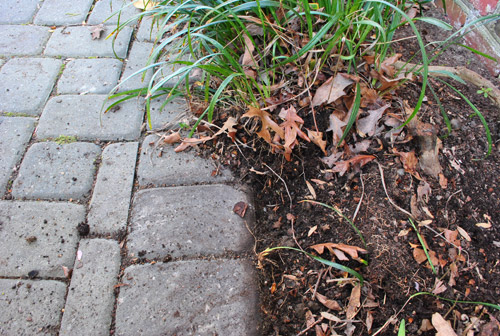 We knew digging them out would widen the path again (no more bushes or grasses trying to tickle people’s legs as they walked by), but we really weren’t expecting just how much of a difference clearing out this small bed that once housed giant azaleas and endless monkey grass would make. The porch could finally breath again! 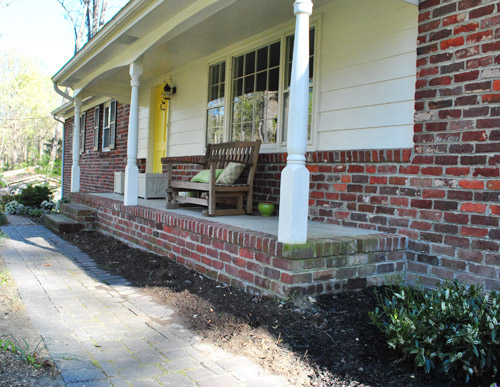 We went ahead and mulched it all the way down, just to keep weeds from springing up all willy-nilly, but we do plan to plant some small pretty flowering perennials or annuals eventually. Just holding out to find some we really like that will do well in such a narrow spot (we’re sure there are a ton of options, so we’ll just see what we like and resist the urge to try to settle too quickly on something “meh”). 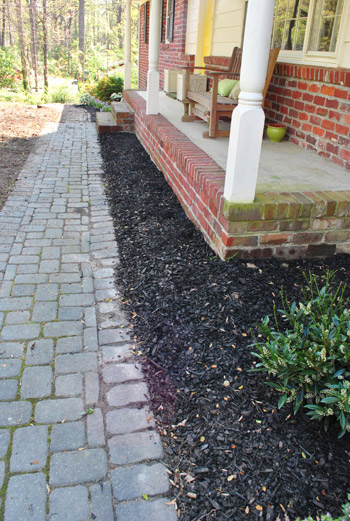 And we can’t even explain how much of a difference it made to clear out those big clumpey and crowded boxwoods that were on the other side of the path. Are you ready for the biggest landscaping difference we’ve seen this spring? Check out the path before we cleared it out… 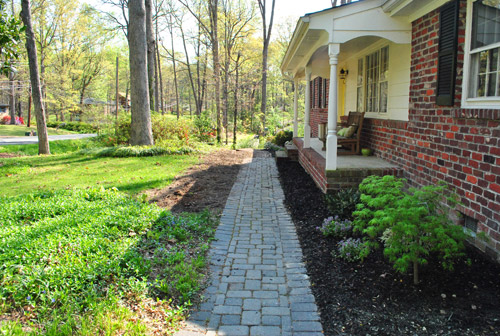 Doesn’t the path itself look about twice as wide and a lot more open? Don’t your eyes travel to pretty things, like the woods beyond the path, and the open and much more welcoming porch? We have plans to seed the entire left side of the path so that grass just comes right up to it (nothing big will pen you in, so the path will look nice and wide and welcoming). We have a ton of other areas to garden around the perimeter of the house, so we’ll appreciate just having to mow that strip of land instead of needing to plant/mulch/prune/weed another bed. So picture that big patch of brown as green as the grass beyond it. Can you see it? 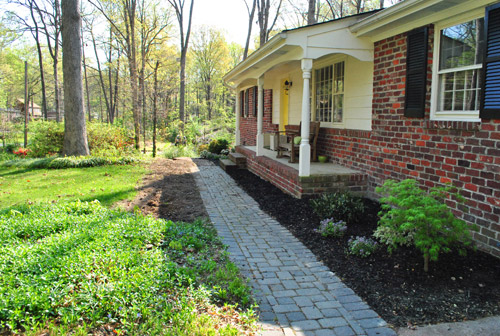 And here’s the difference from the other side. Before: 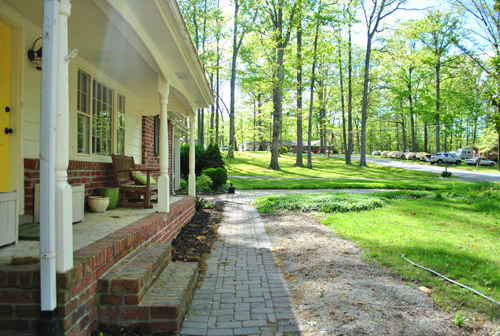 And now for some shots from a bit further away for ya. First here’s how this angle looked back when we moved into our house (what house?): 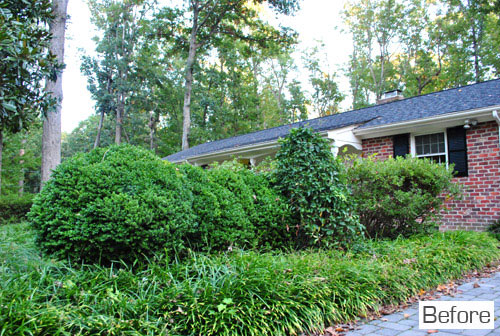 And here are how things are looking these days: 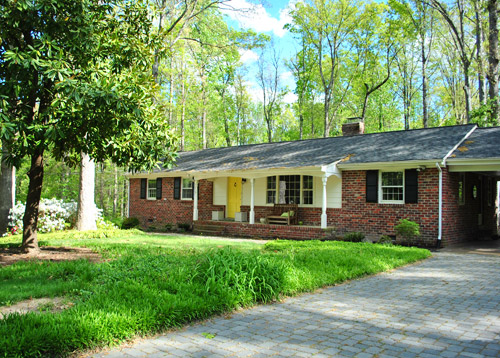 Of course we still have about 679 other things on our exterior to-do list (see more of that here) but we’re inching towards something that looks a whole lot better than what we started with.

Ah landscaping, you take a while and make our arms and back ache, but you’re worth it. 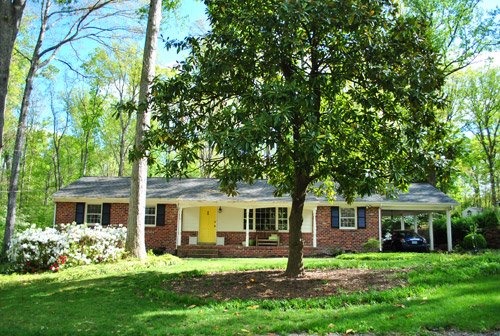 As for how long clearing the path took in total, the entire project – including the time it took to transplant things in other areas – was around 8 hours. We started it about a week ago, which is why we couldn’t show wide shots of the garden beds on each side of the porch (since that path was torn up/in progress – and we wanted to get ‘er done before taking pics from further away). That last shot from the street further emphasizes how much more we still have to tackle, but it’s definitely nice to look at the before pic to remember how far we’ve come in the time that we’ve been here. Slowly, but surely.

What are you guys doing when it comes to the path to your front door? Is it open and clear, packed with flowering plants? Full of overgrown bushes you’re planning to relocate as well? Tell $herdog all about it.