You know that part in a movie where the dorky girl rips off her glasses and throws on some makeup and suddenly she’s a bombshell? Well, our deck has already tossed its spectacles aside (i.e. we stripped off the old finish) and now it’s time for some lipstick (i.e. stain). We’re not exactly aiming for bombshell status here, but we’d settle for – I dunno – sexy librarian? I think I’m getting lost in my own analogy. 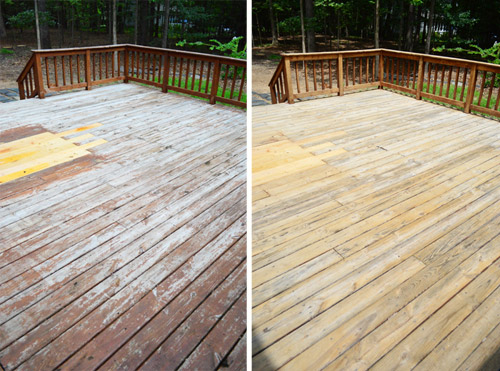 The gist is that with our deck boards cleaned, we could finally apply a new protective finish. After some discussion, we decided to use a semi-transparent stain. Both of us prefer that look over something completely solid, but we didn’t want to go as light as the toner that we used on our last deck since we thought a deeper brown tone would look nice with this brick facade. We also wanted to loosely match the previous deck finish since we didn’t strip areas that were in decent shape, like the smaller vertical rails or the lattice around the outside. And we decided to stick with Olympic Maximum Stain + Sealant because we’d had a good experience with it on our last deck (we chose it for that project last year after many folks recommended it to us). Plus, they had a color called “Russet” that looked to be a pretty spot-on match to our existing color (we brought home their color booklet and held it up against the deck railing to pick the best match).

Here are the supplies we gathered for the task: 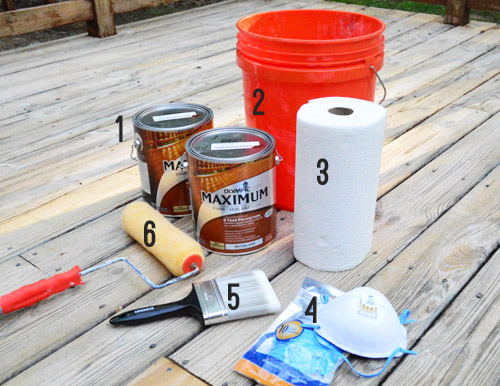 The bucket is also useful when your job takes more than one gallon because you can help eliminate color inconsistencies. Just like with paint, combining all of your tinted materials at the start of a job means you won’t be surprised by a noticeable color change if one gallon is a slightly different hue than the one before it. We mixed two gallons at first and then added each subsequent gallon as our bucket level got low. I half expected Augustus Gloop to surface for air when I stirred it, but no such luck. 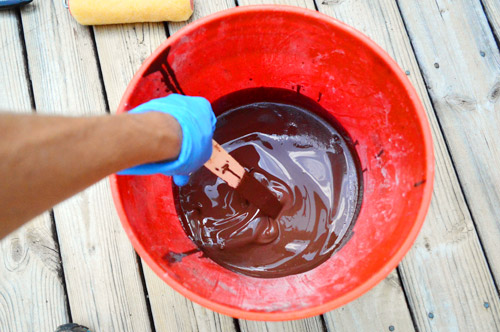 I’ll admit I was a little nervous about having trusted the stain swatch to match the old finish. We could’ve gotten a small test pot of stain to be sure before going all in on multiple gallons but Sherry was feeling confident. But we did decide to start in a low-risk area – the railing hidden on the far side of sunroom – just to be sure. Once again the lady-wife wowed me with her luck, and it matched the un-stripped-already-mocha railings perfectly. We stripped the top and the wider railing slats, so those have been re-stained in this shot, but the skinny ones are the old color. Can’t even tell the difference, huh? 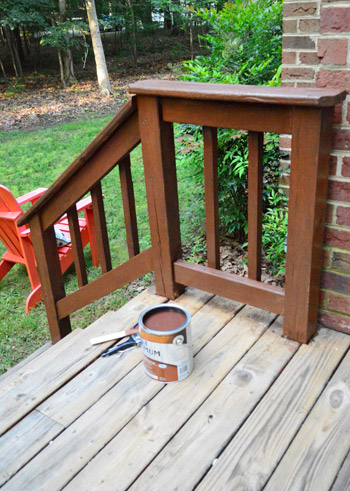 Here’s another railing that we tackled next – and this time I remembered to take a before picture of it. I had attempted to strip this railing but it didn’t come off as well as I had hoped. But the coat of stain did a great job of covering up my spotting strip-job. Once it fully dried (it’s still wet here) it had absorbed and looked even better. Almost like new. 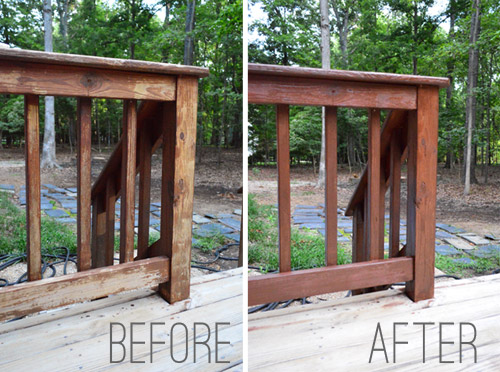 Since we had started our little test-run on the railings, we decided to go ahead and finish those first. It also made sense because we could work while standing on the deck, rather than having to wait for it to dry. It was tedious work, but with both of us plugging away at it (Clara was with my parents) we knocked all of the railings  – both the outside, inside, and tops – in about two hours. 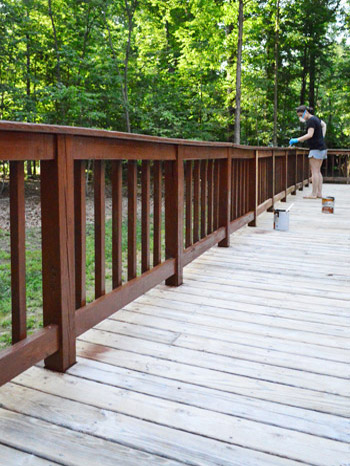 We would’ve kept going but (1) it was 10am and Sherry had to put up the morning post and (2) the sun was starting to creep over the trees. This is another product they advise against using in direct sunlight because it dries too fast and can create visible lines where a freshly stained area meets an already-started-to-dry area. Since the sun was only going to get more direct for the next few hours, we knew moving on to the floorboards would have to wait. But at least the railings were starting to look sexier. Let’s just say she’s almost all that at this point. 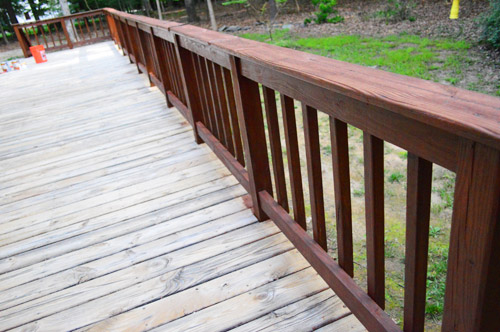 Around 4:30 the sun dropped down enough on the other side of the house that the light had finally crept off the deck floor. Clara was back home and napping, so we had anywhere from 30 to 90 minutes to tackle as much as we could as a two-person team before she woke up and threatened to slip and slide through our work zone. Because we were working fast we didn’t pick up the camera much, but the basic process involved me dipping my roller and liberally applying stain to a small area. I didn’t want to go too big at any time because we’d need to be able to reach any wet stain for the next step… 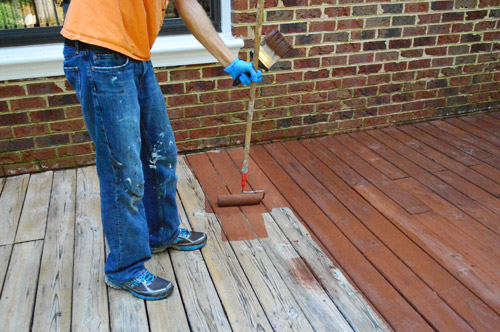 …which was back-brushing. If you remember from our last staining job, going back over the wet areas with a brush helps to even out any puddles (which could cause darker stain spots) and also works the stain into the wood better. Since we were working with older more weathered wood it was also an important step to make sure we got coverage in any small cracks. Plus, the roller didn’t do a good job of getting those between-the-board creases, so Sherry did each of those by hand along with back-brushing the top of each board that I rolled. 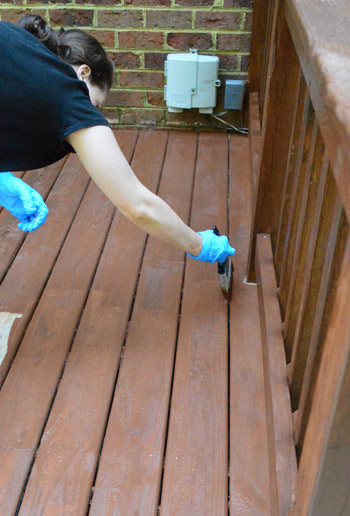 With over 650 square feet of deck to do, it was not a fast job. We got almost halfway done before Clara woke up and, rather than leave the deck half stained (and risk a big overlap line wherever we had left off) I continued on my own until the rest of the deck was done. Which conveniently was also about when it was too dark to see what I was doing anymore (so it was about a four hour job with two people for the majority of the time and me flying solo in the end). Here’s a full side-by-side of our process, which really shows how much better it looks. I’d say we achieved sexy librarian.

When we brought our furniture back out we were happy to see that the table could be placed right on the spot where the patched boards meet the old ones, so it’s not noticeable at all. The only problem? It’s looking like a larger deck calls for some more furniture. 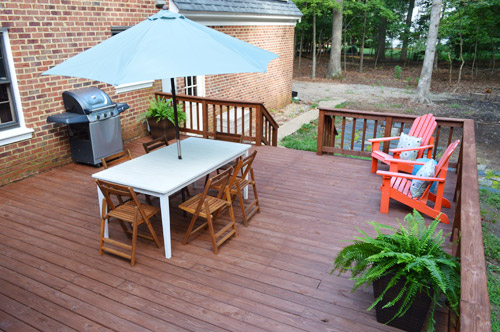 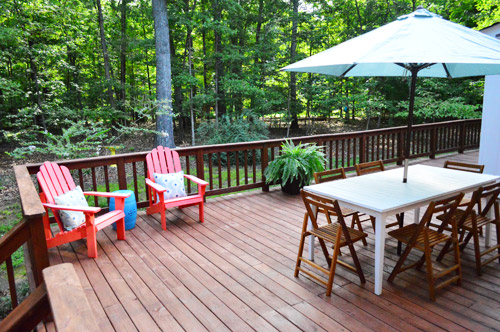 … but we think some craigslist and end-of-season sale-hunting is in our future. Especially since the entire other end of the deck is completely bare. 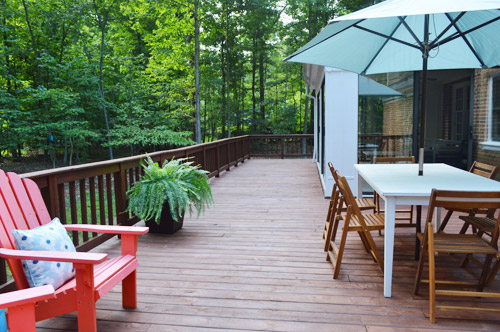 But that, my friends, is a mission for another day. For now we’re just happy to be done spraying, scrubbing, rinsing, rolling, and brushing this baby, which leaves us more time for playing, relaxing and eating on it instead. And I gotta say, as good as painting the walls of a room can feel, refreshing a 676 square foot deck feels even better. Especially when this used to be the view: 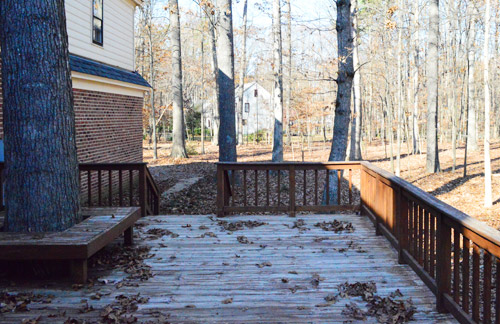 You should see us out there wolf whistling at it.