Like previous blogiversaries, we’re gonna use this week as an excuse to take a look at the business side of blogging (at least as we know it). As you’ve probably gathered by now, we never intended to start a business when we wrote our first post back in Sept 2007, nor did we ever construct a formal business plan. So this whole adventure has been a learn as we go / roll with the punches / adjust along the way / insert more cliches here kind of deal. And just like we don’t claim to be DIY experts or trained interior designers (we’re just two people with a chihuahua and a baby), we’re not about to pretend that we’re the savviest business people out there either. But like everything else we do, we’re just gonna share our experiences in an effort to help someone out there who might be trying to grow their blog… or is just curious about what we do all day. 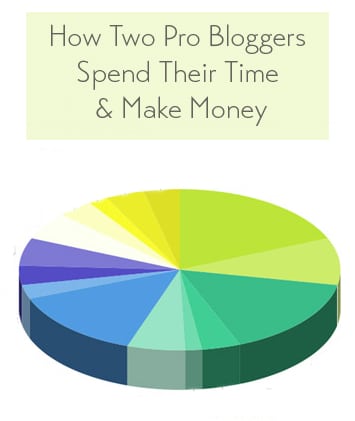 We’ve lightly touched on some of this info in past blogiversary posts, but this year we’ve added a lot more details along with some new visuals: PIE CHARTS. Oh yeah, you read that right. Sherry’s math-teacher dad is about to do the happy dance. So get your fork out and prepare to dig in.

Let’s start with a look at how we spend our time… a slice (har-har) of which was somewhat encapsulated in yesterday’s day in the life post. But this is a more global look at all the things we do as opposed to the somewhat random and always-changing things that we do in a day. Oh and to be clear, this is a look at when goes into running Young House Love (so it excludes things like parenting a sixteen month old and other general I’m-an-adult duties like cooking and cleaning). Behold, a very simplified / approximated breakdown (all the pie charts in this post are very general guesses, btw): 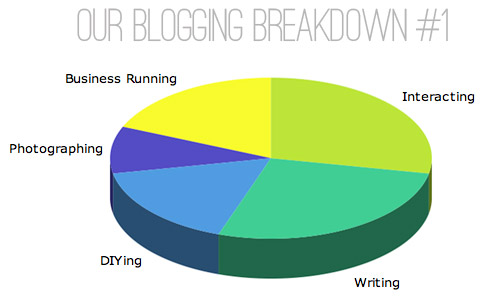 The main thing that might surprise you here is that we actually spend a very pretty small sliver of our time actually doing projects (aka “DIYing”). In fact, some weeks it feels like we barely have any more time to tackle our to-do list than we did back when we both had full-time jobs in advertising (that was pre-Clara too, so we might have had more energy, haha). Our weekends (along with weeknights after 7:30 when Clara’s in bed) are still our most productive days in terms of making house progress because the blog is “quieter” (as we say around here). So we can focus more on tasks and less on answering comments and proofing & posting posts. But that pie chart isn’t complicated enough, so…

Here’s a further breakdown of the breakdown above (yup, we broke down a breakdown) to give you a better sense of what we really do within those general categories: 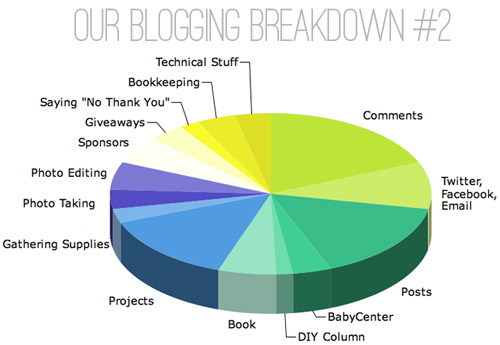 So now that we’ve taken a general look at the time aspect of running our blog, let’s talk money. Before you get your hopes up, we’re not gonna detail how much we earn. Call us old fashioned, but we feel like “how much do you make?” joins “who’d you vote for?” and “are those real???” in a our list of conversations not to be had with the entire planet (anything we don’t talk about with friends at dinner usually = off limits here in blog world). In a general sense, we like to say that we make a modest living (we’re not rolling in cheddar, especially after we pay our business-related expenses like hosting fees – which we outline at the end of this post). But we actually think is a good thing because we blog about living modestly, so it all goes hand in hand. But we’re happy to talk about where our money comes from and how that has changed over the last four years. Let’s do it.

Waaay back in 2009 we spoke on a local panel about making money blogging. At the time we sung the praises of a “multi-channel” approach to earning income from your blog. Because, at the time, we (though mainly Sherry, since she was the only full timer then) got money something like this (again, this is a very general guestimate): 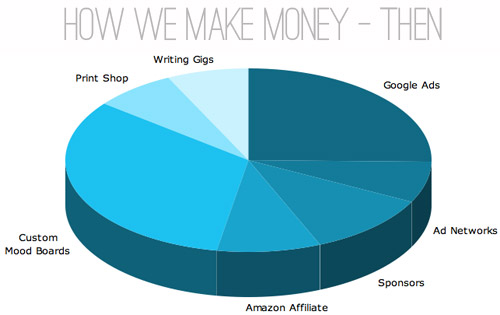 We’ll breakdown some of those terms further under the next pie chart, but let’s talk generally for a second. A few years back, despite our best efforts, money from advertising just wasn’t cutting it. So Sherry branched out and started selling inexpensive art prints that she had printed locally and shipped herself (she’s got a fine arts degree). It was sort of like being an Etsy vendor (but she created a shop page on our site to vend them instead). At that time Sherry also began offering custom mood boards to help readers with their “Design Dilemmas” (and briefly even offered smaller services like paint color advice and even short phone consultations).

When it came to pricing those mood boards out, Sherry did some for free first, just to get interest up and a few under her belt. Then she slowly raised her rate using supply & demand as the guide. After being free for a while they were $30, then $60, then $100, and slowly built up to $250 when supply/demand increased over the years (Sherry refused to sell them for more than that, even when the two per week that she would offer up would sell out within two minutes). Oh, we were also writing for Do It Yourself Magazine and our local R Home design magazine, so that’s where we got the whole multi-channel method thing from. We were doing lots of stuff to make a small income. Which was necessary because ad income alone just wasn’t cutting it (I should mentioned here that Sherry took a huge pay cut to go from advertising to blogging, but she just wanted to see it through, and looking back it was a risk that we’re so glad we took).

But now let’s look at a new pie chart. Times have changed, and luckily for the better. As our traffic grew, so did our ad revenue, which meant that we were able to spend less time on services and selling prints (both of which we discontinued after Clara’s birth in May 2010 out of sheer no-time-at-all necessity). The elimination of these services allowed for more time that we could spend focusing on blogging. In fact, while making these pie charts I noticed that our currently weekly Google Ad income is larger than what we pulled in our entire first year via Google. This is not to indicate that we’re making an enormous amount now, but rather that what we started at was so laughably small. Hopefully this encourages anyone who is currently earning a few cents a day to stick with it for four years and 2,000+ posts (if you love it I guess, haha, don’t stick with it for the uncertain years-down-the-line dividends). So now our income sources look more like this (this chart might be completely inaccurate since we didn’t really calculate things so it’s not made up of actual percentages – it’s just representative of the general shift in our income sources): 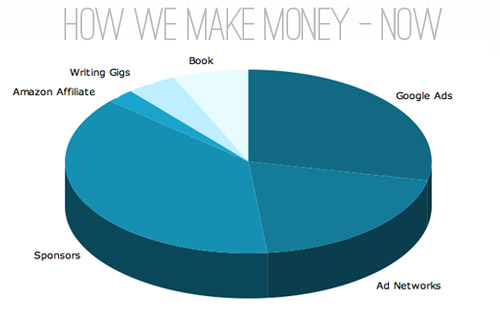 It’s still “multi-channeled” in a way, but the majority of the channels are advertising-based. We still keep our income split across different sources so that if one falters, we aren’t sent into a panic. And in case you’re scratching your head at any of those labels, here’s a quick breakdown:

But of course, no business is without expenses. And it easy to assume that blogging is a free endeavor (after all, it was when we started in ’07, we even had one of those free urls with wordpress.com at the end of it). But as our traffic and business grew, so did our costs – such as:

If you want more info on the expense side of blogging, we actually wrote about it in more detail last year. But that’s enough out of me for now. Hopefully “peeling back the curtain” helped – whether it’s to use this info as you plan your own blogging business (or other somehow-related venture), or to just help you better understand what goes on behind the scenes around here. It’s certainly a lot more than just doing projects and writing about them, but there’s nothing else we’d rather be doing. Seriously, we’re completely amazed that we ended up “here” and our cup runneth over with gratitude. In fact a pie chart of our gratitude would be 101% full. And now as anything with charts should end – who else is hungry for pie?