Every once in a great while we’re given the opportunity to share something that could actually help the planet even if just one in ten people who read our blog put it into practice (like toting reusable shopping bags or collecting rainwater in a barrel). And this, my friends, is one of those times. Please feel free to pass this info on to your friends and family members!

And who do we have to thank for this wealth of information that just might change the world as we know it (or at least change your impact on the planet from this day forward)? Why none other than my über intelligent little brother Dan (also affectionately known as Almost-Doctor Dan): 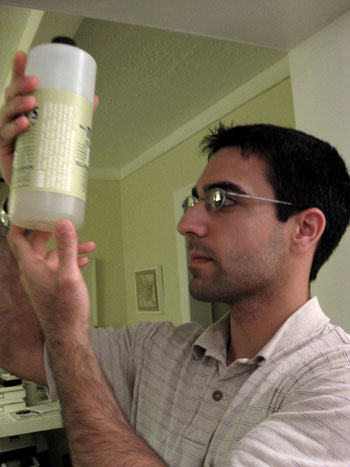 Remember when we introduced him here (and revisited his giant brain here)? As a little refresher, he went to Cornell and graduated with the highest GPA of his entire graduating class (a 4.21 if you’re wondering). Yup, out of all of the kids in Cornell’s College of Agriculture and Life Sciences, he was the Valedictorian. Now he’s a graduate student at Columbia with a Master’s degree under his belt, steadily working his way up to his Doctorate in chemistry with a full scholarship from the National Science Foundation. Not only do they pay for his education but they actually pay him a stipend for rent and food- all in return for wearing a lab coat almost 24/7 and messing around with molecules and polymers all day. Sweet deal huh? Serious Einstein stuff going on.

Anyway, so on a recent phone convo we got to talking about the impending flu season and all the gross germs that seem to be swirling around more and more these days (thanks so about a million media stories on the subject) and Dan shared something so unbelievable that we just had to pass it on. In short, we learned that the idea of antibacterial soap is a marketing ploy that’s actually terrible for the environment. Here’s Almost-Doctor Dan to break things down for us:

What makes most “antibacterial soaps” antibacterial is a chlorinated aromatic compound called Triclosan. By itself this compound doesn’t appear toxic to humans, but every time you wash your hands this stuff is ending up in wastewater and eventually making its way into the environment. Think about how quickly you go through a bottle of hand soap and realize that every last drop of it ends up going down the drain. You’ve got millions of people across the country using this and it’s ending up in lakes, streams, oceans etc (where it’s not particularly biodegradable by the way).

If it were really keeping people from getting sick, perhaps an argument could be made that this is an acceptable consequence, but it really isn’t necessary! Bacteria and viruses can’t penetrate healthy, intact skin. The only way that pathogenic bacteria on your hands can make you sick is if you eat something or touch a mucous membrane (your eyes, nose, mouth, etc); up until that point they are basically harmless and loosely attached to your skin.

And to remove them from your skin before you eat or touch a mucous membrane, any soap that you use will not only dislodge bacteria from your hands but will likely kill it as well by disrupting its cell membranes. This is why the whole idea of an ‘antibacterial soap’ is just plain silly – any type of soap in and of itself will cleanse your hands of bacteria. Unless you work in an environment that requires truly sterile hands (a hospital for example) the use of these antibacterial soaps is a waste of money and resources as well as a bane to the environment. 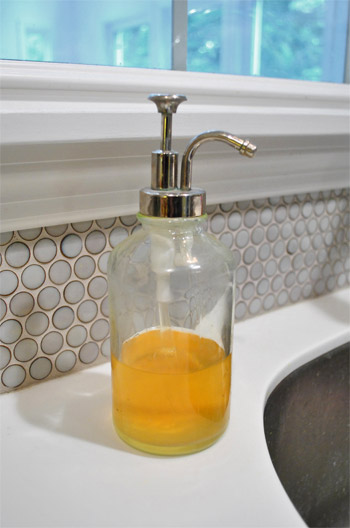 Is that not the most interesting thing you’ve heard all day? Well, we thought it was, and we couldn’t believe that companies are slapping the old “antibacterial” claim on their bottles to encourage people to purchase them when in fact they’re doing the world more harm than good (and regular old soap and water does the same thing without the environmental harm!). By no means do we mean to be preachy, but we just had to pass this info along in the hopes that even a few other households might adopt an anti-antibacterial approach and keep tons of damaging pollutants from permeating lakes, rivers, and oceans over time (can you imagine how much of a difference this new approach could make if just ten people changed the type of soap that they purchase over the next ten years?).

We also got a letter from another Almost-Doctor (Kristin who’s currently getting her PhD in Germany) who actually works with bacteria on a day-to-day basis. Here’s what she has to say on the subject:

Bacteria, in general, live nearly everywhere. The vast majority is harmless, some are even beneficial. Even when you wash your hands with antibacterial/disinfectant soaps, the remaining bacteria grows back to their normal number within hours or a day. And as I mentioned, some bacteria are actually beneficial. For example, microbiologists who have to use antibacterial disinfectants on their hands several times a day often suffer from skin damage because the beneficial bacterial skin flora is destroyed (and skin damage can make you more susceptible to getting sick while healthy intact skin is usually impervious to germs).

When cleaning we should think of bacteria as a normal part of our environment, not as something that should be completely destroyed. It is impossible to get rid of bacteria completely, and there is no need to. Too much antibacterial disinfection in households can even become dangerous – the more disinfectants that we use, the higher the possibility is that strain of bacteria will become resistant. In addition, some scientists think a too clean environment facilitates allergies – your immune system has to be trained constantly.

Water with soap kills or washes off 99% of all bacteria. If you do not want to use too much soap, or any at all, you can even use a microfiber cloth with water only – the small fibers will collect most of the bacteria and the towel can be washed in hot water to naturally disinfect it afterwards (which destroys the microbes). These two methods of hand washing are completely sufficient for a normal household with healthy people.

So there you have it. Two insanely smart science-minded brainiacs on separate continents who agree on one thing: lose that antibacterial stuff and wash you hands thoroughly with good old fashioned soap and water to kill germs just as well and do a serious solid to Mother Nature while you’re at it. John and I are big fans of Dr. Bronner’s Pure-Castille Soap (the almond scent is our favorite). It’s sold at Target among other places and it’s made with organic oils and even stored in a 100% post-consumer recycled plastic bottle. Basically, if you’re looking to replace your antibacterial soap and want some extra credit, this stuff is about as pure as they come (it’s certified fair trade and plant-based so it won’t hurt lakes, streams, rivers and oceans in the least). And so ends our little soap diatribe. Here’s to our health this fall! And the planet’s health too.

Need more of a reference than two almost doctors? Check out what the Center For Disease Control has to say on the subject here and here (hint: they agree with the braniacs above).